The 1984 Gallup Book That Predicted Terrorists Would Hold NYC Hostage 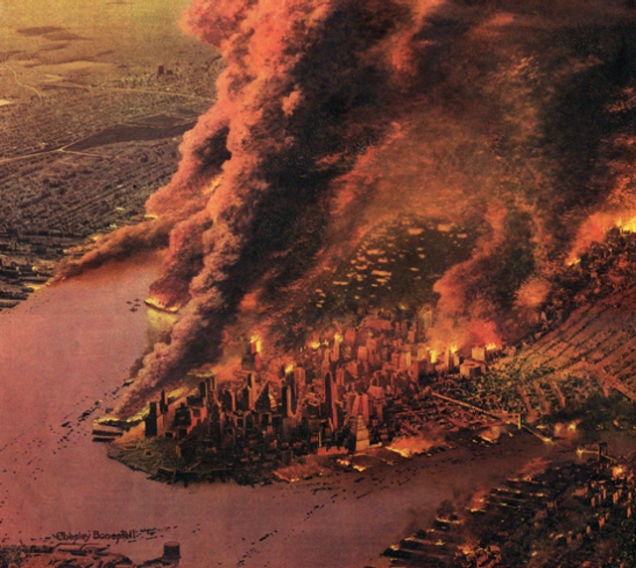 Some kids today are being told that what happened on September 11, 2001 was unimaginable. But that's simply not true. We had imagined it — or something like it — for years, in about a thousand different ways.

Creators of 19th and 20th century fiction loved to destroy New York. There are few things more American than obliterating New York on the page. So when George Gallup Jr (son of the founder of the Gallup polling agency) opened the first chapter of his 1984 book about the possible futures of America with terrorists atop the Empire State Building, he wasn't breaking new ground. But it doesn't make his story any less chilling.

Below, we have an excerpt from the 1984 book Forecast 2000 by George Gallup Jr. He admits that his vision about terrorists taking New York hostage is "rather dramatic" and "reminiscent of various books and television specials that have come out in the last few years." But he insists that just such a future is coming. Sadly, he wasn't altogether wrong.

"I'm convinced from evidence that has been accumulating in our Gallup surveys and in the news media that this is just the sort of future we'll surely be facing — unless we begin immediately to take certain countermeasures," Gallup wrote. Here's that future in vivid detail:

The year is 1997. The place is New York City. It's a warm, sunny spring afternoon. Office workers are just cleaning up cups and papers from their lunches in Central Park, Bryant Park, and other favourite outdoor spots.

But then the unusual big-city tranquillity is shattered by news reports that begin to come through on portable radios scattered around the grassy patches. A terrorist group of some sort has taken over the observation deck on top of the Empire State Building. The terrorists claim they have set up and armed a nuclear device. It's quite a big bomb, they say — more powerful than those dropped on Hiroshima and Nagasaki.

As pedestrians gather in steadily growing clusters around the available radios, more information pours in: The terrorists are connected with some extreme anti-Israel faction. They have chosen New York City as their target because it has a larger Jewish population than any other city in the world — and also because much Zionist activity is centred there.

Their demands are nothing short of staggering: a $US1 billion extortion payment... freedom for scores of named terrorists in prisons around the world... a guarantee of the political division of Jerusalem and the establishment of a sizeable chunk of Israeli territory as a Palestinian homeland... their group is to be given absolute control over the designated portion of Israel...

The demands go on and on, and they're topped off by a seemingly impossible deadline: The requirements must all be met by high noon the following day. Otherwise, the device will be exploded, and all of Manhattan Island and much of the surrounding area will be seared to the ground. Moreover, radiation will make the land for hundreds of miles around the explosion site uninhabitable indefinitely.

As the news of this threat spreads around the city, the reactions are varied. Most people stand or sit around just listening to the news. Some think the whole thing must be another Orson Welles joke — a phoney broadcast designed to simulate reality. After all, there have been many other such dramatic programs in the past, and this is certainly just another to draw in a wide listening audience.

Others accept it as a real event, but they're sure the terrorists are bluffing about the bomb. Still others are optimistic for other reasons: For example, they're certain that one of the government's antiterrorist teams will either overpower the offenders or negotiate a settlement of some sort.

A number of people are too stunned to move. A few panic, and either break down in tears or start running to their apartments to gather their valuables together with the idea of getting out of the city.

As the day wears on and night falls on the city, it becomes apparent that the broadcasts are no joke. Growing numbers of people — many more than the commuter lines to upstate New York and New Jersey can handle — try to get out of the city.

Huge traffic jams build up, and there seem to be an unusual number of auto breakdowns and flat tires — more terrorist activity? people wonder.

As the night wears on, the terrorists hold firm to their demands, and the sense of panic rises. What if they're serious? What if they really plan to explode that bomb? Increasing numbers of usually relaxed citizens begin to decide that perhaps they'd better waste no more time getting out of the city.

But many don't have cars — a necessity in most cities, but not in Manhattan because of the extensive public transportation system. And those who do have cars find they can't even get close to the tunnels and bridges that lead out of the city. The one exception is Long Island — but who wants to get stuck out there if a nuclear bomb goes off in Manhattan?

Daybreak reveals many strained, haggard faces on the city sidewalks and in the jammed-up autos on New York City thoroughfares. There seems to be no escape from this dilemma.

One attempt to overpower the terrorists has failed, with several attack helicopters shot down. Finally, high noon arrives. New Yorkers sit glued to their radios and TV sets, waiting with bated breath. The negotiations have broken off, but there's still hope that the terrorists will make some sort of counteroffer. That's the way this sort of game is always played, and most people believe there has to be a solution. After all, what's the point in a bunch of terrorists blowing up an entire city when they're in a position to get something, even if it's not everything they have asked for?

The lull continues through four minutes after twelve, then five minutes. A growing number of listeners and viewers begin to relax. Something good must be happening. Then, the blinding light flashes into every dim corner of the city, and the roar follows almost simultaneously. But no one has heard the roar because the searing heat has destroyed all life.

Gallup died in 2011, so he was certainly around to see the terrorism of the 1980s, 90s and obviously 2001 unfold. Terrorism (perpetrated by both foreign and domestic actors) has been a part of American life for decades. But we want to believe, however stupidly, that it can't get any worse.

We often use fiction to grapple with the difficult issues of the past, but it's in futurism where we struggle with the line between implausibly horrendous and the horrendously implausible. With each new way that writers concoct to destroy New York, we are in some ways hoping that perhaps this will be the impossible. The history of futurism shows us that it rarely is.

Picture: Scanned from the August 5, 1950 issue of Collier's magazine