Steam Is Getting A Massive Overhaul 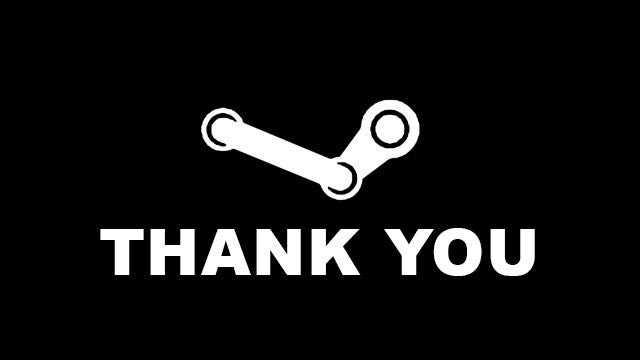 Valve is changing Steam in a big way, overhauling the front page and adding some brand new features that will drastically change the way we find and buy PC games on the ubiquitous digital store.

The revision — which Valve is calling the Steam Discovery Update and which goes live today — will implement a number of big changes including a revamped recommendations system, a queue in which you can swipe through new games based on what you've played and liked before, and a new program called Steam Curators that will allow anyone to take the role of tastemaker, recommending games to the public and accumulating followers based on their tastes. 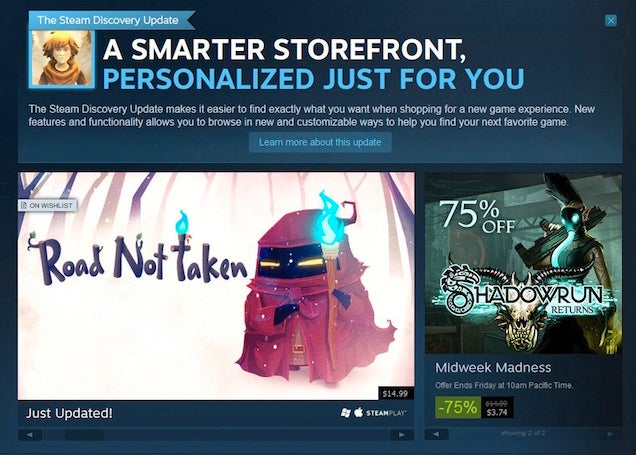 This is Valve's swing at making Steam more manageable. It's necessary at a time where hundreds of PC games are developed, greenlit, and released every year, from big-budget shooters to indie point-and-click adventures. Customers have found it difficult to filter Steam's massive library, and some have asked that Valve do a better job of curating and recommending what people might want to play. Right now, it's tough to discover cool new games on Steam. Valve wants to change that.

"We have made great efforts to increase the number of titles we can publish on Steam, which means more choices for customers," Valve UI designer Alden Kroll said in a press release. "This update introduces multiple features and functionality to help customers explore Steam's growing catalogue and find the games they are most interested in playing."

For starters, there's the new Steam Discovery Queue, which looks like this: 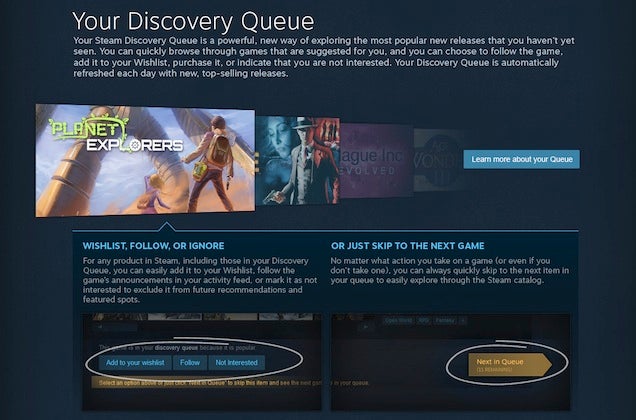 You'll be able to flip through the queue and discover new games based on what's selling well, what you've played before, and what Valve thinks you might be interested in. You can add each recommendation to your Steam wishlist, follow it, or ignore it as you click through a list that Valve says will be repopulated every day.

"The Discovery Queue is heavily weighted toward highlighting titles that are new top-sellers, but does also try to prioritise the titles in that range that are closer to titles you've recently played and to those in your library," said Valve's Kroll, who is heading up this project. I'd asked him for more details about the algorithm that drives this new feature.

"The Queue is really more about making sure you can see the popular things that you haven't seen before," Kroll said. "And you can use it as a way of browsing through everything in Steam if you really want to make sure you haven't missed anything."

That's the big theme here: Valve wants to make sure you're not missing anything. That's why they added the Discovery Queue, and it's why they're offering new customisation options for your Steam homepage: you'll be able to filter out games you already own, for example, so you can open up your wallet and buy even more. 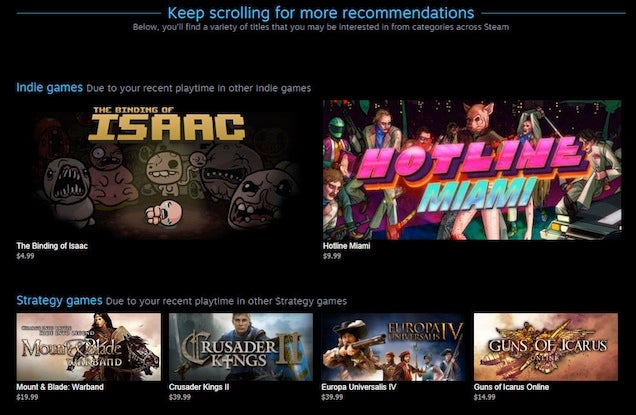 "Recommendations are only really possible because of the relationships we can identify between games as a result of user-applied Steam Tags," Kroll said. "A large part of the recommendation system looks at the tags applied to games you've been recently playing and matches that up with other games that have a high frequency of similar tags. There is a bunch of nuance in how various tags are weighted depending on popularity, frequency, and so forth, which will certainly be iterated on as we get feedback from customers."

The most interesting addition in this massive Steam Update may be the curator system, which will allow any individual or group to start recommending games to what could eventually become a massive audience. Anyone can sign up to be a curator, which in this new Steam landscape essentially means "a person who recommends games to people." 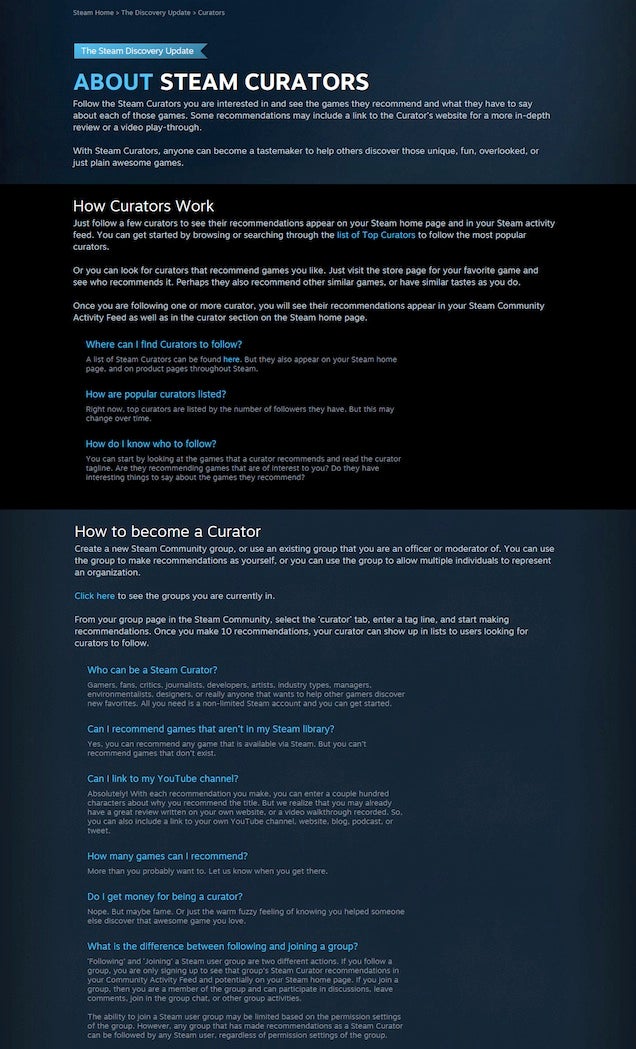 In true Valve fashion, this is a unique way to let Steam users both feel engaged and do free work for the company, not unlike Team Fortress 2's devious hat system (although at least that can make you some money).

Curator pages could make for a brilliant system, though — and it's a smart strategy to prevent Steam from turning into the wild west that is the iTunes App Store.

Here's what a Steam Curator page could look like: 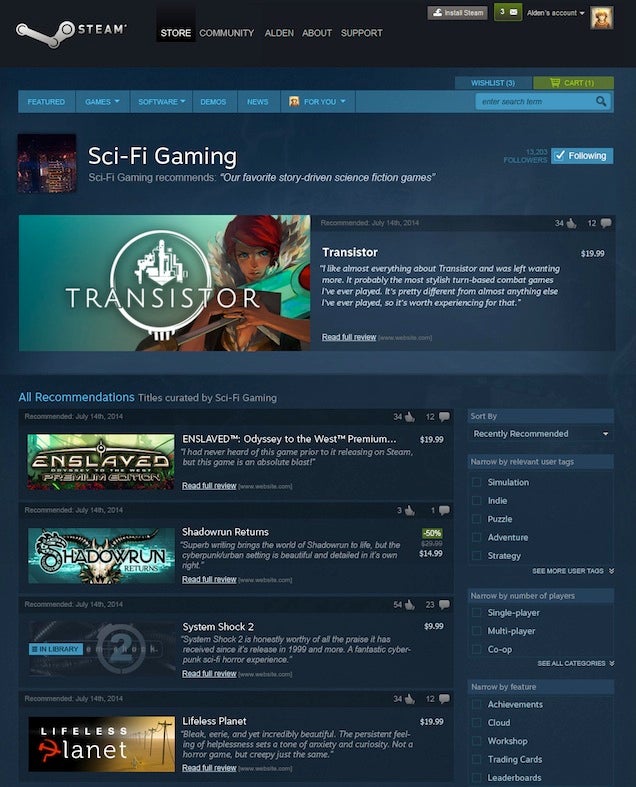 Of course, this sort of system could lead to questions of influence and trust, as video game publishers begin courting the most popular curators in hopes of gaming the system. What happens if a video game developer or publisher tries to pressure the big curators, or offers money in exchange for good recommendations?

"There are always risks," said Kroll in an email. "We will be monitoring this to make sure folks are not abusing the system."

Kroll didn't elaborate, but the thought is at least a bit worrying — a curator system like this seems susceptible to all sorts of shady behaviour, and without proper safeguards in place, who knows what could drive the most popular recommendations on this new Steam?

Still, this new Steam update brings with it the type of features that users have been requesting for years: more curation, more discoverability, more cool games. It could now be even easier to find the next big indie gem or under-the-radar hit on PC. That's a big win for everyone.

Jody Serrano 24 Feb 2020 3:58 AM
The famed DIY rocketeer “Mad” Mike Hughes, who in 2018 successfully launched himself more than 1,800 feet into the sky in a homemade rocket, died on Saturday in a tragic accident. To the end though, it can be said that he passed doing what he loved to do: launching rockets.