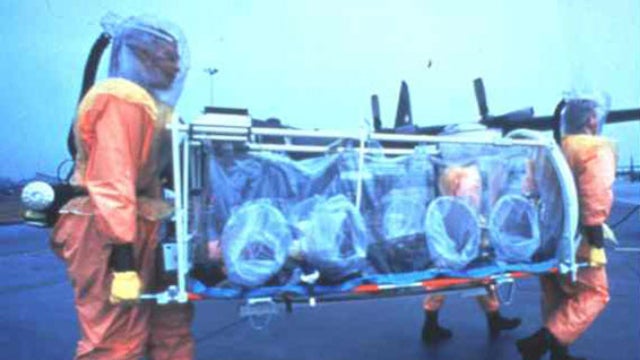 When doctors are stricken by the infectious disease they are fighting — the recent and ongoing West African Ebola outbreak, for example — you can’t very well stick them on a commercial flight back to the states for treatment. Instead, highly infectious disease (HID) patients must instead be transported under complete biological isolation inside one of these portable, personal clean rooms.

For a long time, the Air Transportable Isolator (ATI) — originally developed in the 1970s by the British Royal Air Force’s Infection Prevention Control Team — was the only available means of moving HID patients while minimising the risk of spreading the infection. Now, in a post-SARs, post-Bird flu world, private contractors have expanded on and enhanced the design.

In America, transportation using this devices was provided by the US Army Medical Research Institute of Infectious Diseases (USAMRIID) at Fort Detrick, Maryland. A rapid response team there was designed to handle not just conventional contagious outbreaks like SARS, Ebola, or Hemorrhagic Fever in exotic locales, but also to respond to any bioterrorism attacks on American soil.

Per the CDC, every step that could be taken to minimize the spread of infection needs to be. The aid workers were clad head to toe in hazmat suits while the isolation tubes themselves worked like miniature surgical suites:

Maximum biological containment is designed to prevent transmission of highly hazardous pathogens and is accomplished in two steps. First, the health-care worker wears an impermeable suit consisting of a lightweight polyvinyl chloride (PVC) coverall, a separate hood, and vinyl boots. A HEPA-filtered respirator powered by a rechargeable battery supplies air under positive pressure for breathing and cooling. HEPA filters are certified to remove 99.7% of particles 0.03 µm to 3.0 µm diameter; each filter is tested with particulate aerosol challenge studies before delivery. Air enters at a rate of 170 L/min through an intake port near the top of the hood and exits through an exhaust valve at its base. Two-way radios permit communication between team members and patients. The suit and respirator ensemble has been tested by the manufacturer by particulate aerosol challenge and meets the standards of the National Institute of Occupational Safety and Health and the Occupational Safety and Health Administration for working in environments with respiratory hazards.

Second, the patient is isolated within a sealed container under negative air pressure maintained by a battery-powered HEPA-filtered ventilation system providing five air exchanges per hour. Two isolators are used: the stretcher isolator, a lightweight unit for initial patient retrieval, and the Vickers aircraft transport isolator (VATI), a larger unit for definitive transport and in-flight care.

The design and construction of the isolators are similar to that of transparent flexible PVC isolators for gnotobiotic animals in biomedical research; the isolators were adapted both for in-patient and transport use. Challenge studies have demonstrated the efficacy of containing aerosolized T-2 bacteriophage during both hypobaric and isobaric conditions. The HEPA filters are certified to remove 99.7% of all particles 0.3 µm to 3 µm in diameter. Isolators have been used to treat in-patients with suspected Ebola, Lassa, and Marburg hemorrhagic fevers. The utility and safety of these isolators for in-patient care have been questioned, and their use in hospitals is not recommended. However, transport isolators, the only available technical means of reliably maintaining airborne isolation in a military transport aircraft, have been successfully used for the aeromedical evacuation of patients with suspected Ebola fever and suspected and proven Lassa fever.

These isolators also included gloved ports so that aid workers can interact with the patient as well as general “docking” ports that enabled the crew to provide the patient with food and supplies like oxygen tanks or IVs without breaking containment. The USAMRIID, which used the units, operated between 1978 and 2010, when the unit was disbanded and its work taken over by the USAF’s Critical Care Air unit.

Today, these types of devices are still used by both other government agencies as well as a number of independent medical flight services and are being actively employed throughout West Africa to evac Western doctors who contract Ebola. [Scientific American – RAF – CDC – Wiki]