I work from home. My home is a small apartment in San Francisco in a building that's been around since 1917, and my "office" is a butt's-width section of a used IKEA sofa I bought off Craigslist a few years back. I recently had the opportunity to spend a workday rolling around town in a brand new Bentley Mulsanne — a car that's longer than my studio apartment* and costs more than some houses. I blogged from a butt's-width section of the backseat, the ultimate mobile office. Here's how it stacked up to my regular digs.

The Mulsanne is an impeccably refined beast of a ride — the highest of the highest-end. It's huge; like, 5.4m long huge from bumper to bumper. (*For reference, the single "room" in my flat — not counting a mini-kitchen and bathroom — is 4.6m at a stretch). The car's also expensive; like $US300,000 expensive before customer customisation, and they're all customised. The Mulsanne is every single thing about the word "luxury" embodied in one motor vehicle. The word "car" almost seems crass in relation to this thing.

Would my small studio also seem crass in comparison? Probably! But one of the best things about being a remote employee or freelancer is that with a computer and Wi-Fi you can get down to business from pretty much anywhere . So on a sunny Wednesday afternoon, chauffeured around the city by a dark-sunglass-wearing driver named Jaime and the Bentley PR rep, Lauren, I experienced an echelon of high class that I have never known before, and will likely never know again.

The plan was to grab a quick bite, hop online, and do a Skype interview with Darren Day, senior interior designer of Bentley's Continental Range. These are all things I'd conceivably do on a normal day. But this was not a normal day.

First off, I would not be in pajamas, as per usual. I contemplated wearing heels and a dress but settled on a shower and got cleaned up for the occasion. Here's what automotive office looked like it rolled up in front of my place on Mission Street. 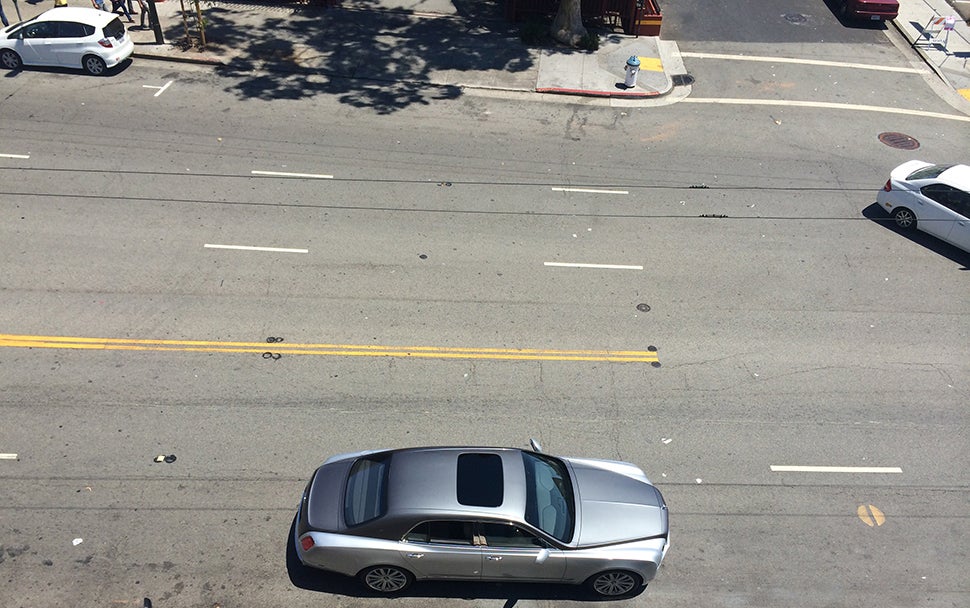 I pretty much skipped down the four stories of steps to the ground-level front gate where it was waiting, double parked and positively gleaming. I was strangely nervous, in an "I'm not worthy" kind of way. 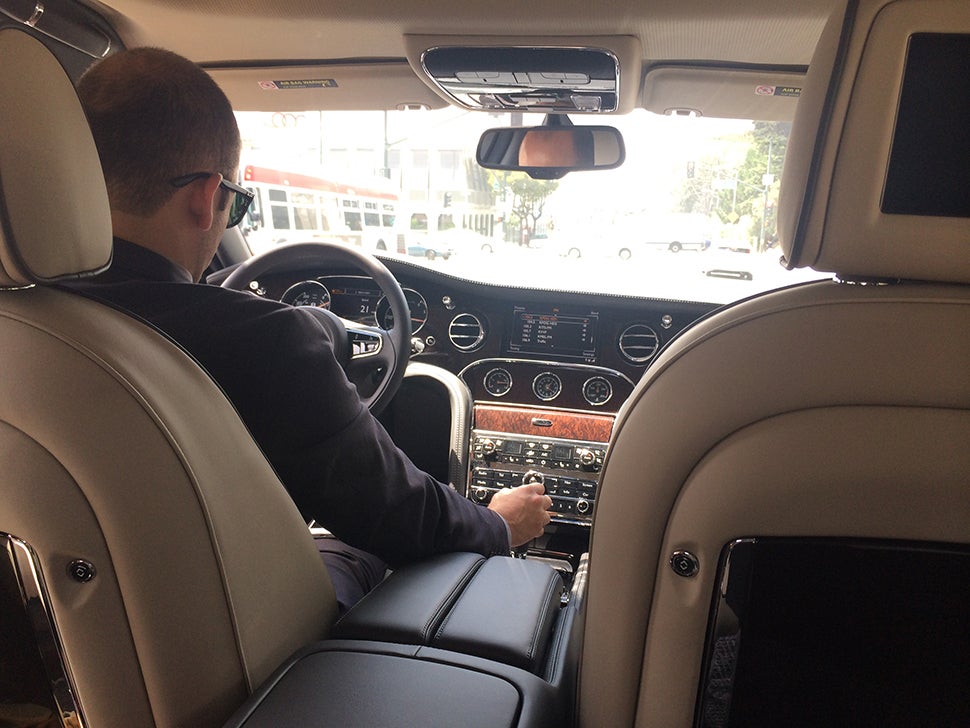 The first thing I noticed about the car is that it is solid. This is not to say it feels overly heavy, or bulky (although, as I previously mentioned, it is a gorgeous monster). It's just that there's no rattle; only hum. It's a uniquely grounded feeling of extreme lightness. A naturally lit, scenic-viewed "living room on wheels", if you will. Or at least that's how Day described it, and I kind of have to agree. Because it is also comfortable. Plenty of legroom. Not a bad place to hang out for a while.

It felt funny to hop in the back when there was no one in the passenger seat, but as Day later explained, that's totally normal; the Mulsanne was specifically designed to be both driven, and driven around in. This was just how the other half lives.

I strapped in and we started moving. I was coffee-less, despite the fact that there was, in fact, a standard cupholder; but I did come prepared with a bottle of Moet and a couple of Tecates to stash in the backseat champagne cooler — with space enough for two bottles and custom flutes, natch. 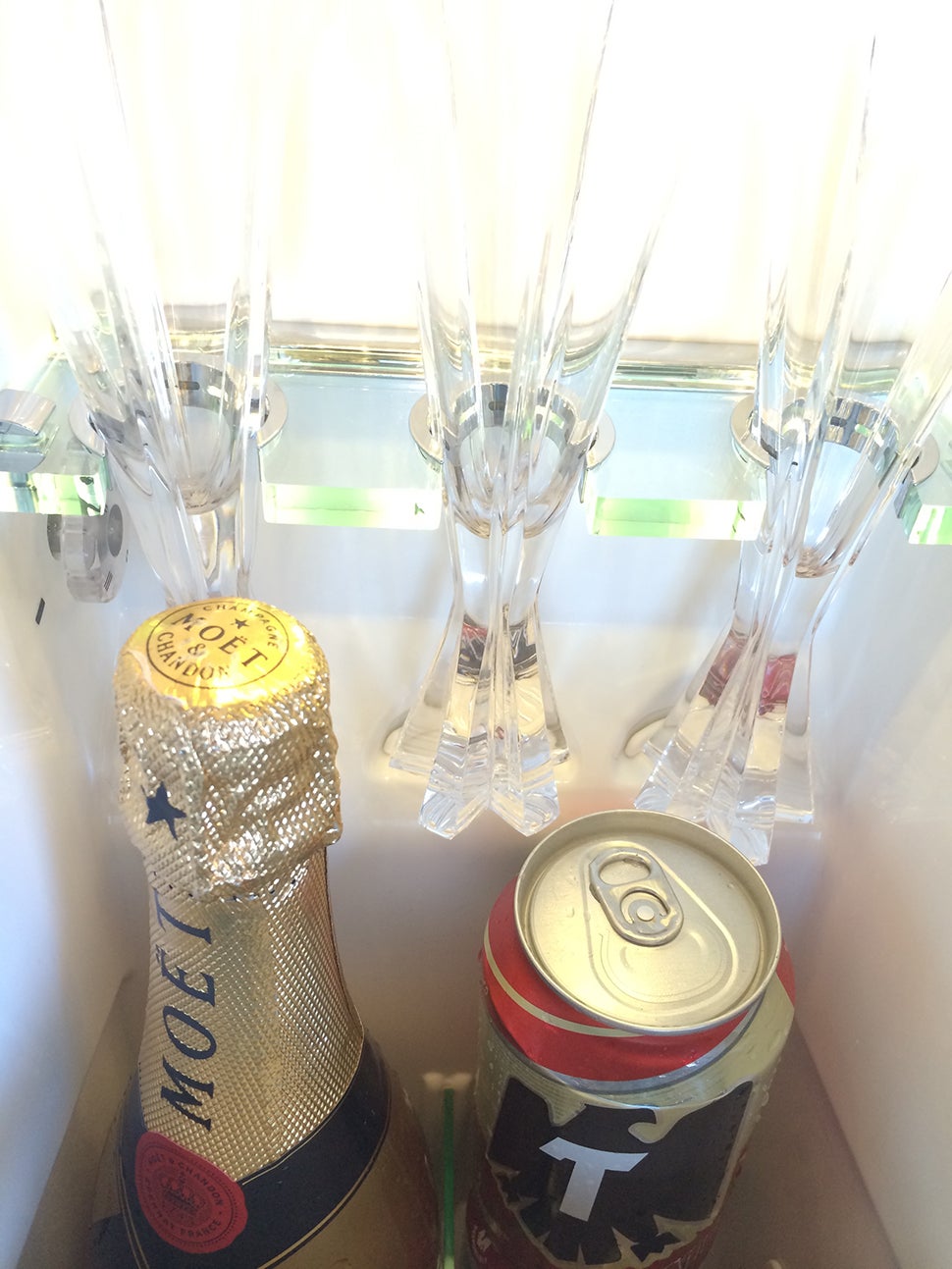 We drove to the outermost Outer Sunset to grab a quick bite at Outerlands. The fact that it was a weekday lunch meant we didn't even have to wait for a table, but I pretended that it was because they saw us cruise up and scrambled to free a prime spot immediately. While we ate, and I watched through the window as some folks did double takes and pulled out their phones for a quick snap.

Then it was time to get down to business — chatting with Day while zooming around. At home, I've got high-speed Comcast; the Bentley Mulsanne is its own travelling hotspot. 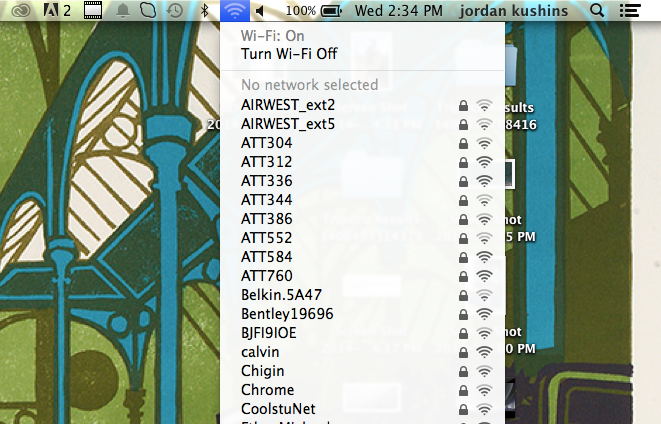 There was an iPad holder built into the seat-back tray table which I used to connect via Skype, but all my questions were on a doc on my own computer so had a somewhat ridiculous multiple-screen situation going. 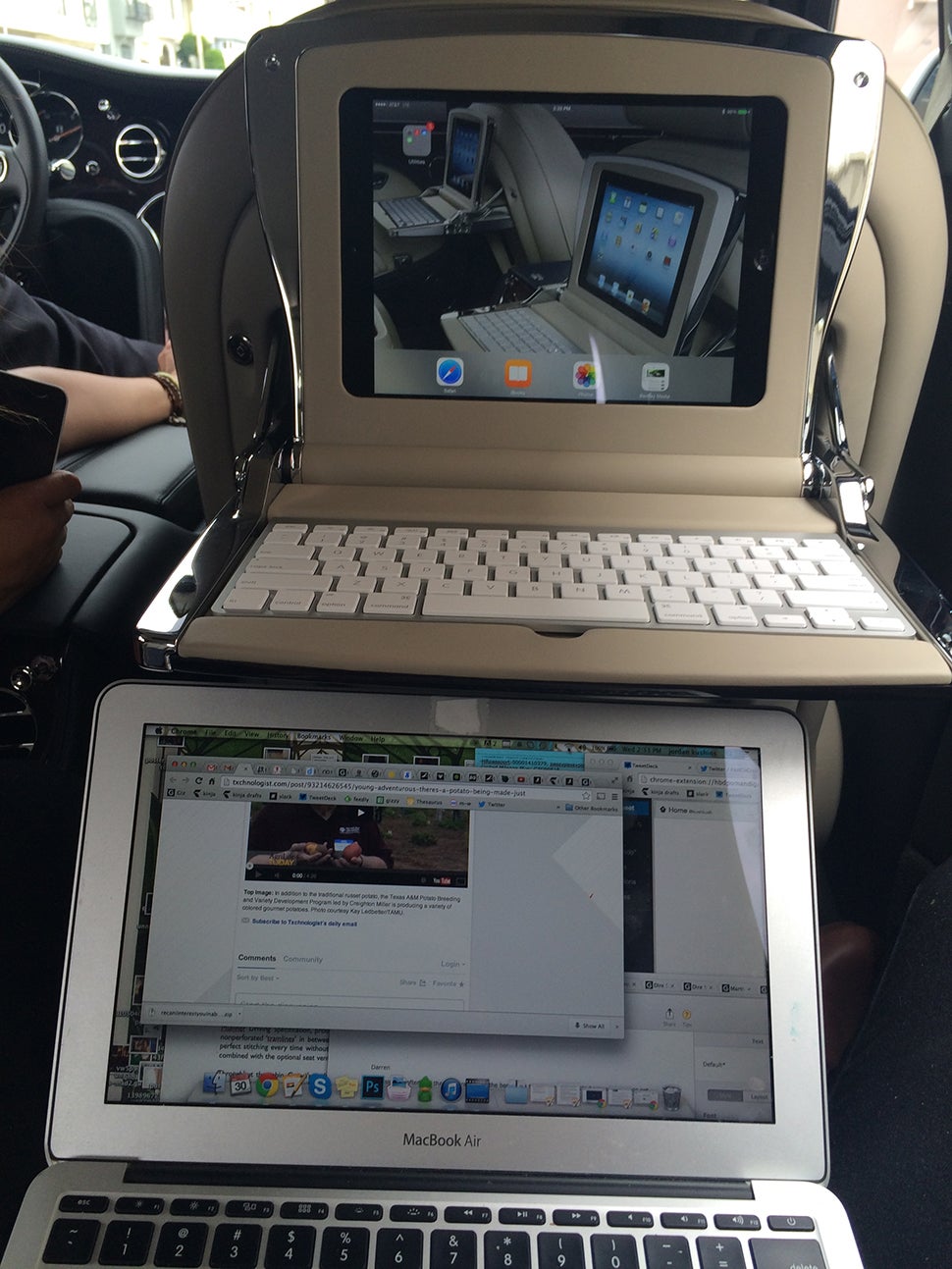 Day, predictably, really really likes his job. "I was into cars from a very very early age," he said. "I loved making things, and loved drawing." Automotive design allowed him to combine both into a profession, and now he works at a company with the absolute tippy-top resources to work with, both with regards to materials and production methods. Tech advances also play a major role in how these vehicles come together, and the team strives to keep a balance between two unique kinds of precision: mechanical and hands-on.

Take the steering wheel: machines scan the hides to ensure that only completely unblemished pattern pieces are sliced from the swathes, but craftspeople stitch those together and fit them on. Or the veneers: "We have expert who go out and look for wood that meets our requirement," Day says, and then the marquetry is mirror matched for exact alignment. 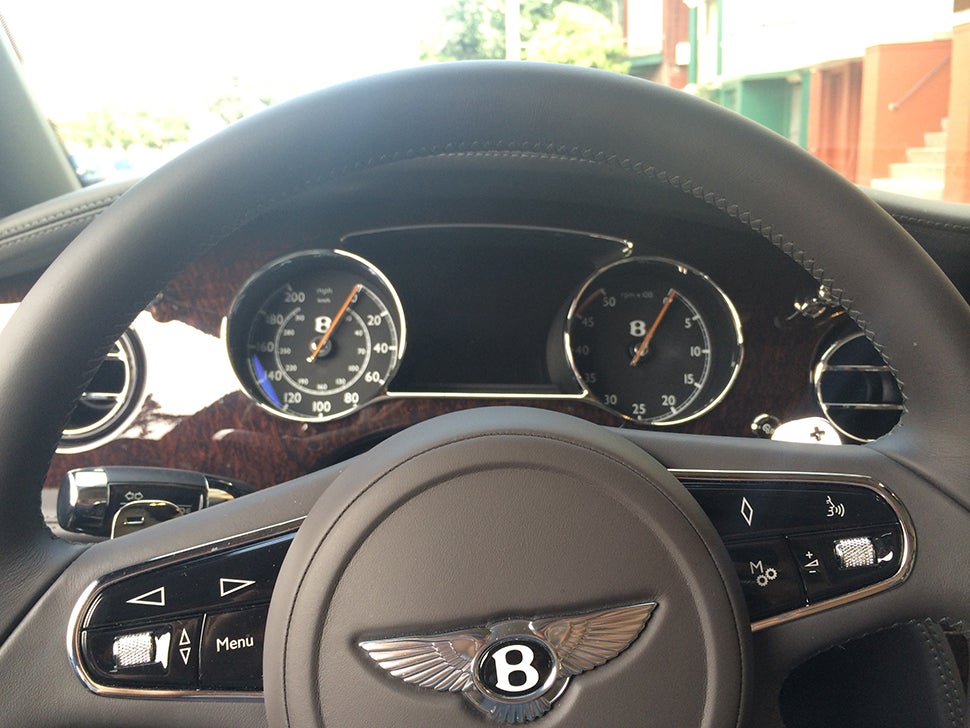 Figuring out how to accommodate for the lightning-quick development of new technology and devices — think: incorporating an inconspicuous but easy-access spot for a tablet — while avoiding short-lived fads built into the decor can be a challenge.

"It takes us around 24-months to design a car interior, and it takes around 48-months to go from first sketch into production. So you have about four years to develop the car," Day explains. "When we start a project, we look at the latest technology but obviously at the time the car is launched, what's available will have already evolved very quickly. So it's very important that we design it to be timeless. We look at the interfaces and technology as separate entities." 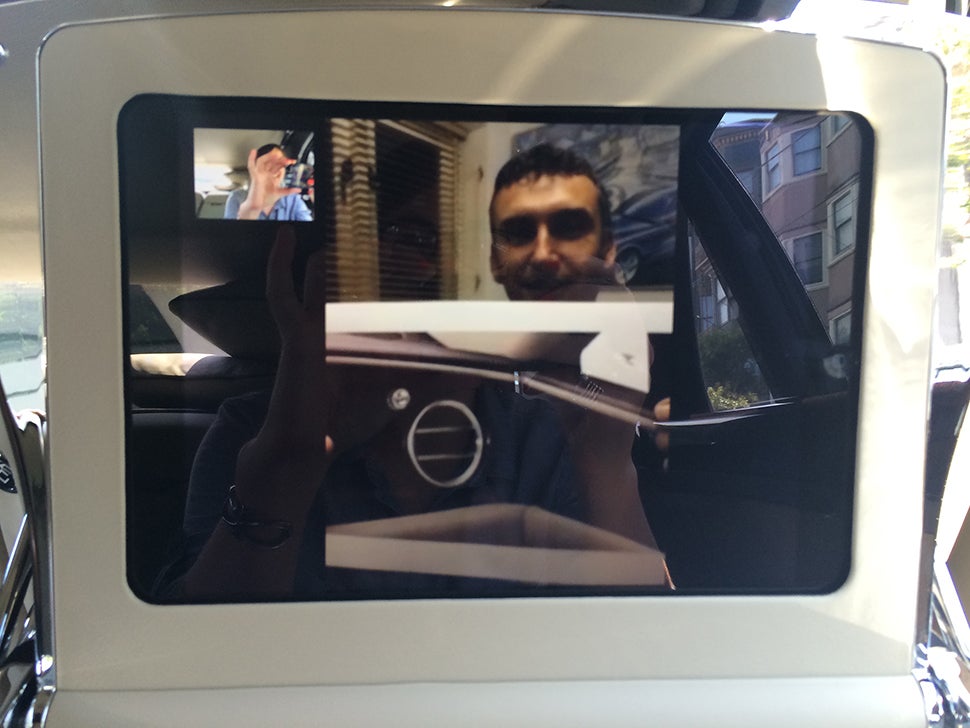 That being said, a Bentley is a blank slate that you can deck out pretty much any way you choose, and there's the opportunity for personalizing yours that's way beyond Day's vision.

So if you were to assume that money is no object to those considering purchasing a Mulsanne… You would be right. According to Day, almost everyone who's interested in investing in one of these things takes a visit to Bentley HQ in Crewe, England, where the lucky almost-owner gets a chance to see the hands-on TLC that goes into how these baby gets made. "You see people stitching the seams at the steering wheel; you see the polishes and lacquers; you see the everything coming together: People just don't realise how much goes into it," Day explained. "They go away gobsmacked." 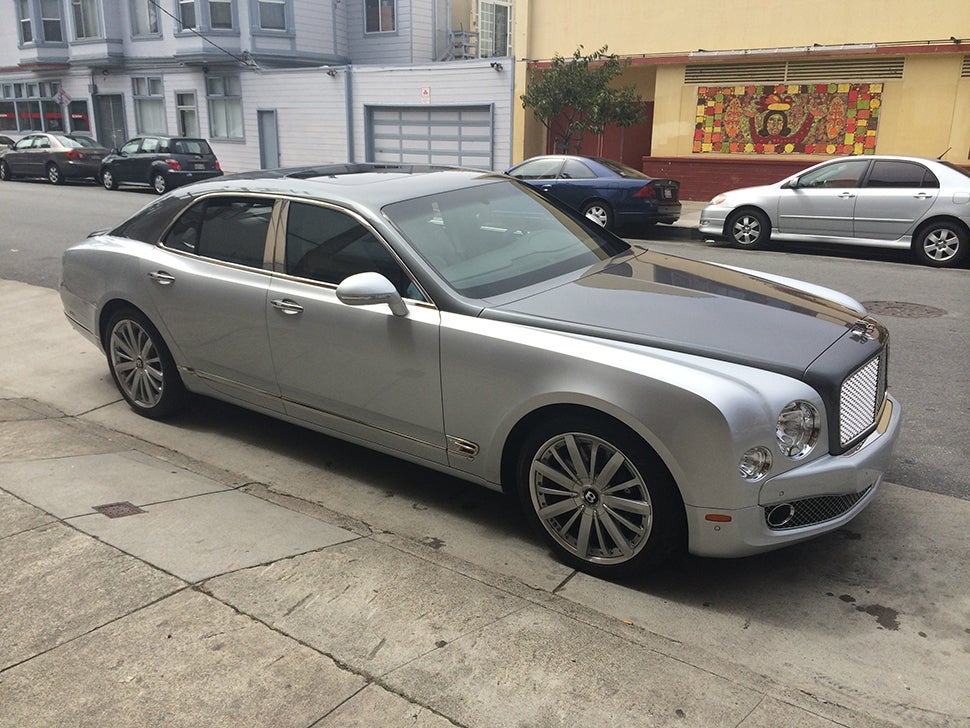 You know what else is gobsmacky? Driving this beast. Yup. I got behind the wheel, for what might have been the slowest roll around the block ever recorded in the history of automotives. My journey started on Page Street; turned the corner onto Clayton; white knuckled on Haight; right onto Shrader; then moseyed at a snail's pace back to my original spot. It felt good, if not slightly terrifying. But good. Point: Mulsanne. My apartment will never, ever move like that.