How To Build A Breast Pump That Doesn't Suck

On Sunday afternoon 10 harried but happy teams of hackers shared their inventions in Shark Tank-style five-minute presentations. The goal? To reinvent a clunky necessity of modern parenting: the breast pump.

Engineers, healthcare workers, students, mums and lots of babies gathered at the MIT Media Lab hackathon to tackle this sticky problem. The vibe was motivated, inclusive, and positive, but that's not to say anyone was shy about explaining the problems with the breast pumps on the market today — even with manufacturers like Medela, Lansinoh, and Ameda present among the sponsors of the event.

The name of the event, Make the Breast Pump Not Suck, may seem ironic — breast pumps literally suck, of course; suction is the method by which today's models work. But that's one of the problems that a few of the assembled hackers took issue with. And there are many more. 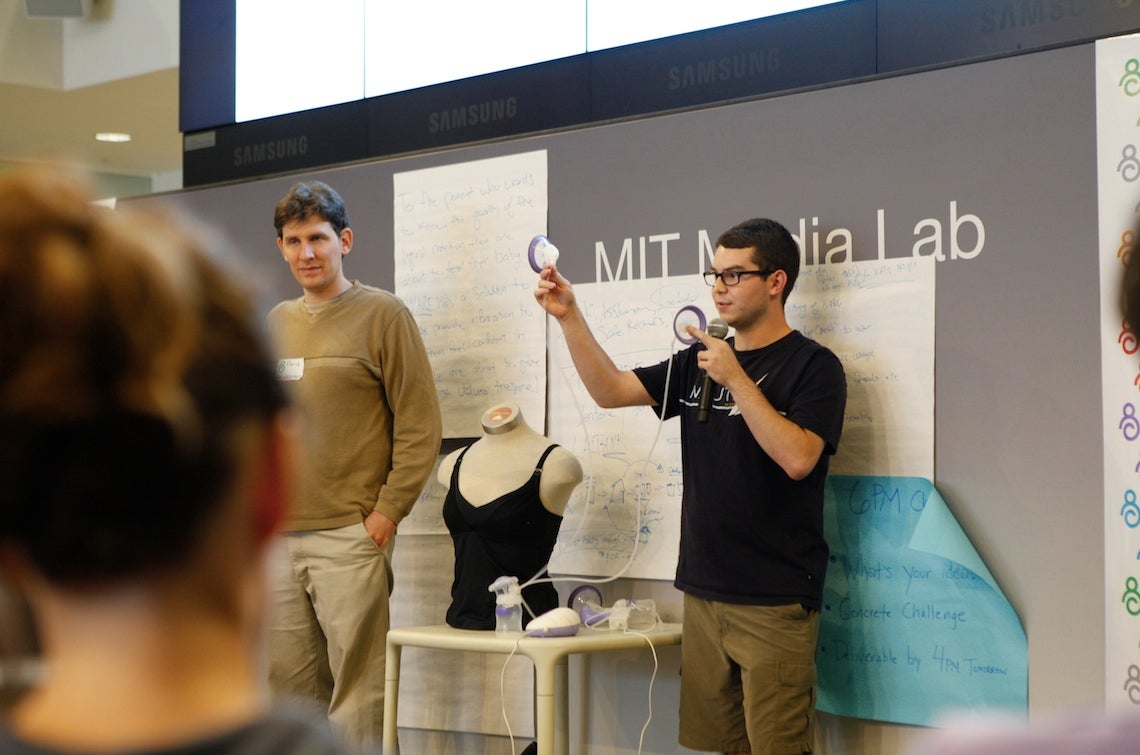 The motors are loud, and the small parts are as hard to keep track of as they are to clean. Even the hands-free models don't allow you to do much of anything else while you pump. They almost universally look like airhorns that you hold up to your chest, and for no great reason; this design can actually make it harder for mums to produce the quantity and quality of milk they need.

While those may sound like issues that can be addressed exclusively with software or hardware, breast pump concerns are also complicated by larger social issues. When kicking off the event, Catherine D'Ignazio, one of the event's organisers, encouraged the teams to think bigger.

"Rethink the spaces where people pump, and how they feel when they are pumping, and who supports them and their pumping and breastfeeding," she said. "Hack more of the systemic problems that new families face, like the lack of paid maternity leave and early childhood education." A spontaneous burst of applause followed.

A secret prize was then announced: The winning idea would not only receive $US3000 in prize money, but a venture capital firm would sponsor a trip to Silicon Valley for two members of the team to pitch to a group of investors. 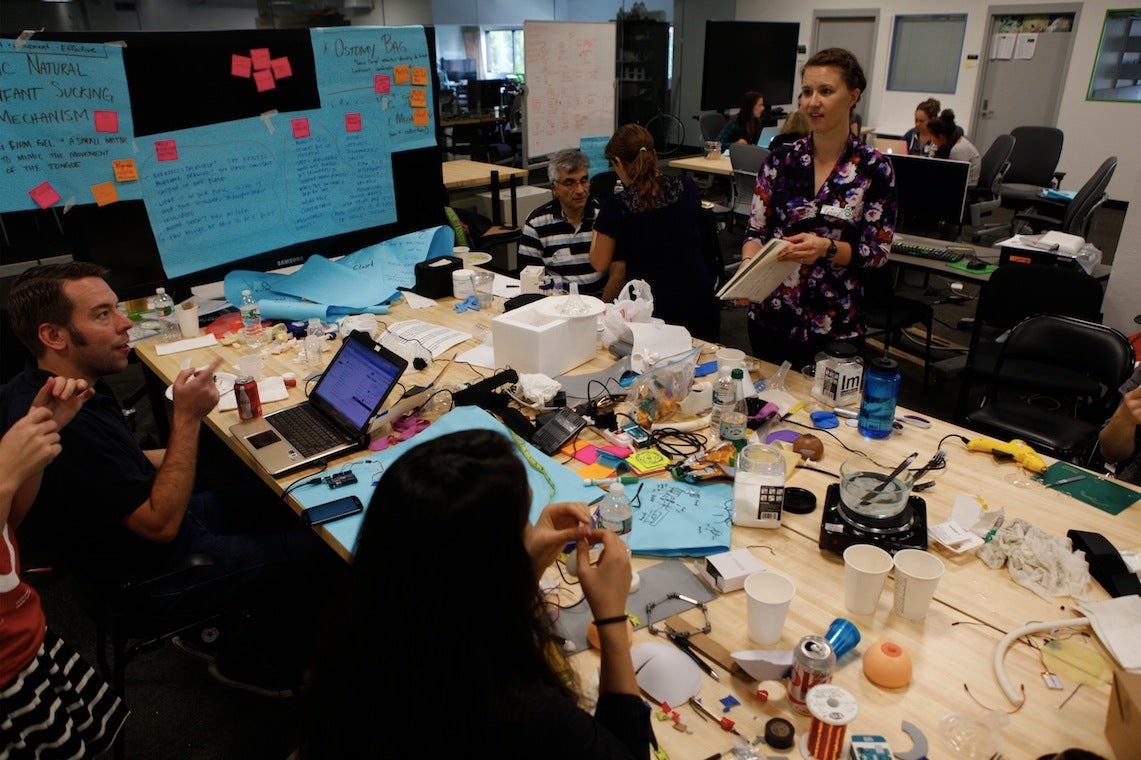 The hackathon began with talks from experts in relevant fields who were also judging the event. Topics included lactation and obstacles breastfeeding families face, maternal health within the startup landscape, and the role of innovation in global health initiatives. Then the 150 participants leapt into action.

Red-shirted volunteers colour-coded almost 1000 user-generated suggestions stemming from MIT's first breast pump hackathon and put them up on the wall. Some people chatted with the sponsors or perused the table full of materials like wires, joysticks, cotton batting, tubing, mouldable plastic and chevron-printed elastic.

There were 18 pitches in all. Compression-based pumping (as opposed to suction-based) was a major theme, as was data-gathering and baby-mimicking. Teams had until Sunday afternoon to plan, get help from the experts on-site, and work on their solutions.

Latching on to an idea 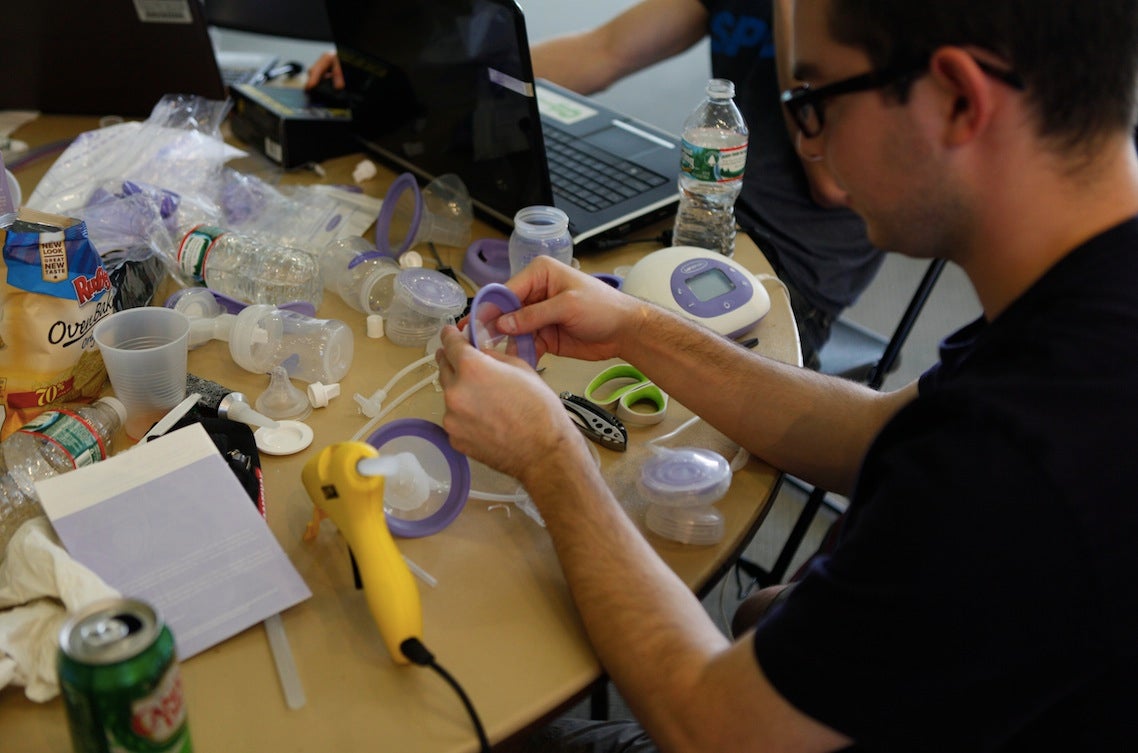 Throughout the days, the process included plenty of coos and cries from the babies in attendance, another distinguishing characteristic of this hackathon that attendees seemed to enjoy and draw inspiration from. One team member, Robyn Churchill, a certified nurse, midwife and mother of two, used surveys to ask mums what they didn't like about pumping — collecting details known as "pain points."

From this feedback a clear opportunity surfaced: redesigning the pump to make it more portable and functional. "Our approach didn't do much to change the breast pump technology, but what we did was make the use of it much more hands-free," she says.

There was a hitch, however. "When we removed the bottle from the breast, you couldn't see how full the bottle was," says Churchill. "So we needed something up there that would allow you to know how much you have pumped." The team realised that by turning the milk produced into electronic data, it could not only be monitored but tracked over time by the mother. She could get feedback about how much milk she was producing, as well as the quality, by measuring fat content.

The team members all pulled out their phones to show their gamified health apps and trackers. But how to actually measure and track the breast milk itself? "One of the guys on our team conducted tests on water quality, so we saw that we could use the same optical sensor," says Churchill.

A demonstration of how an optical fill sensor might help mums track their milk production by the makers of the Mighty Mum Utility Belt.

The result is a kind of quantified milk report that the breastfeeding mum can use to pump more efficiently but also share her information with a wider community, creating the first crowdsourced breast milk data. "Imagine being able to have actual data for actual volume produced," says Churchill. "Researchers could really use it."

How the hacks stacked up 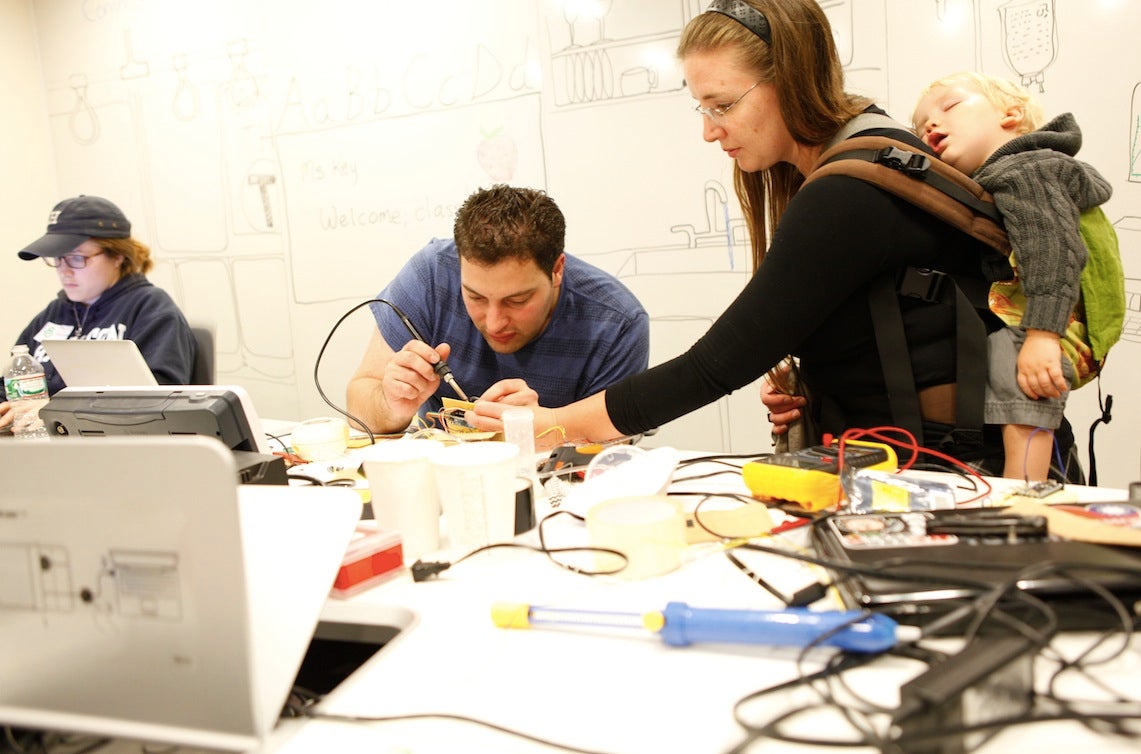 Each product, many with partial or complete prototypes, was unique and addressed one or more of the pain points users had shared. One was as simple as separating the flange from the bottle, a solution that takes away from the "milk cow" feeling mums reported.

Another idea tackled how to on keeping track of milk's production and temperature after it's been pumped to keep from wasting what mothers work hard to produce. And as organisers hoped, some addressed issues like the pumping environment and education. After nearly an hour of deliberation, the judges emerged to name the winners. 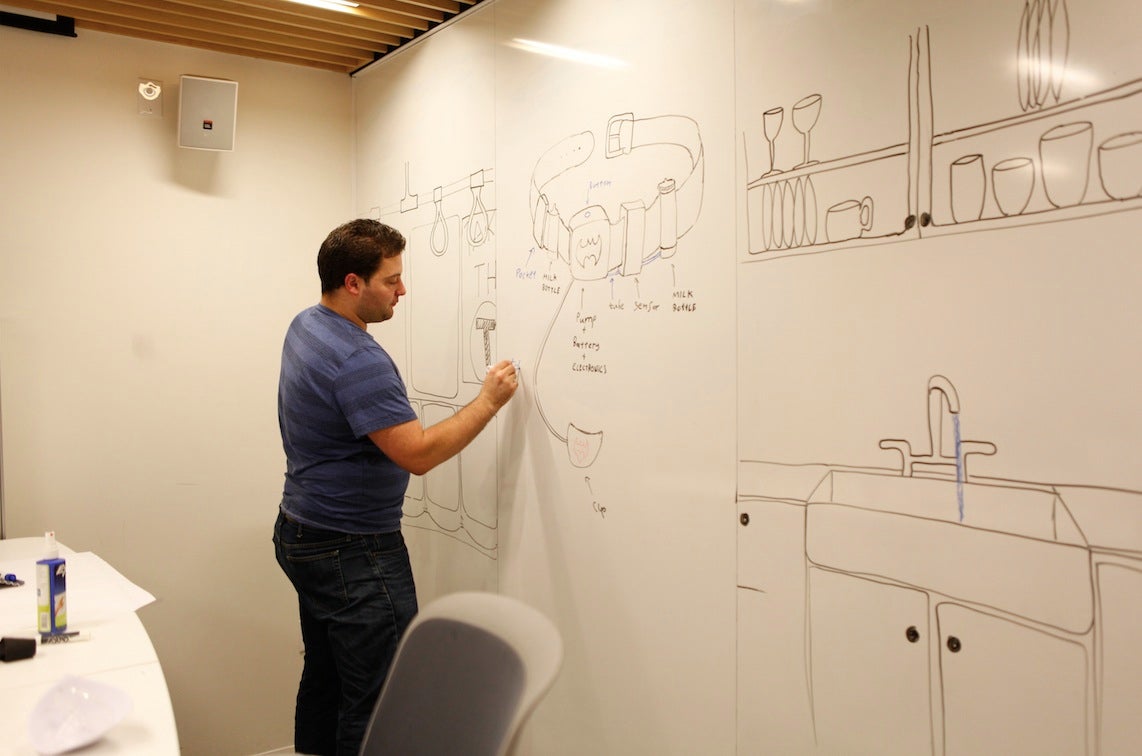 The overall winner was Churchill's group Team Batman with the Mighty Mum Utility Belt, a superhero-style belt allowed for inconspicuous pumping with a quieter motor that's separated from the user interface. It used the optical sensing tool to send data to a phone. The group also eliminated pump parts and introduced new easier-to-clean tubes.

"None of us have the answer, but if all of these can coalesce into a few different products, that could really help women," says Churchill. On top of all that, the Mighty Mum Utility Belt offers a mother a feeling that pumping doesn't have to make her like less of a human — instead, it makes her superhuman.

Carly Drown is a freelance writer and an advertising copywriter in Boston.Check out all the submissions and winners and follow the conversation online at #MLpump

Pictures: Che-Wei Wang, except where noted