Bloodletting And Bone Brushes: The White-Knuckle Days Of Early Dentistry 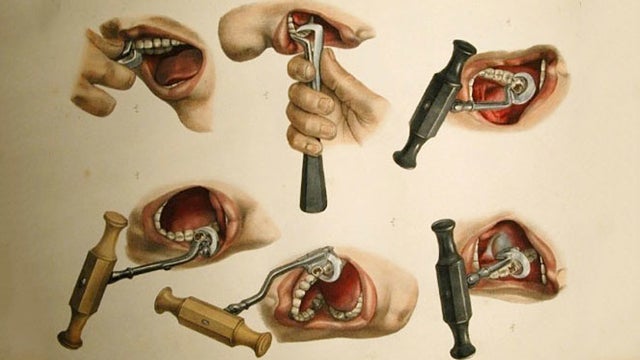 With all those gleaming, stainless-steel tools readied for painful prodding, few people look forward to visiting the dentist. But modern dentistry is a walk in the park compared with archaic methods of treating oral maladies: Be glad you're not seeking treatment for mysterious "tooth worms" or using dentures filled with the syphilitic teeth of dead soldiers.

"Dentistry, as we understand it today, didn't emerge as a licensed profession until the end of the 19th century, although practitioners had been calling themselves dentists since the late 1700s," says Dr Lindsey Fitzharris, who studies the history of science, medicine and technology, and is the creator of The Chirurgeon's Apprentice. Before dentistry became its own field, tooth-related issues were handled by any ordinary doctor, though little was understood about oral health and the reasons teeth might decay.

The important role of healthy teeth wasn't lost on the ancients: Since at least 3000 BC, people in the Mesopotamian region used the frayed ends of fibrous twigs or chew sticks, also known as miswak or siwak sticks, to clean their teeth. "Different cultures have used twigs from trees and shrubs with wood grain that is very intertwined," says Scott Swank, a dentist, historian, and curator of the National Museum of Dentistry. "You peel the bark off and chew it to get the fibres to fray out, and then you use those frayed fibres to clean your teeth. They're still used today in some parts of Africa and the Middle East." 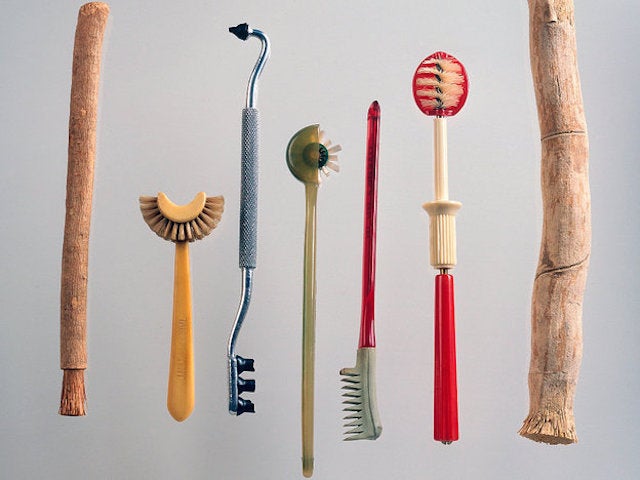 Swank says the toothbrush design familiar to most Americans dates to the late 1490s in China. "The Chinese took wild hog bristles and attached them to bamboo handles," explains Swank, "which evolved into bone handles. Bone was used right up to the early plastics, but boar's hairs are hollow, so there's no way to get bacteria out of these things — not bacteria from their hair, but bacteria that was already in your mouth." While a boar's hair toothbrush might remove some food particles, it could also distribute bacteria, thus causing problems like gingivitis, an inflammatory gum disease.

The modern, mass-produced toothbrush was invented in 1780 by William Addis, while he was languishing in an England jail for inciting a riot. At the time, most Europeans used a cloth to apply a gritty substance like salt, ground eggshells, chalk, or crushed charcoal to clean their teeth. Supposedly inspired by an ordinary broom, Addis carved holes into one end of an animal bone left over from one of his meals, into which he inserted knotted boar bristles. While Addis' design was novel, the boar bristles were still susceptible to bacterial growth. 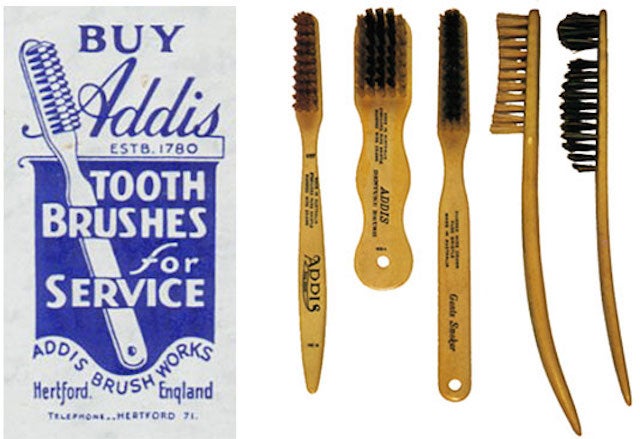 That disconnect is indicative of the poor understanding people had about the relationship between tooth care, diet, and dental health. "Many people in the past believed 'tooth worms' were the cause of tooth decay — tiny creatures that would bore holes in people's teeth," explains Fitzharris. Records indicate that the fear of tooth worms goes back at least to the time of the Sumerians, or around 5000 years ago.

Depending on the severity of a patient's pain, healers might offer a variety of unfortunate tooth-worm treatments. "Often, practitioners would try to smoke the worm out by heating a mixture of beeswax and henbane seed on a piece of iron and directing the fumes into the cavity with a funnel," Fitzharris says. "Afterwards, the hole was filled with powdered henbane seed and gum mastic, which may have provided temporary relief given the fact that henbane is a mild narcotic. Many times, though, the achy tooth had to be removed altogether. Some tooth-pullers mistook nerves for tooth worms, and extracted both the tooth and the nerve in what was certainly an extremely painful procedure in a period before anesthetics."

Over the next few millennia, several advancements were made towards alleviating the symptoms of dental-health problems. The Etruscans invented dental bridges; the Romans created gold crowns and artificial teeth made from bone, ivory, or wood; the Chinese developed amalgam, a mixture of silver, tin, and mercury used for fillings. 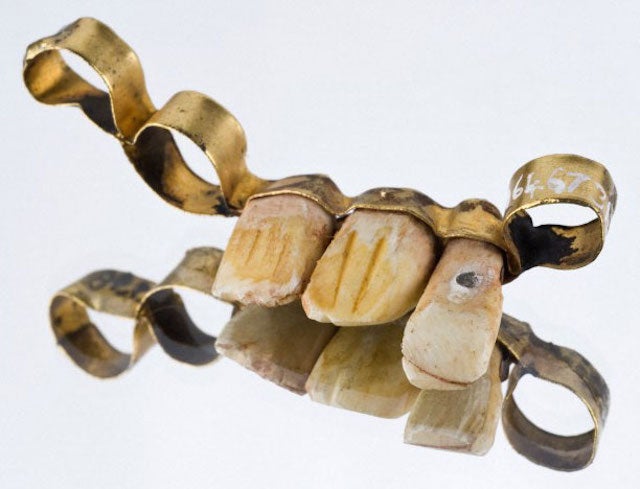 In medieval Europe, however, such advancements were rarely applied. During the Middle Ages, most doctors did research and prescribed treatment, restricting themselves to the detached realm of academia, while medical procedures like surgery were handled by a local barber-surgeon. "Until the early 19th century, barber-surgeons performed a variety of services," explains Fitzharris. "They lanced abscesses, set bone fractures, picked lice from hair, and even pulled rotten teeth. The tradition of the striped barber's pole harks back to that era, when it served as an advertisement for their proficiency as bloodletters."

The use of bloodletting as a cure-all stemmed from the ancient belief that sickness was caused by an imbalance of the four humours or bodily fluids (black bile, yellow bile, blood, and phlegm). Though it was practiced up through the early 20th century, bloodletting almost always made patients sicker. The familiar red-and-white striped barber pole originally represented the bloodied cloth bandages that would twist in the wind as they were hung out to dry. To advertise their dental skills, barber-surgeons also hung rows of rotten teeth outside their shops.

"The tooth key was first mentioned in Alexander Monro's Medical Essays and Observations in 1742," says Fitzharris. "The claw was placed over the top of the decaying tooth; the bolster, or the long metal rod, was placed against the root. The key was then turned and, if all went well, the tooth would pop out of the socket. Unfortunately, this didn't always go according to plan." In many cases, the patient's tooth shattered as the device was turned, and each piece had to be individually pulled from their bleeding gums. 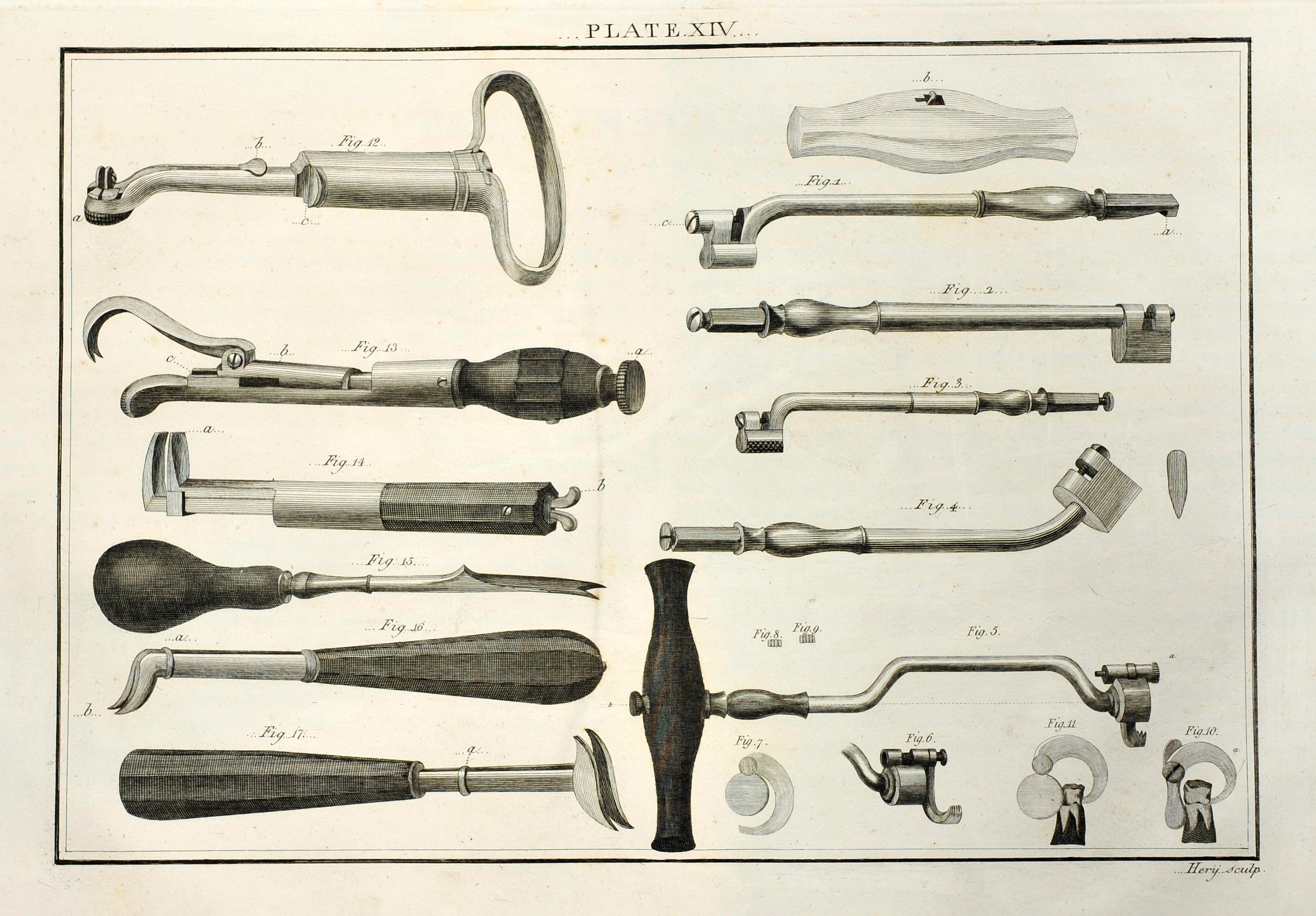 An illustration of dental keys for tooth extraction from Savigny's catalogue of surgery implements, circa 1798.

Around the same time, European surgeons began experimenting with implanting teeth. Patients who could afford the procedure chose between living or dead teeth — a classification that depended on the state of the human body the teeth were removed from. Dead teeth might have been removed from a previous patient or a body at the local morgue, while a live tooth would be selected from the mouth of a living donor, typically a poor person or slave whose desirable tooth was forcibly extracted without compensation. The replacement would then be fixed into the empty socket using silver wire or silk ligatures.

Scientific knowledge about dental health advanced rapidly during the 18th century, particularly through the research of Pierre Fauchard, referred to as the father of modern dentistry. But across the pond, Americans were still a bit behind the times when it came to dentistry. By the time Washington was elected president at age 57, he only had one natural tooth remaining in his mouth. 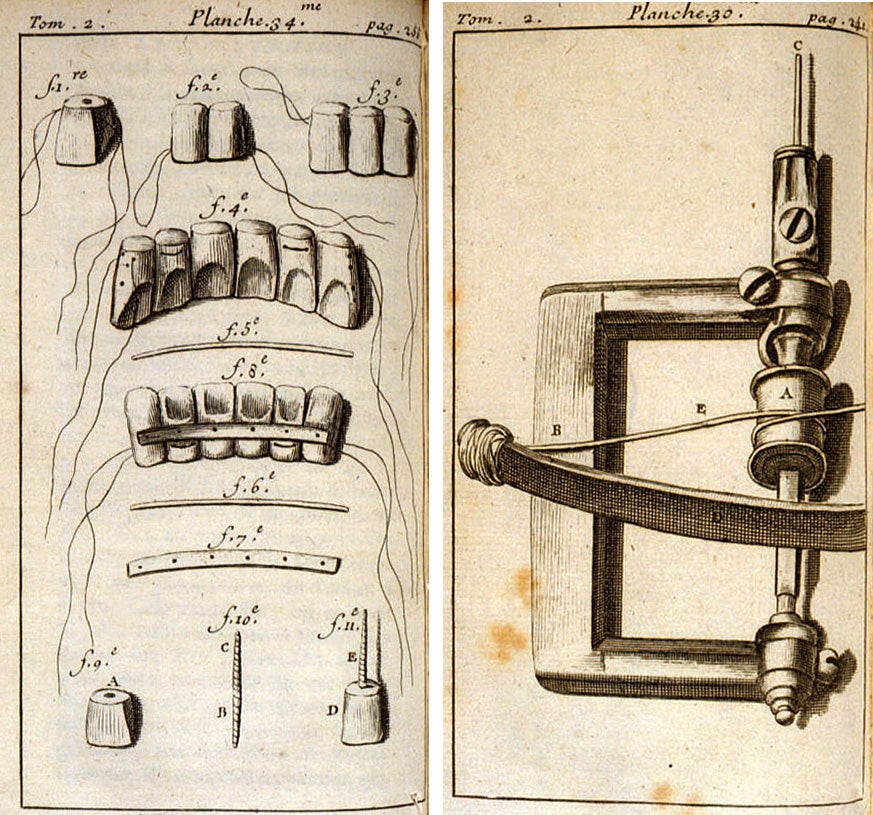 George Washington's personal records indicate that he bought toothbrushes and dentifrice, or tooth-cleaning substances, but to no avail. A former curator at the National Museum of Dentistry studied Washington's oral-health problems and suggests they were the result of a common medicine used during Washington's lifetime.

Left: this lower set of Washington's ivory dentures included a hole for his last remaining tooth. Via the New York Academy of Medicine. Right: this complete set of Washington dentures was made from animal and human teeth, ivory, and lead. Via the Mount Vernon Estate.

By the mid-19th century, dentures were often referred to as "Waterloo Teeth," after those surreptitiously ripped from the bodies of dead soldiers following the Battle of Waterloo in 1815. Eventually, human teeth were replaced by porcelain, vulcanite, and other materials as manufacturing processes improved their strength and longevity. 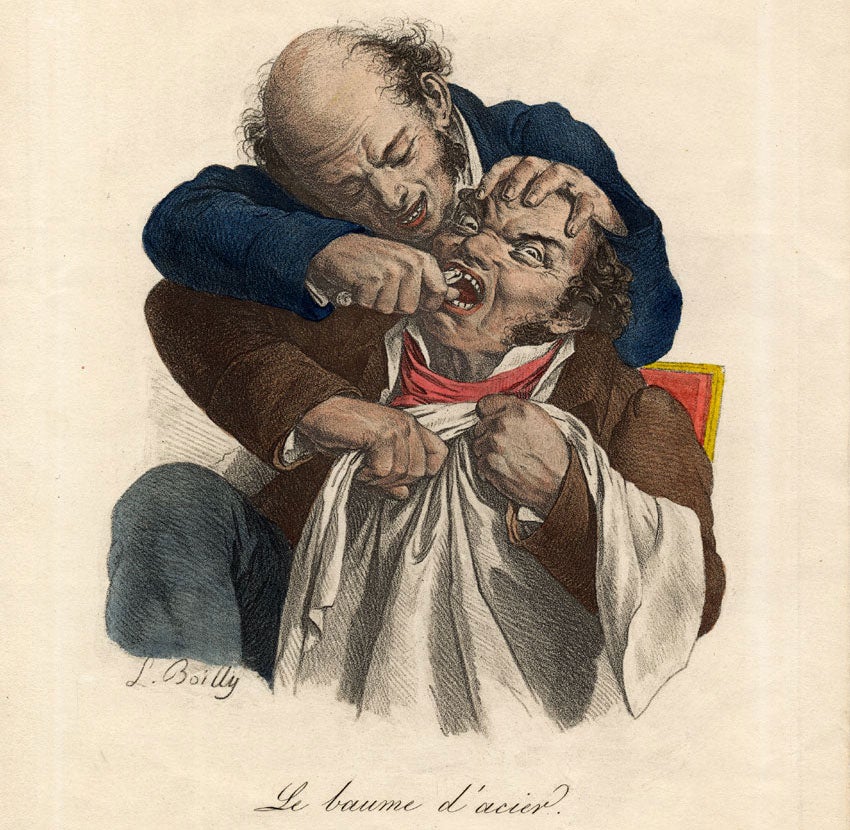 An 1827 engraving by Louis Leopold Boilly, entitled "The Steel Balm."

"When you go to the dentist and the hygienist scrapes all that hard stuff off your teeth, that's what scalers are used for," explains Swank. "But in Victorian society, if you had enough money for them, you took your own set to the dentist instead of using the dentist's. It was a status symbol, even though most sets were fairly plain with ivory or bone handles. Victoria's set of dental scalers were awfully fancy — they have got mother-of-pearl handles and their fittings are gilded silver." 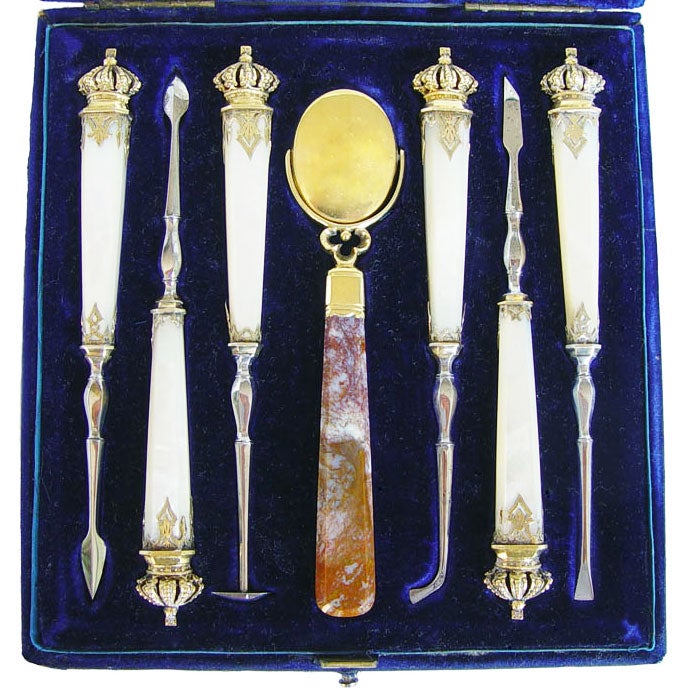 This set of dental scalers was designed for Prince Albert in the 1840s, and matches Queen Victoria's set with mother-of-pearl handles and gold fittings.

The first real push for universal oral hygiene came after World War I, when many men were left with a condition known as Trench Mouth. Due to the absence of preventive oral care, combined with an unhealthy diet and extreme stress, many soldiers developed this severe form of gingivitis. The disastrous results led the U.S. military to update its regulations for oral health and begin advocating for better daily care.

So the next time you're dreading an easy-breezy tooth cleaning, remember the many patients who came before you, and be thankful you aren't required to do a little unanesthetized bloodletting first.