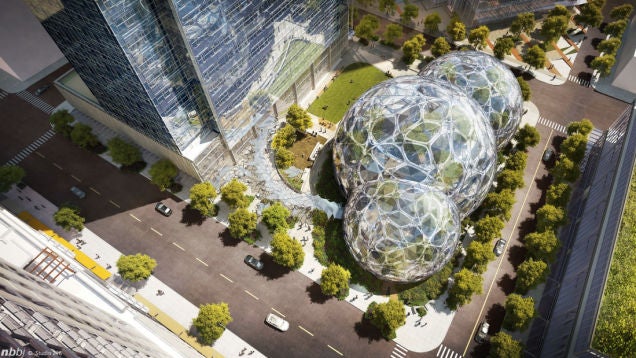 Downtown Seattle is being slowly consumed by Amazon-funded infrastructure, thanks to the expansion of its corporate headquarters — glass domes, bike lanes, streetcar improvements. Now the company has figured out an innovative way to heat their new buildings by using the energy generated by their data centres across the street.

The process — called hydronic heat — works by transferring the heat created by the data centres to a network of water pipes, which will travel under the street to Amazon's central heating system. When all the heat has dissipated, the water travels back across the street back to the data centres where the no-longer-warm water can help keep operations there cool.

Not only will Amazon have plenty of heat for the three different buildings on its campus, it might even have some left over to share. "My understanding is the waste heat from this facility is significant enough to support more than just those three," Seattle City Councilmember Mike O'Brien tells Geekwire . "I see this project as a first step toward what I hope to be a district-wide energy system, that we can build off this as a catalyst."

That would make it more like Like Helsinki's "district cooling" system, which uses the cold water from man-made underground lakes to chill dozens of structures in its downtown. In fact, Amazon's plan could eventually lead to a similar system where additional buildings and data centres could easily be added to the network, sharing and swapping their heating and cooling capabilities as needed. Which makes perfect sense for a growing tech district. [Geekwire]