10 Strange Projects In Development At NASA 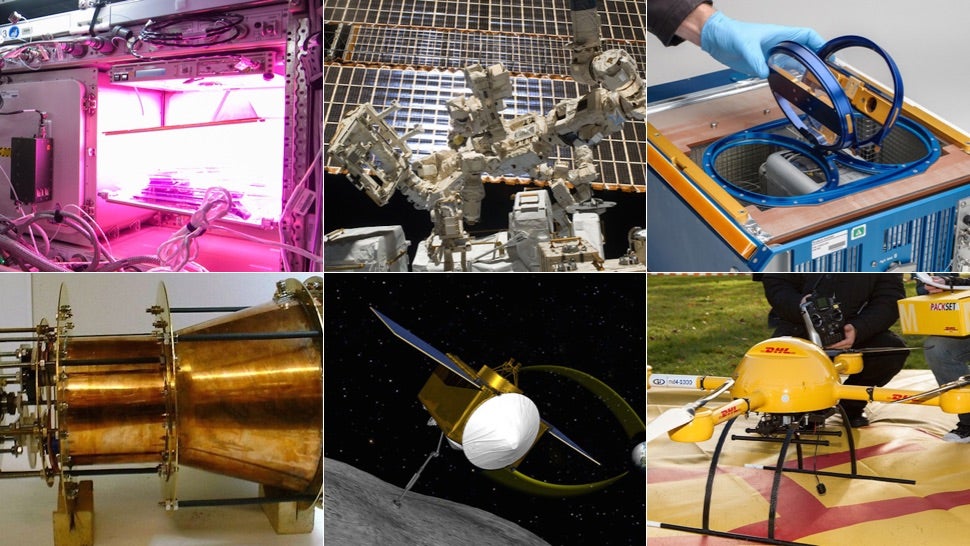 NASA is pursuing future cosmic exploration with some rather unexpected whimsy. Occasionally fantastical but always backed by concrete science, here are 10 of the most awesomely strange projects NASA's scientists are cooking up. 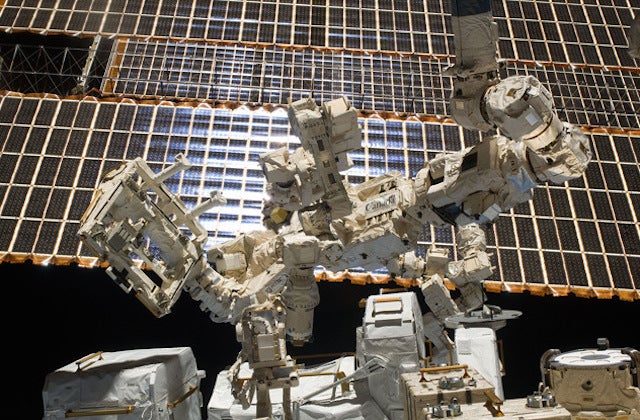 We've all seen footage of spacewalks — when astronauts dangle precariously off the side of the International Space Station, just begging to be hit by supersonic space debris. But all that danger should soon be totally eliminated by the lankiest robot NASA ever did build: Dextre, the mechanical handyman. The dexterous manipulator (as it's officially termed) is now permanently affixed to the ISS to perform maintenance and keep humans safe.

Originally designed by the Canadian Space Agency (CSA), Dextre is quite large. It stands 3.5m tall, has prehensile arms that are nearly as long, and weighs 1700kg — although that shouldn't unbalance the ISS too much, as the station weighs 410 tonnes. The robot can be controlled remotely by the astronauts aboard the station, but current protocols dictate that Dextre's commands are fed from Earth, with joint control from NASA and the CSA.

So long as Dextre performs its duties without trouble, astronauts won't have to risk their lives to fix a loose screw or frayed wire. Plus, they will have extra time to dabble in all that space science.

The Supersonic Bidirectional Flying Wing is a ridiculously suave aircraft that looks like it could cut you just for looking at it wrong. Its the creation of Gacheng Za, a professor at the University of Miami. And it piqued NASA's interest because Za's concept allows the craft to excel at an unprecedented range of altitudes and speeds.

For aircraft in general, the initial phase of flight requires a large surface area to produce lift. That's why aeroplanes have large wings. But once the craft is comfortably up in the air, the increased surface area produces extra drag and therefore deceleration. This dichotomy of aerodynamic efficiency is never fully satisfied, but NASA hopes to skirt the issue with the bidirectional design, awarding $US100,000 to further realise this crazy concept.

This giant wing is truly versatile. It uses a broad physique to easily get airborne. Then to attain supersonic velocity, it shoots to higher altitudes and rotates 90 degrees, producing the sleekest profile possible to slice through air. 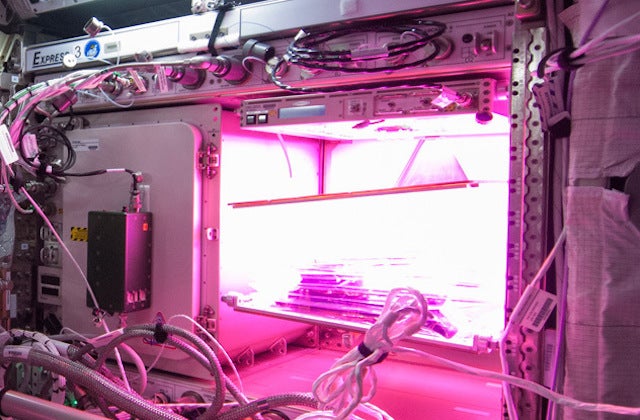 Feeding current astronauts isn't a problem because now because it's relatively easy to restock the ISS's powdered enchilada reserves on regularly schedled visits. But restocking would be out of the question on (what will hopefully be) the extended spacefaring adventures of the future. So why not have a space farm?

That's what NASA wants to find out, and ingredients for the first astroponic vegetables were delivered to the ISS in April 2014. An array of LED lights incubate the baby lettuce, with red romaine so far the only thing on the menu. The lettuce unit holds six packets ("pillows") containing seeds, fertiliser, and clay.

The mature plants will be flash-frozen and shipped back to Earth aboard a Dragon capsule. But if they're deemed safe for consumption after a battery of tests, crops of all sorts could be cultivated in microgravity, seriously diversifying food choices. 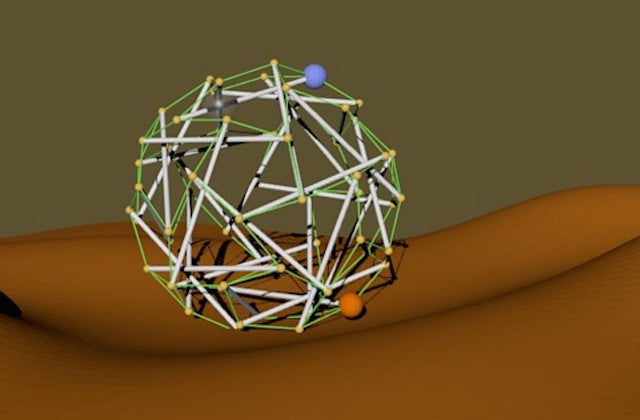 "Tensegrity" might sound like an '80s prog-rock band, but it actually stands for "tensional integrity." Using this concept, NASA has developed a flexible, physically durable, segmented ball dubbed the Super Ball Bot.

The ball's configuration allows efficient mobility and great shock-absorbing qualities because it transfers force evenly throughout the structure, much like the human body. It's so durable that NASA plans to drop these balls directly onto Saturn's moon Titan without a parachute. Its unmatched squishiness acts as a damper, replacing the need for landing gear.

It looks like a jumbled mess of tent poles. However, this flimsy contraption is actually quite stable and could serve as transport on Titan — picture an army of rolling metallic tumbleweeds. NASA will use this as a shell to augment the rovers and landers of the future. The tensegrity cocoon will cushion vehicles. The ball will get around more easily than anything with wheels, rolling over sand, rocks and other unfriendly terrain.

As a premier destination in the search for aliens, the saltwater ocean of Jupiter's moon Europa has astronomers salivating uncontrollably. Yet it's stubbornly protected by a 30km thick shell of ice. Probing these depths is an unprecedented task even on Earth, so imagine the mathematical gymnastics necessary to achieve this half a billion miles from home.

However, such a project might be closer to fruition than you might think. President Obama has already allocated $US15 million of NASA's annual allowance for Europa exploration, and this historic mission could begin as soon as 2022. NASA has already developed radical new drilling technology, custom-built to punch through Europan ice crust — a nuclear-powered ice cannon.

Testing is underway on Alaska's Matanuska Glacier, where the VALKYRIE is being prepped for its eventual use elsewhere in the solar system. Conventional drilling tools could never puncture such a mighty ice crust, and maintaining a giant drill bit is a logistical nightmare. So VALKYRIE uses a nuclear core to produce scorching jets of water to cut through the ice. 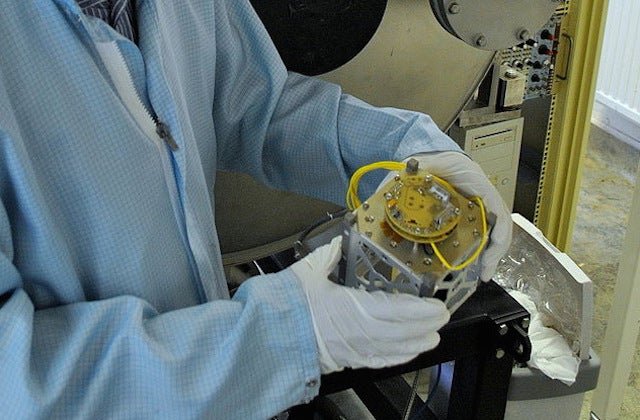 NASA's newest generation of satellites depart radically from current models. The clunky machines we're used to are being replaced by increasingly smaller devices, some of which could comfortably fit in your hands.

One of these new nanosatellites is the CubeSat. As its name implies, it's simply a small cube, 10cm long and weighing a measly 1.3kg. These satellites are highly customisable and easy to transport, which is why NASA is currently allowing students and schools to submit their own designs. The chosen sats will then be launched into space. They're so small that they can easily be carried as payloads on previously scheduled missions.

But they get even smaller. A series of stamp-sized satellites was launched into space in 2011 onboard the shuttle Endeavour to be affixed to the ISS. These are completely inconspicuous and barely larger than your thumbnail. And if testing goes well, NASA plans to launch these tiny stamps en masse. Once in space, the lightweight chips would drift about like specks of dust, replacing today's much more expensive and labour-intensive satellite production. 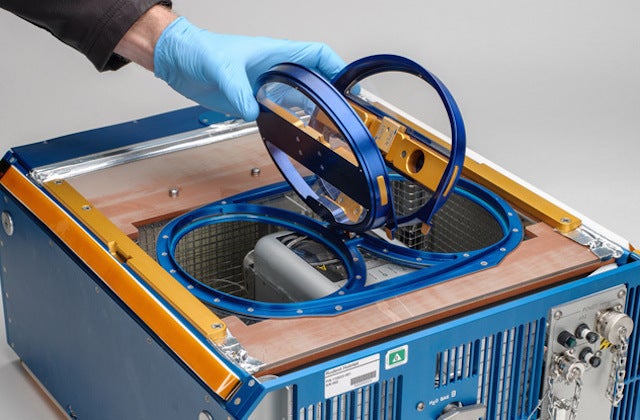 To study the effects of prolonged exposure to microgravity, NASA is sending its most adorable astronauts ever into space. Dubbed "mousetronauts" by billionaire space-man Elon Musk, the rodents have an average life expectancy of about two years, making them the perfect animal to study aboard the International Space Station.

The mice will spend six months aboard the ISS, effectively a quarter of their life or the equivalent of over 20 years for a human. NASA will observe the mice at different stages of life, noting the differences between a space-reared mouse and its terrestrial brethren. Mice have previously flown on space missions, yet this will be the longest and most involved of such studies.

They will be stored in "modules", or artificial mouse habitats. Everything necessary for comfortable living is supplied, including company, as each module can fit up to 10 mice (or six rats). Physiologically, we mammals are all pretty similar, so this experiment can reveal a lot about how humans respond to long-term micro-gravity. 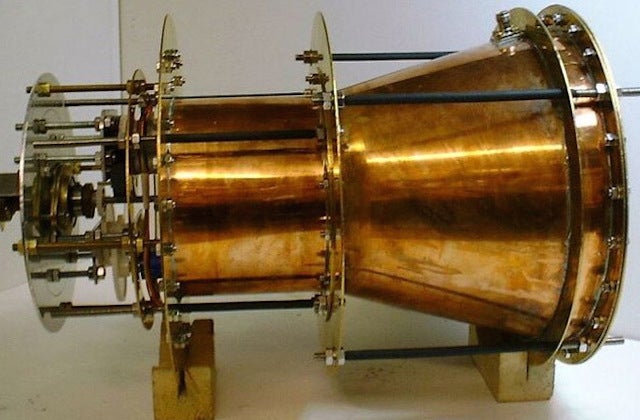 Newly developed space engines examined by NASA can create thrust without propelling fuel in the opposite direction. To a layperson, this engine seems to blatantly violate Newton's laws of motion and the momentum conservation principle, yet it appears to work.

The Cannae Drive uses its distinctive cone in conjunction with microwave radiation to propel itself across space. Instead of using fuel to boost itself along, its convex nose directs microwave-produced pressure away from itself, producing a tiny push. A similar engine, called the EmDrive, has been produced in Britain.

So, far the energy generated is on the order of micronewtons, about as powerful as a butterfly sneezing. But it implies that NASA may eventually develop a whole new breed of engine — one that will eliminate fuel costs and make deep-space voyages an exponentially more viable option. 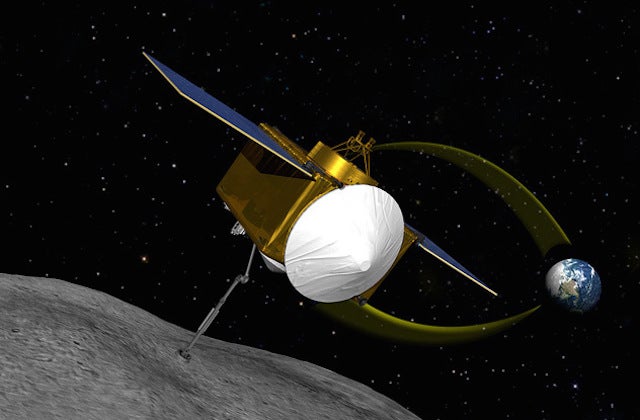 NASA's New Frontiers program is a triumvirate of planned missions focused on our own solar system. The Juno mission will provide new insights on Jupiter. New Horizons will give us our first real images of Pluto. The OSIRIS-REx might be the most ambitious, as it aims to bring an asteroid sample to Earth.

A primitive, nearby asteroid called Bennu is the target, and samples returned could offer hints about the formation of the solar system. This ancient chunk is a leftover from the debris field that coalesced billions of years ago to form the planets and the Sun. It floated around untouched for over four billion years.

NASA's OSIRIS-REx — slated for launch in 2016 — will poke into Bennu with an extractor rod. That's quite a feat, considering that the asteroid's diameter is only about the length of four football fields, and it zips through the solar system like a cosmic bullet. Bennu has a high chance of striking Earth in the 22nd century, so this mission might just be important for gathering data on the makeup of the asteroid — just in case, perhaps, we need to blow it to smithereens. 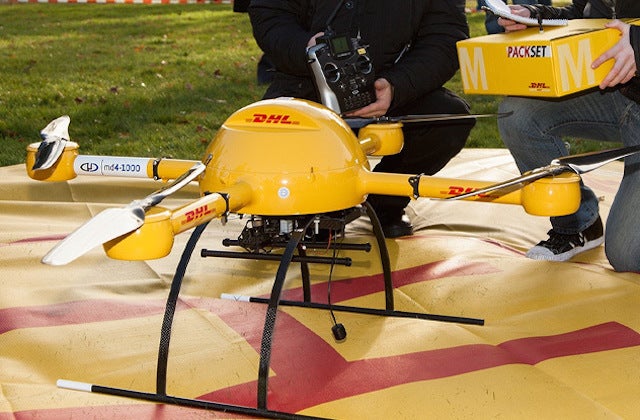 NASA has initiated a collaborative effort to develop a control system for thousands of drones that will populate our cities.

Early new drones will be tasked with monitoring crops and pipelines in rural areas, but future applications are endless. The FAA approved the first commercial drones in the United States in June 2014, and NASA's control system would open the gates for a great many other machines. Initial tests will be carried out away from centres of civilisation, keeping the cities free of flaming debris falling from the sky.

These low-altitude devices would zip 120 — 150m above our heads. However, we probably won't see a fleshed-out version of this system for at least four years years, since NASA must consider a huge number of variables before filling our skies with flying robots.

This edited article has been reposted with permission from Listverse. To read in its entirety, head here. For more from Listverse, you can head here or Like them on Facebook here.