The 5 Most Impressive Infrastructure Projects Of The Year

Each year, the American Society of Civil Engineers gives out an award to celebrate the sheer size and complexity and awesomeness of infrastructure projects built by Americans. From an Antarctic research station on hydraulic stilts to an flyover railroad crossing, this year's five finalists are truly remarkable.

Building gigantic structures is not usually glamorous, but the ASCE's Outstanding Civil Engineering Achievement award will be announced at a black-tie gala in Arlington, VA, on March 26. For now, let's take a closer look at the contenders. 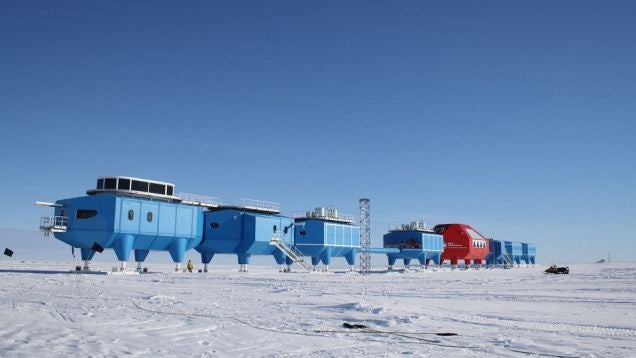 The British Antarctic Survey's Halley VI Research Station looks like a brightly coloured train-beast lumbering across the icy terrain. Indeed, Halley can move. On each of its "feet" are skis, so the entire whole station can be towed away by bulldozer. Halley VI has to be the first fully relocatable research station in the world because it sits on the Brunt Ice Shelf, which is slowly crumbling into the sea.

On top those skis are hydraulic stilts that can lift the seven capsules up and over snow as it accumulates over winter. This is actually the sixth incarnation of Halley, and the first four were in fact buried and eventually crushed by snow. If Halley VI lives up to its promise, it will fare much better than its predecessors (though recent technical issues have put its future in jeopardy). 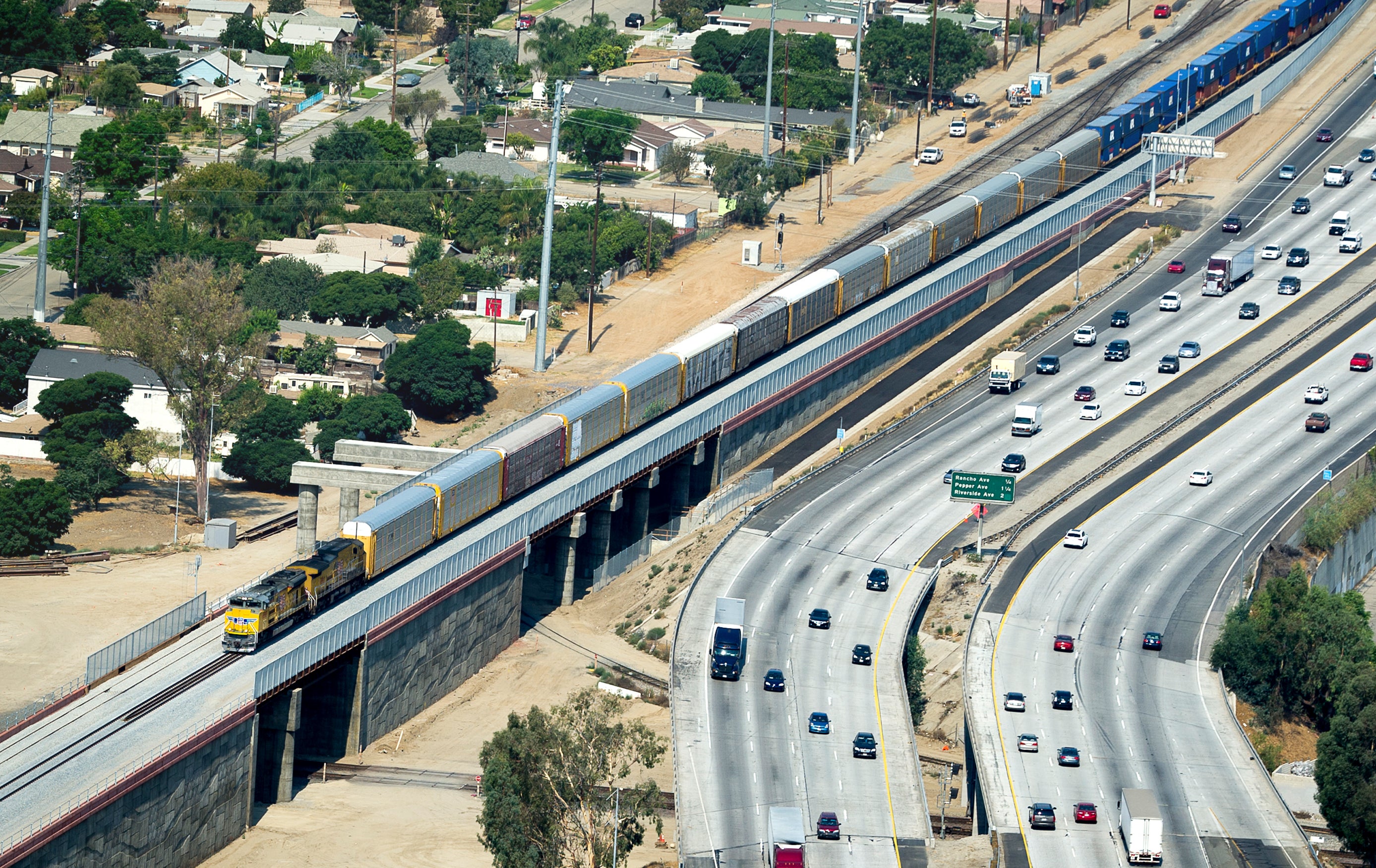 As the intersection of two busy railroads, Colton Crossing — east of Los Angeles — was one of the worst railway chokepoints in America, with 125 trains waiting to cross everyday. Since ongoing rail activity couldn't be disrupted and it was already so congested, there was nowhere to build but up into the air.

The engineers made innovative use of cellular concrete, a lightweight mixture of cement and water slurry with filled with tiny bubbles. Cellular concrete allowed the Colton Crossing Flyover be much lighter than anticipated, so that the soil underneath didn't need to be replaced to support the weight of the structure. In the end, the project was delivered at half the initial cost and eight months ahead of schedule. 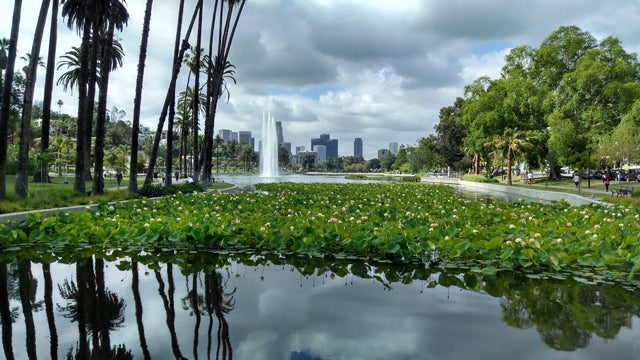 Echo Lake was originally built as a reservoir of drinking water for Los Angeles in the 1860s. When it was turned into a basin for dumping extra stormwater, Echo Lake became, as you might expect, filled with algae and toxic metals and trash. The first step in the rehabilitation was draining the lake, which uncovered furniture, a toilet, and three guns.

Engineers then excavated clay from underneath the lake to line its bottom, so the manmade lake didn't need a synthetic liner. To keep the lake from ever getting so gross again, hydrodynamic separators remove grease, oil, and trash from stormwater before it reaches the main body of water. Lotuses now bloom on the rehabilitated lake. 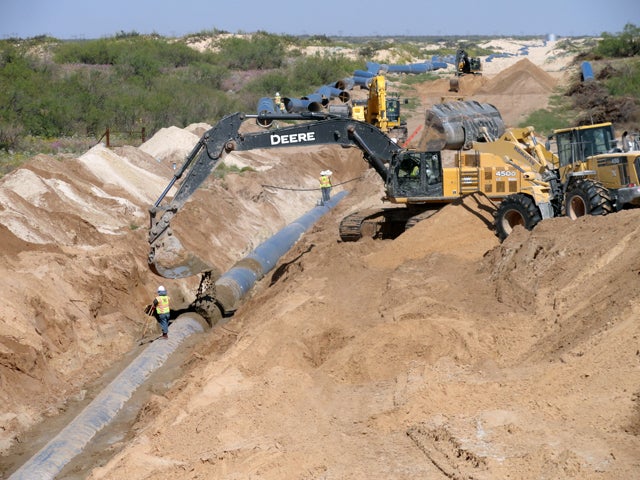 After a decade of drought in West Texas, the Colorado River Municipal Water District's reservoirs fell to a frighteningly low 5.5 per cent of capacity. To prevent an emergency water shortage, the district embarked on a $US100 million project to tap into the groundwater.

As the ASCE notes, the massive project is comprised of "21 groundwater wells, 65 miles of pipeline, and 4 booster pump stations." Pipe line had to be built through miles of shifting sand dunes, but the whole project was completed in just 18 months.

The new eastern span of the Bay Bridge is certainly handsome and certainly huge — at ten lanes, it is the widest bridge in the world. It is also the longest bridge of its type — a single tower, self-anchored suspension span bridge — in the world.

While the Bay Bridge's size is certainly impressive, I have to say its designation as an outstanding engineering project seems odd. After years of delays and cost overruns and then snapping bolts and allegations of misconduct in management, the new span has become a bit of joke for those of us in the Bay Area who are forced to rely on it. An engineer has also voiced his dissent in a comment below ASCE's announcement for the award. The new span is supposed to replace the one that had been damaged in the 1989 Lomo Prieta earthquake, and boy, we sure hope it holds up as promised.

Am I being too hard on the Bay Bridge simply because I live near and hear about all its bad news? Are there other more "outstanding" infrastructure projects out here? Let us know in the comments. [American Society of Civil Engineers]

Travis Johnson 13 Feb 2020 1:40 PM
When someone says "Australian science fiction movie," thoughts immediately and inevitably turn to Mad Max - if not George Miller's insanely influential 1979 original, then to any of the sequels that followed over the years, including the recent, justly lauded Fury Road. But here's the thing: it was never just about Max.