Tom Cruise’s Bananas Space Movie Has Found Itself a Director

Where to Find the Best Music to Tune Out to While...

Only Half of Americans Say They will Get Vaccinated For Covid-19... 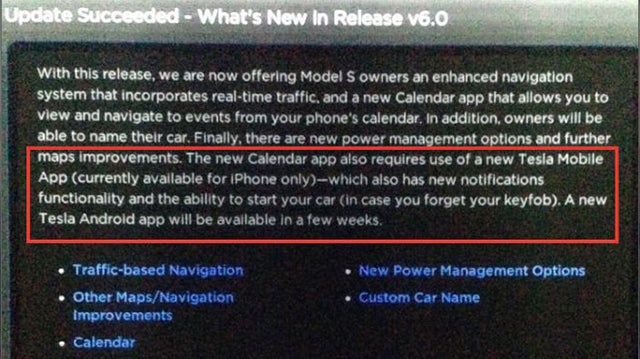 Tesla’s Model S is so technologically advanced, it gets software updates the way your old-fashioned car gets oil changes. And rumour has it the newest update will let iPhone-using Tesla owners forget their car keys forever: The car will soon recognise the owner’s phone to start the car.

First spotted by 9to5Mac, this screen capture of Version 6 of the electric car’s software has some nifty new features. First and foremost is that iPhone-as-car-key capability, highlighted above.

Yes, companies like Chevrolet already offer apps that let you remote-start your car. But you can’t drive the car unless the transponder key is in your pocket. Judging by the beta screenshot captured by 9to5Mac, Tesla’s setup will have no such limitations. The iPhone becomes the car key.

The new software update also adds in calendar integration, which auto-loads the route to your events on the car’s nav system (assuming you’re the kind of fastidious person who puts actual addresses in your events). And as Musk hinted in a Colbert interview last month, the new software will let Tesla owners name their cars. He calls his Old Faithful. Awwwww.

OK, but what if your phone gets stolen? We don’t have anything official from Tesla, but the speculation is that the app would work with the iPhone’s fingerprint sensor, which Apple will open up to third-party apps with the release of iOS 8.0. And it’s worth noting that Tesla seems more interested in digital safety than any other carmaker, inviting Def Con hackers to have their way with the Model S and hoping to hire the best and sneakiest.

Don’t worry, Android-loving Tesla drivers: Your phone-key app is promised in a few weeks. Soon, you’ll be able to leave your car keys at home — just hope you have your phone charger at work. [9to5Mac via UberGizmo]