Monster Machines: This Meteor Missile Can Fly Farther Than The Eye Can See 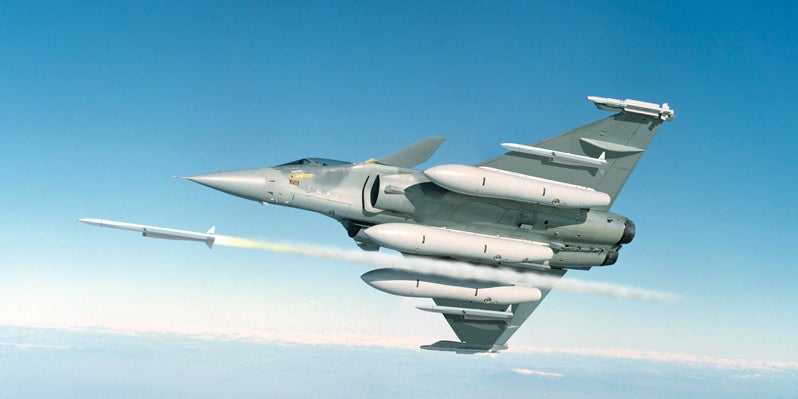 Sweden doesn't readily spring to mind when discussing global military powerhouses, but the European nation is far from being a pushover. In fact, the Swedish military — working in conjunction with a cadre of marquee manufacturers and five other European nations — is nearing completion on the world's first and only air-to-air missile that can strike targets on the other side of the horizon.

The MBDA Meteor BVRAAM (Beyond Visual-Range Air-to-Air Missile) was initially developed by the UK, although Germany, Italy, Spain, France and Sweden joined the project shortly thereafter. The missiles are designed for use aboard the Eurofighter Typhoon and Gripen C/D and will be used to counter long-range airborne threats well before they threaten the nation's borders.

Each $US2.2 million missile measures about 4m in length and 18cm in diameter, weighs 180kg, and carries a blast-fragmentation warhead (although details on the the size of the package remain scarce). Its throttle-able ducted rocket (read: ramjet engine) uses a boron-heavy propellant mix to reportedly achieve a threefold increase in its specific impulse (the measure of a rocket's force — propellant consumption per unit of time) and a 300 per cent larger no-escape zone than today's best ramjets like America's AGM-168 JAASM.

Being 21st century weapons, they are of course part of the Internet of Things. Each Meteor is network connected, allowing it to not only receive command and directional updates when in flight, but also relay information such as its functional and kinematic status, multiple unit targeting info, and of terminal seeker lock-on.

And with successful test firings from a Saab Gripen this March, Sweden looks to become the first of the participatory nations to field the new Meteors when the country's Air Force receives its MS20 (Materiel System 20) combat systems update from Gripen later this year. [MBDA - Wiki - WSJ - Air Force Technology]