The New Dragon NaturallySpeaking Can Do Almost Anything Your Mouse Can

Today Nuance is releasing version 13 of its Dragon NaturallySpeaking voice-dictation software. More than just an automated memo-writer, Nuance hopes to make the software into a voice-control-everything feature for PC users. And it comes damn close to pulling it off.

NaturallySpeaking 13 (naturally) adds some incremental voice recognition improvements. According to the folks at Nuance, Version 13 understands users more accurately than Version 12 with the voice training. Beyond that Version 13 expands on the reach of the voice commands. Previously you could speak some rudimentary browser controls but now, you can format text, click links, scroll through pages, select text or photos, and post to sites like Facebook, Twitter, or WordPress essentially without touching a mouse or keyboard.

Obviously the tech still has its flaws though. When Dragon's Technical Product Manager David Popovitch demoed the new software for me via webcast, I asked him to voice-dictate and send an email to me on the spot. This is a decidedly dirty trick when you've got a last name like Sorokanich, and an email address at Gizmodo. Neither of those words appear in any artificially-intelligent dictionaries I know of.

"Gizmodo" befuddled the software at first:

But it took just a few steps, all summoned by voice, to get Gizmodo added to the NaturallySpeaking dictionary. A few moments later, David sent this email to my inbox, without ever putting a finger to his keyboard or mouse: 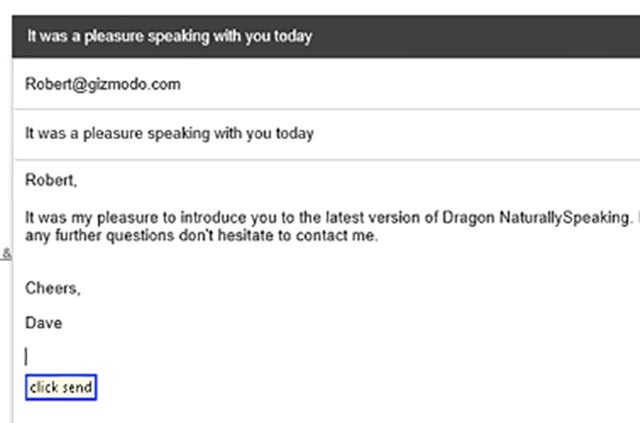 Dragon 13 is the first to allow voice dictation through the built-in microphones on many laptops, though during our demo David used a small external desktop mic. Like previous versions, the mic is triggered with the voice commands "wake up" or "go to sleep," or by clicking or hitting a keyboard combination, so you don't end up inadvertently transcribing your phone calls.

Dragon 13 also includes a feature where, if you give it permission to do so, the software will crawl through your "sent email" folder to learn contacts' names and addresses and the specific words and phrases you use most frequently. The software can also look at files and folders stored both locally and on Google Drive for similar custom-tailoring purposes — again, only after you've given it permission to do so.

Dragon 13 seems very quick and responsive, whether it's transcribing text delivered at a normal conversational pace, clicking links on a page, composing or sending emails, or posting updates to Facebook or WordPress. Highlighting, rearranging, and formatting text all went smoothly, and navigating the web in particular impressed me: in the time it took me to register which link David was asking his computer to click on, it had already opened the next page.

English-language Dragon NaturallySpeaking 13 Premium is available starting today for $US200 (with special upgrade pricing for current registered NaturallySpeaking users). The light-duty $US100 Home version, as well as versions supporting other languages, will be available later this year. The software is PC-only for the time being, and while it's not 100 per cent goof-proof, it could very well lead to a lot less wear and tear on your keyboard and mouse.