Happy Hour: How To Drink An IPA, One Hop Flavour At A Time

If you're a fan of modern IPAs (PBR drinkers: Go stand in the corner) then you are no doubt a friendly familiar of hops, the magical bud that gives beer its bitter bite. But with hundreds up hops varieties and some brews using upwards of a dozen of them , it's hard to know which hop is imparting which flavour unto your beer.

So Sam Adams is doing something pretty cool. It's taken its Latitude 48 IPA — which contains five different strains of hops — and is releasing a sort of beer flight. They're calling it Latitude 48 Deconstructed. It contains not just the Latitude 48 you (maybe) know and (probably) love, but five other beers, brewed exactly the same way, but each containing just one of the hops strains. It gives beer aficionados the rare opportunity to experience these hops one at a time and see exactly where their favourite flavours come from. 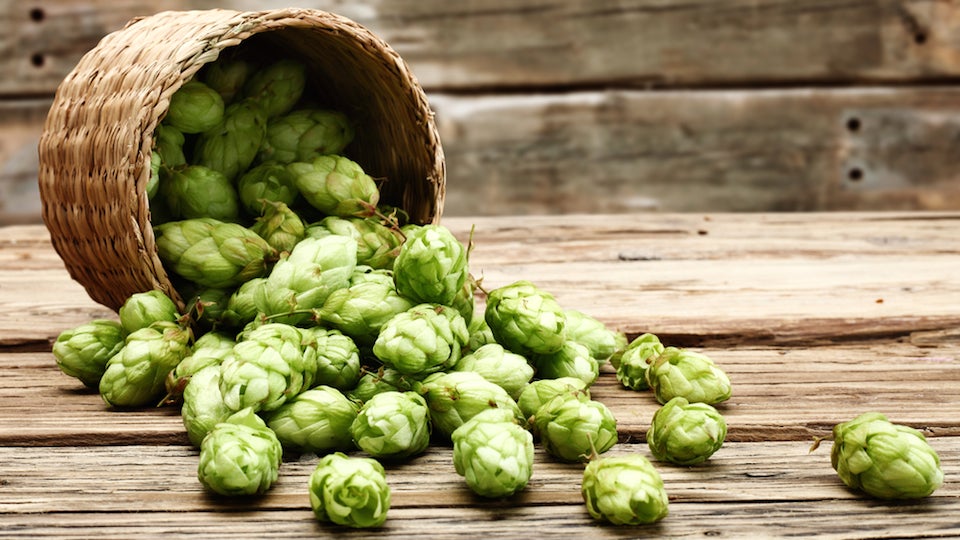 For those of you not yet familiar with this lovely plant, here's an extremely brief overview. It is believed that hops have been a part of the beer-brewing process since the 8th century in Europe, if not earlier. Why was it first added? We have no idea. Possibly because beer was unbearably sweet at the time, and a little bitterness helped to balance it out. However, the reason it continued to be used in beer production is pretty clear: It turns out to be a selective antibacterial agent. It happens to do a pretty good job fighting bacteria that spoils beer, but it leaves the good bacteria (i.e. brewer's yeast, which is critical for fermentation) alone.

For the most part, hops were used in not-so-heavy quantities — hell, even Budweiser has hops in it. But it wasn't until British soldiers living in India developed a taste for highly-hopped pale ales (likely hopped that heavily to prevent spoilage in the high Indian heat) that the term IPA (India Pale Ale) was born. Soldiers who grew fond of the stuff while in the service returned home and wanted more, and so IPAs grew in popularity there, too. 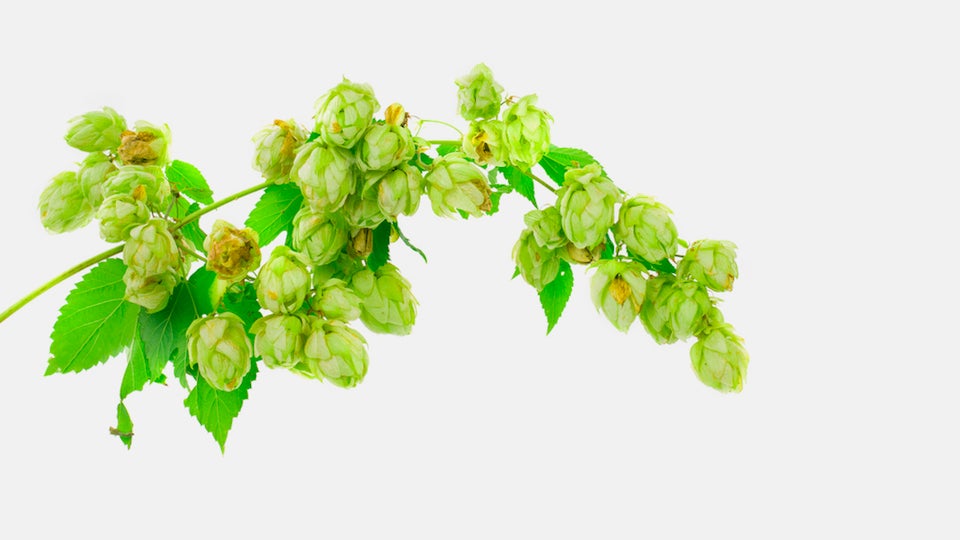 The part of the hops that goes into the beer are the buds (sometimes called cones) from the female plant. This should sound all-too-familiar to advanced-level potheads out there, and rightfully so: The most important bit is in the resinous stuff within these buds.

Hops add flavour, aroma, and of course, bitterness. This happens almost exclusively through two component parts in the resin: Alpha acids and beta acids. The alpha acids are the biggest contributor to that classic hoppy flavour, and it's also where the antibacterial properties come from. The beta acids generally do more to influence the beer's aroma.

What's significant is that, again as with marijuana, different strains of the hops plant produce buds with significantly different chemical makeups. Some will have a much higher alpha-to-beta acid ratio. With others, it will be more balanced. Some will have harder-to-quantify characteristics ("Do I smell grapefruit?"). As we learned with our "hops of the future," growers invest a significant amount of time, energy, and resources into growing what they hope will be the next big thing in hops. They (and brewers) are looking for the right combination of aromas and flavours that will add an exciting new dimension to their beer.

Hops like to grow in temperate, moist climates. It just so happens that those climates are often found at the 48th parallel north, aka latitude 48. This band cuts through parts of the northern U.S., the UK, Germany, and even parts of Asia. It's from growers along this line that Sam Adams picked the five varieties of hops that it uses in Latitude 48, hence the name. 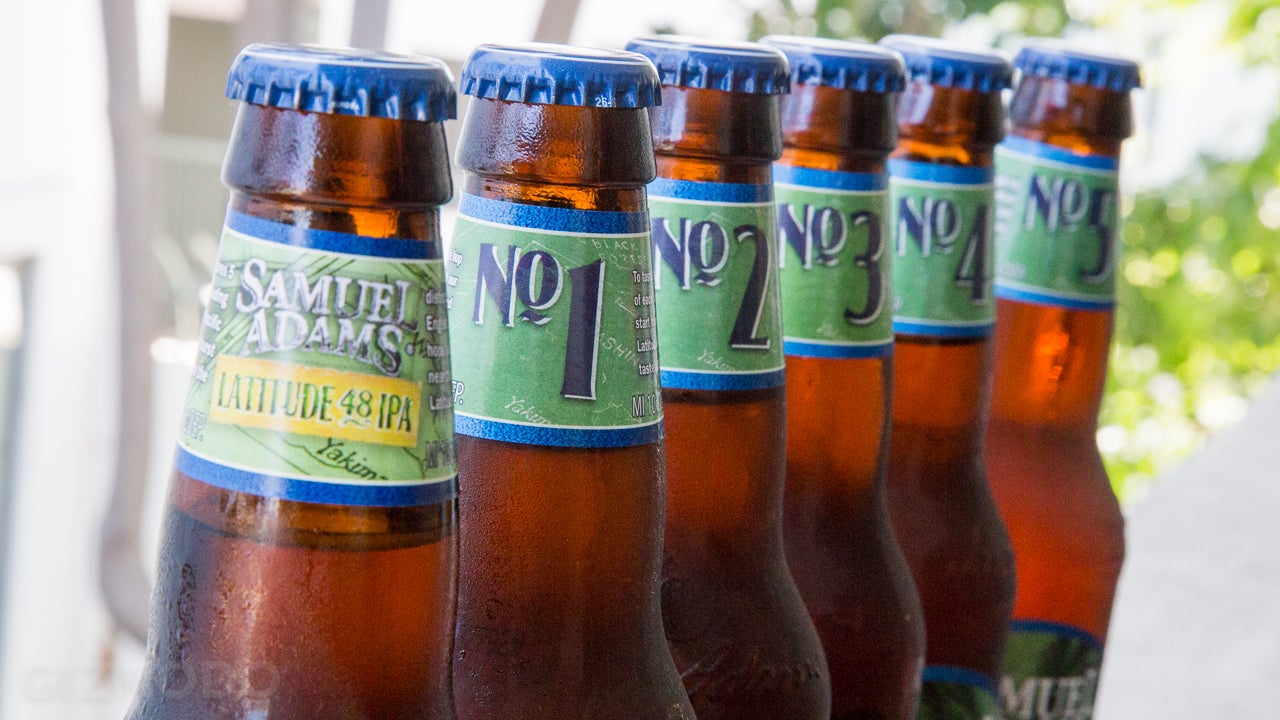 Flavours the Span the Globe

Latitude 48 Deconstructed comes in a 12-pack. In it you'll find two bottles of beer made with each type of hops and two of the complete Latitude 48s which contain a blend of all five. Sam Adams sent me some, so I invited a couple beer-geek-friends over and we had ourselves a little, informal tasting. 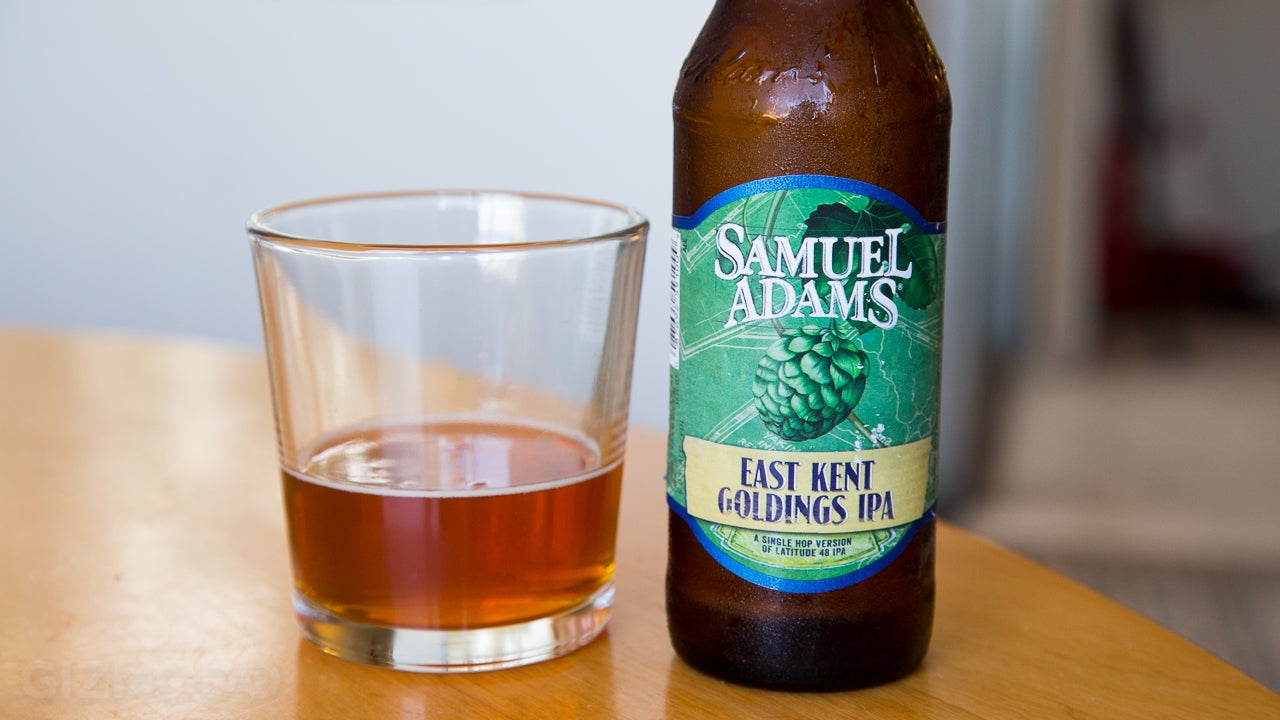 Number one was East Kent Goldings IPA from East Kent, UK. This one definitely had pleasant, earthy bitterness to it. Very easy, very smooth, but none of that sharp, punch-to-the-mouth that's commonly associated with, say, a West Coast IPA. This was more understated. Y'know, in a British kind of way. 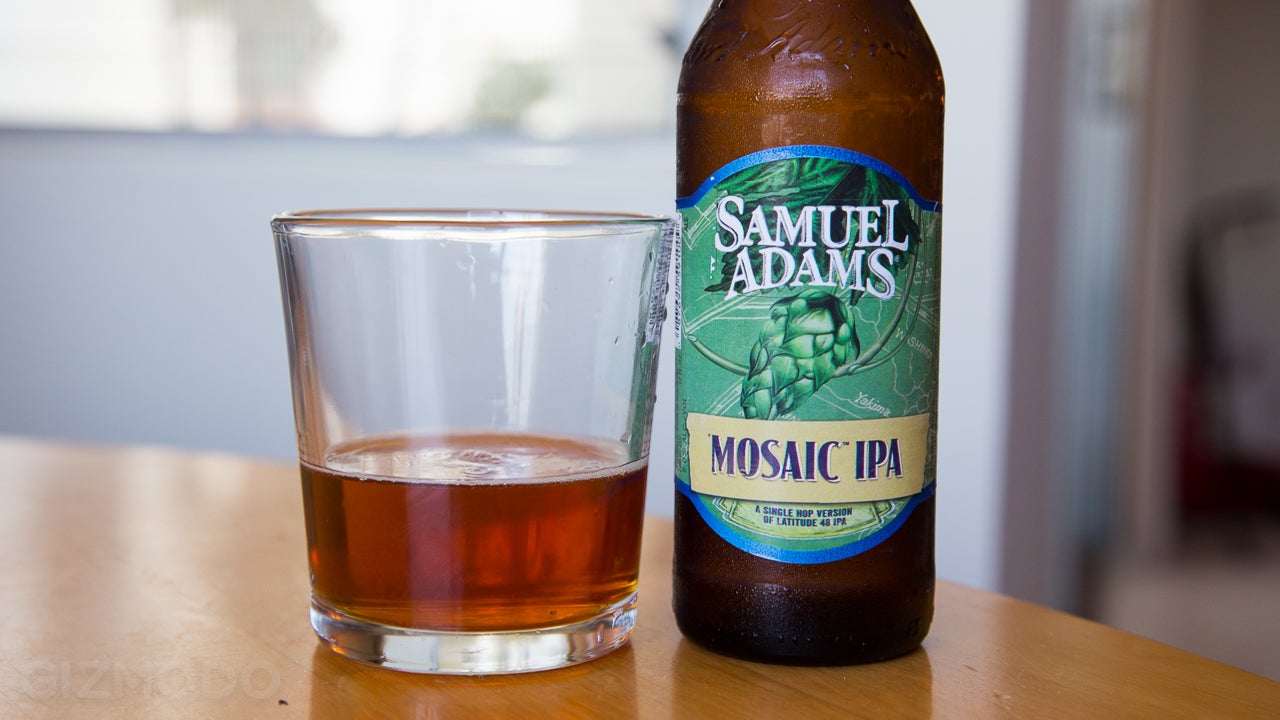 Next up was the Mosaic IPA, using Mosaic hops from the Yakima Valley in Washington State. This is a new addition to Latitude 48 this year. This one was extremely well-balanced. It has a lot of those citrusy notes that we've started to associate with American IPAs, but again, it's not a kick to the jaw. It tastes very fresh, and the bitterness is never overwhelming, even in the aftertaste. 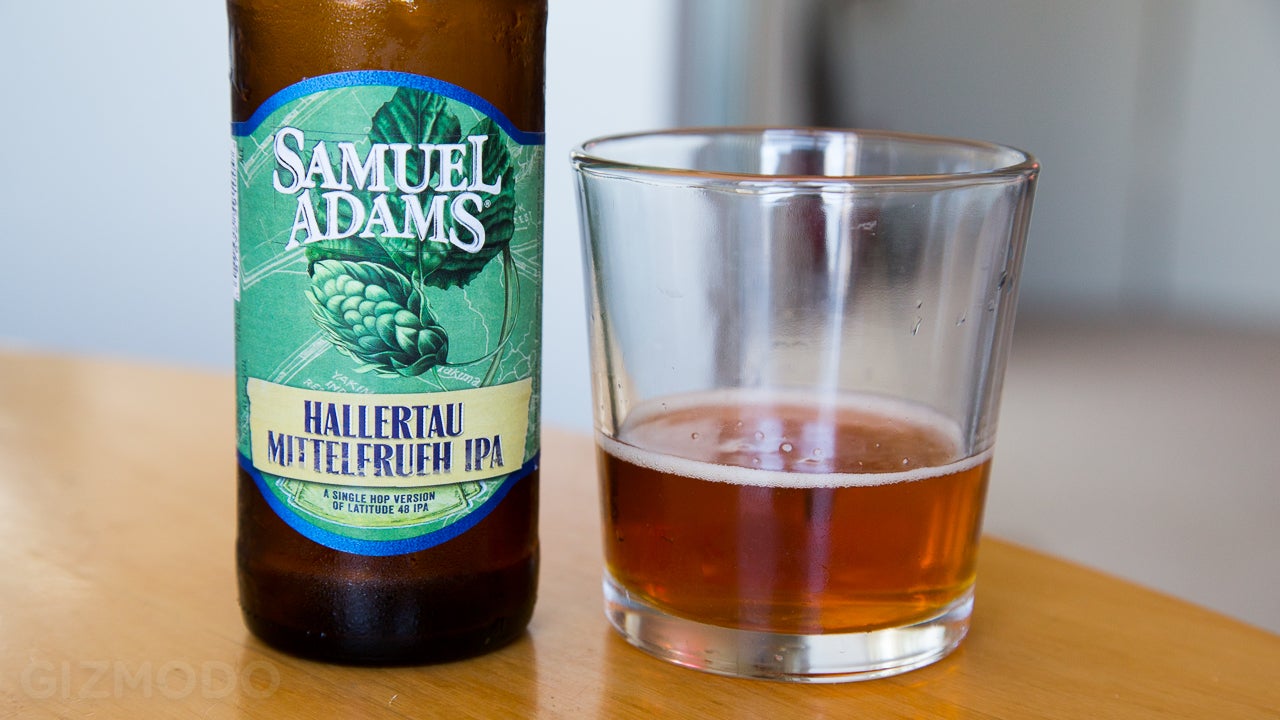 Number three is Hallertau Mittelfrueh IPA, from Bavaria, Germany. While physically impossible to pronounce without an extra larynx, its flavours are extremely familiar, and with good reason. The Hallertau region boasts the first documentation of cultivating hops in recorded history — way back in the year 736 — and you'll find them in all kinds of beer, including lagers, pilsners, and yes, Bud. And you can see why when you taste it. This strain belongs to a family known as "noble hops," which are characterised by being high on aroma and low on bitterness.

My friends and I all remarked on how smooth and caramel-y it tasted. It takes much more of a backseat role. My friend Jim called it "the Miller High Life of IPAs," but he didn't mean that in a bad way. Definitely the least bitter of the varieties. Very drinkable, with no flavours that linger overly long. 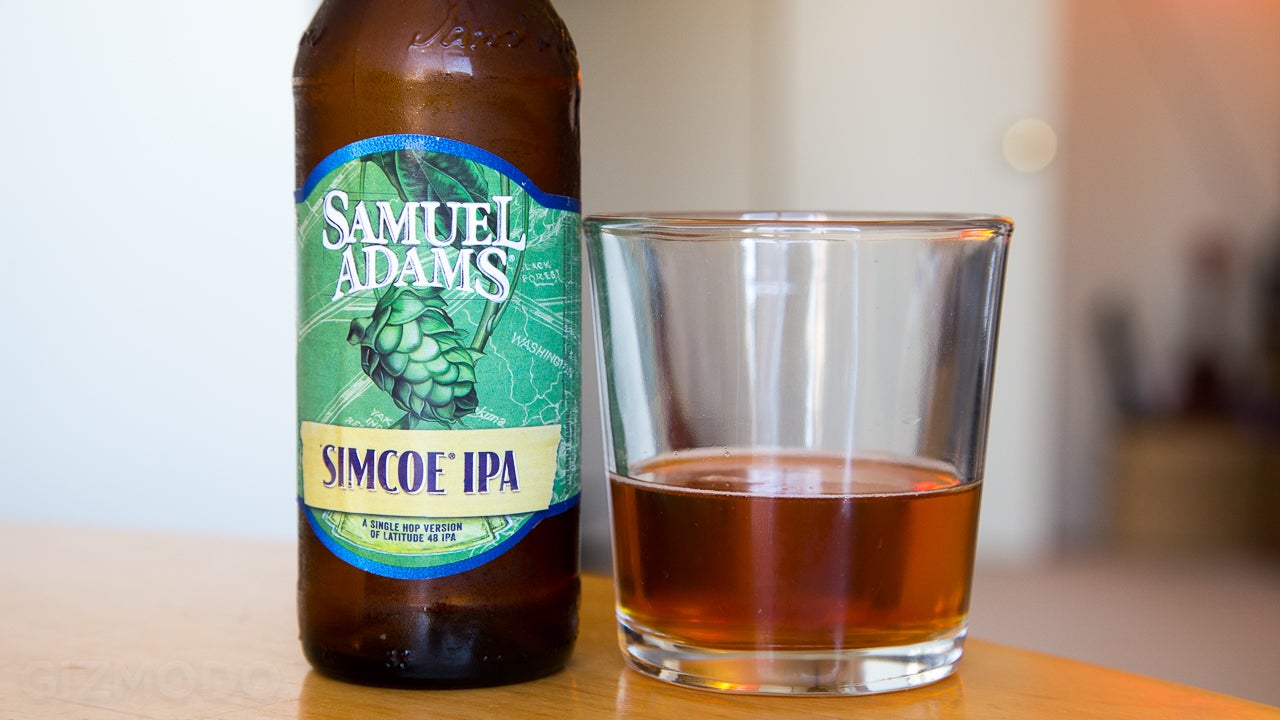 Number four was Simcoe IPA from Yakima Valley, WA and — oh yeah — we are most definitely drinking a West Coast IPA now. It's sweet. It's very American. It hits you in the mouth right at the beginning. It's got that grapefruit rind and a little bit of pine resin. It's definitely the strongest flavour of the five, but if you go for West Coast IPAs, you'd probably be into it. Indeed, Simcoe has been among the most popular hop varieties on the West Coast craft brew scene. 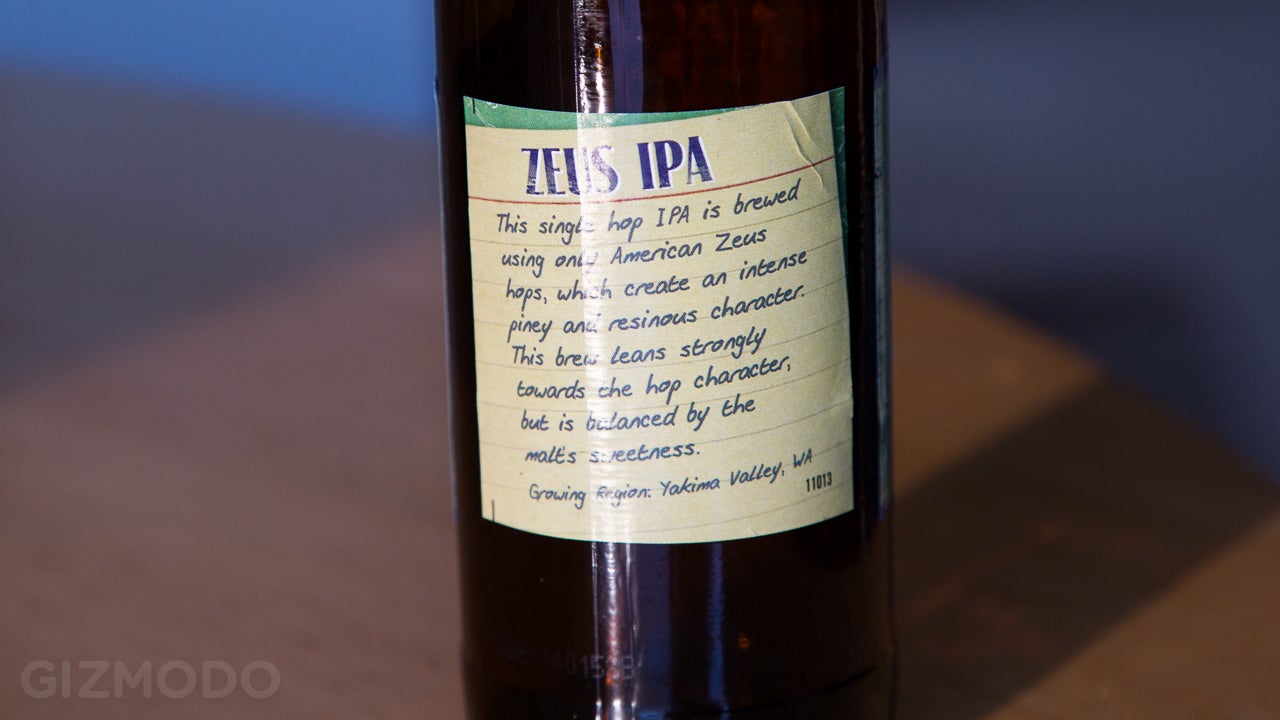 And bringing us home in number five is Zeus IPA, also from Yakima Valley. Like its namesake, it's big and strong. It packs a punch, but it's still very refreshing somehow. There's a little bit of that lingering burnt flavour on the aftertaste, but it's extremely light on the front-end. Definite pine, definite resin. My buddy Paul said it reminded him of playing baseball. While it definitely packs a wallop, we all found it very drinkable. 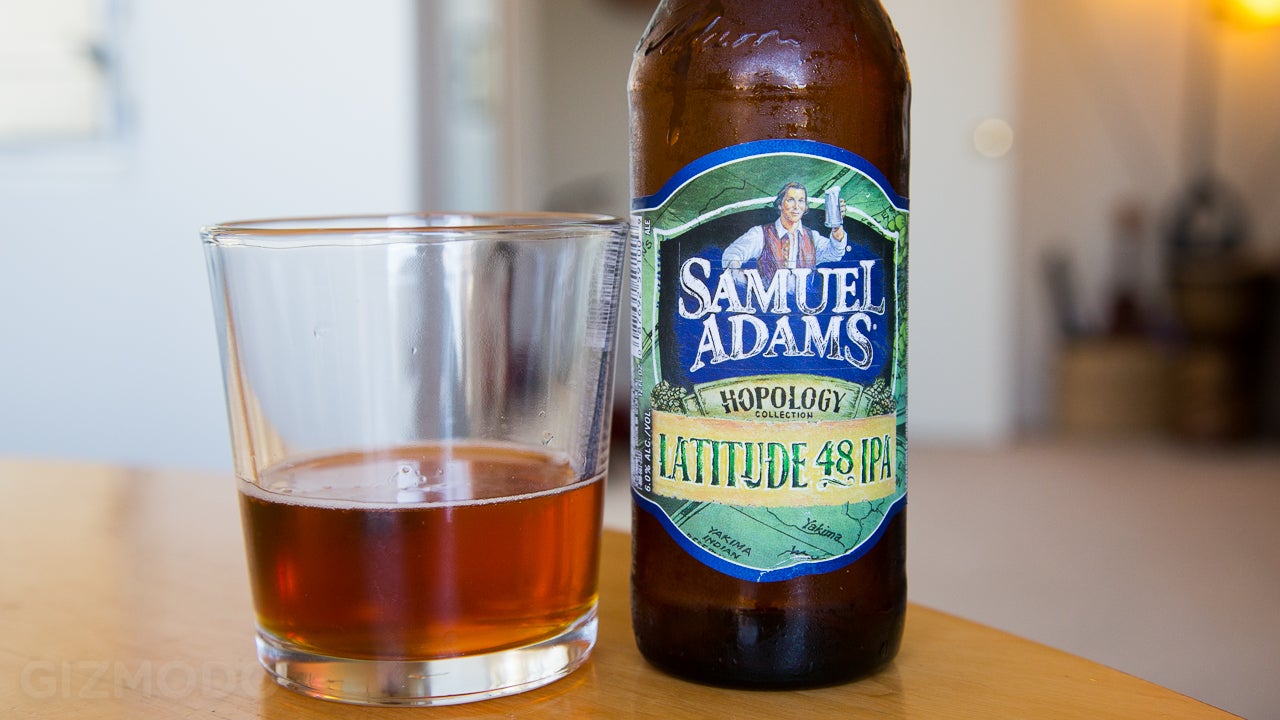 Bringing It All Together

Finally, we hit the straight-up Latitude 48 IPA. We all agreed that like Jeff Lebowski's rug, it really ties everything together nicely. It's extremely well-balanced. It has the West Coast bite, but it keeps going. With the other beers some would be front loaded, some would hit you in the middle, and some would linger at the end. With the final blend, it's a continuous hop ride from start to finish. It's almost certainly not a 20/20/20/20/20 per cent mix, but deciphering what ratios are used in the final product is well beyond my pay grade.

That's not to say that the flavours don't change, though. They do, but it's on the subtle side. You'll catch the different characteristics (grass, orange, pine, weed, etc.) ebbing and flowing. It's aggressive, though. It's the kind of beer you want to drink after a burger; It would cut right through the grease.

We all agreed that the final destination was good — very good even — but we also felt that getting there was kind of more fun. We each had beers along the way that we liked a lot, and while it was cool to see how they all blended together in the end, some of the nuances got lost. It's a bit like drinking a single malt versus drinking a blended Scotch. Are there good blends out there? Sure, but some of the individual characteristics get lost in the mix. Had we started with this, perhaps we would have dug it even more. 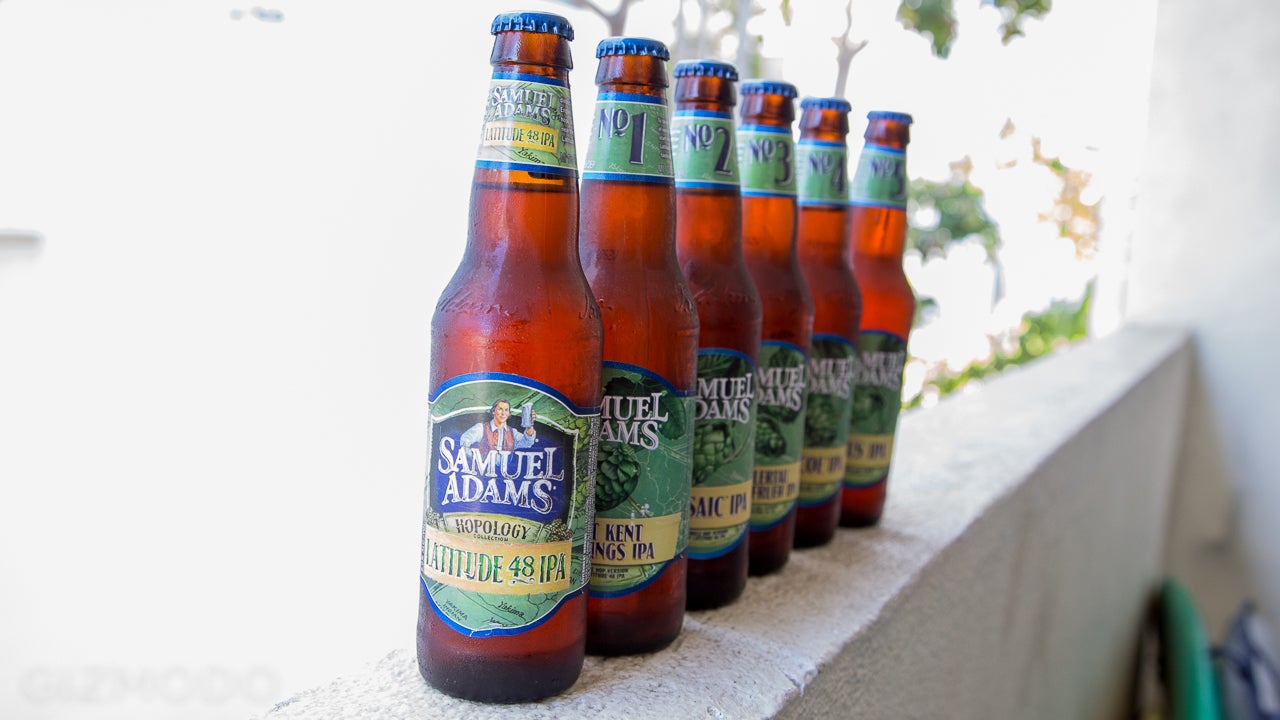 All that said, is this a really fun adventure for beer nerds? Hell yes it is. I've never been able to experience something like this. On paper, the beers' recipes would all look the same. The only real difference is the strain of hops out of Ye Olde Greate Hoppe lineage that's being used, and the differences are really stark. I'd love to see other breweries jump on this bandwagon.

Sam Adams Latitude 48 Deconstructed is currently available in the US, but just for a limited time. The 12-pack will run you between $US14 and $US19 bucks, depending on where you buy it. For a unique drinking experience like this, for you and a friend or two, we'd say it's definitely well worth it. [Sam Adams]

Big thanks to Jim Kane and Paul Keany for helping me drink beer. I know I ask a lot of you.