Yo, Hodor App Is Very Hodor

Already bored with Yo but eager to experiment with a copycat app using the popularity of a prestige drama as its hook? Then you’ll love Yo, Hodor, the Game of Thrones-themed parody of the single-word novelty app. It’s the same thing as Yo except you send the word “Hodor” to your friends instead of the word “Yo”.

You can download Yo, Hodor for free at the iTunes store, at least until HBO finds out it exists and sics lawyers on creator Tyler Hendrick (who works at Medium). 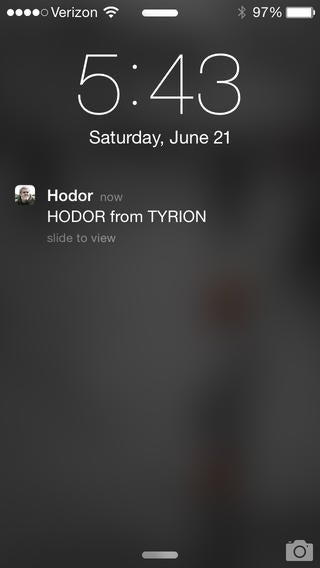 For those unfamiliar with HBO’s dragons ‘n’ rape show and/or the shaggy fantasy book series source material, Hodor is a recurring character in both, played by Kristian Nairn in the show. He has an unnamed and seemingly untreated condition limiting his speech to just one word, which is his own name, “Hodor”. He is the servant/ human rickshaw for the “good-guy” family, the Starks, although their total disinterest in getting Hodor a speech coach is never mentioned as a mark against their supposedly noble outlook on life. Regardless! Now you can bring that same impediment to your phone, and those of your friends. [TechCrunch]