The last few months have seen a crushing wave of Snapchat imitators, pretenders to the ephemeral throne. And every one of them has completely missed the point.

There's a reason Snapchat's become so popular, and it's not just because it was first. Yes, it's only a vague likeness of real, human interaction, but it's a likeness nonetheless. You get real-time(ish) conversation; options to add messages; and of course, the profoundly trendy impermanence of what our grandparents once referred to as "talking." It's quick, dirty, and commitment-free.

It's not surprising that other app makers are desperate to ape Snapchat's success. The only problem? They're stealing all the wrong parts.The most recent Snapchat competitor is Slingshot, Facebook's second attempt in the ephemera game. It's also one of the worst offenders when it comes to emulating Snapchat's less appealing qualities. Whereas Snapchat's interactions consist of actual back-and-forths in single-serving portions (you know, like how people talk in real life) Slingshot goes for more of a back-and-forth-and-forth-and-back-forever model. You can't actually see what you've received until you send something back to the person who initiated. 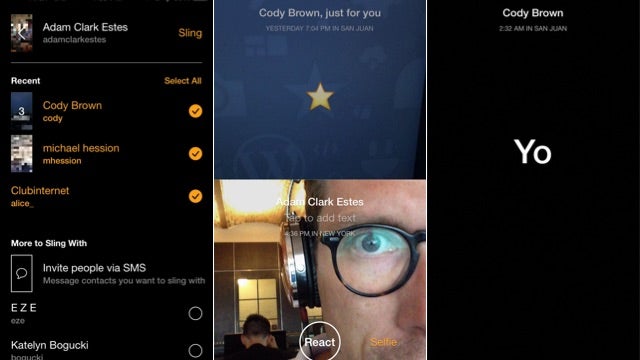 I hope that "Yo" was worth it.

This means that if you want to react to a photo, you'll ultimately be sending two photos their way, which your friend won't be able to see without sending another photo your way. What's more, your pre-response responses are inherently contrived. Sound confusing and annoying? It is! Actual conversations don't require tolls.

Facebook isn't the only one doing it wrong, though. One of the more popular Snapchat alternatives, Frankly, severely misinterprets what Snapchat does right. When you send a photo or video on Snapchat, simple drawing and text tools let you add a bit of meaning to your fleeting photos. There are whole Tumblrs and Instagrams devoted to the phenomenon. People like it. They should! It's fun. But Frankly attempts to capitalise on that by making disappearing messages that put even more emphasis on text. You can change background colour, text size, font, length, a whole army of options to let you create the perfect image. 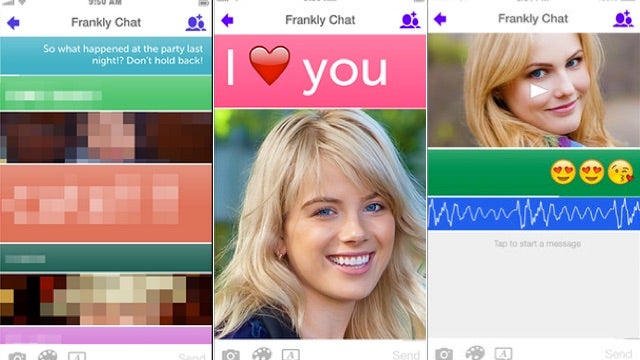 And you have exactly 10 seconds to take all that in.

Unfortunately, no one wants to spend 20 minutes on something that won't even last 20 seconds. Snapchat's text works because it is so limited; no one minds destroying something they have barely had to put any thought into.

It gets worse. A recent, lesser known addition to the ring of Snapchat clones, Sobrr, wants to bring all that beloved ephemerality to your entire friendship. Photos, videos, voice messages — everything lasts a mere 24 hours, whether or not you've even viewed what has been so lovingly sent your way. It's not just content that's fleeting, though; even your friendships last no longer than a day. After 24 hours, you'll be given the option to either toss them aside or, if you're feeling benevolent, to keep them on for another day. 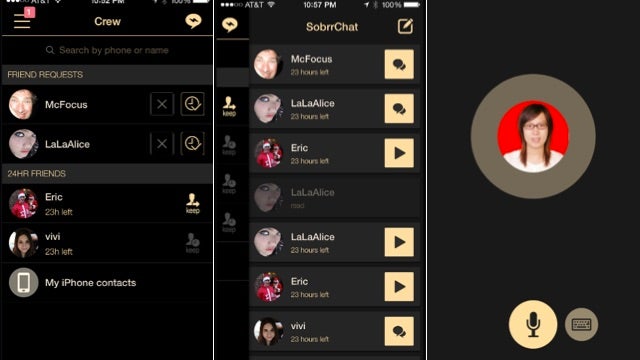 That can't be good for your confidence.

Sobrr seems to lean more on Snapchat's sexting potential than the others, but its problem is the same. Snapchat's self-destruction is so appealing because there's no pressure to put on a front. Act like a fool all you want, the record is gone in a few seconds anyway. Sobrr, though, takes ephemera to the extreme and reintroduces the neuroticism of social media in the process. Did your friend see your message or did it die untouched? Why didn't they renew your friendship? Have they seen anything you've sent? It's uncertain in the most unsettling of ways: You've never been so easy to ignore.

What all these apps don't get is that Snapchat is, like all deceptively simple things, greater than the sum of its parts. And, crucially, that most of those parts are actually pretty terrible when singled out from the pack. Barraging people with messages, destroying something you've put effort into, taking advantage of internet anonymity — they all sound pretty bad laid out. They work in Snapchat, though, because no individual part has ever been the sole focus, but rather come have come about as symptoms of Snapchat's larger goal.

But when you latch on to one of those aspects and magnify it — as all these apps have done — the problem only gets worse. Snapchat works because it's true to its mission of imitating real life's fleeting moments as closely as you can on a five-inch screen. Which, while not perfect, is certainly better than imitating the imitation itself.