The limestone cliff holding up a luxury home overlooking Lake Whitney in the US began to crumble earlier this week. There was no saving the house, which had already started its descent to a watery grave. Demolition was the only option, and officials decided the best method was to kill it with fire. It's not as crazy as it sounds.

The Texas half-house was loaded up with hay bales doused in diesel fuel. Windows were broken and holes were knocked out in walls to help things get going, and the whole thing was set alight. 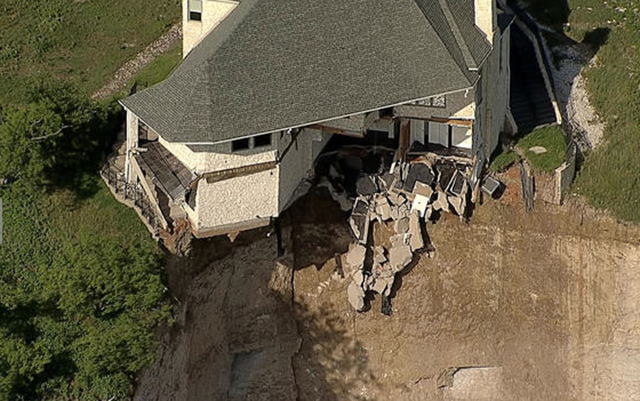 This was, according to NBCDFW, the best of three options. The other two? Wrap a massive net around what remained intact and somehow pull the whole thing away from the edge — which reminds me of something the townsfolk of Itching Down would come up with in an update of The Giant Jam Sandwich — or simply allow it to drift down to the shore in its own time, then recover the debris — which seems like it would set neighbours on edge. Can you imagine knowing the spot next door was definitely going to go boom at some point, but having to wait until the foundation gave away just so?

But today's fire wasn't a last-ditch effort. In fact, it's called a controlled burn — and it's used every now and then by demolition and fire crews to safely get rid of dangerous constructions. For example, if a building is structurally unsound, a controlled burn can be used to demolish it rather than expose workers to danger. The process can also be used to give firefighters a way to train, by "donating" these condemned structures to the department — which is how officials safely took down a grandstand in Austin last year. The controlled burn we saw today was also motivated by safety concerns. Would you rather send a crew of experts into a house slowly falling apart, or turn it into ashy debris that can be cleaned up quickly when it's all over?

It's also much, much quicker than traditional methods, which can sometimes take months. Apparently disposing of the charred remains was the cheapest solution, and the owners — who evacuated weeks ago, and reportedly spent their retirement savings on the site itself (which is heartbreaking) — will be responsible for the cost. Could this be our generation's exploding whale? [Mashable]