The fact that our poor oceans are overflowing with our disgusting floating garbage is not news, but we keep on keeping on disposing of a crazy amount of non-biodegradable trashola — and lightly worn wardrobes. A new project called Your Shoes Are Rubbish represents one small step towards increasing awareness of the massive problem; these kicks were made entirely from washed up junk.

Creative pals Charles Duffy, William Gubbins, and Billy Turvey came together to offer a new take on our love-'em-and-leave-'em relationship with consumer goods. Gone are the days when taking something in for repairs trumps buying anew. For example: When your footwear fails — even the tiniest bit — you're more likely to toss them in the bin than take them to a cobbler for a fix. In this, and many other ways, we're leaving behind what the trio describe as a "rubbish legacy" — which, let's face it, is a bummer of a way to be remembered.

So they gathered up plastic bits from England's coasts and the banks of the Thames, brought it into the workshop, and transformed it into a fully-functional conversation piece, using a manufacturing process that's a nice mix of industrial tech and hands-on craftsmanship.

The result looks a bit like the remnants of the splatter-paint booth at the fair, and you know what? I dig 'em.

The three present the project as a "satirical critique" — more talking point than grand plan for clearing up our salt water supply, complete with faux-ads emblazoned with a message disguised in pop-culture branding — but more and more designers are tackling the pollution problem on a small scale. 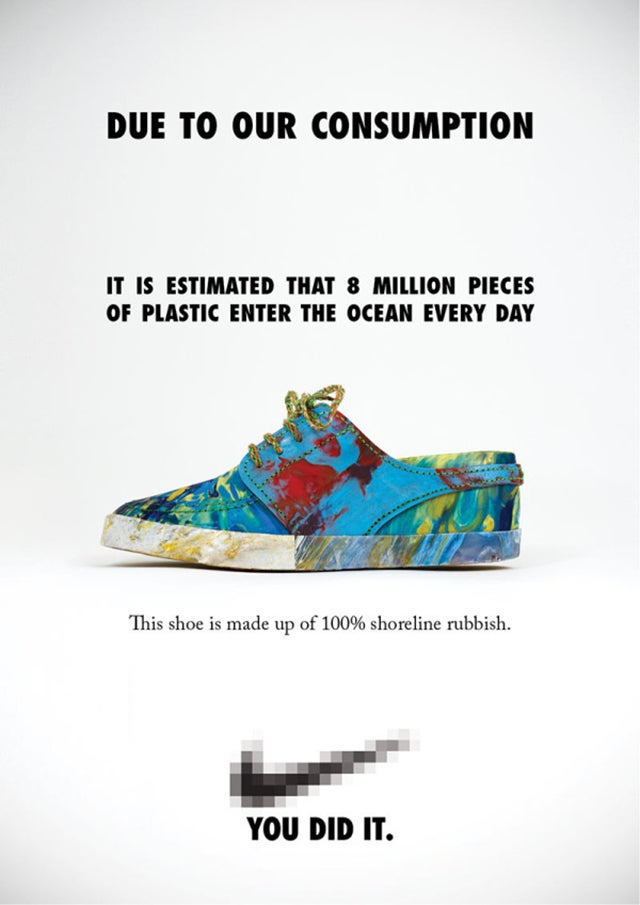 We've seen everything from glowing dogs and open-source chairs made from found plastic, as well as lots and lots of balls recovered from the briny tides. If Dyson ever gets the giant M.V. Recyclone vacuum barge up and running, perhaps the future will bring a sea change of sorts, and more products will be composed of old products, rescued from the depths. [Design Milk]