Watch Dogs Benchmarked: How Does Your PC Stack Up? 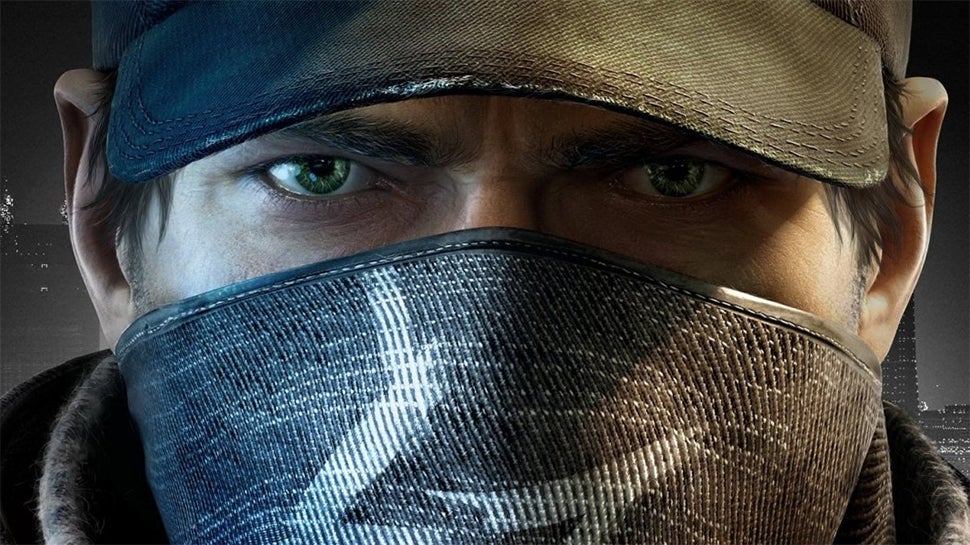 Set in an alternate reality techno-dystopian Chicago, Watch Dogs hit every gamer's Christmas wishlist after appearing at E3 2012. The open world hackfest wowed onlookers with its urban stealth action and its seemingly 'next-gen' graphics. Unfortunately, a month before its November 2013 release the game was delayed for another six months — the short-term blowout of which caused Ubisoft's stock to drop some 40 per cent.

Being a long-term company with a long-term vision, Ubisoft says Watch Dogs is a long-term play and so it was postponed because it simply wasn't ready. That's commendable considering how often games are released in an unfinished state just to meet deadlines and make sales. Battlefield 4, for example, was among the buggiest blockbusters to ship in recent memory yet it grossed well over $US200 million dollars last year.

Making a bad first impression wouldn't have been the smartest way to begin a new franchise, especially when the alternative is having fans wait two quarters. However, with that extra development time and nearly two years having passed since the game was unveiled, many people are wondering if Watch Dogs can live up to the hype. 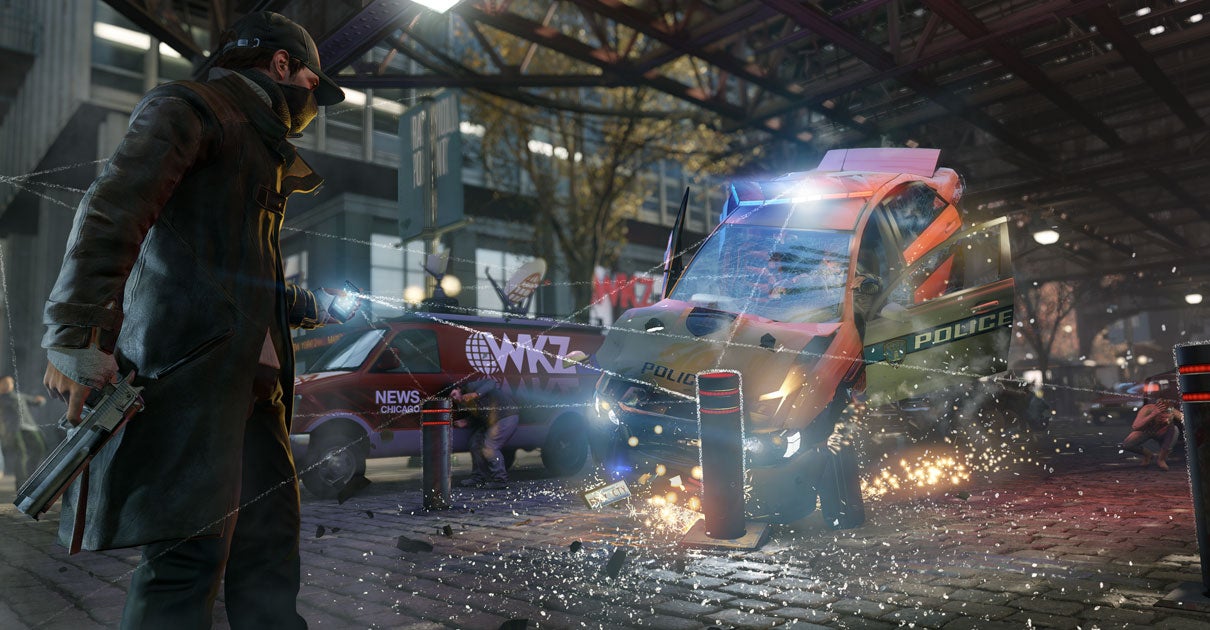 Developed by Ubisoft Montreal, the same group behind Assassins Creed, Watch Dogs has been built by the studio's new 'Disrupt' engine, which was mostly constructed from scratch but includes parts of AnvilNext and Dunia, two Ubisoft engines used in the Assassin's Creed series as well as Far Cry 2 and 3. Specifically, Disrupt's open world city management comes from AnvilNext while its vegetation and AI are from Dunia.

There was a lot of controversy surrounding Watch Dog's graphics approaching its launch but it appears to have been based on a few videos, not firsthand gameplay. Some gamers believe Watch Dogs looked better back in the 2012 E3 trailer versus more recent gameplay trailers or the graphics seen in the beta, but the former used console gameplay instead of PC and the latter was downgraded to reduce the size of the download.

Whatever the case is or was, the game looks amazing when set to ultra on the PC. The visuals are spectacular and I found myself often being drawn away from the gameplay to admire how great it all looked. Before we dive in, it's worth noting that we're also taking this opportunity to look at the latest round of R9 200 series cards from HIS, which are factory-overclocked and outfitted with the company's custom coolers.

For testing, we settled at the first save point once Aiden Pearce reaches his hide out and takes a well-deserved nap. Wakened from his slumber, he surveys the area around the hideout for criminals. We started the benchmark when we opened the door to leave.

The first half of the benchmark is a rendered scene where the perimeter of the hideout is viewed from fixed cameras and then we take a 45-second walk before the test ends at 90 seconds.

We used Fraps to record the average frame rate and the game was tested at three resolutions (1680x1050, 1920x1200 and 2560x1600) and two quality settings (Ultra with Temporal SMAA and High with FXAA) across 31 different graphics cards and 20 processors. The latest AMD and Nvidia GPU drivers were used in all tests. 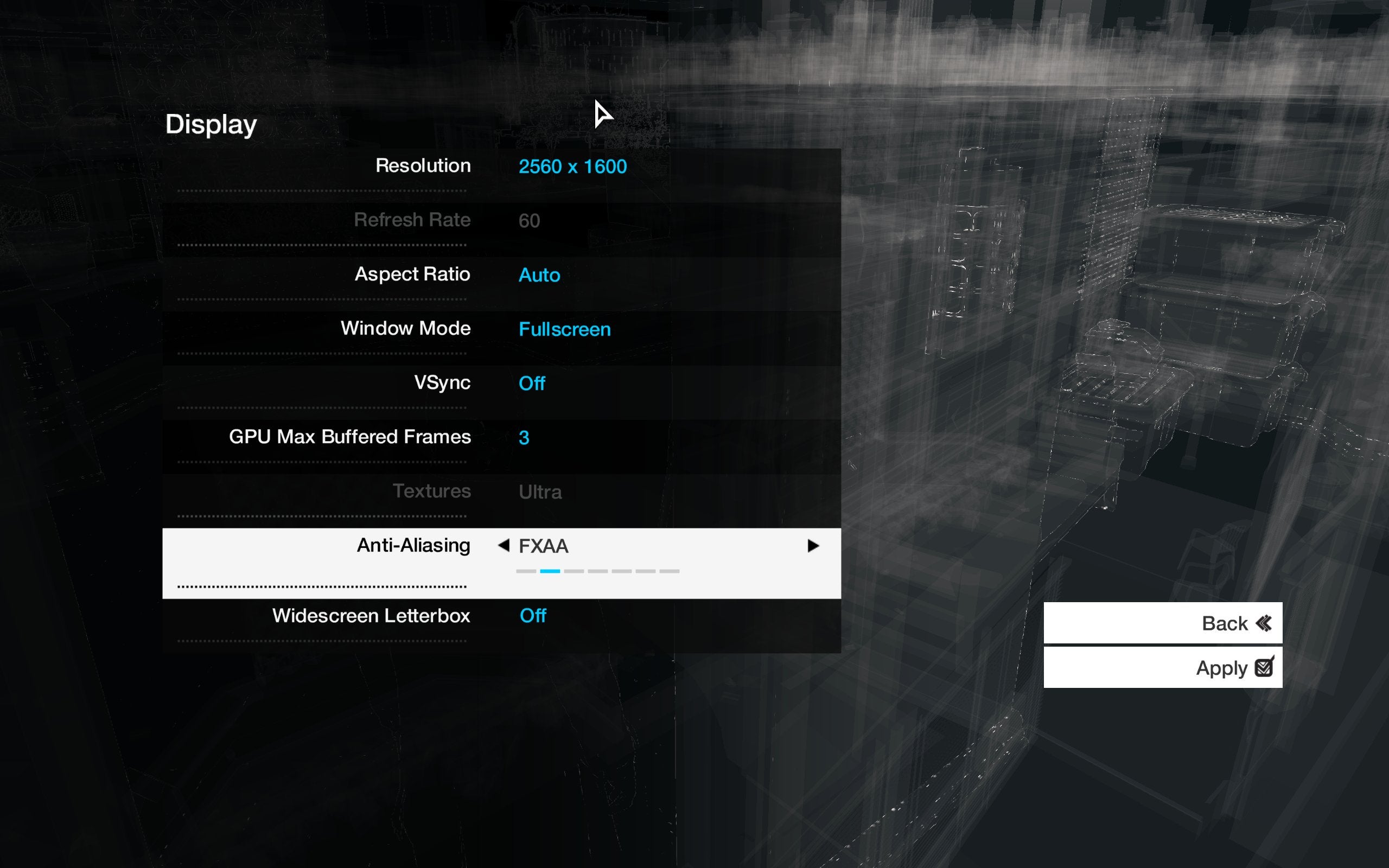 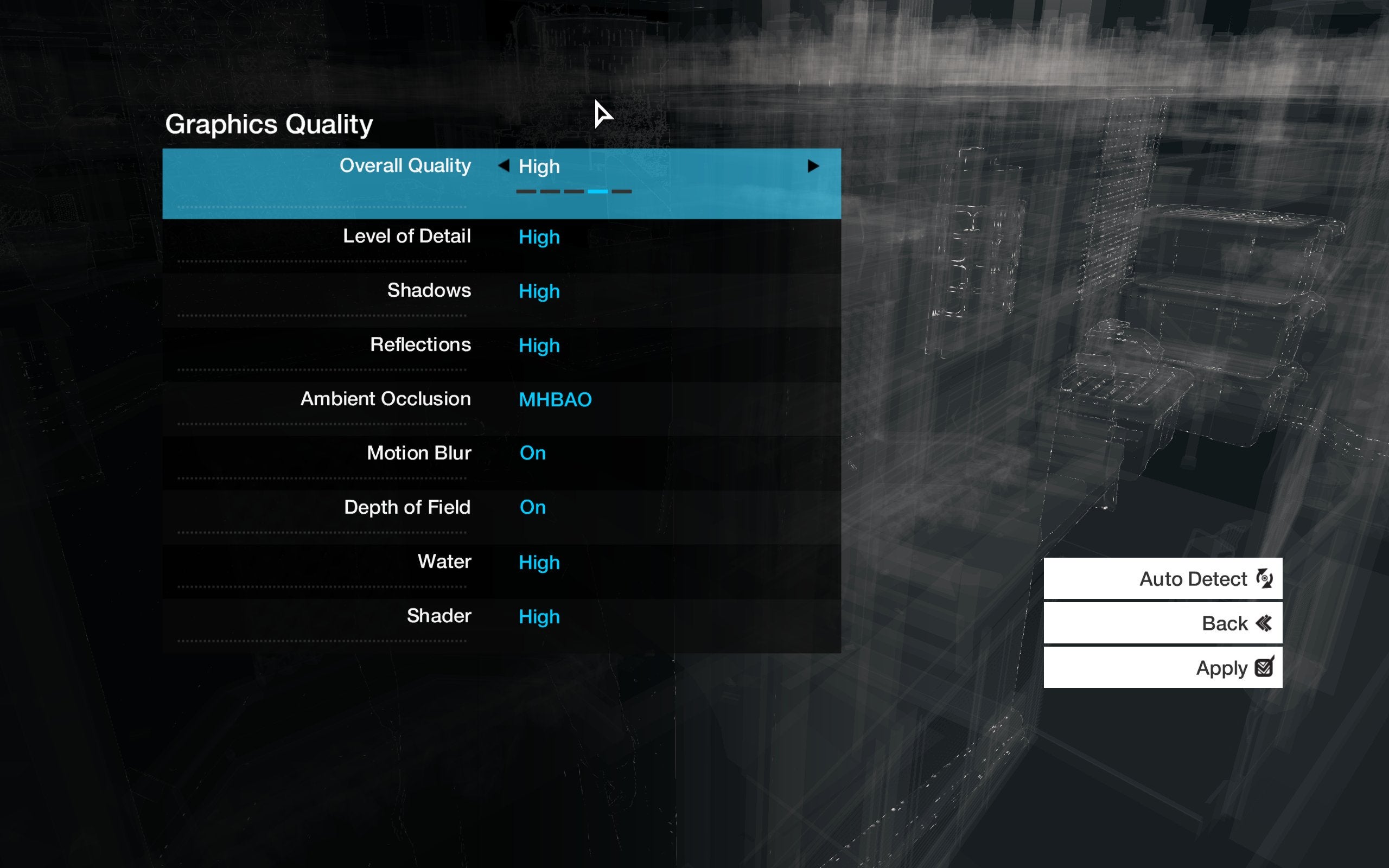 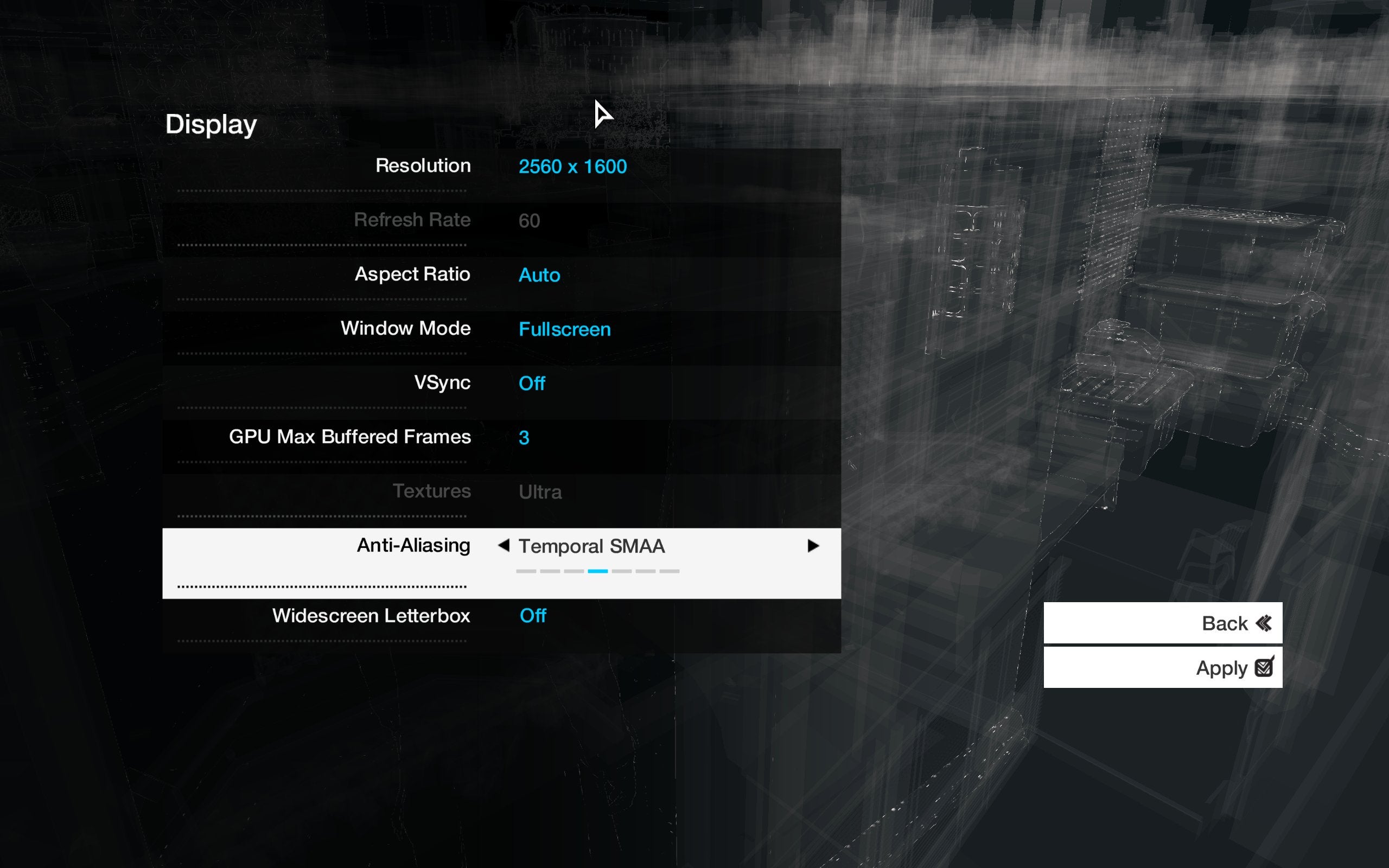 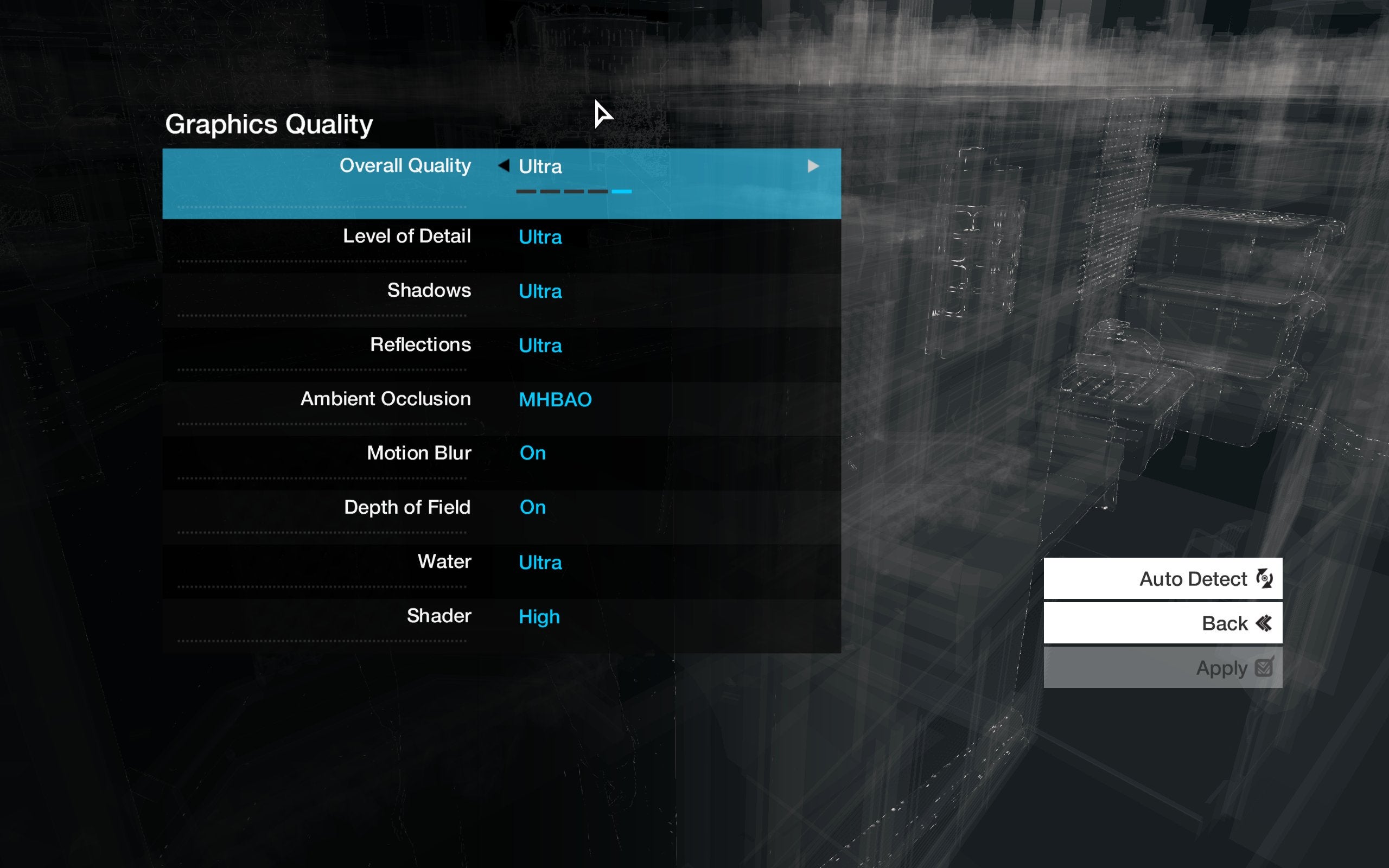 As we prepared to benchmark Watch Dogs, a herd of new HIS Radeon 200 series graphics cards arrived with updated coolers. What better way to show them off than with one of this year's most anticipated games?

Although the R9 290X was released roughly six months ago now, HIS has held off from releasing custom versions using their IceQ technology, instead pushing reference cards all this time. That's unusual, but given the limited supply of Hawaii XT GPUs and the absurd pricing of 290X cards due to crypto mining, there has been limited demand from gamers.

As pricing nears the original MSRP of $US550, gamers are once again interested in the mighty R9 290X and HIS plans to capitalise on that with its special iPower IceQ X² Turbo version. 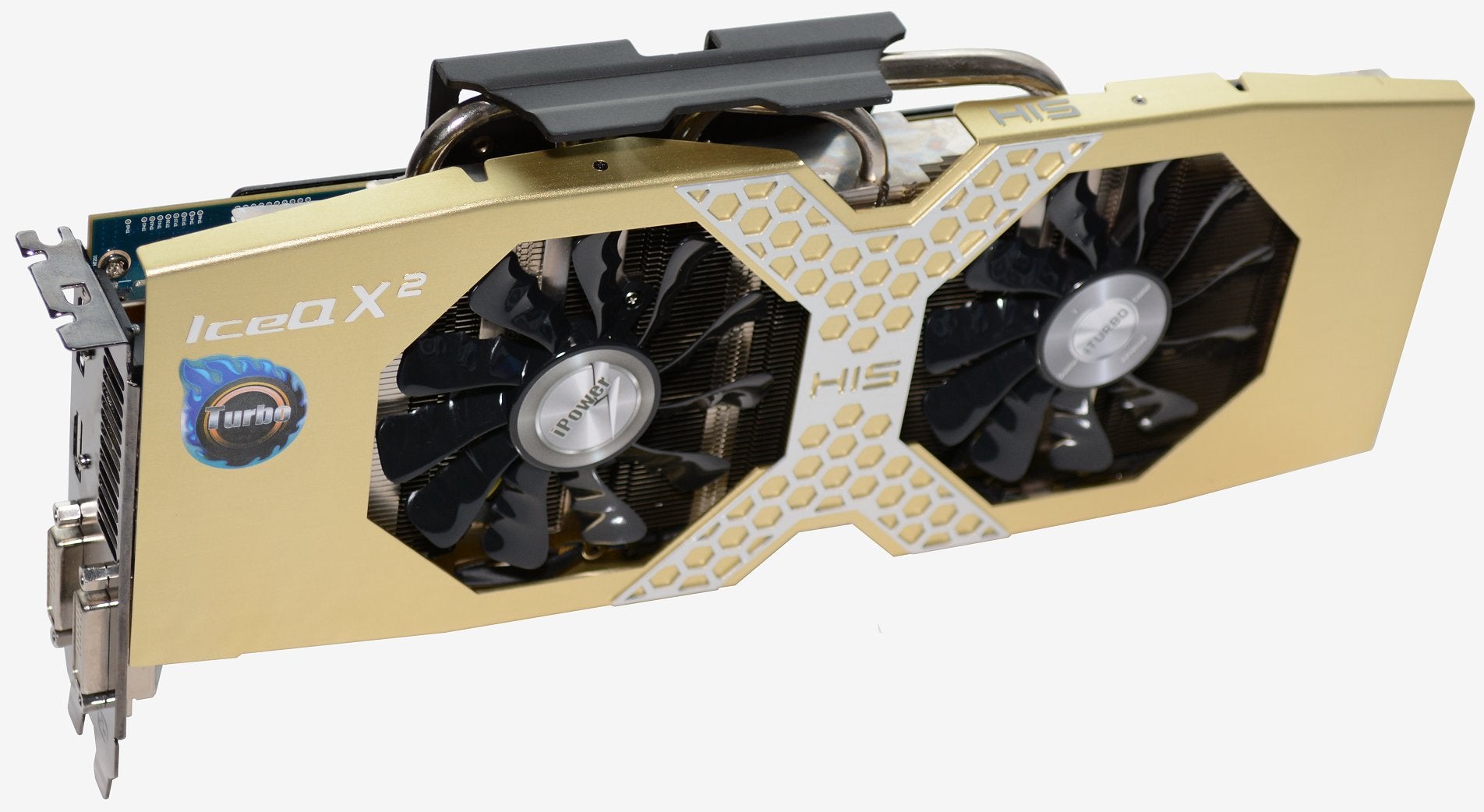 Designed to operate the core at up to 1040MHz with 4GB of GDDR5 memory clocked at 5400MHz, the HIS R9 290X iPower IceQ X² Turbo 4GB sounds much like any other 290X graphics card. Although the AMD spec calls for a GPU clock speed of up to 1000MHz, many custom built versions do operate at around 1040 ~ 1050MHz, such as the Gigabyte R9 290X OC WindForce 3X version we check out earlier this year.

However, like the Gigabyte version, this new HIS card features a completely unique cooling solution that is considerably more efficient than AMD's reference design.

As the name suggests, the IceQ X² cooling solution has been employed, though it's a slightly modified version from what we have seen previously. Built with two super large dual 89mm dual axial fans, this dual-slot cooler features a massive heatsink along with three 6mm and two 8mm heatpipes linked directly to an extra-large 40 x 47.5mm copper base where they help to improve heat extraction from the GPU.

Connected to the large copper base of the heatsink is a unique RAM heat spreader, which is designed to cool the GDDR5 modules. HIS claims that this cooler is quieter and more efficient than AMD's reference design. 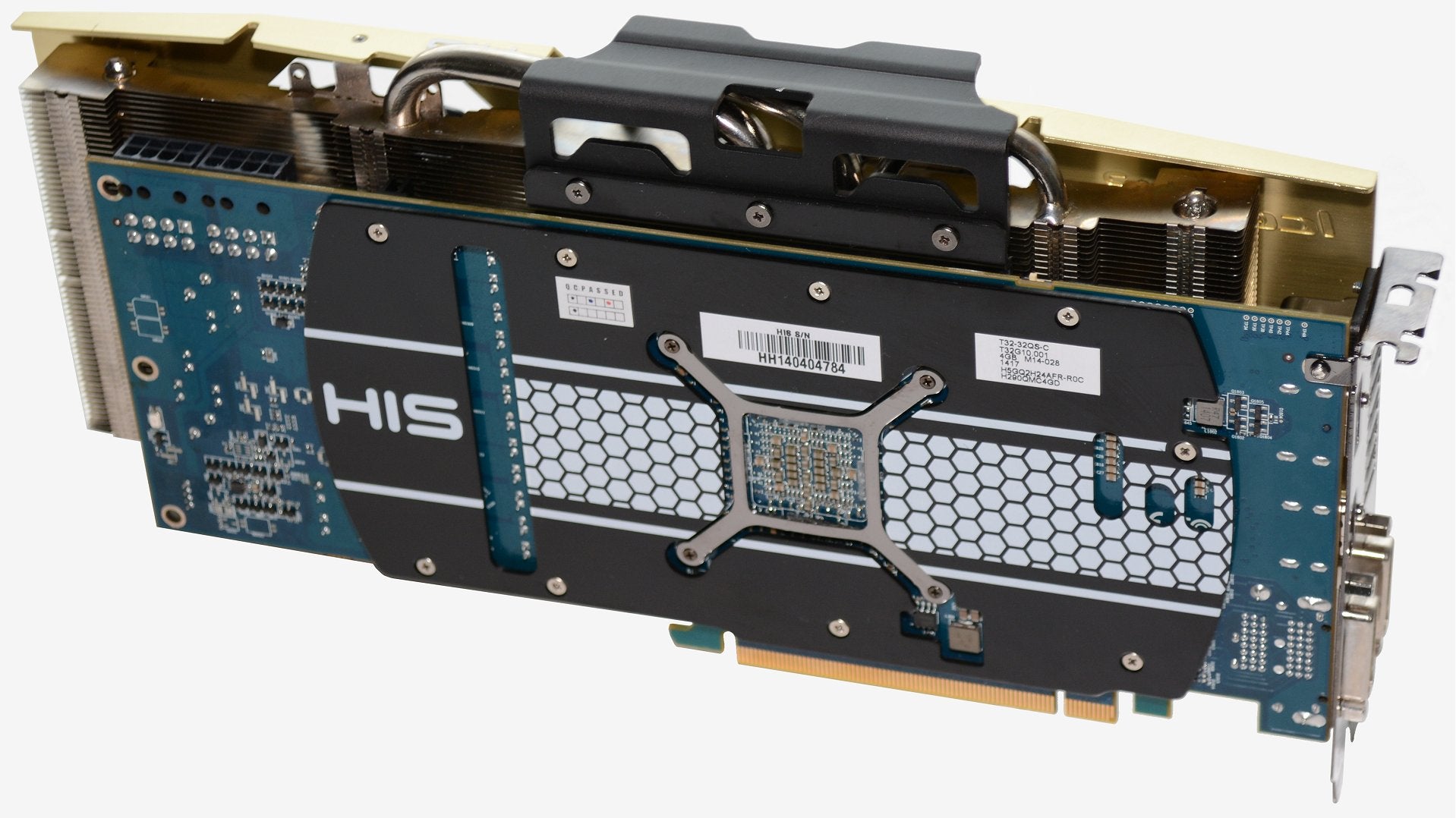 HIS has modified the original IceQ X² design to include a rear back plate that cools the memory chips on the backside of the PCB. Also attached to the heat spreader on the front is an aluminium plate that extends up and over the heatpipes. Apart from looking nice, we're not sure what this does. HIS describe it as an easy means of carrying the graphics card which seems strange.

To feed the card enough juice, HIS has upgraded the 6-pin/8-pin PCI Express power connector configuration to a pair of 8-pin connectors. This will help improve overclocking and HIS claims that the R9 290X iPower IceQ X² Turbo 4GB with its 9 power phases can deliver more power than the AMD reference design.

The HIS R9 290 iPower IceQ X² OC 4GB features the exact same cooler and design as the 290X that we just looked at. It is also mildly overclocked from the standard 947MHz to 967MHz, while the memory remains at 5000MHz with the same 4GB buffer.

HIS offers quite a few different R9 280s (the rebadged HD 7970 GHz Edition). The initial cards were released using the original IceQ cooler which were then followed by the HIS R9 280X iPower IceQ X² Boost Clock. The new HIS R9 280 IceQ X² OC features essentially the same cooler, though like the R9 290 iPower IceQ X² OC and R9 290X iPower IceQ X² it has been given a special gold paint job.

Unlike the R9 290X and 290 version, the R9 280 IceQ X² OC doesn't receive the backplate or the odd carry handle. How it differs from the HIS R9 280X iPower IceQ X² Boost Clock is in its clock speeds or the core and memory which have been downgraded. The core operates 3MHz slower, while the memory is 1000MHz slower. 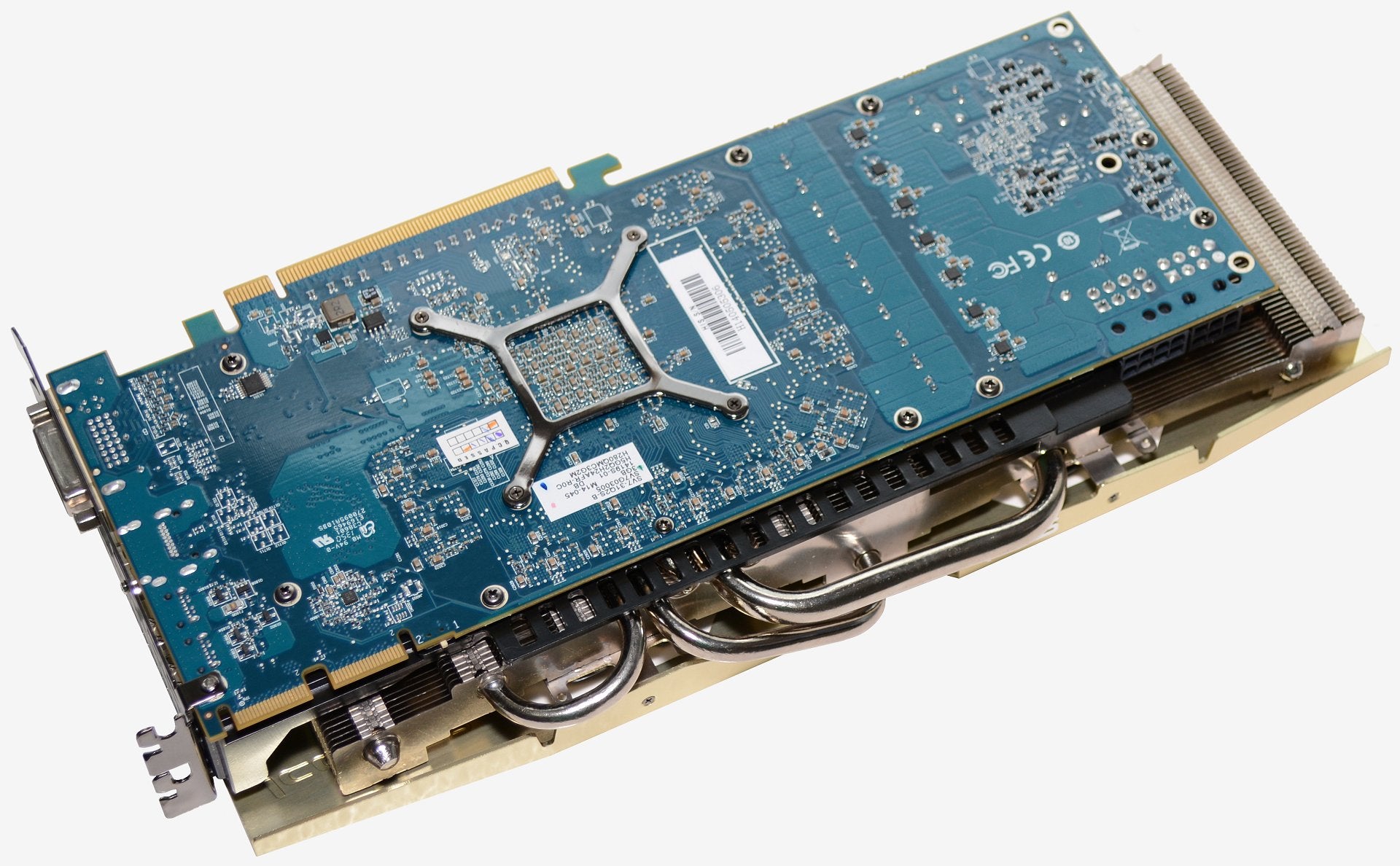 This is basically a base model 280X with a new cooler from HIS, yet it costs the same amount as the heavily overclocked HIS iPower IceQ X² Turbo Boost Clock version.

As is the case with the R9 280X, HIS has already come up with a number of R7 260X cards, there are now seven in total with three different cooler options. The latest iCooler version comes in 1GB and 2GB capacities. 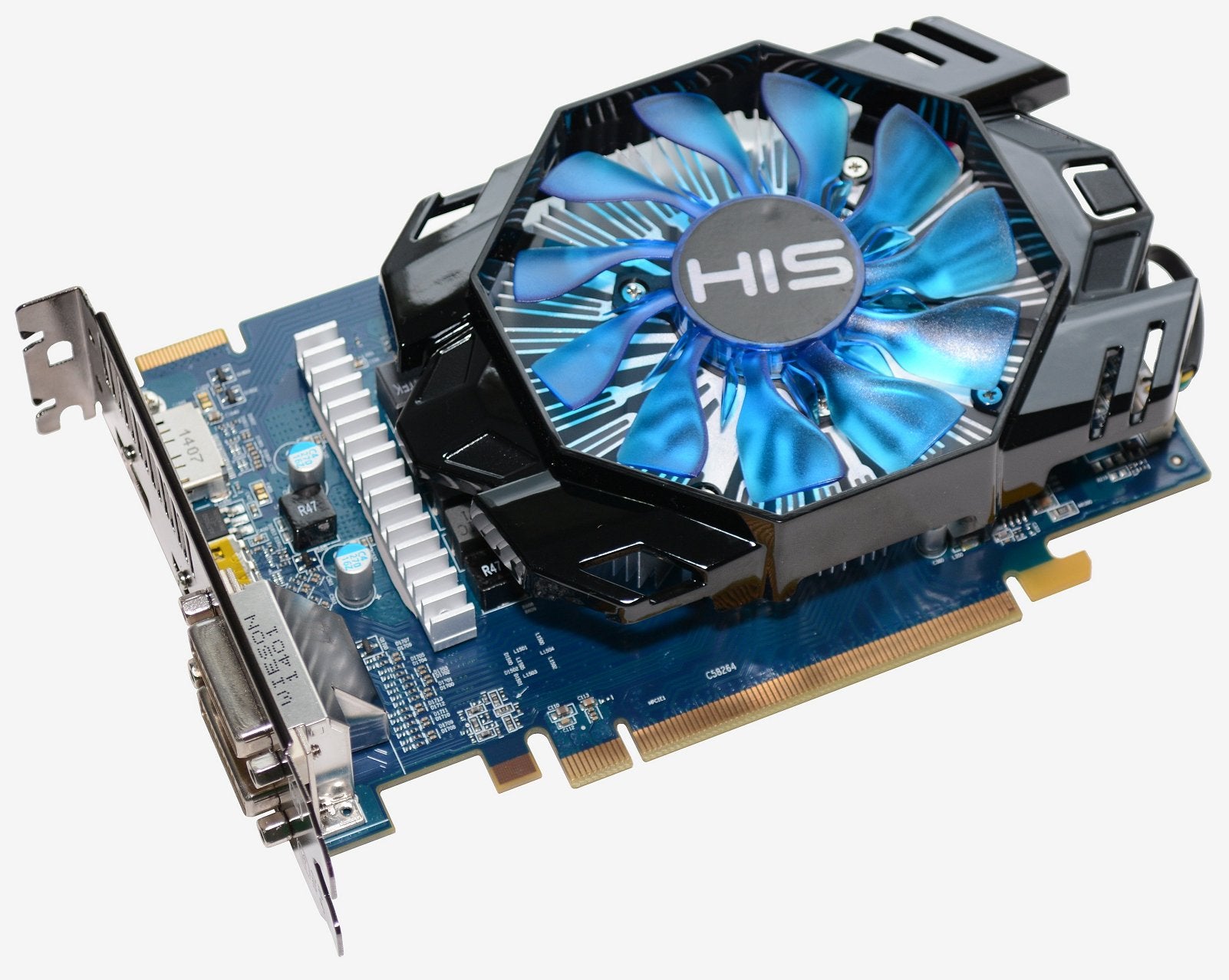 The iCooler is a cost effective design that is much smaller than the IceQ X² used by other R7 260X cards in the HIS line-up. 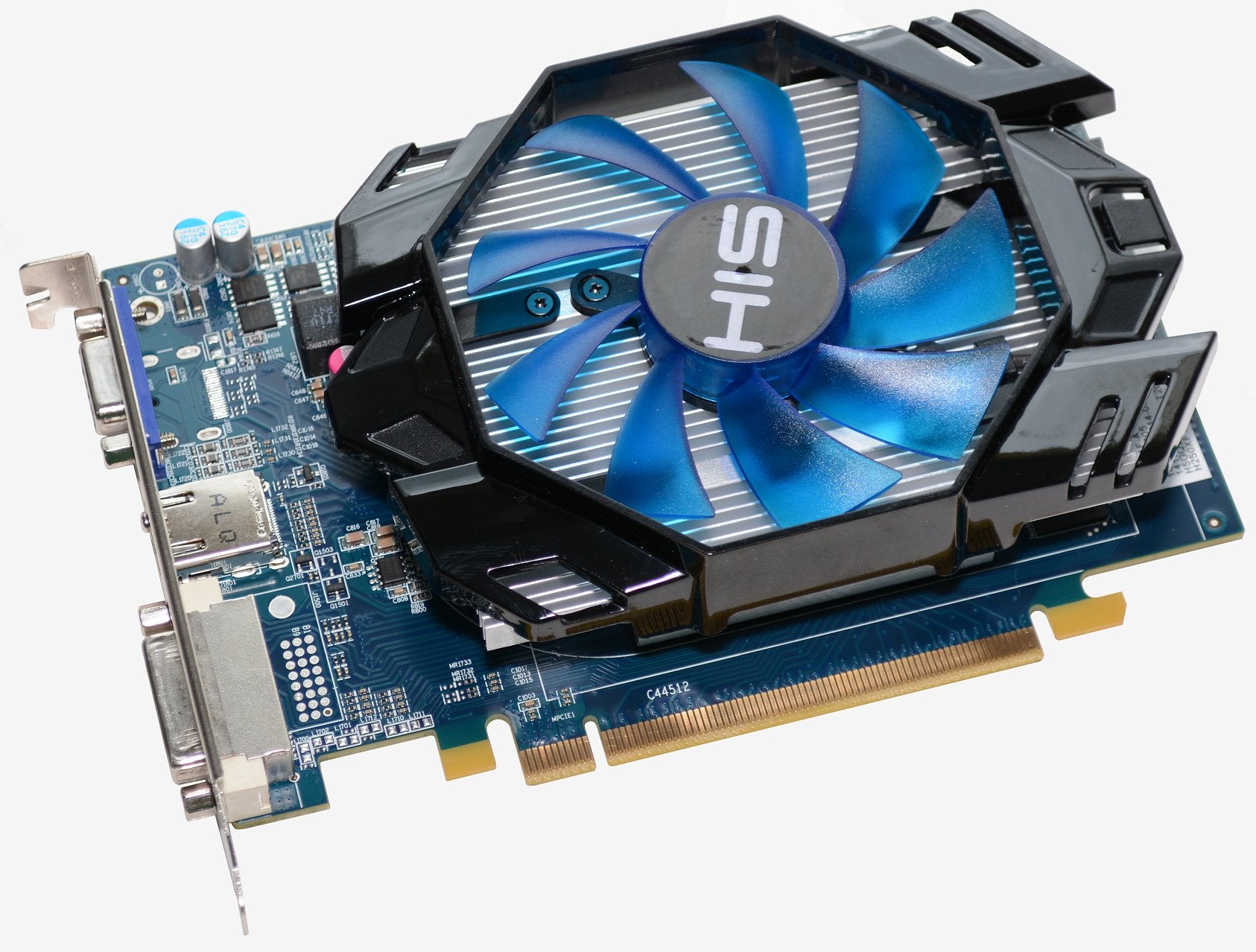 HIS has followed those specs completely, offering a 1GB version using their iCooler solution. The iCooler used on the R7 250X does differ to the version used on the more expensive R7 260X. The R7 250X features a more traditional heatsink whereas the R7 260X uses an elaborate looking spiral heatsink. The fan is also much more basic featuring standard fins whereas the HIS R7 260X iCooler uses wavy fins. 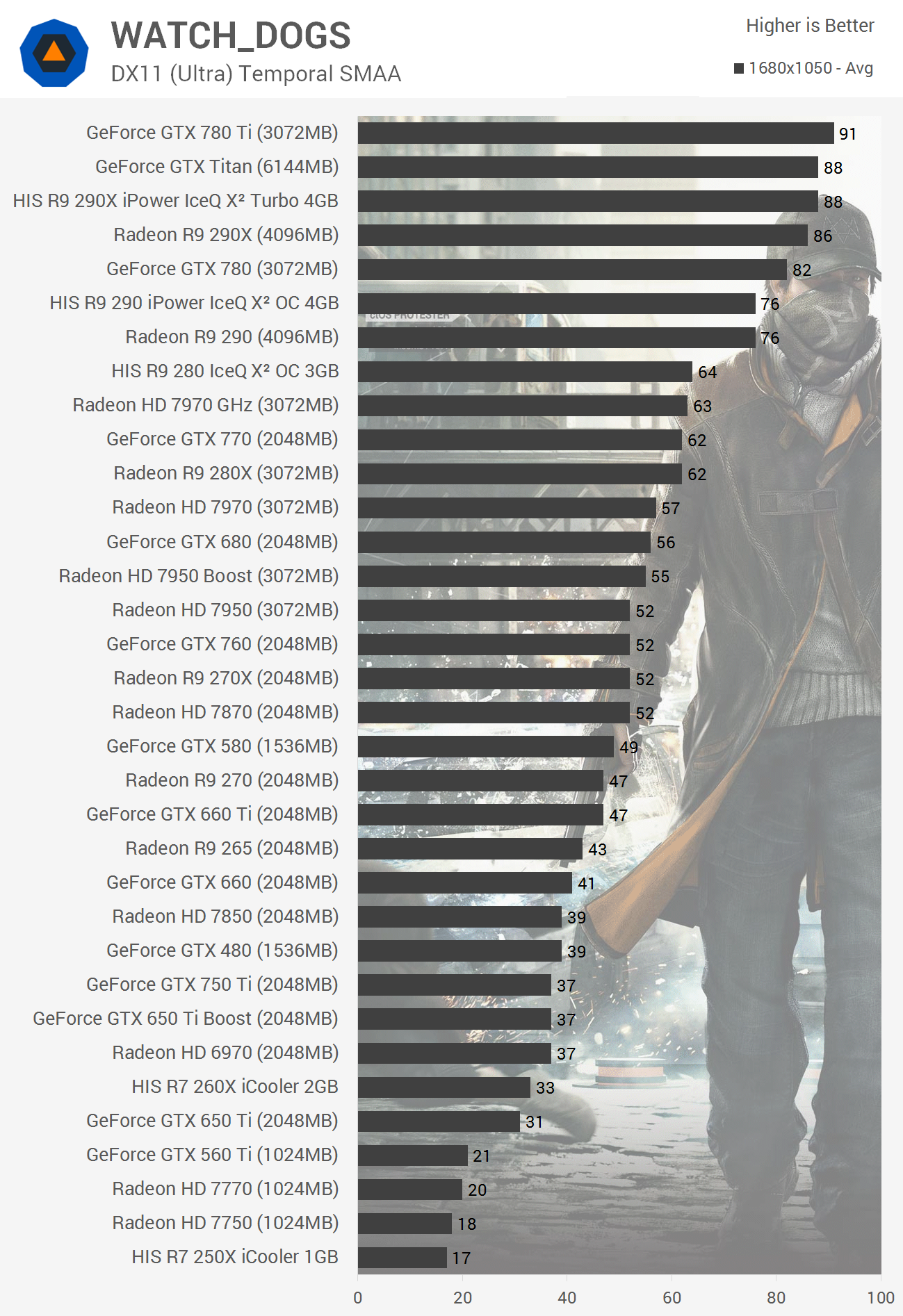 With everything turned up using the ultra quality settings with Temporal SMAA, Watch Dogs is very playable with mid-range GPUs at 1680x1050. Starting with the higher end models, the GTX 780 Ti had no trouble delivering 91fps while the GTX Titan and HIS R9 290X iPower IceQ X² Turbo 4GB averaged 88fps. A standard R9 290X was good for 86fps, which was quicker than the GTX 780's 82fps. 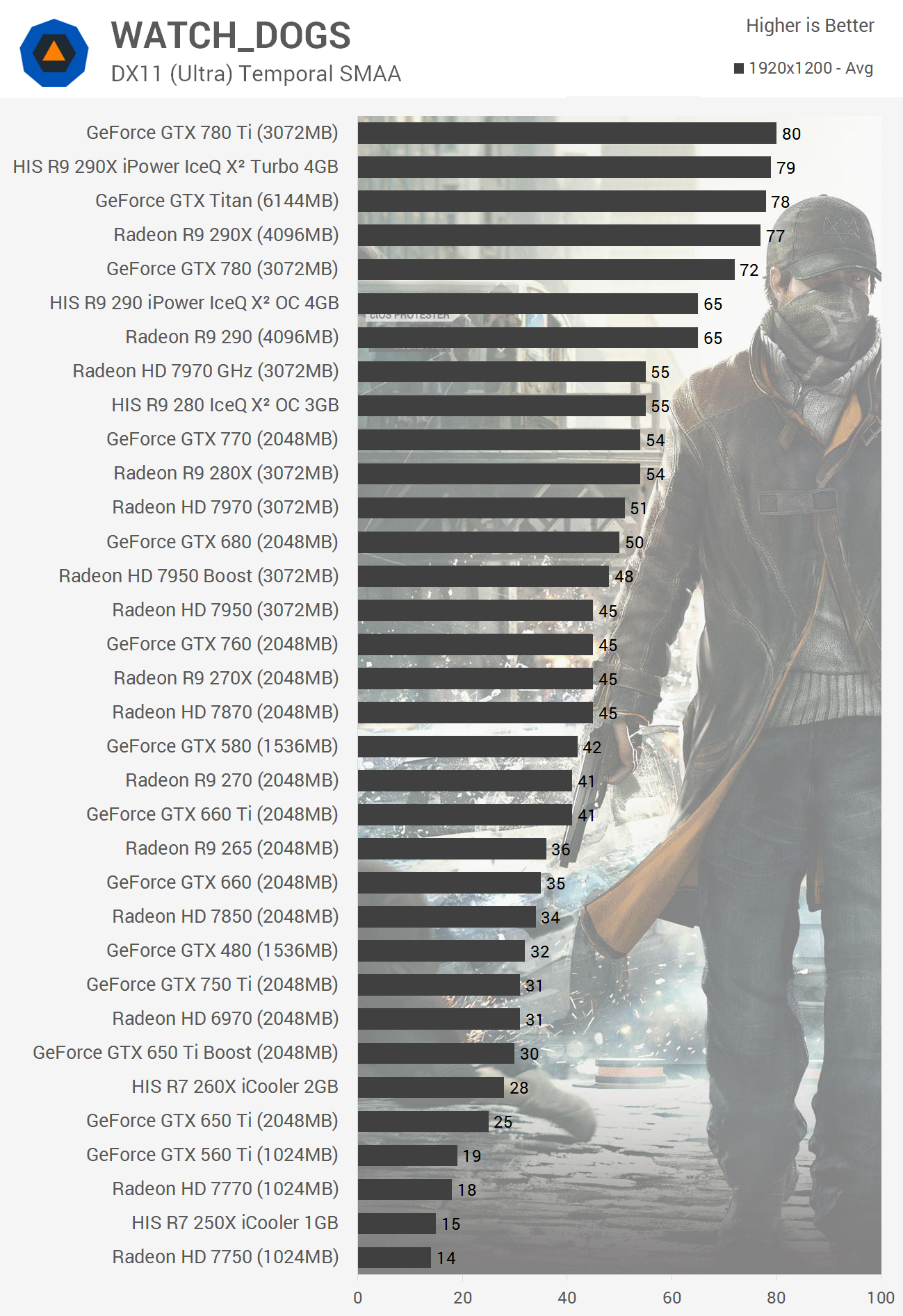 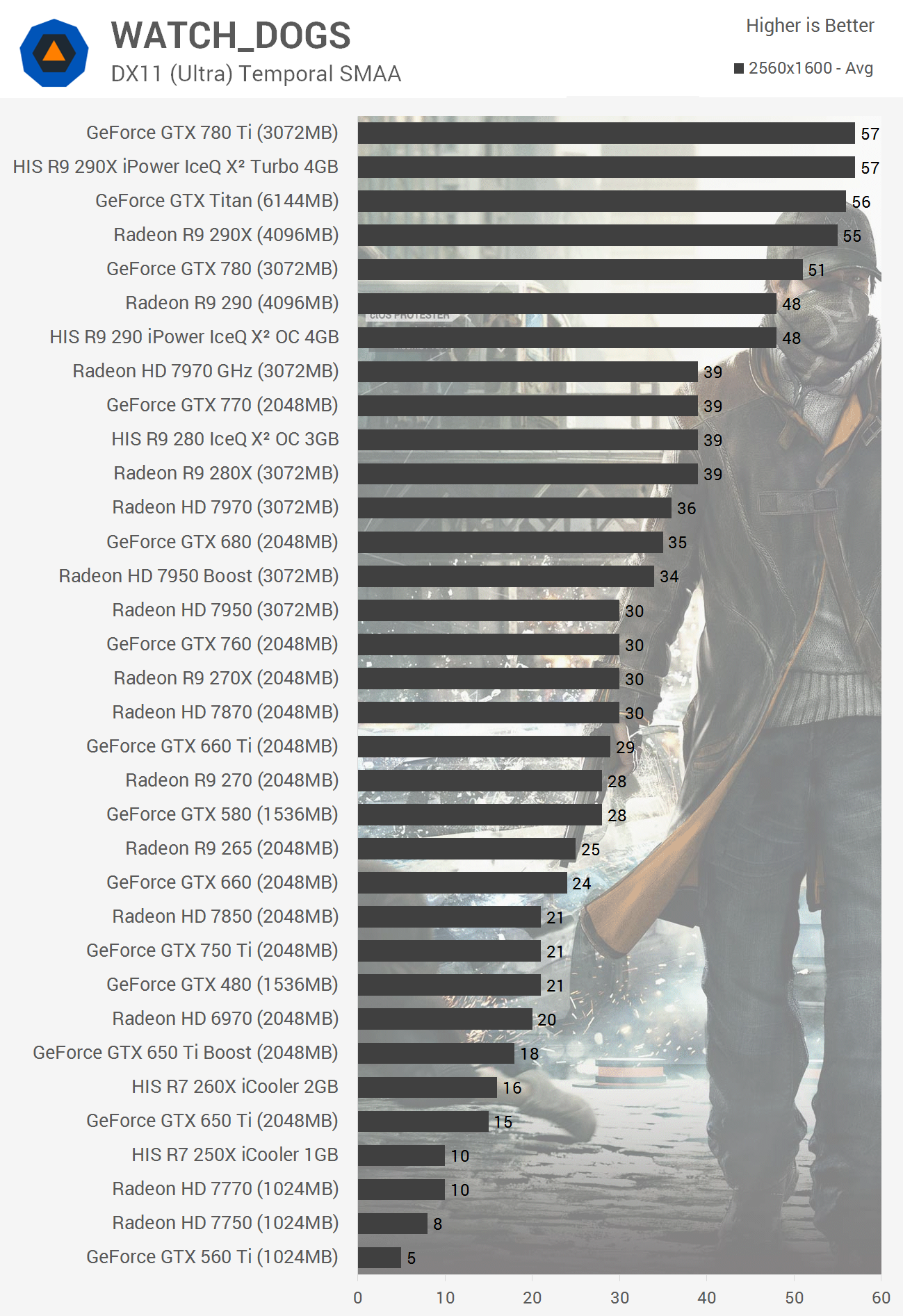