If you've been enjoying any of the World Cup matches over the last several days, you've likely seen a new addition to the referee's arsenal: a spray-on foam. And if you're not a soccer expert, you've probably wondered where it came from.

So what is this stuff and how do I get it off my shoe?

In soccer, when a foul is committed outside the penalty area, a free kick is given and the opposing team must stand at least 10 yards away from the spot where the foul was committed.

Sounds simple enough, and in olden days, referees might estimate the distance visually or even measure it out precisely if the kicking team requests it. However, for the first time in a FIFA World Cup, referees are not only measuring the distance, but marking both the spot of the kick as well as the 10 yard minimum for opposing players. 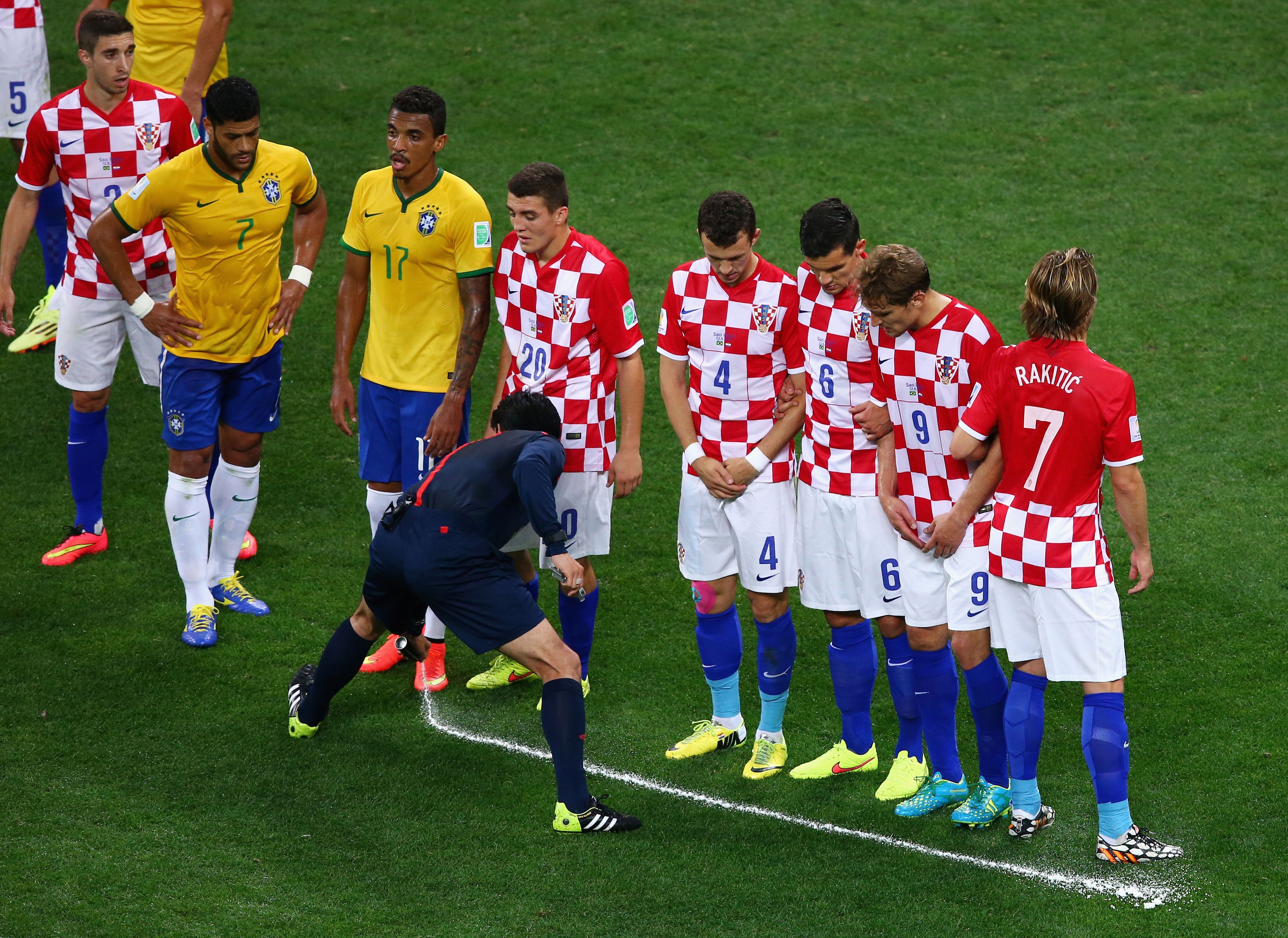 Referees mark these spots with a foam called 9.15 Fair Play, a vanishing spray that disappears only minutes after use. It was developed by an Argentine journalist by the name of Pablo C. Silva, who dubbed the spray "9.15" because of its conversion from yards to meters (10 yards = 9.15m).

But why is it necessary?

Presumably if you're playing at this level, you've witnessed a free kick or two in your career, and you know that you aren't allowed to break the 10 yard rule. However, with the egregious dives and fouls committed, you can bet that even these world class athletes bend the rules. In fact, that's why Silva invented this spray in the first place. In an amateur league in Argentina, he was consistently watching opposing players encroach on his precious 10 yards. The referee repeatedly did nothing, so he invented the spray to maintain the distance. And while facsimiles have existed before, Silva's patented spray was chosen to debut at the World Cup in Brazil.

Why is it important?

Like the federal government, the FCC, or just your average mum and dad, FIFA is a fan of over-regulation — and is only overbearing because it loves you so much. Therefore, to keep order and best uphold the rules, FIFA is starting to institute more regulations that allow for fair play. 9.15 Fair play and Goal-line technology, which could've been used after some controversial plays in 2010, are perfect examples of this.

However, I believe these gradually tightening restrictions may eventually kill the beauty of the game. First we're using technology to tell us when a goal has been scored. Then we're using a chemical foam to enforce a rule that refs have been responsible for remembering for decades. What's next? How long until we end up watching robots play soccer? [Core77; Business Insider Australia]