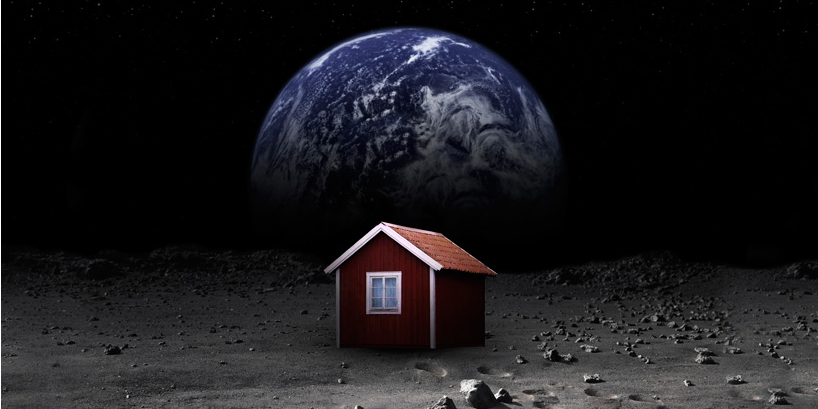 Of course it takes a whole lot to make that possible. First there's the matter of the house. So far it's been 75 per cent designed, and the idea is that the house's carbon frame would be covered in a thin space-cloth, and somehow build itself through inflation as the whole thing is pumped full of gas.

Then there's the matter of delivery. Genberg and his space-house cohorts plan to work with the Pittsburgh-based Astrobotic Technology, which is planning to make a strike at winning Google's Lunar X-Prize by being the first private company to put a rover on the moon. Astrobotic is already planning to bring along a sports drink, so a small house doesn't seem much more ridiculous, if a fair bit heavier.

But it's far from a done deal. Genberg tried this before in 2009, though the plan never got off the ground thanks in part to the financial crisis and in part to the general lack of available trips to the moon. This time though, the team has crowdfunding on its side and is asking for 15 million dollars (!) to make the ludicrous dream come true.

According to the minds behind the the Moonhouse:

The Moonhouse seeks to inspire people to push through our mental boundaries and change the perception of what is possible. Everyone in the world has their own personal Moonhouse — a representation of challenges and goals and how we achieve them.

Uh, sure! In reality it sounds like a really expensive way to get a few funny photos while simultaneously defacing the surface of the moon with absurdity. But if you're into that, the project has 183 days left to meet its 15 million dollar goal. Hop to it! At least the Wi-Fi up there is pretty good. [The Moonhouse Project via Designboom]