Mystery Solved: This Is The Monster That Ate That Great White Shark

featurenatureScience & Healthsharks
To sign up for our daily newsletter covering the latest news, features and reviews, head HERE. For a running feed of all our stories, follow us on Twitter HERE. Or you can bookmark the Gizmodo Australia homepage to visit whenever you need a news fix.

It wasn’t the Kraken. It wasn’t Godzilla. And it wasn’t even a rabid killer whale. The mysterious animal that had killed and eaten the 2.7m great white shark and had stumped scientists turned out to be a super predator feared by even apex predators like the great white shark. So what was it?

According to the researchers who investigated the puzzling case, it was a “colossal cannibal great white shark”. 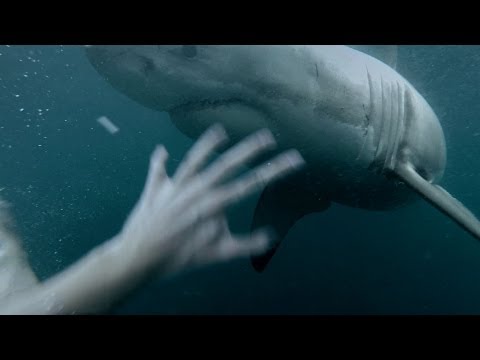 Also: Swimmer’s GoPro Video Of A Shark In Sydney Harbour: Real Or Fake?

We found that the original YouTube video we posted this morning belongs to the documentary The Search for the Ocean’s Super Predator, produced by the ABC.

The documentary narrates the scientific effort to catalogue Australia’s great whites and the search for the killer of a 2.7m great white, tagged just four months earlier with a tracking device that recorded location, depth, and temperature. When they found the shark’s “black box” on a beach, the data contained inside bewildered the scientists. Everything indicated that something huge ate the shark. But what could do something like that?

It was only after further study of the bigger migrating great whites that came into the area where the shark was killed when they finally could guess the identity of the mysterious killer.

The scientists claim their new research data matched all of the tracking information from the disappeared shark: The body temperature of these migrating great whites was the same and the size of the cannibal great white shark — which they estimated to be 4.9m long and weigh over two tons — could easily pull off the same speed and trajectory captured in the tracking device.

It makes sense: The only thing that could reasonably eat a shark is something that resembles a shark, only bigger. The bigger the shark, the bigger the bully. The documentary goes on to show how smaller sharks immediately vacate the waters when they sense a giant one is nearby. Well, that and krakens and kaijus and secret weaponised alien megalodons.

As for why a larger shark would cannibalise a smaller shark, the documentary suggested theories about how it could have been attacked. Maybe it was a territorial dispute. Perhaps even a hunger induced attack. Finally it settled on a hypothesis that makes the most sense to me: Big sharks eat little sharks.