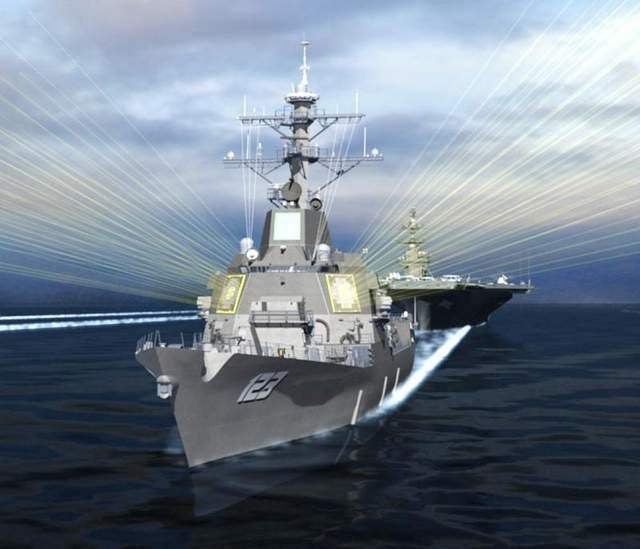 As the number and variety of air, space and surface-based threats to our naval fleets continue to proliferate, defending against them all is getting harder and harder. But equipped with this new unified threat detection system from Raytheon, our Arleigh Burke-class destroyers will know what's coming from 30 times farther away.

Dubbed the Air and Missile Defence Radar, this system is built to detect virtually any incoming threat above the waves — whether it's skimming the surface, streaking in from 20,000 feet, or has just re-entered the Earth's atmosphere. It does so through the combined use of S-band and X-band radar apertures contained within a series of 227-litre containers called Radar Modular Assemblies. These RMAs can be stacked and fitted together like Lego bricks to meet the individual needs of each ship in the armada — and the more that are installed, the more powerful the array will be. This will be the first such scalable radar system ever employed by the US Navy.

It's also far more accurate than the AN/SPY-1D(V) radar found on modern naval destroyers — 30 times more accurate and 30 times more sensitive, to be precise. It can also handle 30 times the number of inbound threats or outbound countermeasures as today's radar systems can. All of these functions are handled through the system's back-end controller which runs off-the-shelf, fully-programmable x86 processors (which should prove much less costly to upgrade in the future).

The Navy has selected DDG-51 Flight III, one of the Navy's new Arleigh Burke-class destroyers, to receive the initial AMDR system at the start of 2016. Which, at the rate things are going these days, could be right in time for World War III. [Raytheon]

Manal Mohammed and Andrew Millard 23 Jan 2020 5:00 PM
The world is in the midst of a global “superbug” crisis. Antibiotic resistance has been found in numerous common bacterial infections, including tuberculosis, gonorrhoea and salmonellosis, making them difficult – if not impossible – to treat. We’re on the cusp of a “post-antibiotic era”, where there are fewer treatment options for such antibiotic-resistant strains. Given estimates that antibiotic resistance will cause 10 million deaths a year by 2050, finding new methods for treating harmful infections is essential.