IKEA Knows All About Your Weird Sex Habits And Toilet Time 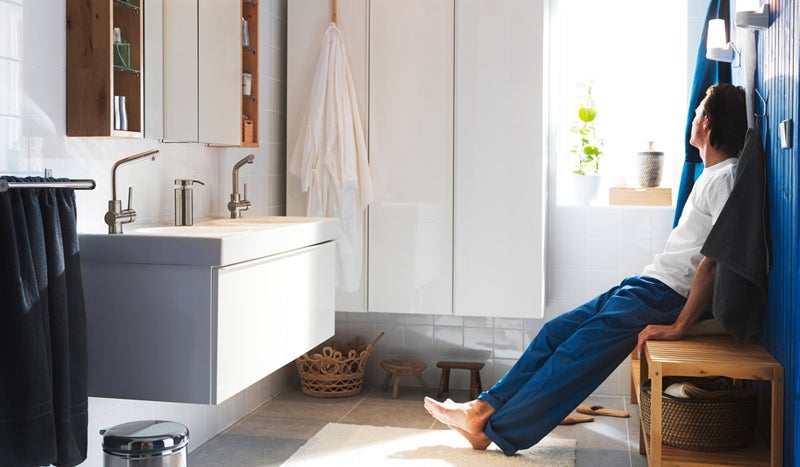 In a way, what you do in the privacy of your own home is literally IKEA's business. So it's no surprise that the Swedish company spends a lot of time and money studying how people live. What is surprising though is what its latest study found out, including the fact that you're not the only one who reads their phone on the toilet.

Life at Home, a new study of eight major cities around the world, polled more than 1000 citizens of each city to find out exactly what goes on behind closed doors. The full report is funny, fascinating, and oddly reassuring in its weirdness. But at more than 70 pages, it's a long read. Here are some highlights.

New Yorkers Work All the Time, Even When We're Pooping

Oh, New Yorkers. We're a mess. The stats aren't good: A third of us wake up stressed. We're less confident about how we look. Half of us wish we were having morning sex, but only nine per cent of us do. Most of us are glued to our phones in bed. We eat breakfast less than other cities. And when we do, we wolf it down in less than five minutes, because we're slobs and we're in a hurry.

Perhaps the most damning number: 17 per cent of us start our days by working while we're on the toilet, as Co.Design notes. While we admire Ikea for going there, as one of our colleagues commented, we think this is one gross case of underreporting.

You and I might think of Parisians as beautiful ingenues who do whatever they want, but life in Paris sounds pretty damn stressful. It's second only to Moscow in terms of how much stress its citizens feel about how they look, and Parisians were the least confident about their appearances than any other city.

Actually, Mumbai loves the morning in general. IKEA reports that Mumbaikars wake up the happiest out of any other city, with a huge percentage waking up "calm and peaceful". Mumbai is also second only to Shanghai when it comes to eating breakfast. They need the fuel: 13 per cent say they have morning sex, which also tops any of the other cities IKEA looked at. Great work, Mumbai!

Life In Berlin Is Chill As Hell

Ah, Berlin, a city that's so cool it's already over. 40 per cent of all Berliners find morning stressful, and 42 per cent of them consider themselves evening people. No surprise there, according to Ikea, given "the metropole's prominent nightlife". 55 per cent of those aforementioned evening people snoozing at least once, and 36 per cent snoozing more than once.

Berliners are also more relaxed about how they look: Only 13 per cent feel nervous about their appearance when they leave home. Compare that to uptight Moscow, where 20 per cent worry about it.

Londoners Pray In the Morning But Wish They Were Having Sex

This is correlation not causation, but nonetheless. IKEA reports that 14 per cent of all Londoners pray at least once a week on weekday. Meanwhile, only 8 per cent have morning sex, but almost half of Londoners think it's important. "59 per cent find cuddling in bed with their loved one important for their wellbeing, but far less do," the report adds, somewhat sadly.

Shanghai: Not Big on Hugging

Sweetly, IKEA spends a lot of time in its report talking about cuddling and sex — and the chemical benefits of both. Shanghai stands out at a city that's none to fond of either in the morning. Only 15 per cent of older Shanghai citizens show physical affection in the morning, but the younger generation cuddles a bit more, at 26 per cent. According to IKEA, that's a sign of a cultural shift in China: "A recent report by the New York Times claims that 'hugs are on the rise in China,' due to 'exposure to the West, especially huggy North America.'"

The ladies of Moscow seem to deal with a whole lot of stress in the mornings: 40 per cent of Moscow's women feel that the morning is the most stressful time of day. IKEA says that the gender gap is larger here than in any other city: Half of women make breakfast for others, while only one fifth of men do. Ladies feel three times as much stress about how they look than the men too. Maybe it has to do with their caffeine levels: 88 say that coffee or tea is "important to their personal wellbeing."

"Swedes may have quite an active and liberal reputation stemming from the seventies," says IKEA, which sounds like it knows. But it turns out that Stockholm has less weekday sex than any other city involved — except for Shanghai, and we know how they feel about touching.

At this point, IKEA lets itself editorialise a little bit with a call to action: "So let more cuddling begin!" Check out the full PDF report here, and share any nuggets we missed in the comments below!