How WWI Bombs Shattered Bedrock And Changed The Geology Of France

Every once in a while, we're reminded of World War I's awful legacy: Trenches that run like gashes through the French countryside, craters in farmland, the iron harvest. These scars are even deeper than we might imagine. Bombs actually shattered bedrock and created the bizarre, dimpled landscape of modern day Verdun.

World War I has gone down in history as our first modern war, when we became brutally efficient at killing people. As bombs rained down on the Western Front, thousands of craters opened up on the battlefields. Meteorites had created the occasional crater before, but large-scale bombing was a new phenomenon on earth, which two geographers have called "bombturbation."

A post by David Bressan on his History of Geology blog pointed me toward the geographer's 2006 paper where they first discuss bombturbation. "The artillery fire changed how and which type of soil can form — so much that the authors suggest that the modern use of bombs and explosives is a significant erosion factor that it deserves a own term," writes Bressan.

The geographers Joseph P. Hupy and Randall J. Schaetzl had visited Verdun in France, home to one of the World War I's deadliest and most infamous battles. They marked off two plots of land, a quarter hectacre each, and measured depth and soil disturbance of every crater in those plots.

Artillery shells could blast craters up to 30 feet wide and many feet deep. Land mines were even more powerful, creating holes up to 160 feet deep. These explosives blasted through bedrock. Though curiously, artillery shells did more damage to the ground in WWI than WWII in the same area. That's because early artillery shells were designed to explode on impact, but more advanced detonators during WWII allowed shells to explode in the air.

Because of Verdun's high water table, some of these craters later filled up with water like small ponds. In dry craters, rotting matter and microbes have accumulated on the exposed limestone bedrock, making it more prone to weathering and erosion. The soil in these craters is thicker than in undisturbed areas. 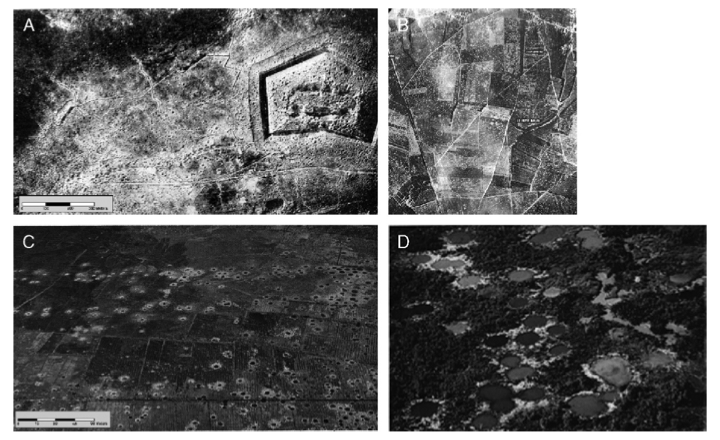 Aerial images of Verdun in A and B. Craters in Vietnam in C and D. Soil Science

Verdun is an early example of bombturbation, but weapons have only gotten more powerful since then. Vietnam has suffered the worst of it. The U.S. dropped some 14 million tons of bombs on the country during 8 years of war. As destruction of enemy habitat became an explicit part of American strategy, "aerial bombardment inﬂicted damage to the Vietnamese landscape at a scale never before accomplished," write Hupy and Schaetzl. We may not pause to think about the geological legacy of bombs in the thick of war, we have to live with it long after. [Scientific American, Soil Science]