How A 35cm Hole Created A 400m Deep Saltwater Lake 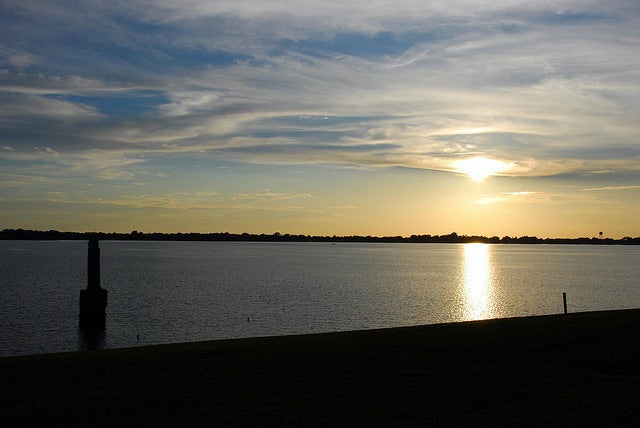 Lake Peigneur is located in Louisiana near the Gulf of Mexico. Before 1980, it was an approximately 10-foot (3m) deep fresh water lake with an island in the middle. Next to it, and partially under it, Diamond Crystal Salt Company maintained a salt mine, with salt being mined near the lake since 1919.

Around large underground salt domes, you can often find oil. As explained by one Dr. Whitney J. Autin, "…salt moves upwards and it pierces through surrounding strata… and this piercing produces faults and folds within the surrounding sediments producing an ideal mechanism to trap oil."

As such, Texaco was doing some drilling in the lake. On November 20, 1980, crews on the oil rig in the lake ran into a problem. At just over 1200 feet (365m), their drill seized up. Not a major problem normally, they worked to get it loose. In the process, they heard several loud pops then the oil rig tilted like it was going to collapse. The men got off the rig and to shore as quickly as possible. Not a moment too soon. Just 19 minutes after their drill had seized up, they watched from the shore as the huge platform (45m tall) overturn and sunk into the 3m deep lake…

Next, the astounded drillers watched as a whirlpool slowly formed, soon reaching a quarter mile wide and centered over the site of the oil drilling. Whoopsadoodle.

At the same time the oil workers were watching their $US5 million drilling rig disappear into the lake, workers in the salt mines below the lake noticed something was wrong as well; a stream of water was found flowing along the floor of the mine shaft at about the 396m level of the mine, which went down to about 457m at its deepest. As water wasn't supposed to be in the mine, the evacuation alarm was raised. Foreman Randy LaSalle then drove a cart around to the regions of the mine where the alarm signal could not be seen, making sure everyone knew about the evacuation. By the time those from the deepest areas of the mine made it to the elevator, they encountered knee-deep water. Despite the fact that the mine was rapidly filling with water and the exit elevator could only take up eight people at a time, all 55 miners were evacuated successfully.

It wasn't clear to the miners what had happened at the time, but from the evidence at hand, the theory is that the drilling crew miscalculated their location and instead of being several hundred feet from the salt mine, they had instead been directly over a portion of it and penetrated the salt dome. The initial hole resulting from this mistake was only 14 inches wide, but water spraying in at extremely high pressure quickly widened the hole. The water also dissolved the salt pillars that supported the ceiling of the mine, causing the shafts to collapse.

The widening of the hole and the collapse of the mine gave strength to the whirlpool on the surface of the lake, which caused major damage. Docks, another drilling platform, a 70 acre island in the middle of the lake, eleven barges, vehicles, trees and a parking lot near the lake were all sucked into the mine below. The pull of the whirlpool was so strong that it reversed the flow of the 19km long Delcambre Canal that drained the lake into the Gulf of Mexico.

Three hours after the first signs of trouble, the three to four billion gallons of water that had made up the lake were almost all gone, having dropped into the mine below, leaving a gaping crater. The backward-flowing canal formed a 48m waterfall that gradually refilled the lake, this time with salt water from the Gulf.

The 3m deep freshwater lake was now a saltwater one, approximately 400m deep in a good sized portion of it.

Amazingly, there were no deaths or serious human injuries as a result of the disaster, though the ecosystem of the lake was forever changed. Further, three dogs died in the event. Many lawsuits were filed, all settled out-of-court, costing Texaco about $US45 million in damages, with about $US32 million of that going to Diamond Crystal.