When luggage makes its merry way through the airport, bomb-sniffing scanners have to check it out for explosives. Now, scientists in Israel say they have developed a small electronic chip that could be a million times more sensitive than our bulky scanners.

To detect explosives, airport security and the military usually rely on machines that use ion mobility spectrometry, a technique that identifies molecules by how fast they move through an electric field. That can detect traces of explosives at concentrations of, according to one report, parts per billion. This new chip works at parts per quadrillion (which is a million times better if all these -illions are blurring together).

This small chip is inspired by how our own olfactory systems work. We have a finite number of smell receptors in our noses but can distinguish between a seemingly infinite number of smells based on how different receptors differentially bind the molecule. Likewise, the chip has eight different nano-sized chemical receptors. Depending on how molecules bind each of these eight receptors, the chip can tell whether they're innocent or indicative of a bomb. 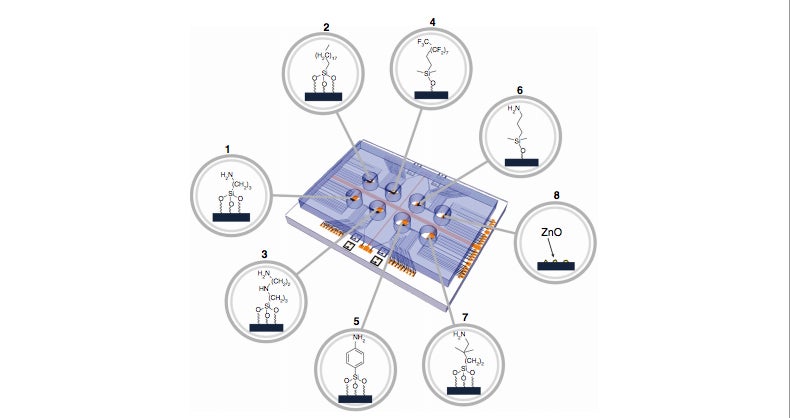 The chip even worked in areas heavily contaminated with cigarette smoke and up to five meters, or 16 feet, from the source of explosives. It could also detect peroxide-based bombs, which are common in improvised explosive devices because they're easy to make out of drain cleaner, bleach and acetone.

But all of this is pretty basic research, so don't expect this chip to be sniffing your luggage anytime soon. The supersensitivity, for example, raises some questions about its implementation. If it's so sensitive, will you be detecting trace amounts on innocent people? Such issues would be worked out, we hope, since the last thing we need is airport security that causes more trouble than it's worth *cough cough*. [Nature Communications via PhysOrg]