This week interception of Russian warplanes by NATO Typhoon fighters reminds me of the time in which the world was on the brink of total nuclear annihilation, when Soviet forces taunted the Americans to test their defenses. This image collection shows that part of a Cold War that seems reactivated right now. 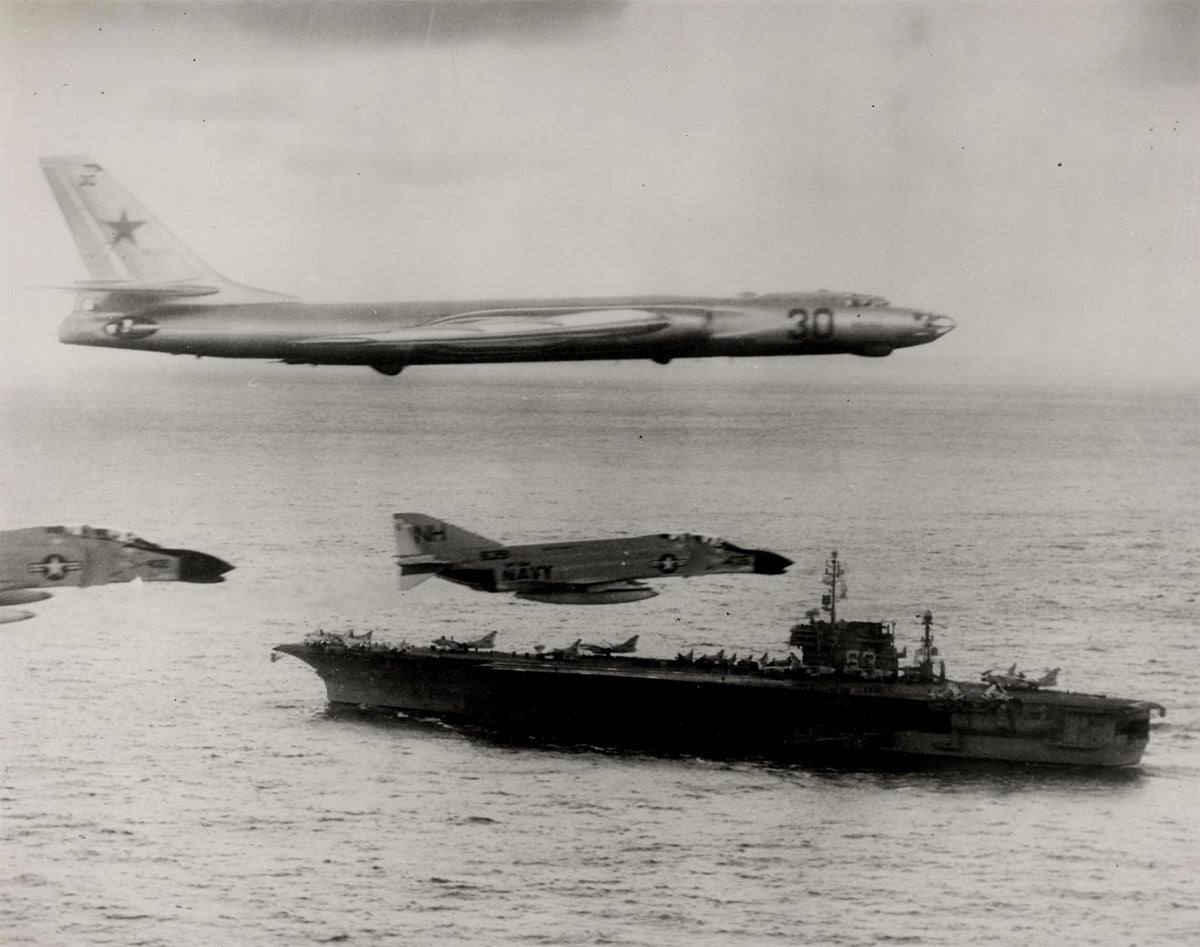 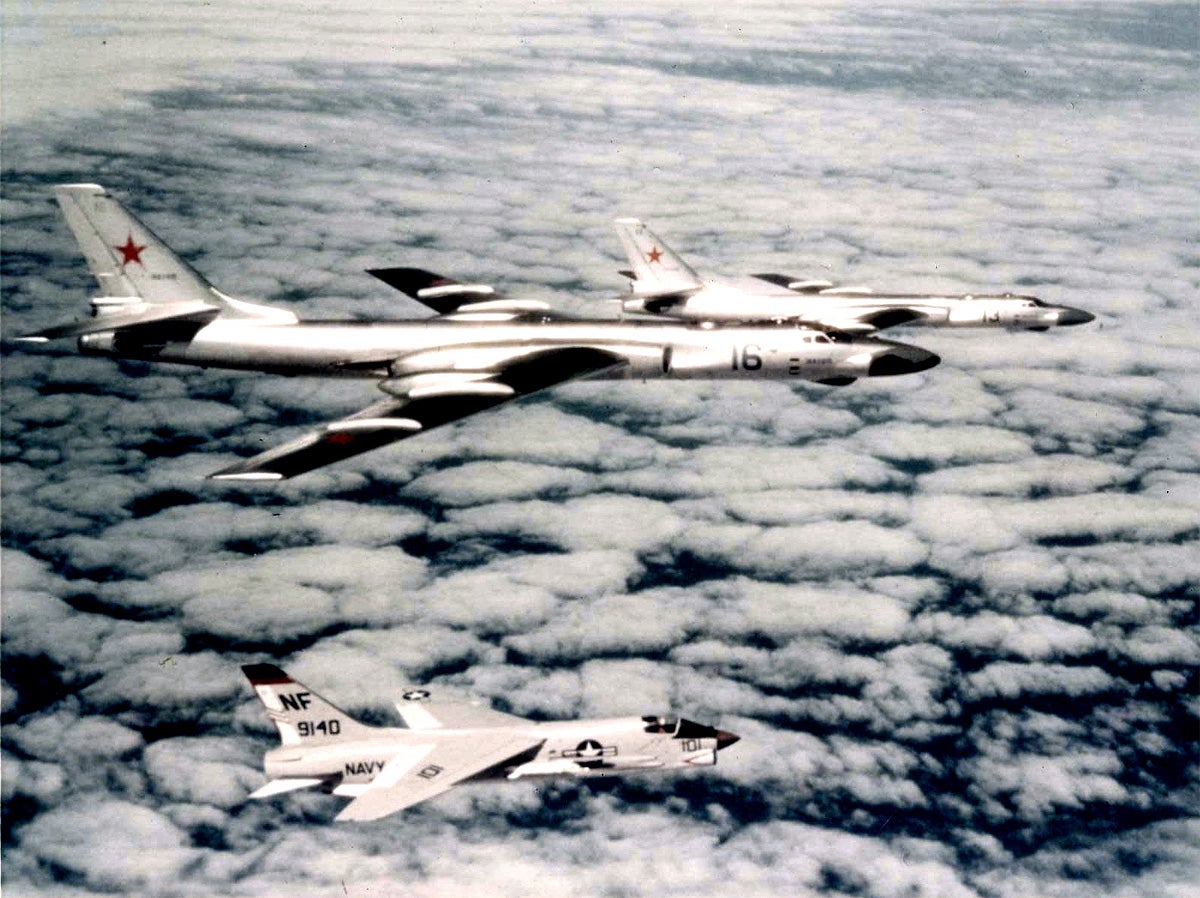 A Convair F-102A intercepting a Soviet "Bear" long-range bomber off the coast of Iceland in July 1970. 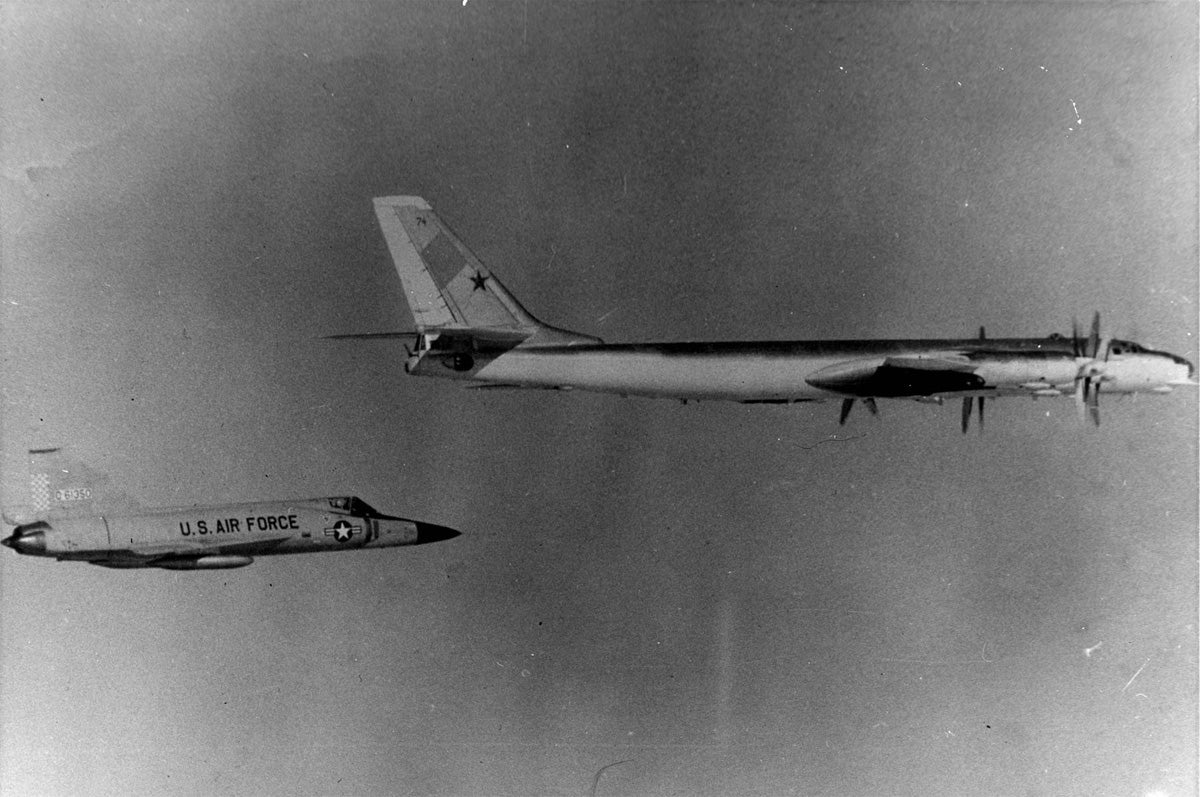 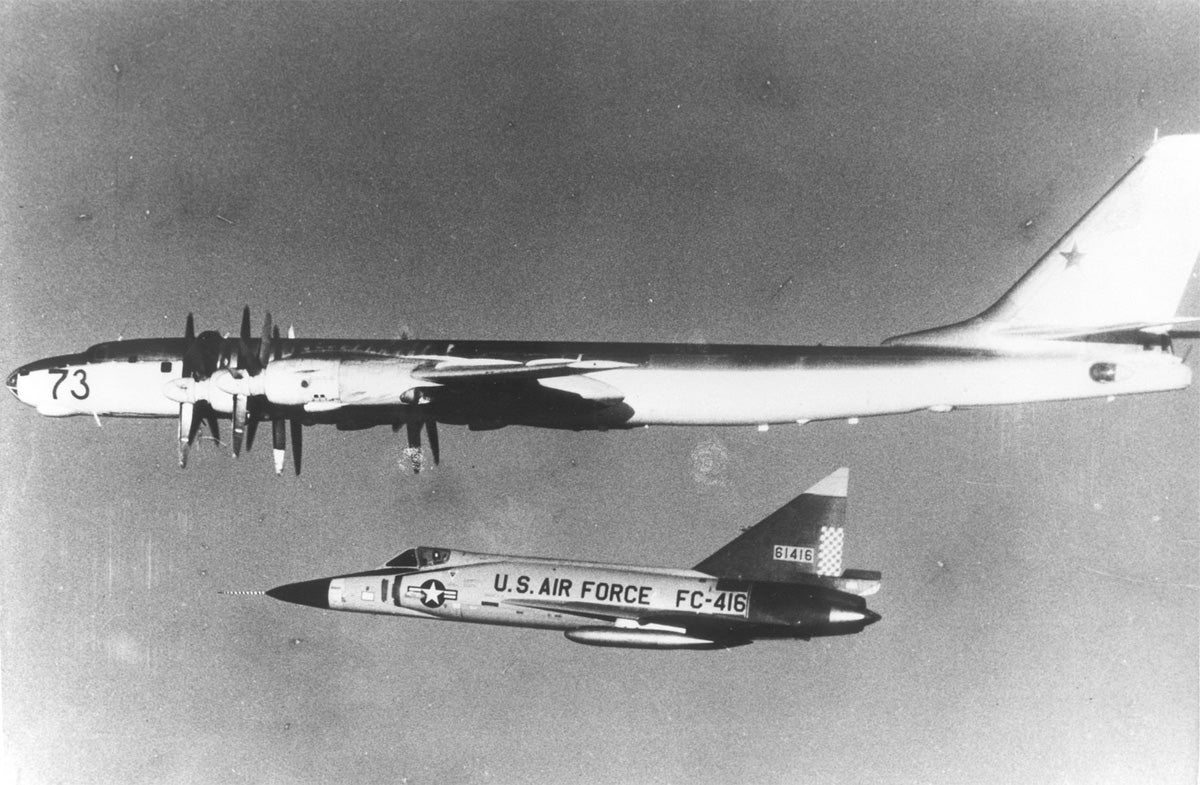 1971: A US Navy McDonnell F-4B-27-MC Phantom of Fighter Squadron VF-161 "Chargers" intercepting a Soviet Tupolev Tu-95MR over the Sea of Japan. 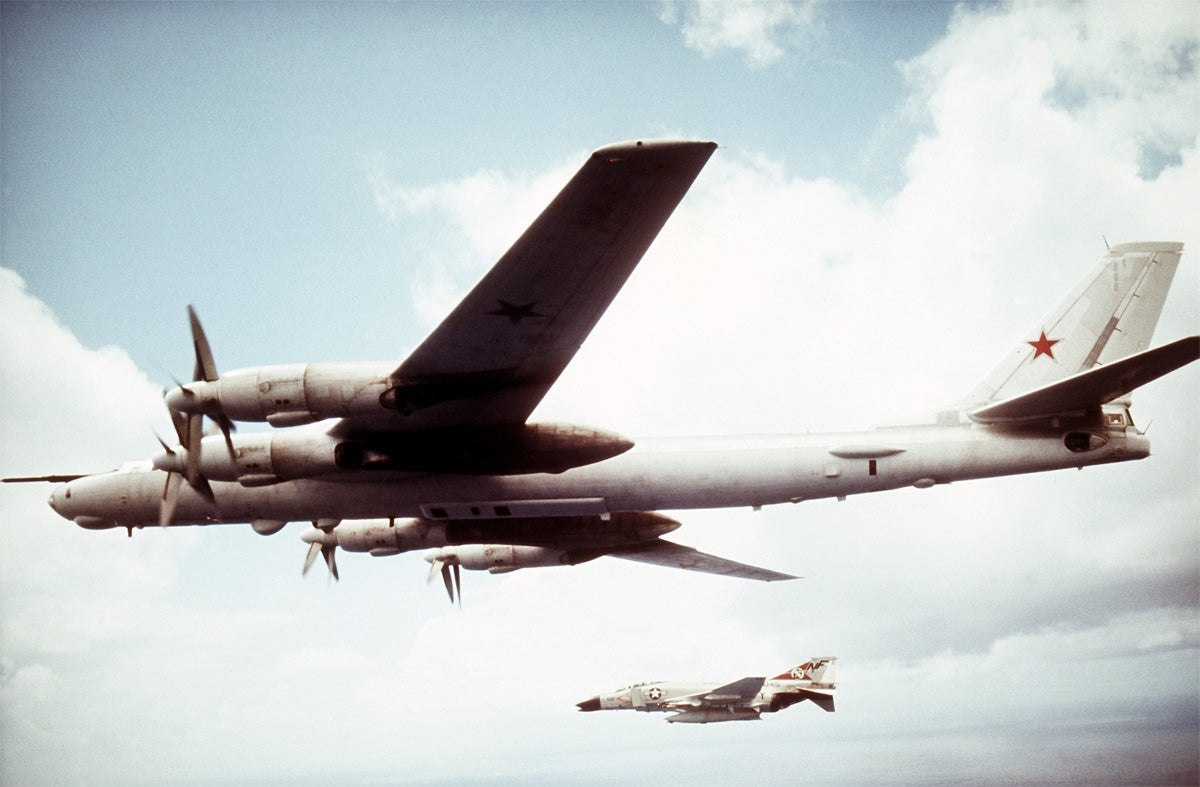 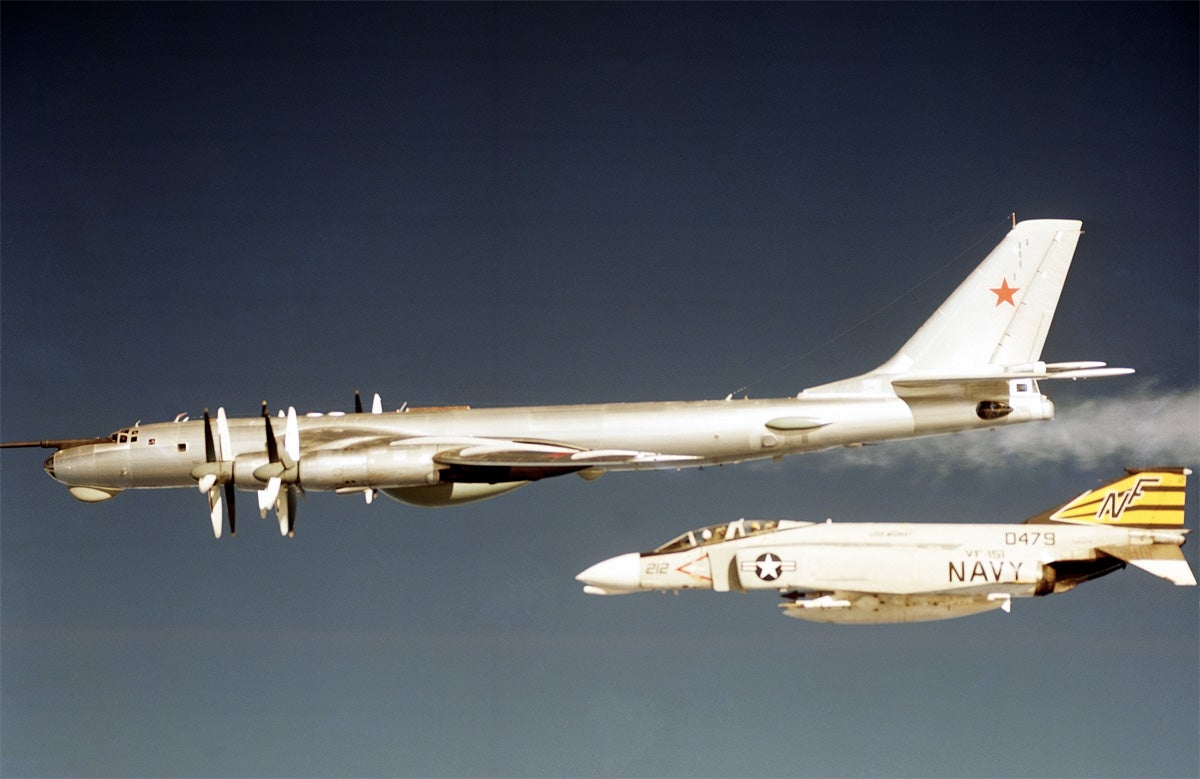 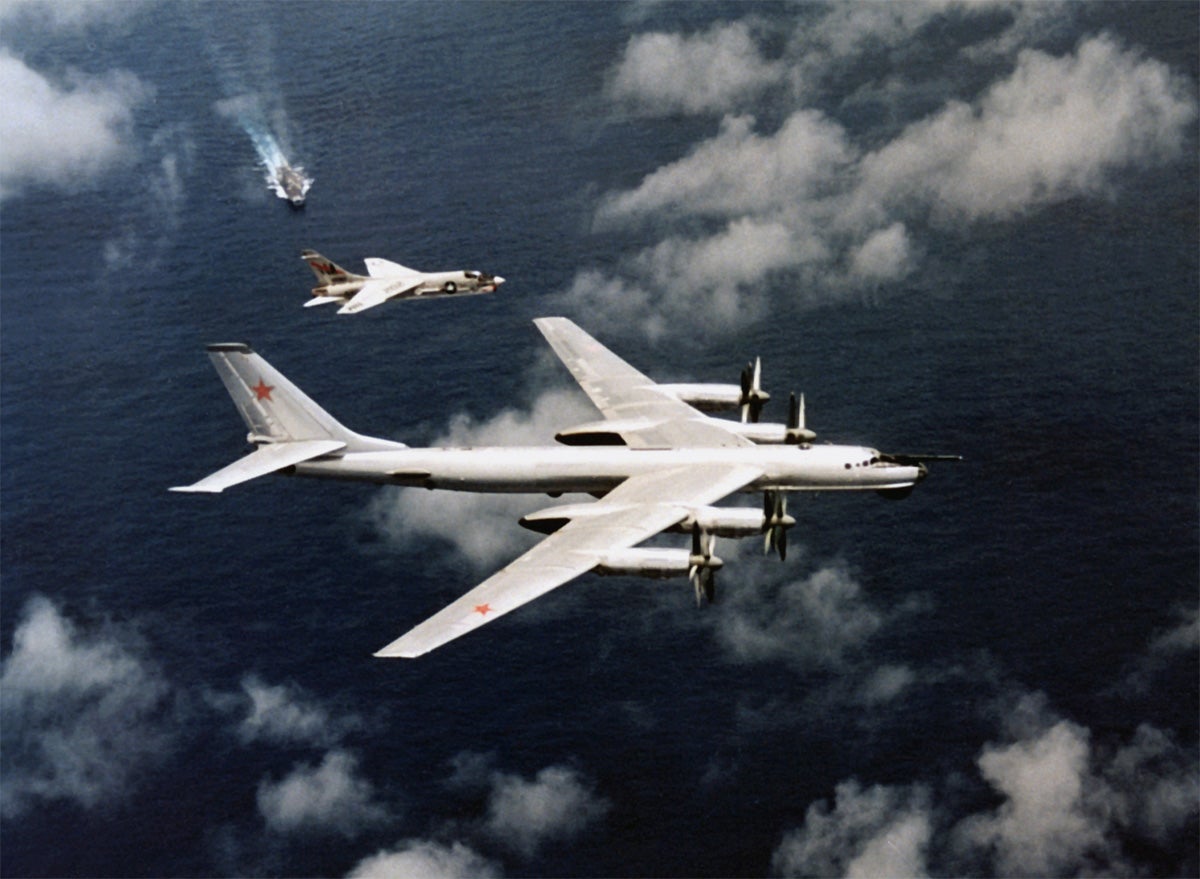 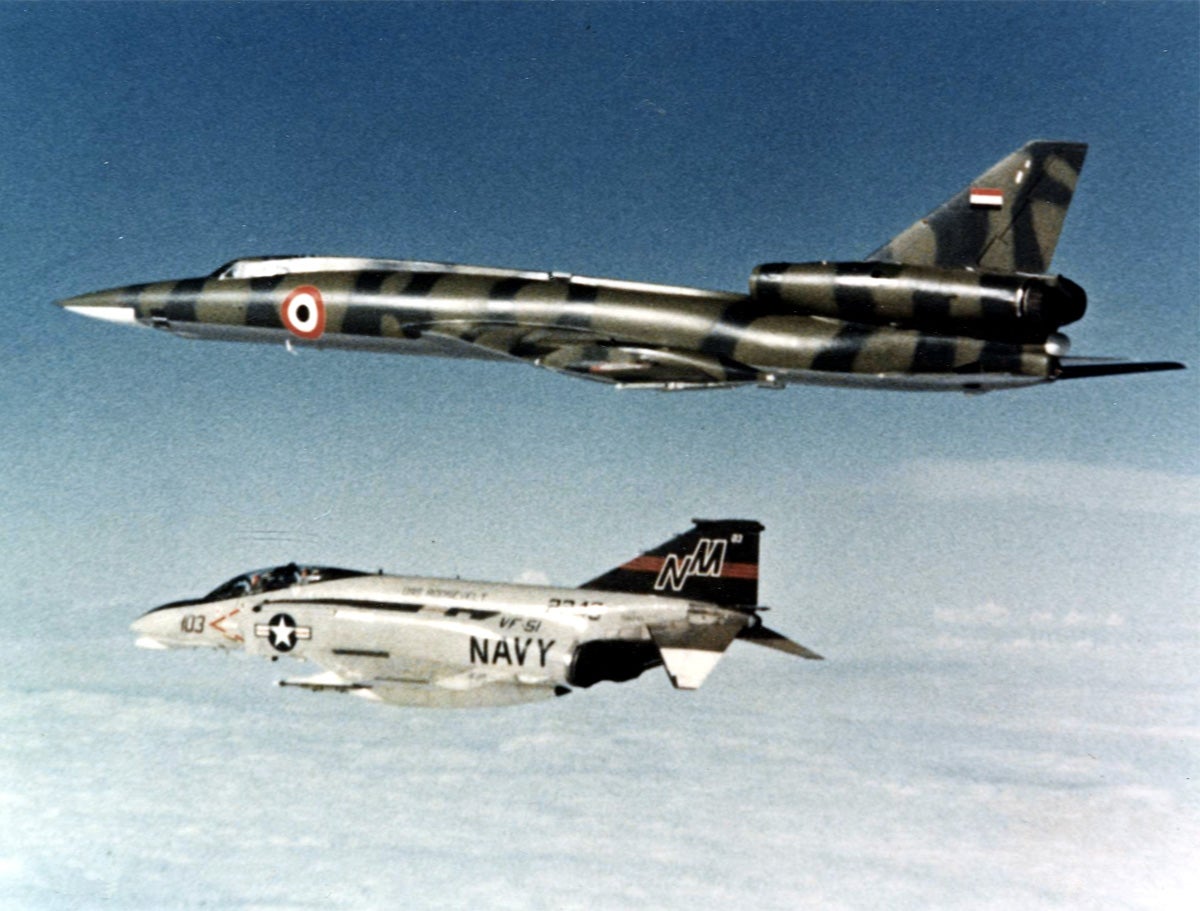 A US Navy Grumman F-14A Tomcat from Fighter Squadron VF-14 Top Hatters intercepts a Soviet Tupolev Tu-95RTs over the Mediterranean Sea on 15 February 1977. 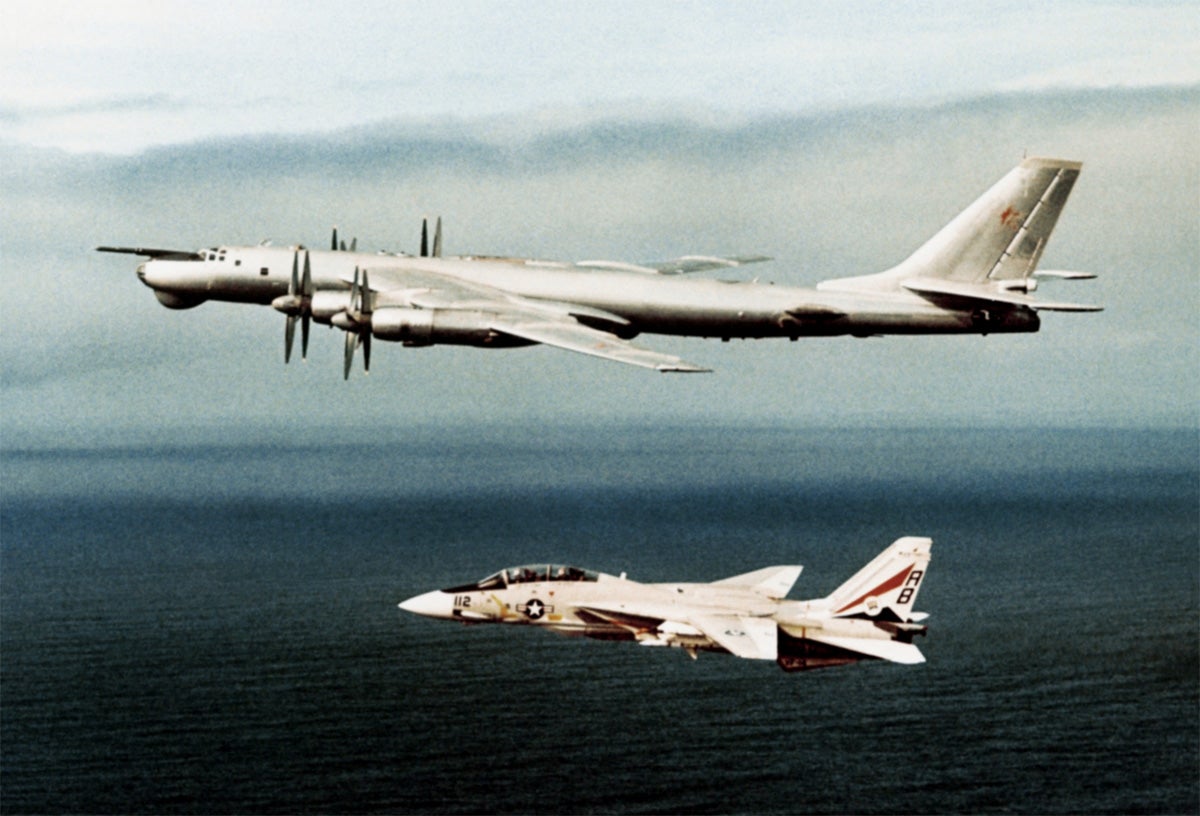 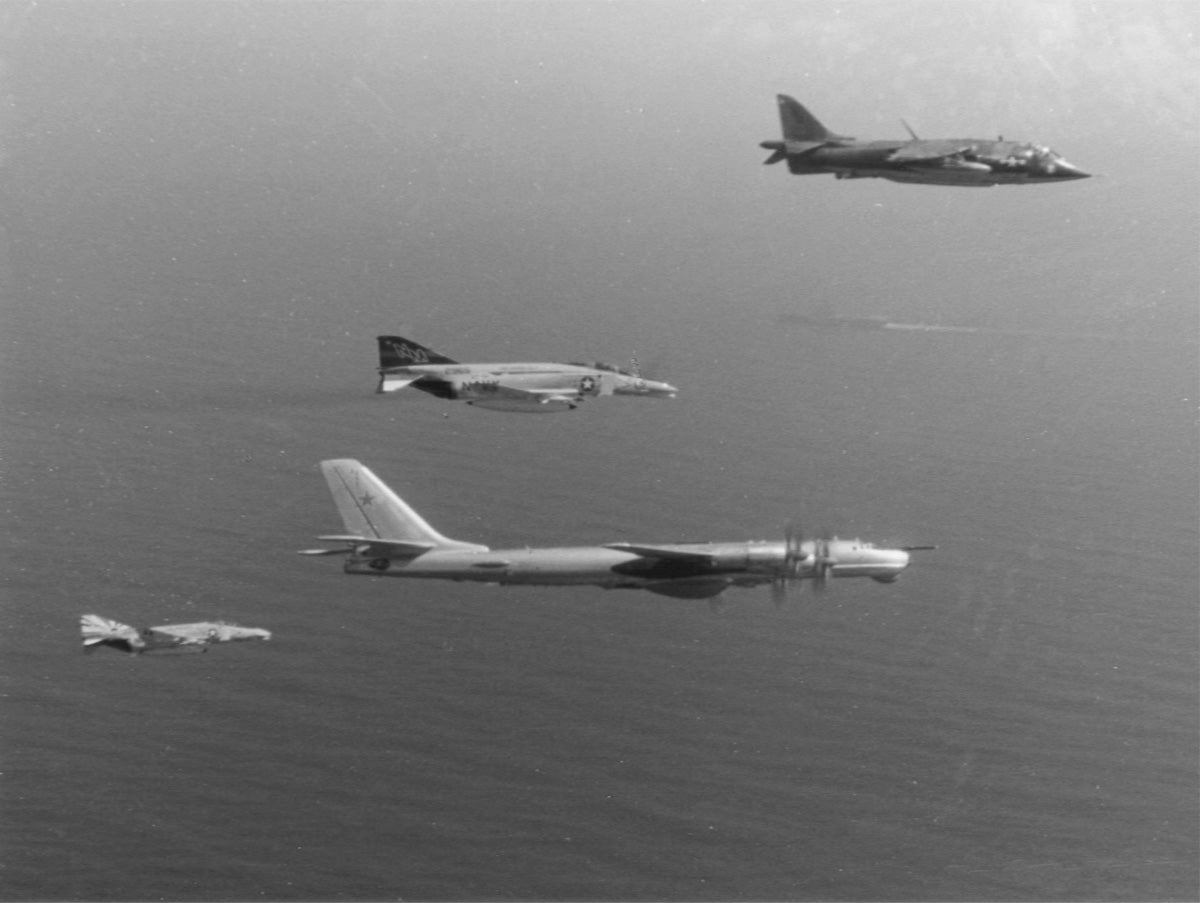 An A-7E Corsair II of Attack Squadron (VA) 27 intercepts a Soviet Il-38 patrol aircraft that was flying in the vicinity of the carrier Coral Sea (CV 43) steaming in the North Arabian Sea, circa 1979. 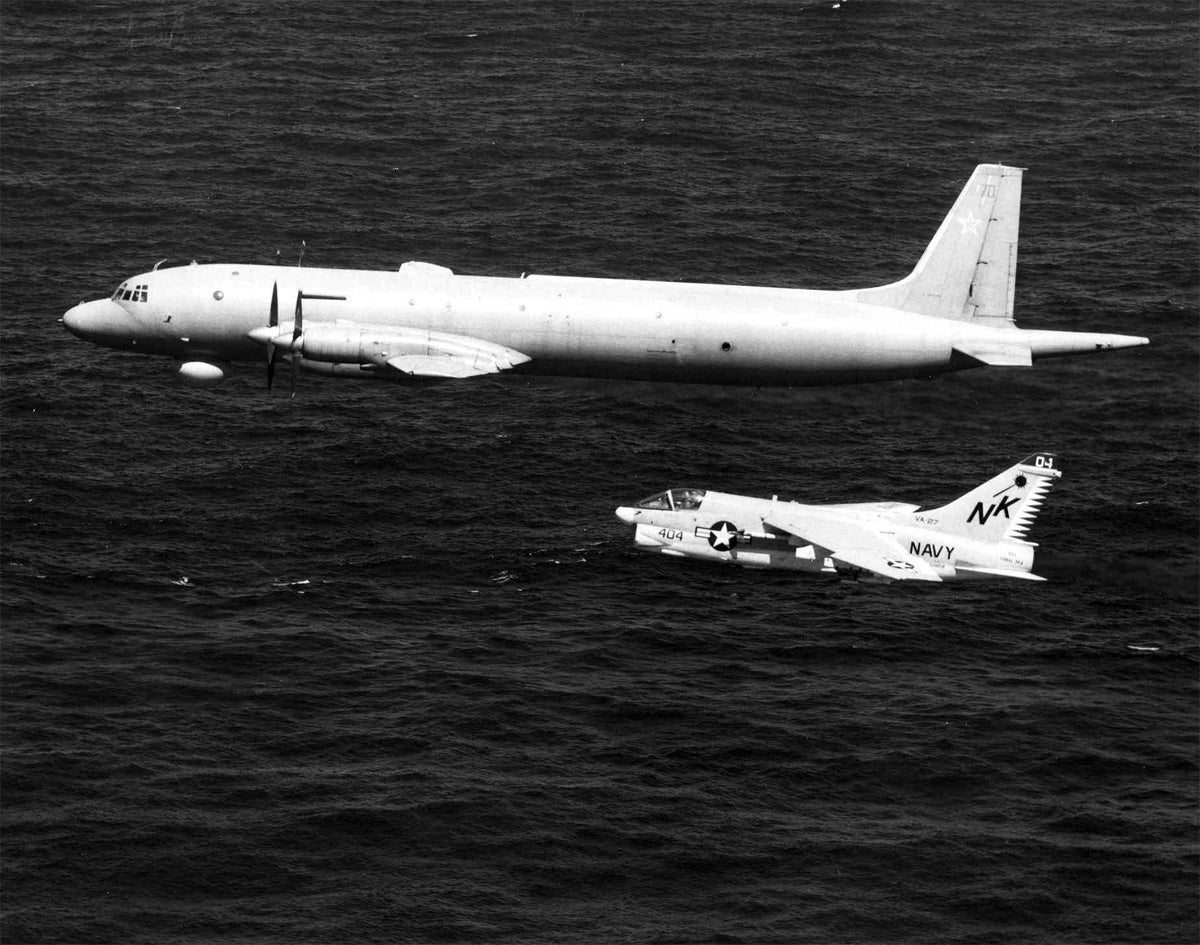 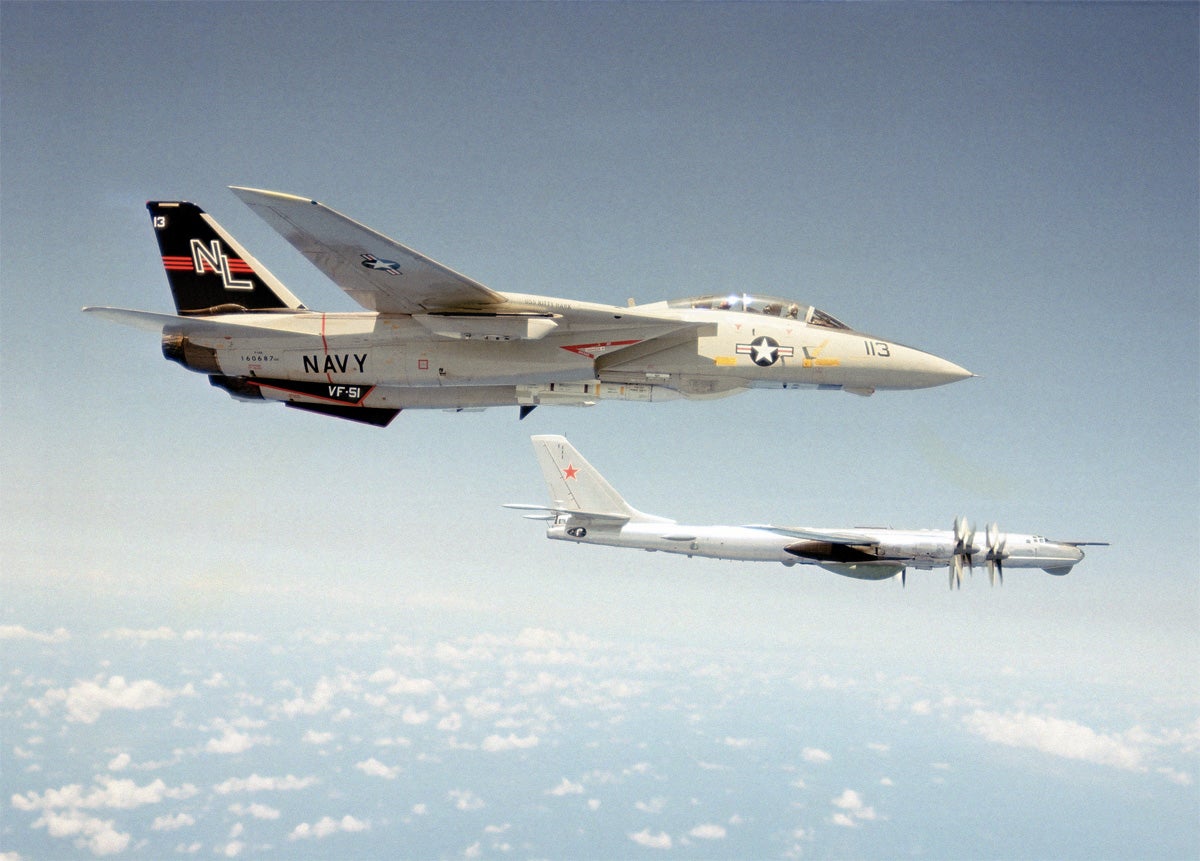 An F-106 Convair aircraft belonging to the 102nd Fighter Interceptor Wing of the Massachusetts Air National Guard, intercepting a Soviet Tu-95 Bear bomber aircraft off the coast of Yarmouth, Nova Scotia in 1982. 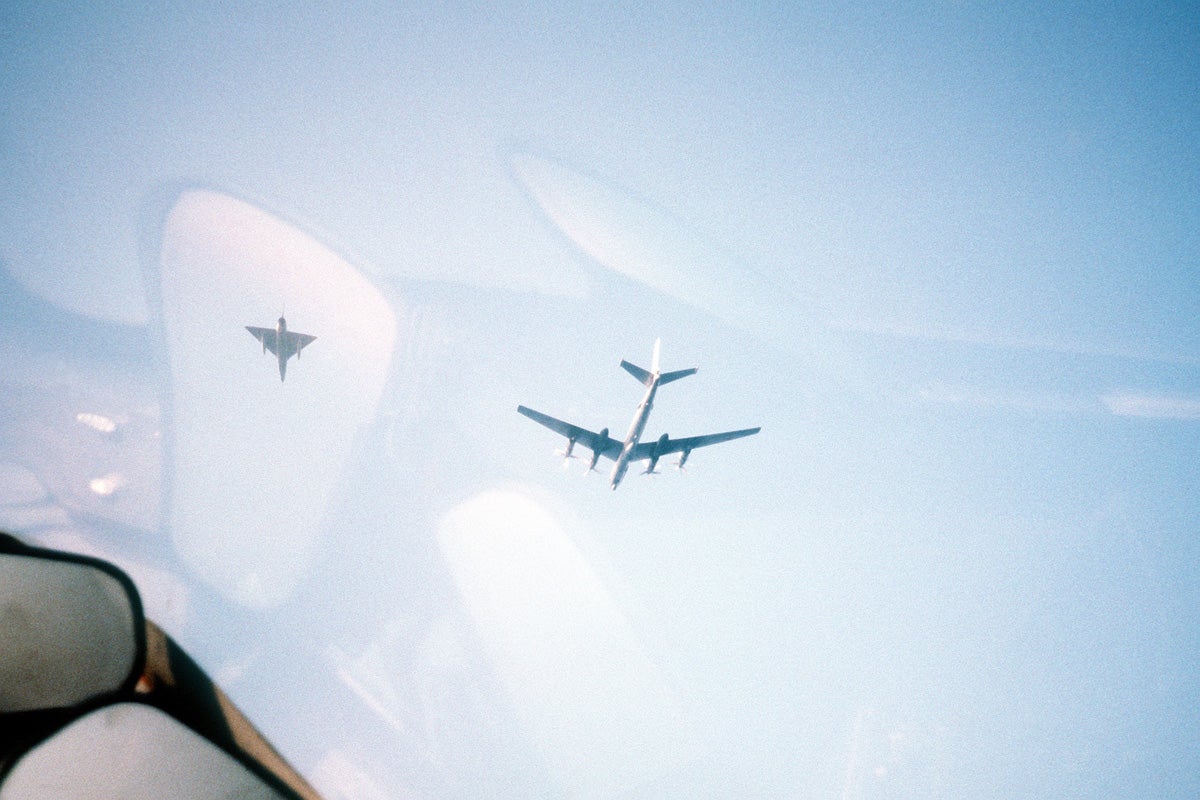 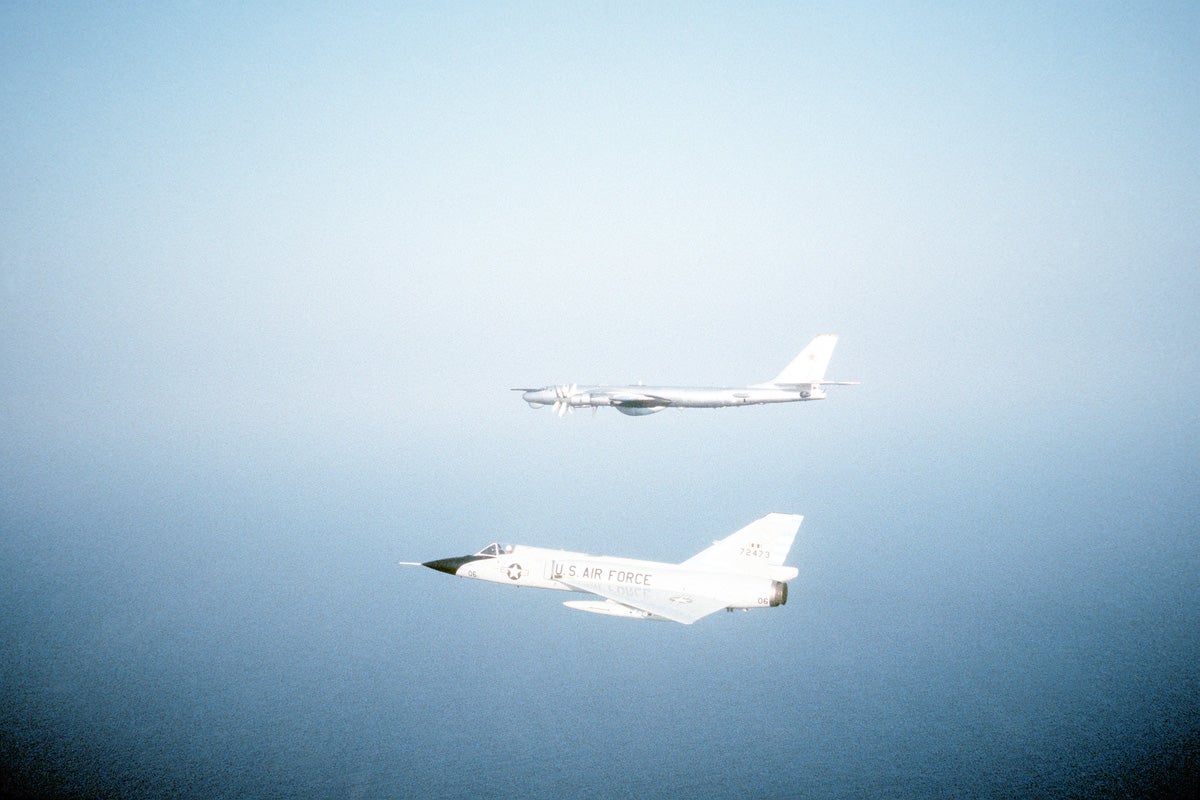 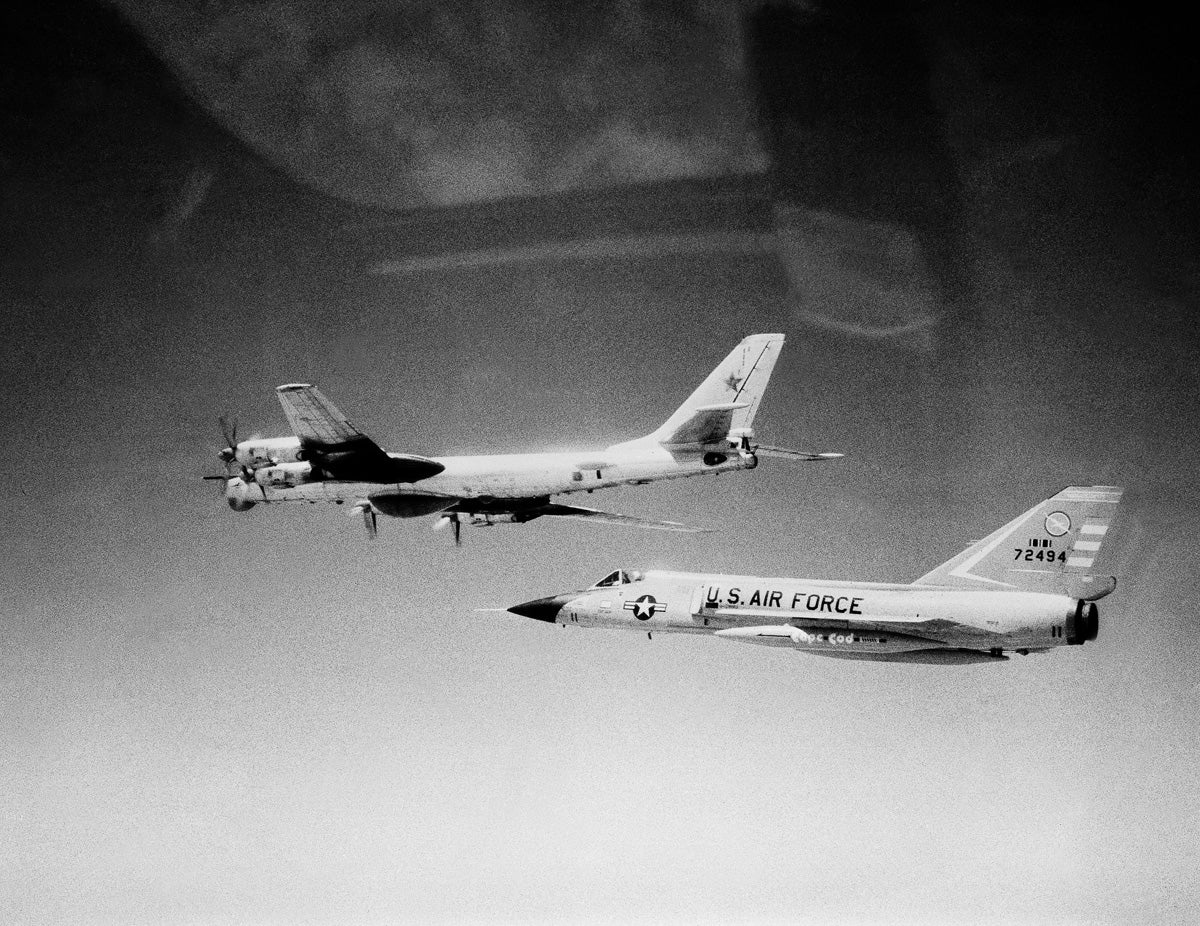 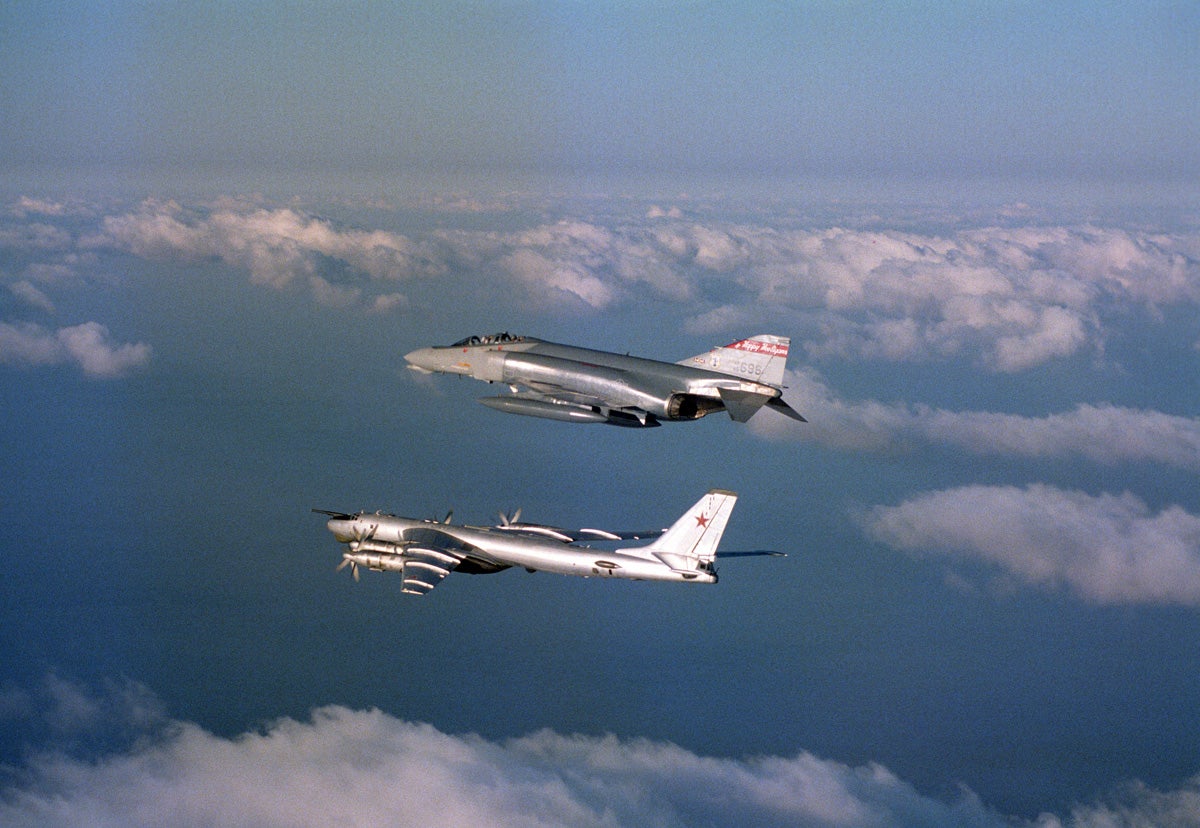 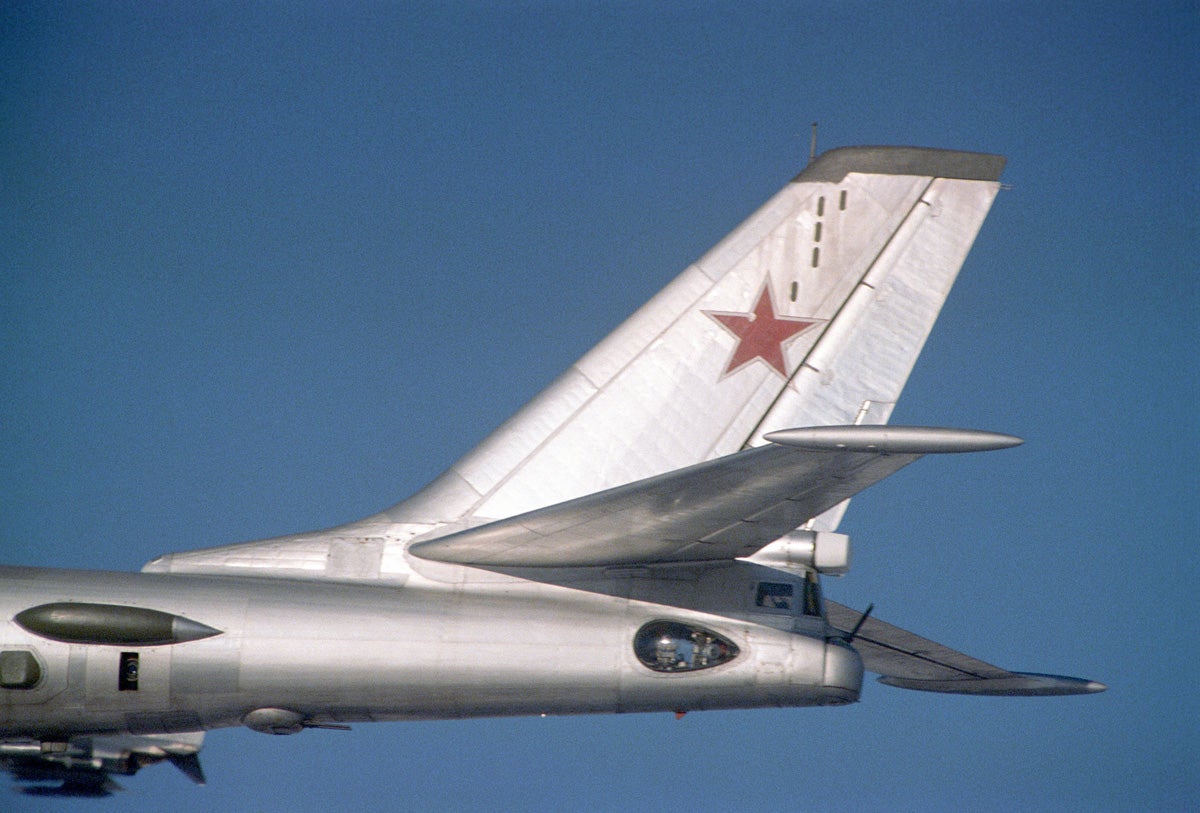 A Tu-95 Bear D aircraft being intercepted by an US Navy Grumman F-14A Tomcat from fighter squadron VF-11 Red Rippers, on 1 October 1985. 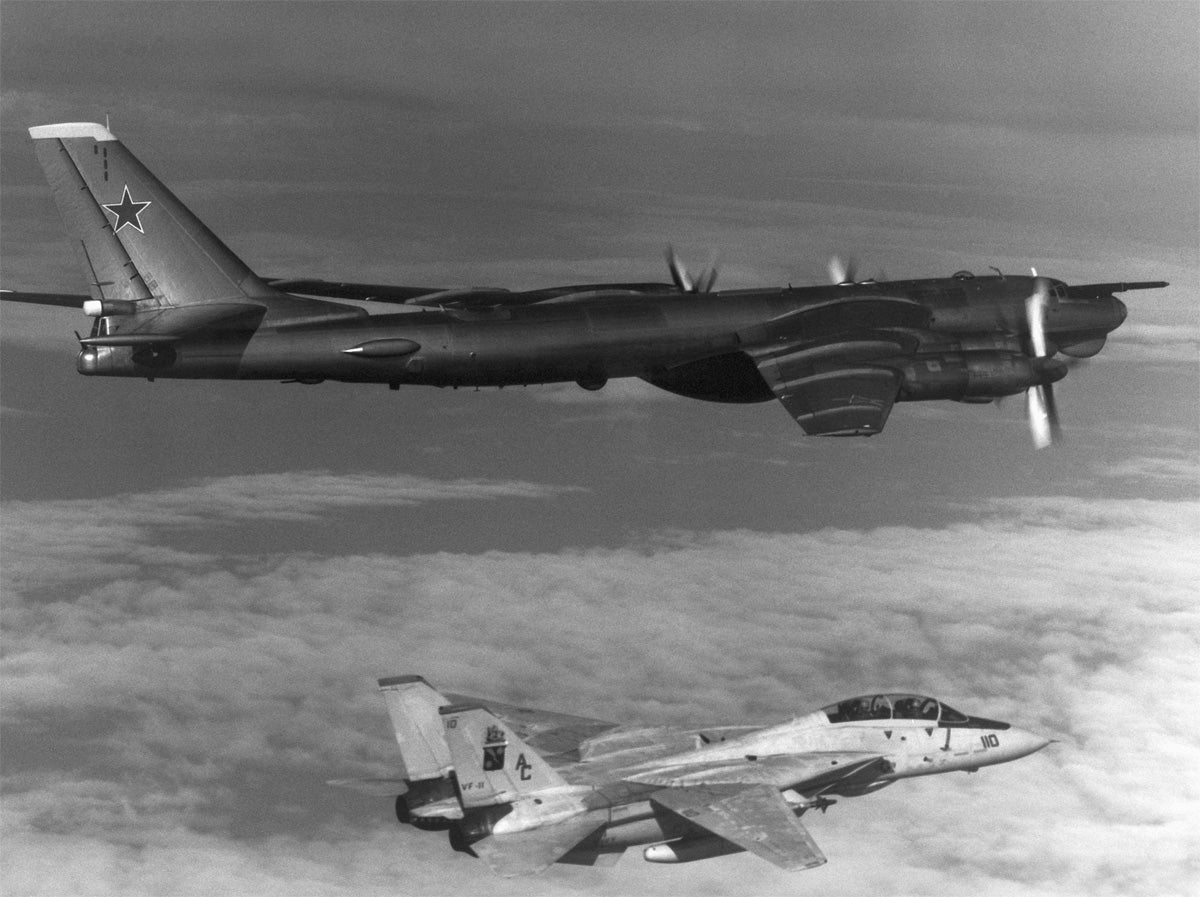 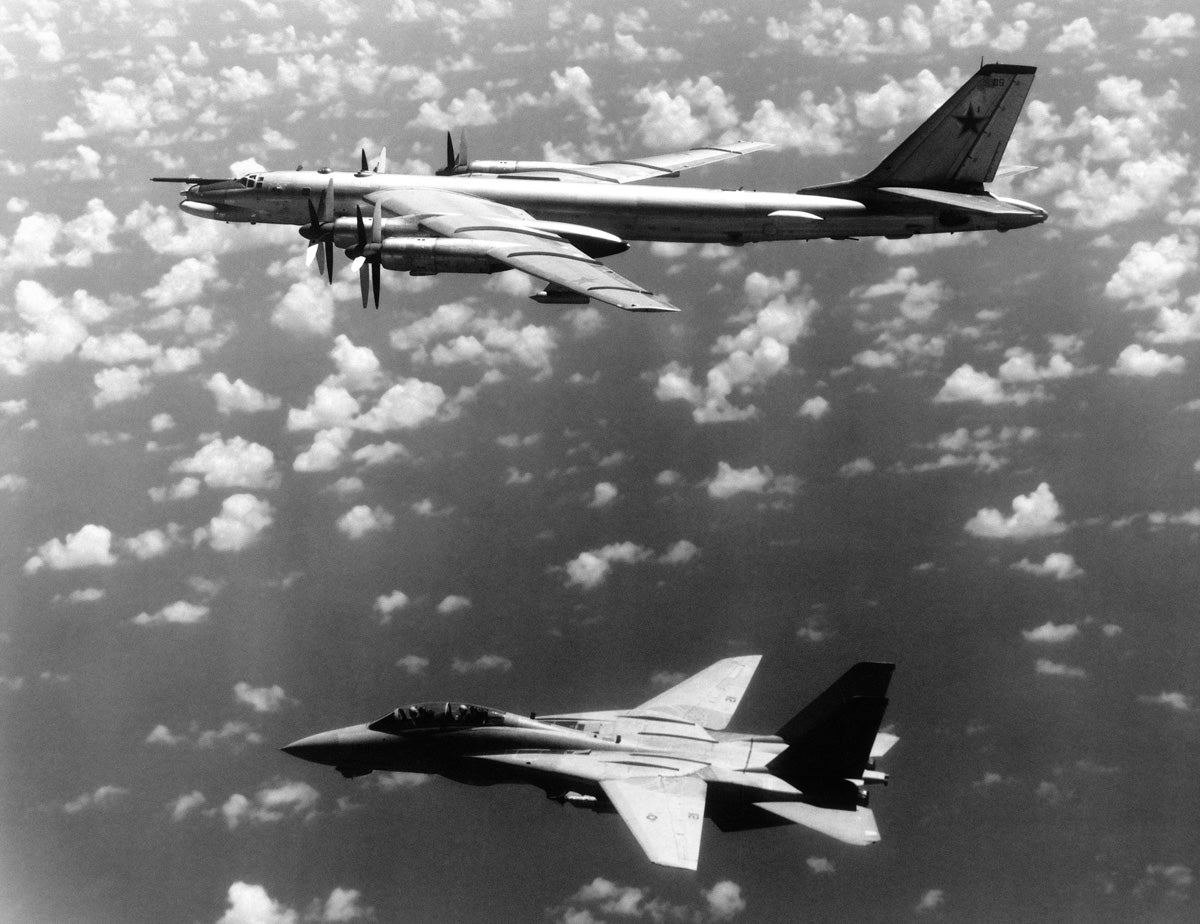 An US Air Force McDonnell Douglas F-15C Eagle from the 57th Fighter Interceptor Squadron, based at Keflavik Air Base, Iceland, intercepts a Soviet Tupolev Tu-95 Bear D aircraft in 1987. 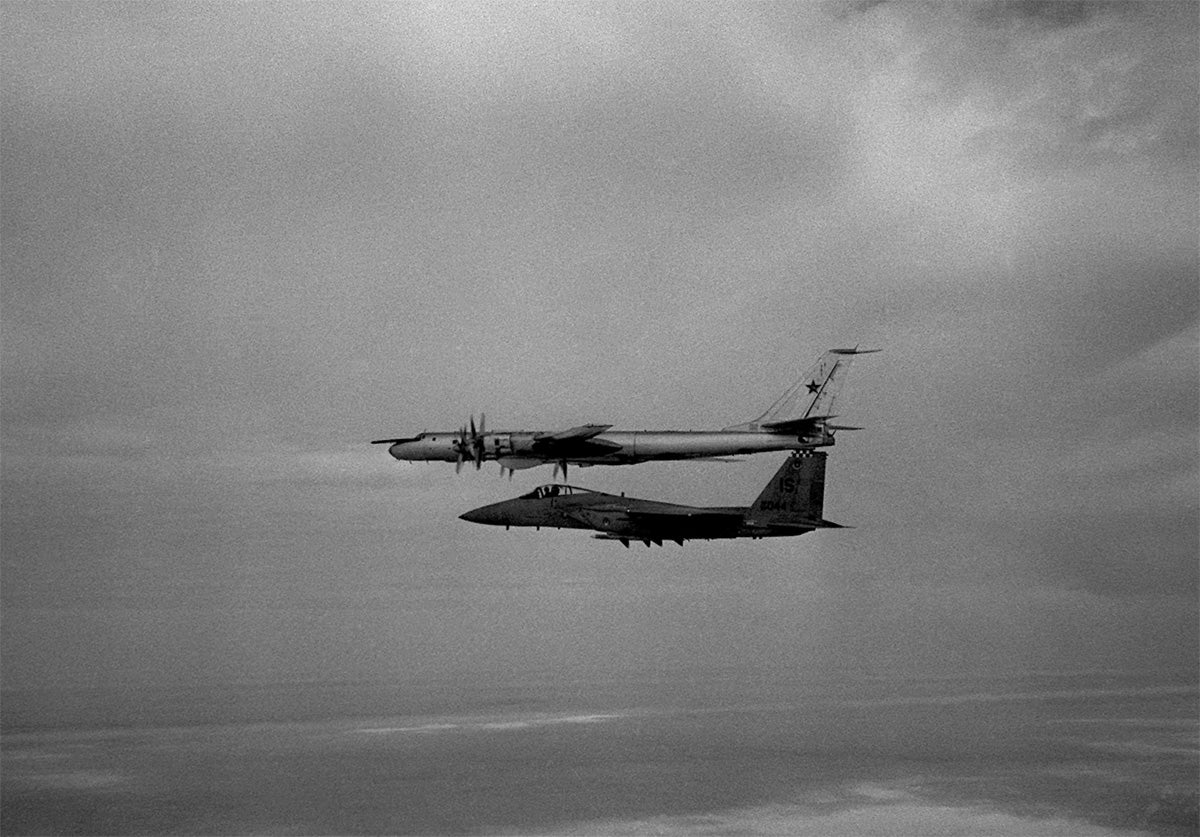 A Soviet TU-95 Bear-H aircraft being escorted by a US Navy F-14A Tomcat aircraft, and a US Air Force F-15 Eagle aircraft after it was intercepted approximately 350 nautical miles southwest of Adak, Alaska on 29 May 1987. 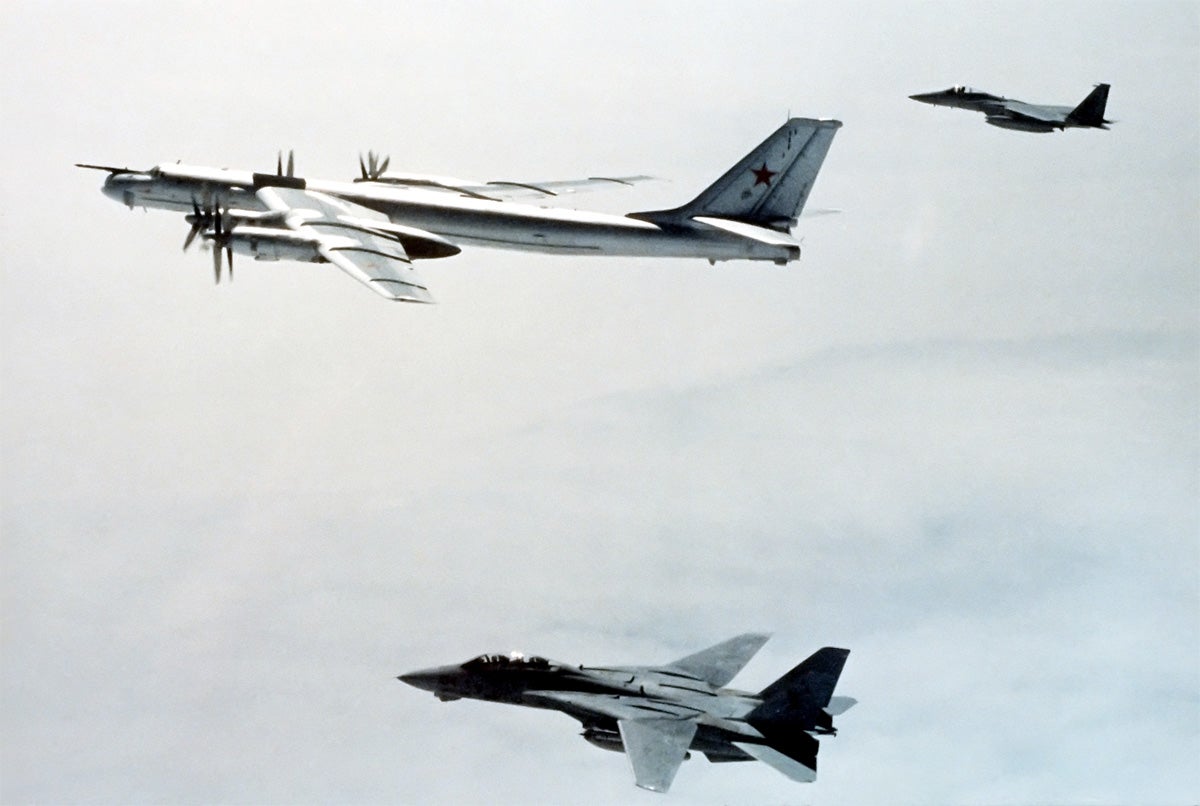 Two Soviet MiG-29 aircraft en route to an air show in British Columbia, Canada, are intercepted by F-15 Eagle aircraft of the 21st Tactical Fighter Wing. The Soviet MiG-29s are, for the first time, travelling to the Abbotsford International Airshow in Abbotsford, BC, Canada, to participate in the August 1989 airshow. 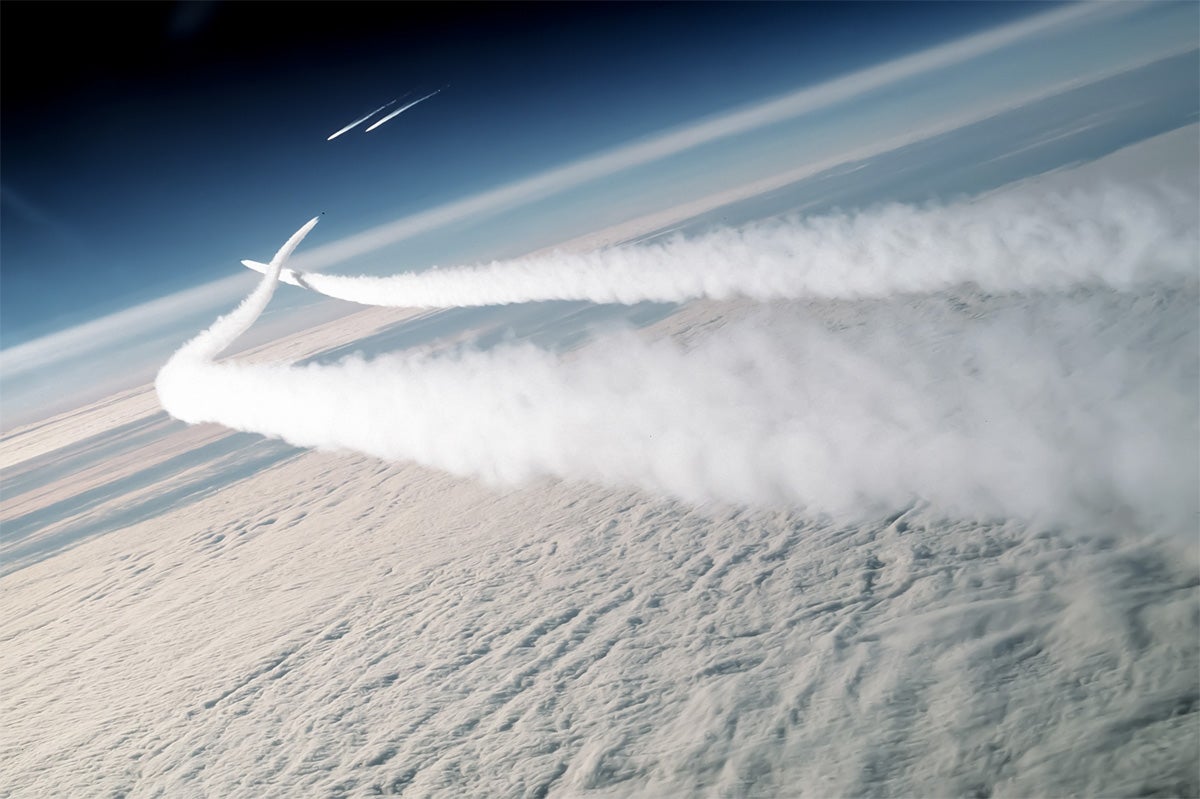 May 1996: An F-14 Tomcat escorts a Soviet bomber as it passes over the carrier Constellation (CV 64). 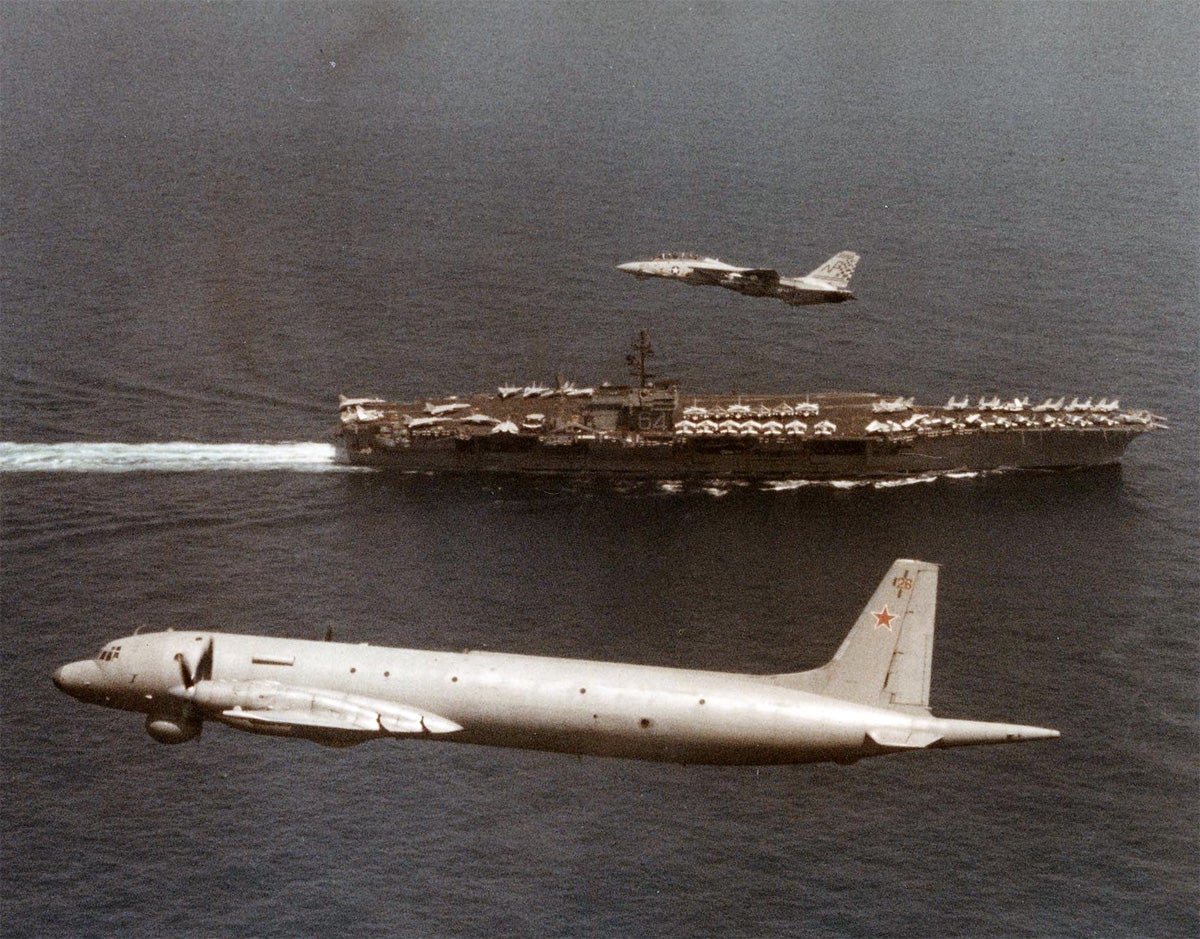 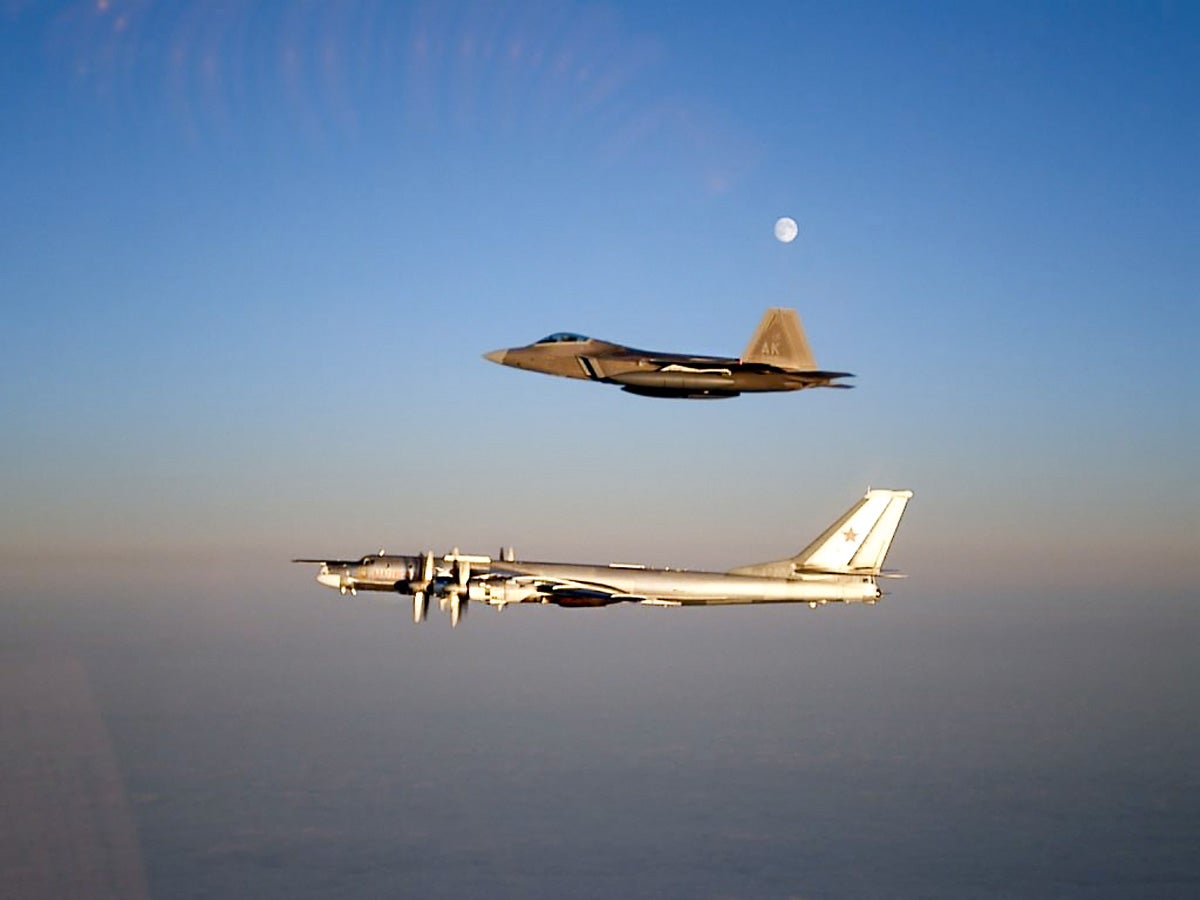 An F/A-18 Hornet aircraft from Carrier Air Wing One One embarked aboard the aircraft carrier USS Nimitz (CVN 68) escorts a Russian Tu-95 Bear long rang bomber aircraft south of Japan Feb. 9, 2008. The bomber neared the vicinity of the carrier resulting in the fighter intercept. Nimitz was transiting through the Western Pacific on a regularly scheduled deployment when the incident occurred. 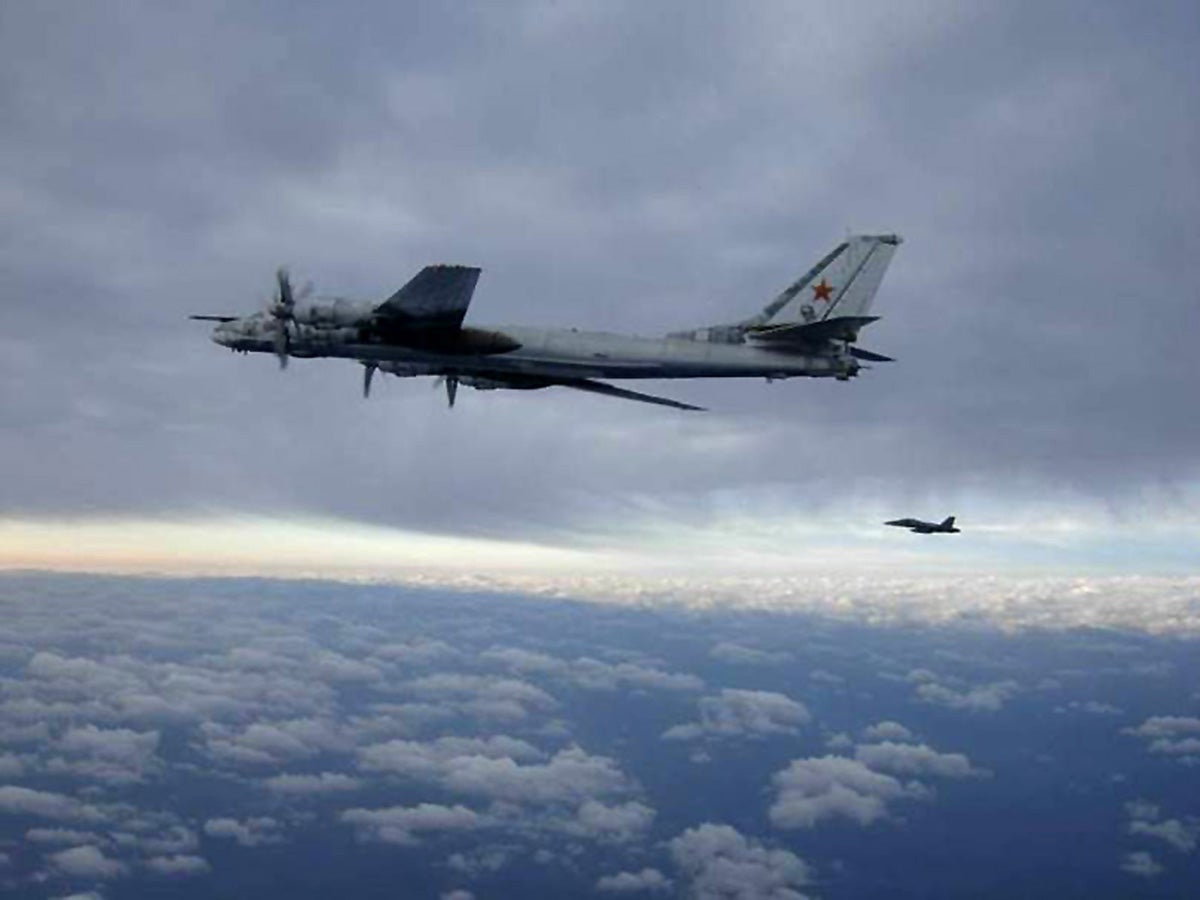 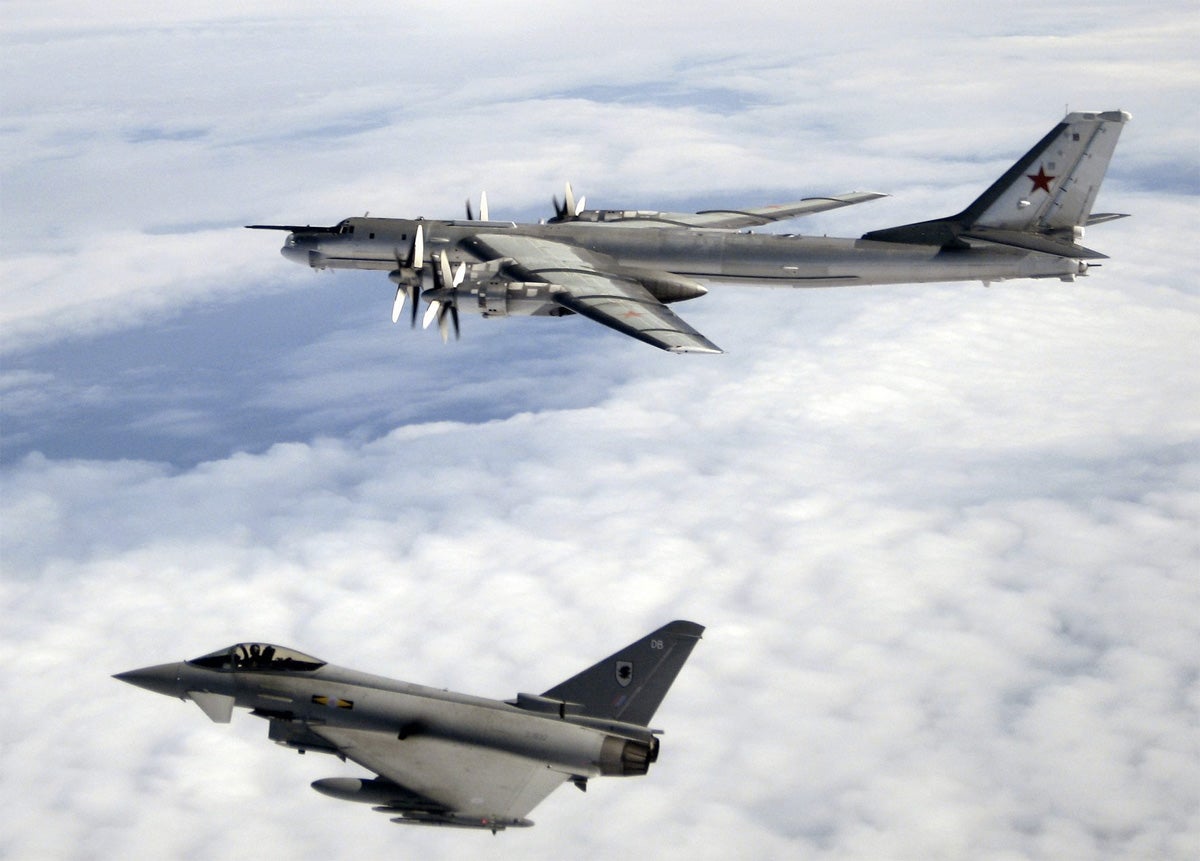 On 10th March 2010, two RAF Tornado F3 fighter aircraft of 111 (Fighter) Squadron were scrambled from RAF Leuchars (Fife) in the early hours of the morning to intercept two Russian TU-160 Blackjack aircraft in UK airspace off the North-West coast of Scotland. RAF Leuchars fighters have successfully scrambled to intercept Russian aircraft on more than 20 occasions in 2009-2010. 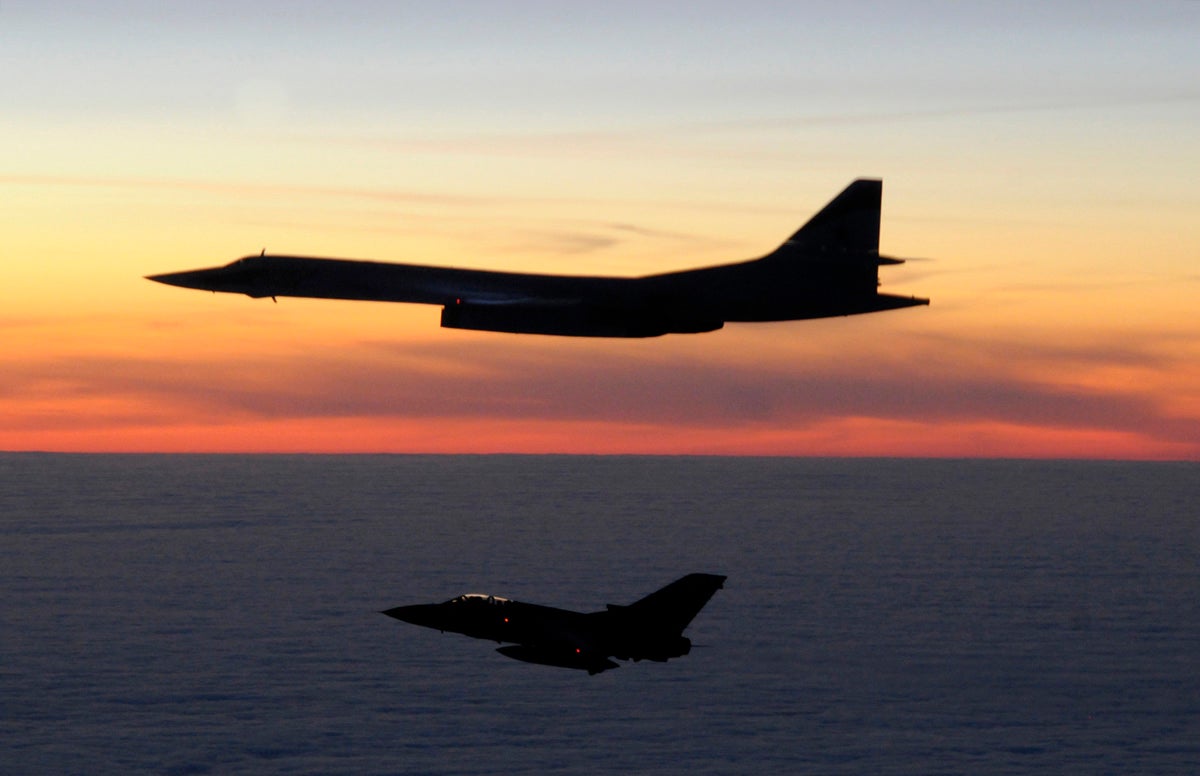 17 June, 2014: Royal Air Force Typhoons were scrambled to intercept multiple Russian aircraft in international airspace near to the Baltic States. The Russian aircraft were monitored by the RAF Typhoons and escorted on their way. 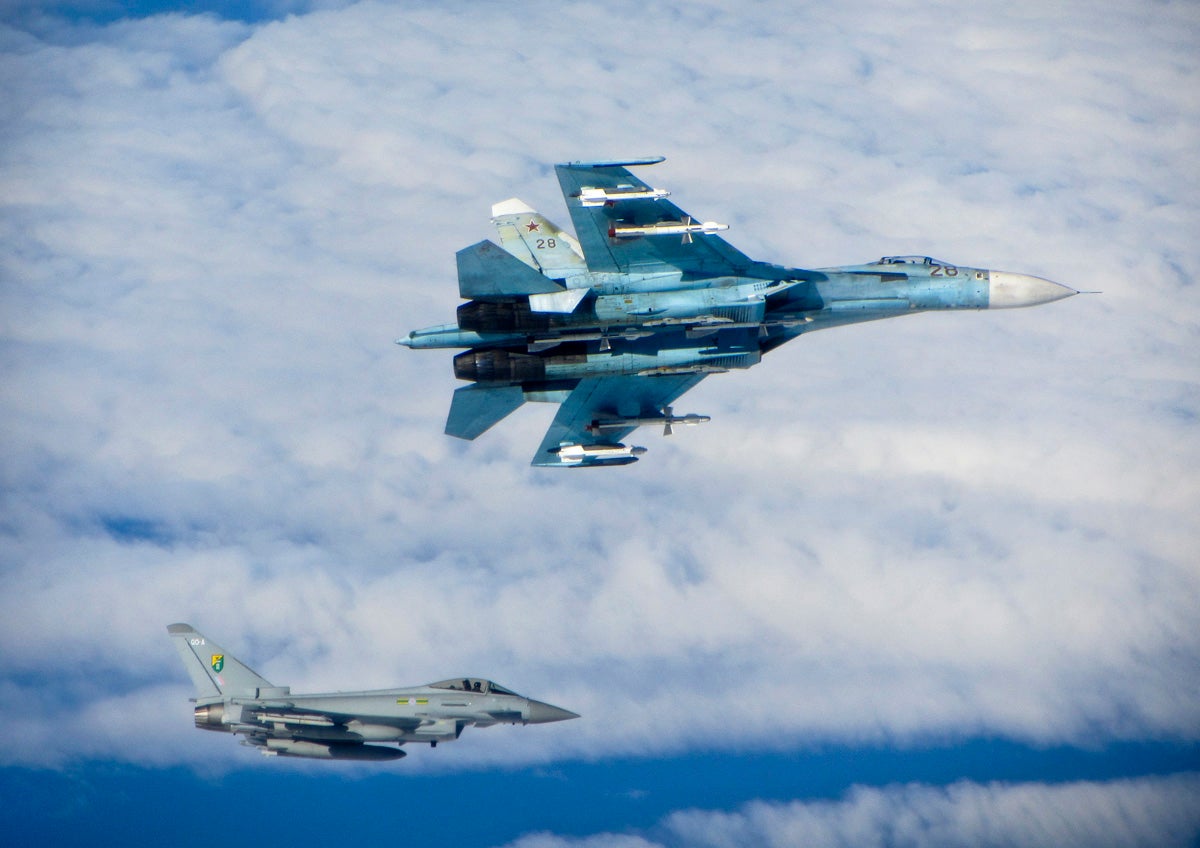