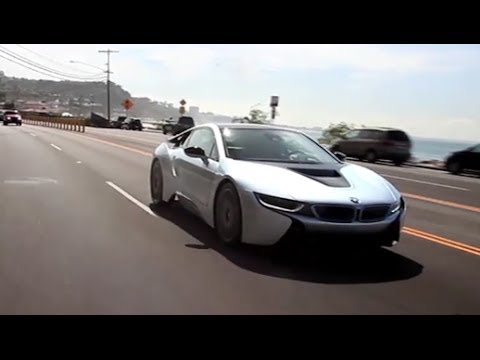 What’s it like to be behind the wheel of the BMW i8 hybrid sports car? Get in here and find out.

Chris Harris from /DRIVE is one of the first to get behind the wheel of the BMW i8, and overall, he found it to be a great experience.

The cabin, as we found from our own hands-on, feels like something out of distant-future sci-fi movies with its organic materials and stylish accents.

As far as fuel economy is concerned, the i8 reportedly gets 135 miles per gallon on the European tests (1.7 litres per 100km), and has a maximum range of 37km on its electric motor alone.

Taking it onto a bendy, twisty road sees the i8 stretch its hybrid sports car legs, but it’s found wanting somewhat when compared to the McLaren P1, LaFerrari and Porsche 918 Spyder. Admittedly, it’s very expensive hypercar company to be in, but it’s really the only market it can be compared to right now given that it’s a hybrid sports car.

If there’s one thing I like in the Chris Harris videos more than car commentary, it’s burger discussion. Whenever he takes a break in the reviewing, it’s for a burger, and then there’s a discussion of how good it was. This time, he test-drives the In-‘n-Out Double-Double, served Animal-style.