Giz Explains: Why Freezing Yourself Is A Terrible Way To Achieve Immortality

What happens after we die? It's a question that has plagued the human mind since we first developed the concept of "death". The search for an answer — and, more importantly, a means of circumventing its effects — has encited organised religion and served to shape one of the foundations of human culture.

We've built pyramids to house our dead in the afterlife, constructed terracotta armies to protect them, sacrificed the living in their honour, and even developed preservation techniques to ward off decomposition — all in the effort to somehow defy the permanence of death and resurrect at least a part, however intangible, of the deceased person. Ignoring the mysticism and religious fervor of these practices, they represent little more than elaborate burial techniques, which stubbornly remain a part of modern society.

But unlike the miraculous rebirth of one's soul at the hands of Osiris, the practice of cryonics promises the rebirth of a younger, fitter, and not-dead you — all through the miracle of future scientific progress.

Cryonics is the practice of preserving "legally dead" human bodies in extremely cold temperatures with hopes that future advances in medical science can revive their corpses and cure what ails them — or, at least, extract their memories and consciousness.

The basic idea is that by rapidly cooling the body after the heart has stopped, but before the brain begins to die from hypoxia, the body is rapidly cooled to extinguish the metabolism and halt decomposition. However, unlike short-term suspended animation techniques that are currently being developed to aid in cardiac and neural surgery, traumatic injury, and similar life-threatening emergencies, cryonics freezes you for the long haul.

All Dead vs Mostly Dead

Not unlike Miracle Max's distinction between the stages of death in The Princess Bride, there is a very fine but very important distinction between "legally dead" and "brain dead" as it relates to cryonics. Cryonics cannot be performed on someone who is still alive — regardless of how ill, the cryonic process would kill them and that constitutes murder. Cryonic preservation practitioners therefore rely on the information-theoretic definition of death rather than the standard, legal definition.

The subject must be deemed "legally dead" by a medical professional, which denotes when the person's heart has stopped beating. Between the time that the heart stops and the brain suffers irreparable damage from oxygen starvation is when the cryonic preservation process must take place, so that the cellular brain function may someday be restarted.

There are a number of facilities in the United States that handle cryonic preservation, including the Cryonics Institute in Detroit, the American Cryogenics Society in Sunnyvale, California, and the Alcor Life Extension Foundation in Scottsdale, Arizona. Each charges a hefty annual membership fee as well as upwards of six figures to actually preserve your corpse, though you can save a significant sum by preserving only your head or just the brain itself.

Once you're declared legally dead, an emergency response team from one of these facilities first will stabilise the oxygen levels in your blood to maintain minimal brain function during your transport to the cryo facility, as well as pack your body in ice and administer the anticoagulant heparin into your bloodstream to keep your juices flowing.

As soon as you reach the facility, a waiting cryonic surgery team will siphon the water out of your circulatory system and replace it with the glycerol-based chemical acryoprotectant, which does not form cell-damaging ice crystals at low temperatures, as water does. Specifically, it acts as an antifreeze, lowering the body's freezing point and increasing the viscosity of its fluids. Your body is then cooled on a bed of dry ice until it reaches -130C before being transferred to a tank of liquid nitrogen and further cooled to -196C. 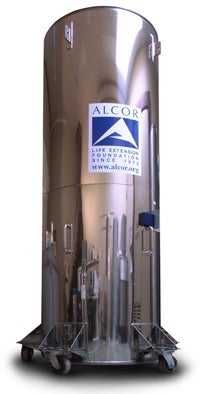 The practice of cryonic preservation got its start in 1964 when Robert Ettinger published The Prospect of Immortality, which put forth the idea of indefinitely freezing subjects for later revival. His idea was inspired by an earlier Amazing Stories science-fiction tale by Neil R. Jones called "The Jameson Satellite." Between the international instability of the Cold War, with its constant threat of thermonuclear holocaust, and the seemingly limitless technological advancements garnered from the Space Race, cryonics immediately found an enthusiastic following among early transhumanists — the first of whom, James Bedford, was frozen in liquid nitrogen at the Alcor facility in 1967.

Since its inception, the practice has grown into a pseudo-scientific cult that would make L Ron Hubbard proud. Ettinger himself was frozen upon his death in 2011 and, in all, some 270 people worldwide have been preserved in this manner with another 2,000 applicants on the waiting list.

Why It's Not Going to Work

Even if your preservation procedure goes according to plan, the process itself can ravage your corpse at a cellular level.

However, these technical challenges should be easy to overcome in the distant future — at least according to practitioners. As the Cryonics Institute website explains:

The process of cryopreservation involves cooling a legally-dead person to liquid nitrogen temperature where all physical decay essentially stops - with the goal of preserving tissues, organs and especially the brain with its associated memories and personality as perfectly as possible. A person held in this state is termed a "cryopreserved patient," because we do not consider the legal definition of "death" as a permanently irreversible state. We believe that the incredible advances being made today in biology, medicine, computers, nanotechnology and much more inevitably point to a future where advanced science will be able to revive these patients and restore them to health and even renewed youth.

Unfortunately, the "incredible advances" in technology that practitioners are relying upon to snatch them from death's doorstep are only about as plausible as the miracles described in the New Testament. These technologies aren't just currently beyond the current realm of possibility, many of them are little more than concepts derived from popular science fiction tropes. The available batch of conceivable resuscitation techniques won't be reviving these peoplesicles any time soon.

For example, the notion of tiny, mechanical nanobots flooding every cell in the body, as put forth by Dr K. Eric Drexler's Engines of Creation, sound like they'd be the ideal solution for repairing damage generated by the freezing process. Problem is, the computer-controlled "molecular assemblers" that Drexler envisions may not actually conform to the laws of physics as we know them. Consequently, Drexler's revival proposal has drawn a large amount of scepticism from the mainstream nanotech field.

Of course, even if a currently-unimaginable technology is somehow able to repair your physical structure, you'd still be a corpse. An unfrozen corpse, sure, but still dead. And unless this future techno-utopia has developed a means of reviving people as easily as reviving moss, you're probably going to stay dead. You're better off spending $100,000 on a cannon from which to blast your ashes than you are blowing that much on these liquid nitrogen-filled coffins. [How Stuff Works - RationalWiki - American Cryogenics - Cryogenics Institute - Wikipedia - Alcor]