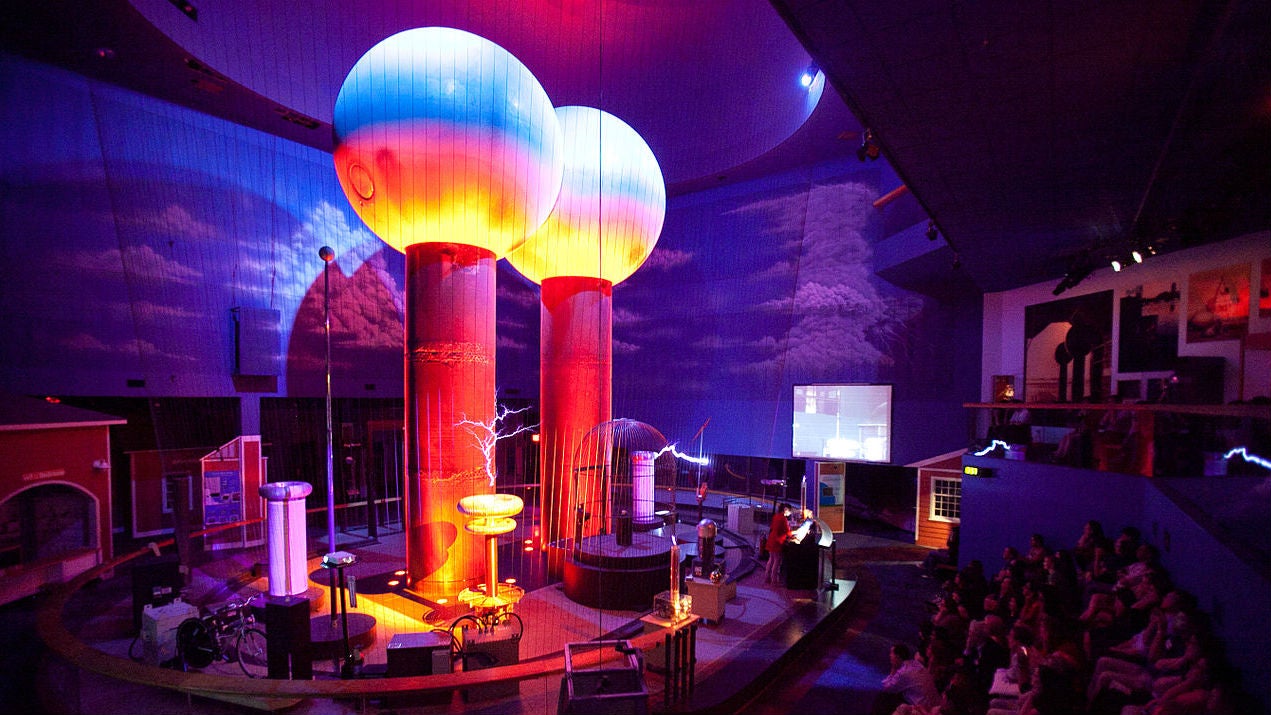 Visitors to the Museum of Science in Boston are always in for a hair-raising treat when they enter the facility's Theatre of Electricity. This small amphitheater is actually the permanent home of the largest air-insulated Van de Graaff generator on the planet — a pair of 40-foot high spheres crackling with up to five million volts of electricity.

A Van de Graaff generator is a mechanical electrostatic generator. Using the same principle as rubbing stocking feet over carpet to generate a small charge of static electricity to be unleashed on unsuspecting siblings, a VDG generator employs a moving belt of material running up the length of a stand into a hollow metal sphere to generate a charge at the positive electrode (at the top of the pulley) while negative charge flows into a separate ground electrode at the bottom. This creates a large electrical potential difference between the two electrodes, enough to power MIT's particle accelerator — which was being used for pioneering fundamental physics, nuclear medicine, and radiography research at the time.

The generator American physicist Robert J. Van de Graaff designed and built in 1929 with the assistance of colleague Nicholas Burke employed a simple silk scarf from the local five-and-dime. A subsequent one built in 1931, for all of $US90, used 60cm spheres and could produce up to 1MV, no small feat at the time. However, these were small scale prototypes. The mammoth generator he built in 1933 remains the largest of its kind ever constructed.

At MIT's Round Hill facility, the 12m tall VDG generator consists of a pair of conjoined, hollow 4.5m aluminium spheres — each outfitted with felt grommets and dehumidifiers to maintain peak conductivity conditions — mounted atop a 7m textolite column and powered by a 1.2m wide, 3600RPM paper-insulated belt riding atop steel pulleys. This setup was capable of generating up to five million volts, although two million volts is the average.

Over the next 80 years, VDG generators underwent a number of revisions including the advent of a three stage generation system known as a tandem Van de Graaff accelerator and the use of gas insulators like high-pressure sulfur hexafluoride which allowed the generators to pull out at around 14 million volts by the 1970s. T

Though VDG generators have been generally replaced by more modern means of creating current, Van de Graaff's generator from 1933 is still in operation at the Museum of Science in Boston where it, along with a couple of Tesla Coils, teach school kids about the power (and awesomeness) of electricity. [MIT 1, 2 - Wiki]