The Bizarre And Controversial World Of American Late-Night Lawyer Ads 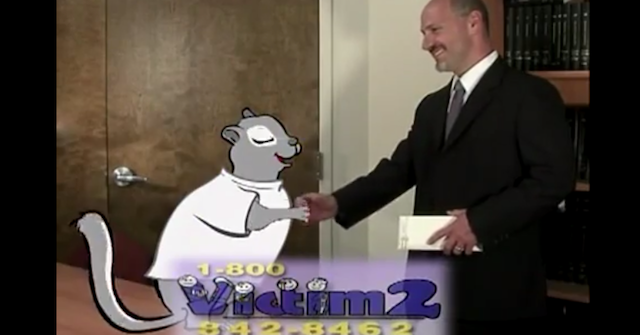 When it’s three o’clock in the morning and everything is going wrong in your life, there’s a certain kind of ad you might see on basic cable. Lawyers — usually guys — promise to battle the heartless, tight-wad insurance companies on your behalf. There’s disaster footage and stiff readings off of cue cards. The ads look like they were made in a high school computer class.


Believe it or not, lawyer ads are actually tightly regulated. There was an era before ads like these were allowed — and a big bang after which they couldn’t be contained. And now, the legal world is in a subtle, possibly endless civil war over how attorneys should advertise their services (and whether they should advertise at all).
| |
Of the most outspoken attorneys in front of the camera, there are Lowell “The Hammer” Stanley, and Jim “The Hammer” Shapiro and Jim “The Texas Hammer” Adler.

But lawyer ads were not always so direct.

Back in the 19th century, you’d see ads for attorneys on the front page of newspapers, alongside ads for doctors, and saddle and harness manufacturers. But in 1908, the American Bar Association put in new rules declaring that self-laudation (that is, speaking well of oneself) “defies the traditions and lower the tone of our high calling and are intolerable.”

Business cards were ok, but not much beyond that. The ban lasted until 1976, when the Law Clinic of Bates and O’Steen ran a small classified ad in the Arizona Republic. The Arizona Bar suspended the two lawyers (but only for a week or so). Bates and O’Steen appealed the case all the way to the US Supreme Court. And, in the now infamous Bates vs. State Bar of Arizona, the court ruled that lawyers have the same freedom of speech as everybody else — and that speech extends to advertising.

That pretty much opened up the flood gates. Which is how you get promises of a pain-to-rain alchemical process.

Today, laws governing lawyer ads vary state by state. Florida, Texas, and Iowa have some of the stricter regulations, although reprimands for breaking them are not that severe.

Massachusetts and Connecticut, meanwhile, are like the wild west of lawyer ads. Though this New York ad, featuring a bilingual anthropomorphic squirrel, has to be one of the most surreal:

Though Jamie Casino’s Superbowl ad has to be the most epic ever.

This story was produced by contributor Sean “The Hammer” Cole; a version of this story originally ran on the podcast Life of the Law. Sean spoke with On the Media host (and former Advertising Age critic) Bob Garfield; Elizabeth Tarbert, who is on the ethics council for the Florida Bar; divorce attorney Steve Miler; Lucien Pera, an attorney who advises nationwide law firms on their ads; personal injury attorneys Matt Hardin and Lowell “The Hammer” Stanley.

Music: “How to Cure a Hangover in April”- K-Conjog (Abandon Building)

99% Invisible, the greatest podcast of all time, is a tiny radio show about design, architecture & the 99% invisible activity that shapes our world. You can Like them on Facebook here or follow them on Twitter here. To subscribe to the podcast on iTunes,head over here.