The World's Most Amazing Structures Not Built By Humans 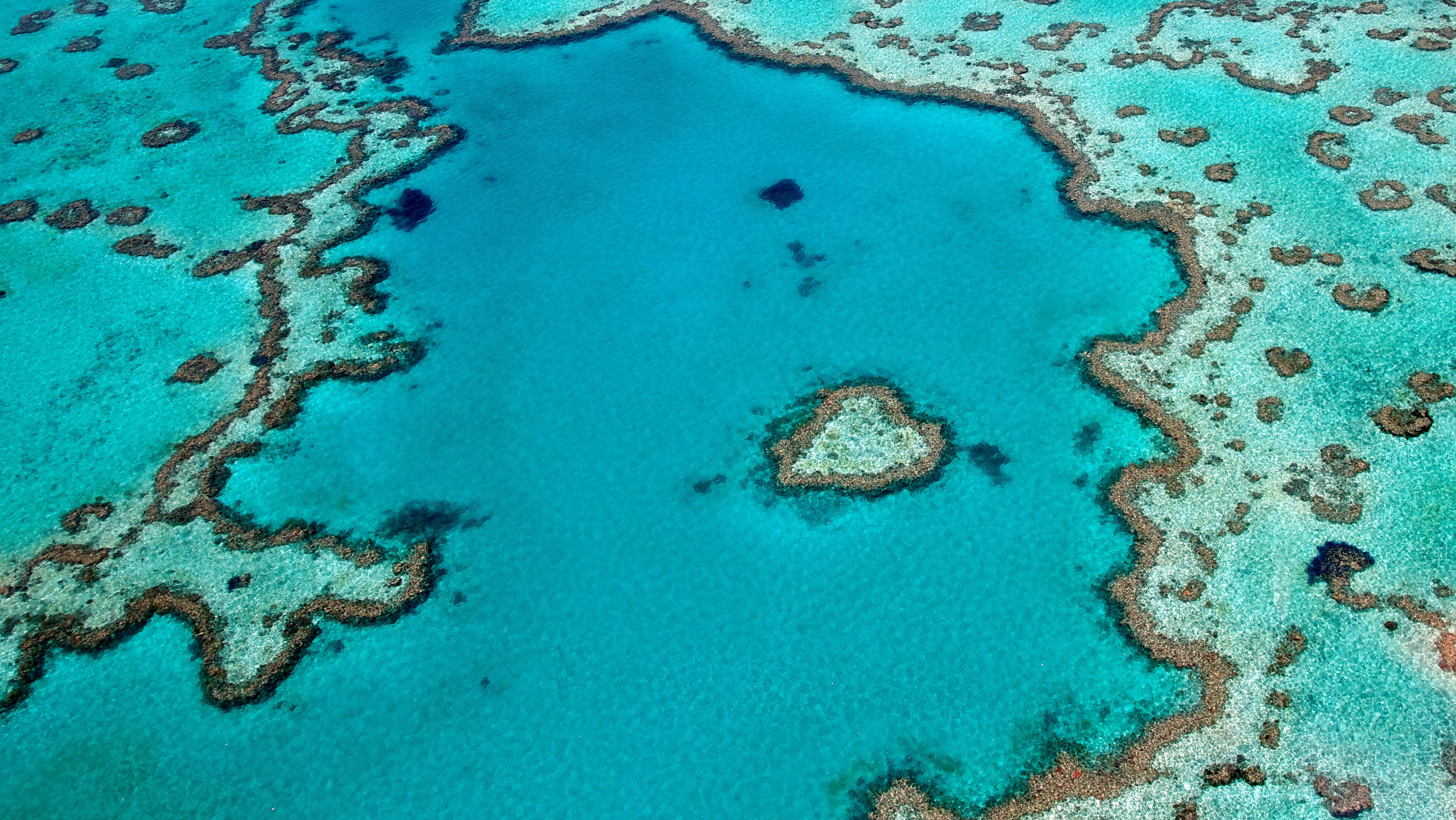 Humans are far from the only creatures with the ability to shape the environment in their favour. From insects and arachnids to marine invertebrates and mammals, the animal kingdom is rife with members who all construct their own habitats. Here are the most prolific builders in Animalia.

The Sprawling Structures of Hornets, Bees and Wasps

The phrase is "busy as a bee" for a reason. Bees are nature's standard bearer of builders, famous for their wax honeycombs. However, most natural bee nests are situated in caves, rock crevices, and tree hollows with cavities just 45 litres in volume on average and never more than 100 litres. That's not that big, compared to what they can do with a bit of human help. 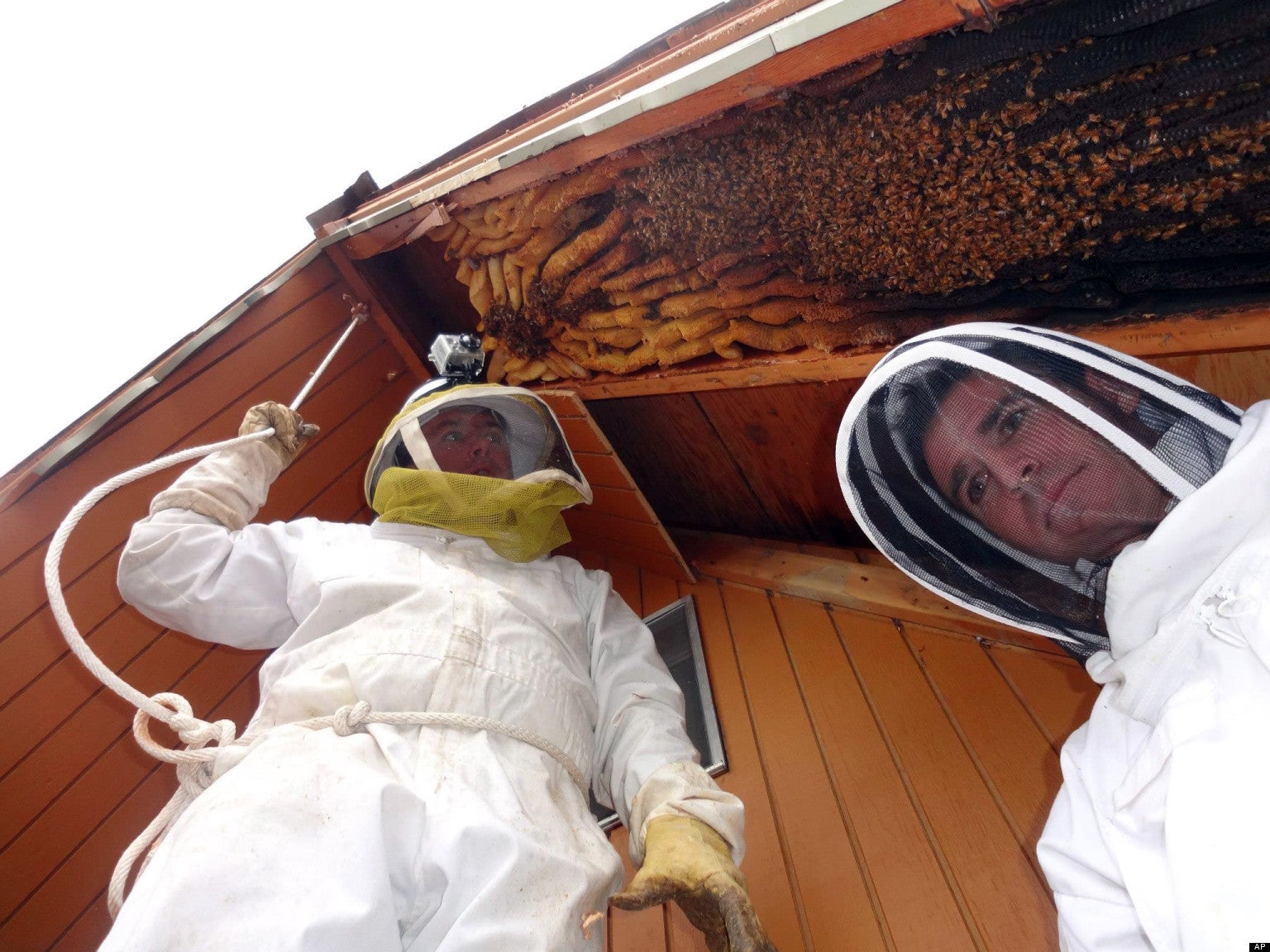 If given a suitable artificial habitat — say, the eaves of this Ogden, UT cabin — their hives can grow upwards of 4m long, 1.2m wide and 40cm deep. When this nest was discovered and removed in April, 2013, the extermination team removed some 7kg of honeybees alone — roughly 60,000 individuals.

Despite these impressive engineering feats, it's actually the bee's close relatives from the Vespidae family — hornets and wasps — that are the real masons of the insect world. Species including yellowjackets, baldfaced hornets and paper wasps all build their homes out of a pulp produced by mixing chewed wood fibre with the insect's saliva — a sort of natural papier-mâché. Unlike the European honeybee's hexagonal cell structure, hornet and wasp nests consist of a series of tiered, rounded combs which are sometimes covered by a solid outer envelope. And also unlike bees, these nests can never be "too large" for a colony. 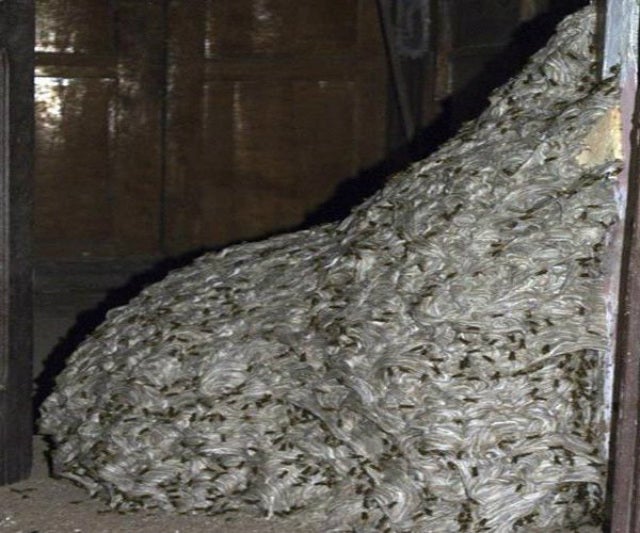 Last year, police in the town of San Sebastián de La Gomera, in the Canary islands, responded to calls of large numbers of wasps swarming around an abandoned house. Except that house wasn't abandoned. It was very much occupied — by the million-plus wasps that had taken over and built this monumental 21-foot wide nest. 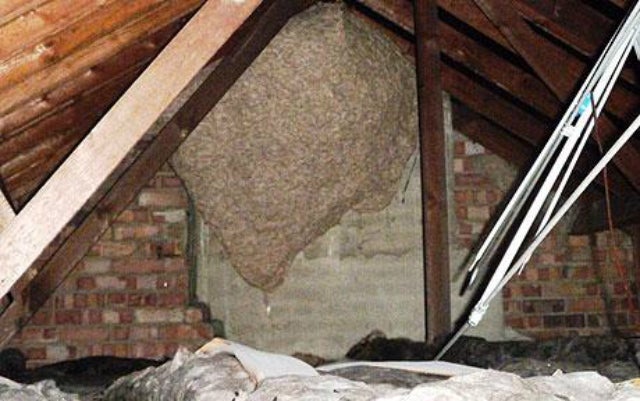 And in 2010, exterminators were shocked to discover a compact car-sized nest in the attic above a Southampton pub. Measuring 1.8m by 1.5m, this monstrous paper mass is the largest ever found in Britain. But it still doesn't compare to the biggest ever: a 4m by 2m whopper discovered in New Zealand in 1963. 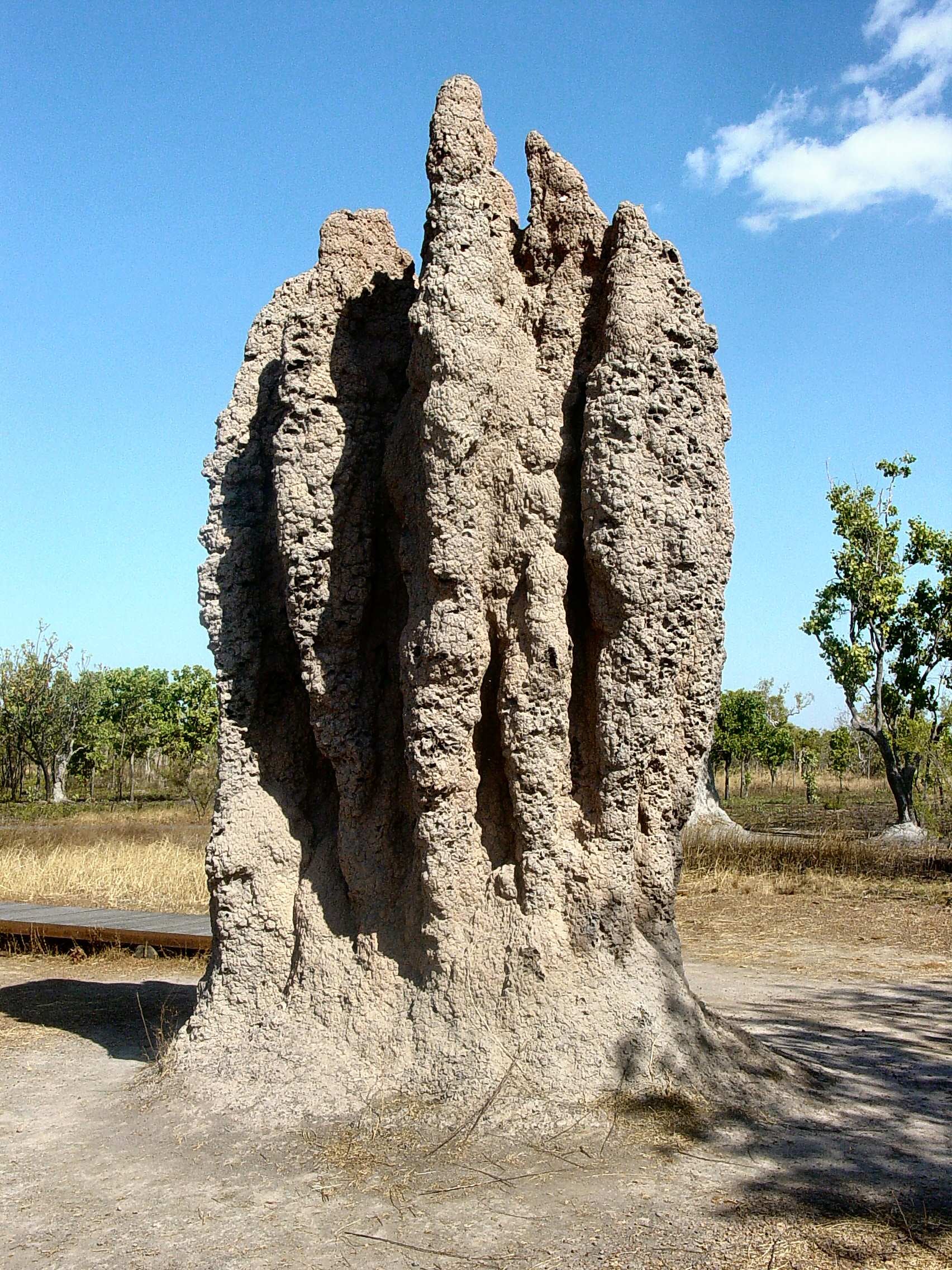 Another pair of close relatives to bees and wasps are equally prolific builders. Termites in particular are capable of constructing magnificent and overwhelmingly large structures, many magnitudes larger than any individual hive member. Similar to wasps, termites typically construct their mounds with a mix of soil, saliva and shit. The large tower you see in the image above isn't actually a living space, it's a chimney. Its walls are porous, allowing for improved oxygen circulation and thermal regulation of the below-ground colony. These structures can be found throughout Africa, Australia, and South America, the largest of which can reach 27m in diameter.

Ants, on the other hand, go even larger, with multiple colonies often combining forces to become "supercolonies." Until 2000, the largest such supercolony ever discovered was found on the Ishikari coast of Hokkaido, Japan, and housed an estimated 306 million workers and one million queens living among some 45,000 nests — all of which were interconnected by underground passages covering a total area of more than 670 acres.

In 2000, researchers in southern Europe discovered an Argentine ant supercolony comprised of 33 distinct ant populations living along a 6000km stretch of Mediterranean coast,with more than a billion workers in millions of individual nests. And, in 2004, entomologists in Melbourne, Australia discovered a 100km wide supercolony.

"In Argentina, their native homeland, ant colonies span tens of metres, are genetically diverse and highly aggressive towards one another. So population numbers never explode and they are no threat to other plants and animals," says Elissa Suhr of Monash University in Melbourne. "When they arrived in Australia, in 1939, a change in their structure occurred, changing their behaviour so that they are not aggressive towards one another. This has resulted in the colonies becoming one super colony."

However, for some migratory species, expansive underground palaces are completely unnecessary. Driver and Army ants are exceptionally voracious species, able to forage in areas of more than 1500sqm in a single day and strip an area bare in a matter of weeks. They construct their nests from the bodies of their own worker drones. Known as a bivouac, this metre-wide mobile fortress is comprised of anywhere from 150,000 to 700,000 workers and designed to protect the queen and larvae as the colony moves up to 18m an hour among its various hunting grounds. [PBS - Wiki 1, 2 - BBC News] 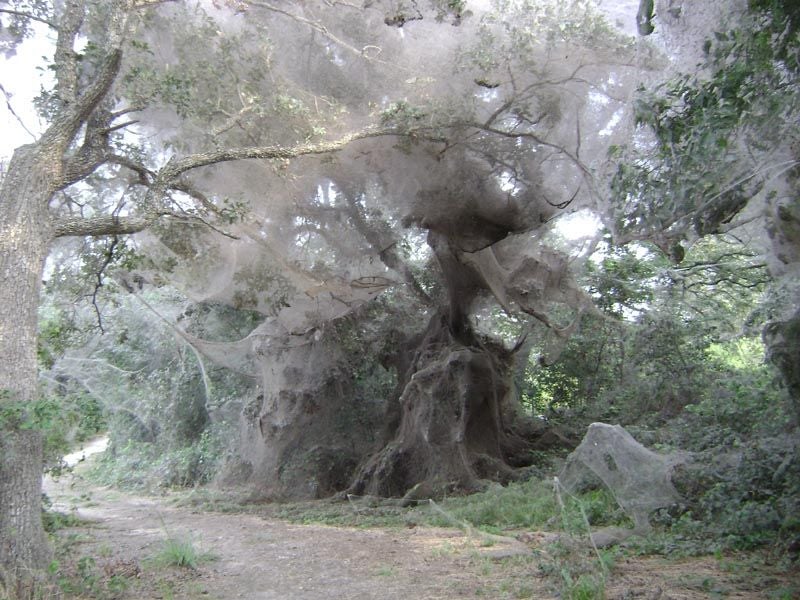 Spiders aren't the lone ambush hunters that they're made out to be. Some species of spider live together, such as the 50,000-member Anelosimus eximius colony discovered in Tawakoni State Park, Texas in 2010. This mega-web housed millions of spiders and covered an area the size of two football fields. [Wiki - Texas ENTO]

Silk Bags That Are the Perfect Nursery for Moths 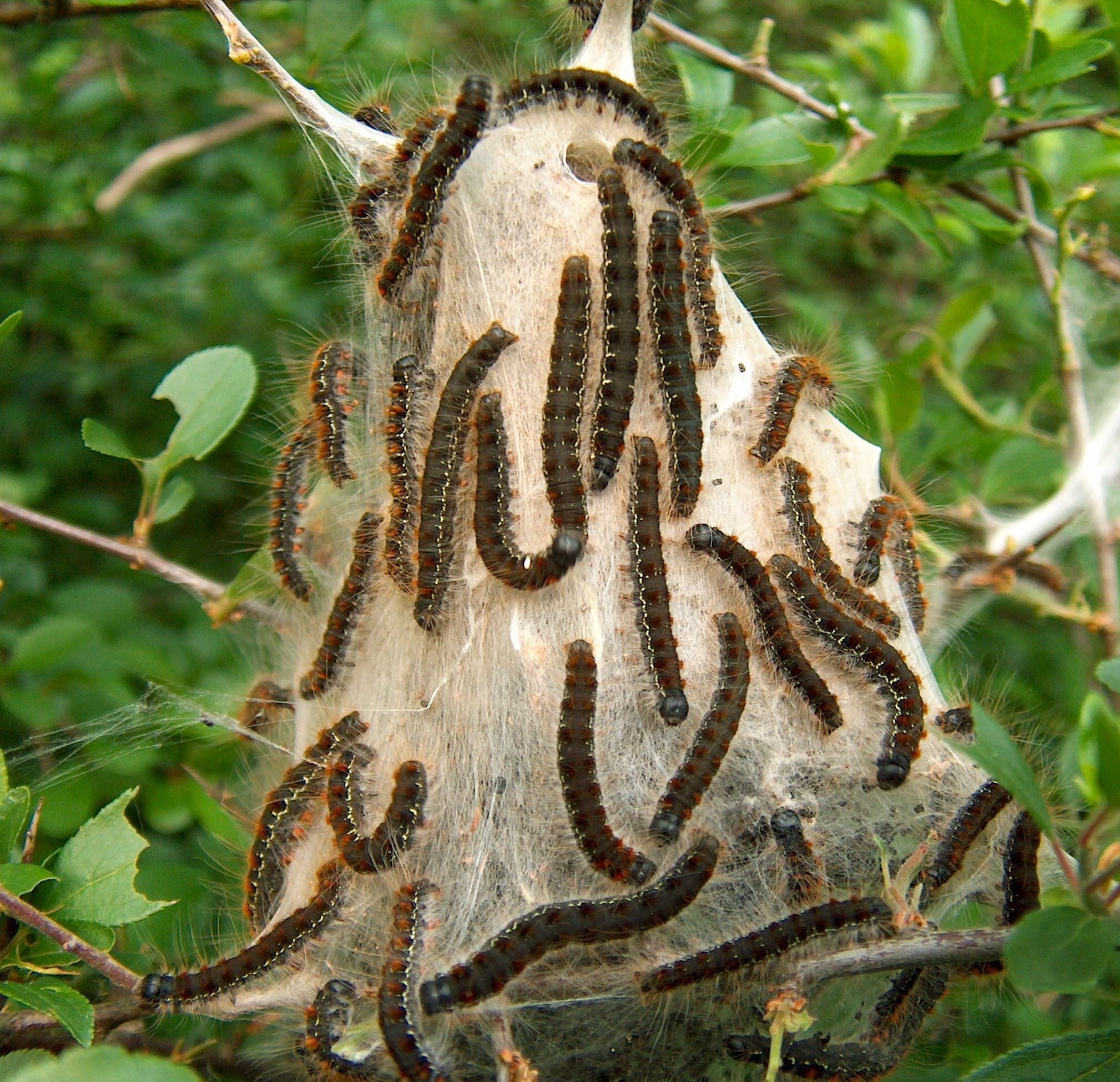 It's not easy being a caterpillar. Beyond simultaneously finding enough to eat and not being eaten themselves, caterpillars must mature as quickly as possible in order to meet their physiological objective of passing genes on to the next generation. One species, the Small Eggar moth (Eriogaster lanestris), accomplishes all three goals by weaving silken communal structures that passively regulate their temperatures — all in order to maximise their rate of development while protecting them from predators and providing a convenient base for feeding excursions.

The World's Biggest Beaver Dam Can Be Seen from Space 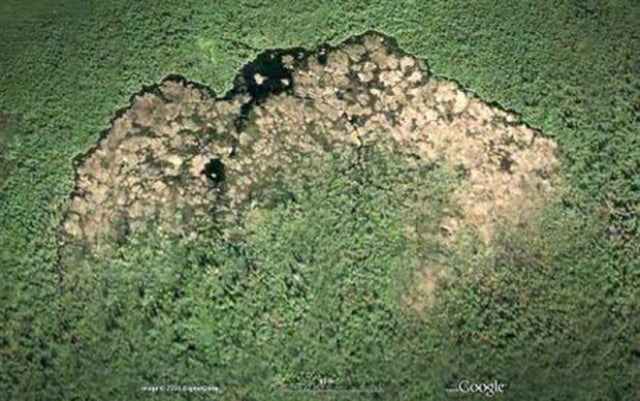 The giant brown mound in the image you see above is a single beaver dam. Built of mud, stone, and trees, beavers' large communal lodges are surrounded by massive moats to frustrate potential predators. At an astounding 850m in length, this example, discovered on the southern edge of Wood Buffalo National Park in Northern Alberta, Canada, is nearly twice the size of conventional multi-family dams (which top out around 457m in length) and more than twice as long as the Hoover dam. It's so big, it can be seen from space. [Gizmodo ] Running more than 2500km, spanning up to 65km, covering 345,000sqkm, and comprised of 900 islands and nearly 3000 individual reefs, the Great Barrier Reef is the single largest structure ever constructed by organisms other than us. Like a natural Great Wall of China — but larger, the Great Barrier Reef can be seen from space and is considered the single biggest structure made by living organisms on the planet.

These reefs have been cyclically growing and dying off for close to 60 million years, though the coral that visitors can swim amongst today have only been growing for the past 20,000 years or so. The reef isn't just home to thousands of species of marine life — it is itself a collection of billions of individual corals. [Odd Culture]