Someday, Surgeons Might Fix Your Broken Bones With Screws Made Of Silk 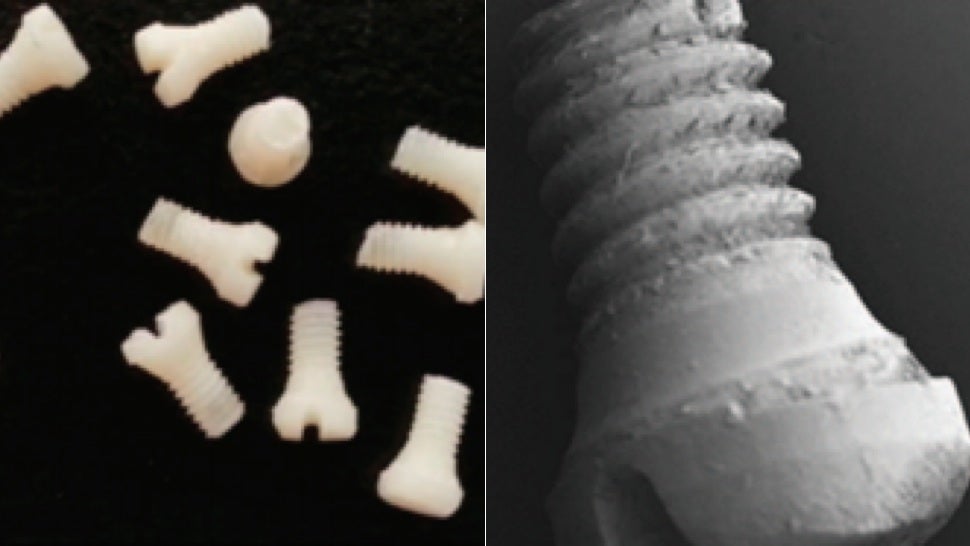 Surgeons have used metal screws to re-assemble broken bones for years, but there are drawbacks: if the metal corrodes, they have to come out. Biodegradable screws aren't as strong and can cause inflammation. So a team of Harvard and Tufts scientists came up with screws and plates that are as tough as metal, but biodegradable. The trick? They're made out of silk.

Once you get over the disquieting notion of bolting together broken bones, the physics of orthopaedic surgery is pretty similar to building a house. The metal screws used in bone reconstruction are self-tapping, meaning they cut through the bone to create their own hole as they're inserted. That toughness comes at a price: since the screws are so strong, they carry most of the load of the bone in which they're installed. Bone becomes stronger in response to physical stress, so the metal screws actually prevent the bone around them from growing stronger, a phenomenon known as stress shielding.

Biodegradable screws get around metal hardware's main drawbacks; they don't run the risk of corroding, they promote more natural bone healing, and their disappearing act eliminates metal hardware's long-term discomfort. But the biodegradable screws aren't very robust, requiring surgeons to drill a hole and carve a thread into the bone before installing them. Right now, they're only used in pediatric reconstructive skull surgery.

A team led by Samuel Lin at the Harvard Medical School and David Kaplan at Tufts University seems to have found the solution: robust, self-tapping, biodegradable screws made from silk. The team made the hardware by dissolving silk in alcohol, pouring the solution into screw-shaped molds, then machining threads into the resulting blanks.

In lab tests on rats, the screws showed excellent strength, promoting natural bone remodeling without inflammation. Additionally, the researchers point out that the silk screws are invisible to X-ray, making post-operative examination easier, and they could even be impregnated with drugs to prevent infection or encourage bone growth.

Right now, the team plans to begin using the silk screws in facial reconstruction surgery, but the hope is that these screws will soon be applicable in all sorts of orthopedic procedures. Clinical trials, as always, will hopefully begin soon. [Nature via New Scientist]