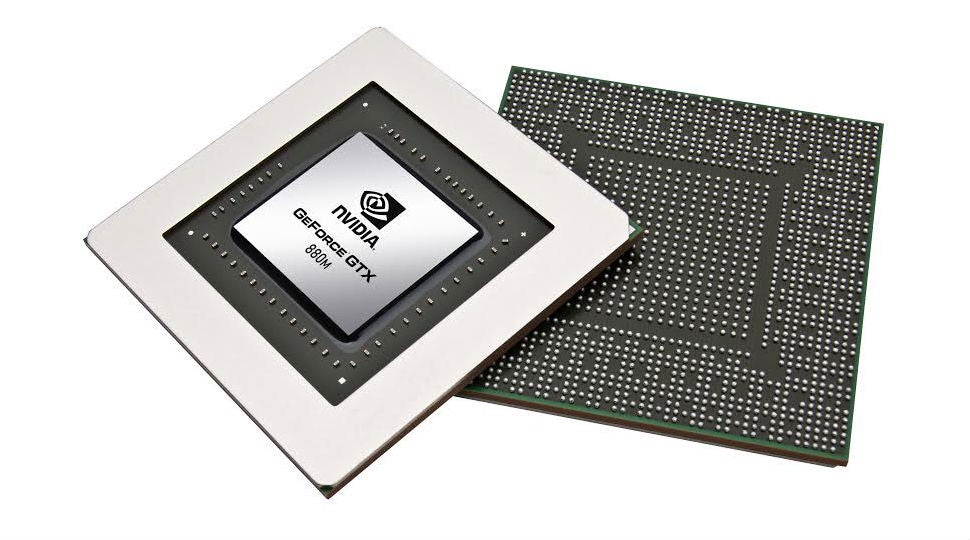 PC gaming on a laptop usually involves you lugging around a giant desktop replacement and eventually straining everything you care about on your body. NVIDIA wants you to play AAA games on a thin and light laptop with a battery that lasts more than 40 minutes. Meet the new GeForce 800M series.

Overnight NVIDIA unveiled six new dedicated graphics cards meant for laptops in the 800M series: the high-end GTX880M, moving down the range to the GTX870M, GTX860M and landing at the entry-level GTX850M. These are the ones meant for gaming.

The family of four has the new Kepler-based 880M and the 870M filling out the top half and the Maxwell repping 860M and 850M on the bottom. 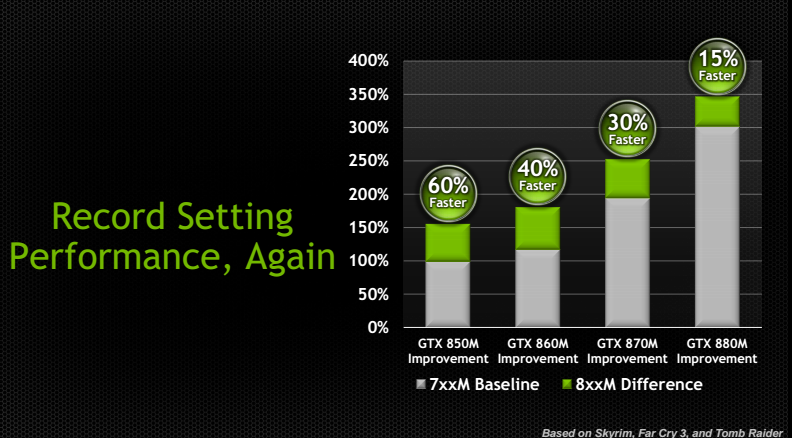 The lower end gets the bigger boost in power over last year's 700M models, with the switch to Maxwell offering 60 and 50 per cent improvement on the 860M and 850M respectively. The 870M and 880M improvements are a little more modest at 30 and 15 per cent. But that's enough to run games like Call of Duty: Ghosts and Metro: Last Light at 1080p on Ultra.

The 800M series is all about battery optimisation when you play your games. The average gaming laptop right now isn't smart enough to realise that it can kill itself within 40 minutes of play-time. That's mostly because gaming was originally done on desktops where power wasn't a problem. NVIDIA wants to build smarter chips to make your play sessions longer without needing a charger.

In test scenarios, NVIDIA was able to run Borderlands 2 at 30fps in 1080p on an Intel Core i7 machine with a GTX860M on-board, all powered by a 70-watt hour battery for a total of two hours and 11 minutes.

All of this extra battery life cleverness is managed through NVIDIA's clever little software suite known as GeForce Experience. It allows you to set up a Battery Boost profile for your games so that you don't have to go and change settings to optimise life in every single game.

The new NVIDIA graphics cards are also smarter about when they should be in use. Smart switching is automatically configured on every laptop running at GTX800M series card, meaning that your laptop will happily trundle along using integrated graphics when doing stuff like web-browsing and word processing, but will fire up your graphics card when it figures out you're gaming. Rather than just power the graphics card 100 per cent of the time, the laptop will dynamically manage it, giving you 2x the battery life according to NVIDIA.

As far as speed is concerned, NVIDIA hails the GTX850M as 30 per cent more powerful than the top-end GTX580M from two years ago. We'll have to see how that comes off when we benchmark it ourselves, but it's a good claim to be sure.

There are two other graphics processors in the line-up meant for non-gaming laptops. The GeForce 840M and the GeForce 830M are meant for bringing the majority of AAA titles to laptops that weren't originally meant to play games. Think an Ultrabook that can actually play games and you're there.

Using the new GeForce processors, NVIDIA was able to get Skyrim running at a consistent 30FPS on 1080p with medium settings. That was on a laptop packing an Intel Core i5-4210U processor with the GeForce 840M.

The new GeForce chips aren't meant for hardcore portable gamers, but they'll get you over the line in a pinch.

Here are the new laptops coming this year with the new GTX800M series:

These are just the launch models that NVIDIA is able to tell us about at the announcement of the GT800M. NVIDIA promises that we'll have six times the amount of thin and light gaming laptops in the next 12 months than we did in 2011. Happy days!

What would you want in a gaming laptop? Tell us in the comments!