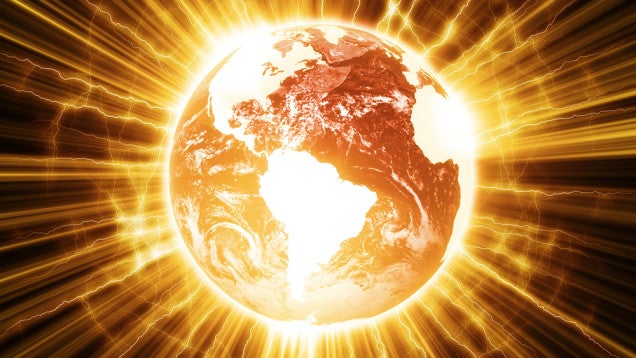 Hope you've enjoyed civilised life, folks. Because a new study sponsored by NASA's Goddard Space Flight Center says the world's industrial societies are poised to collapse under the weight of their own unsustainable appetites for resources. There goes the weekend... and everything after it for the rest of our lives.

The research article appears in the peer-reviewed scientific journal Ecological Economics, but Dr. Nafeez Ahmed, executive director of the Institute for Policy Research & Development, has a more understandable (but no less harrowing) summary over at The Guardian. Either way, the news isn't good — as the researchers point out, history doesn't seem to hold out any favour for advanced societies.

The fall of the Roman Empire, and the equally (if not more) advanced Han, Mauryan, and Gupta Empires, as well as so many advanced Mesopotamian Empires, are all testimony to the fact that advanced, sophisticated, complex, and creative civilizations can be both fragile and impermanent.

Who's to blame? You. Me. Everyone walking around outside your window. Even the technology we invented to save us from ourselves is contributing to our decline.

Is there a way out? Of course. But you're probably not gonna like it. Dr. Ahmed sums up the researchers' suggestions:

The two key solutions are to reduce economic inequality so as to ensure fairer distribution of resources, and to dramatically reduce resource consumption by relying on less intensive renewable resources and reducing population growth.

Which is just as difficult and improbable as it sounds.

Seriously, you should read the whole rundown of what the research says. It's eye-opening, and a serious call to action — if the crushing bleakness of what we've done to ourselves hasn't already doomed you to abandon all hope. Here, watch a funny video to make you feel better. [The Guardian]