How To Tell Real Diamonds From Fake 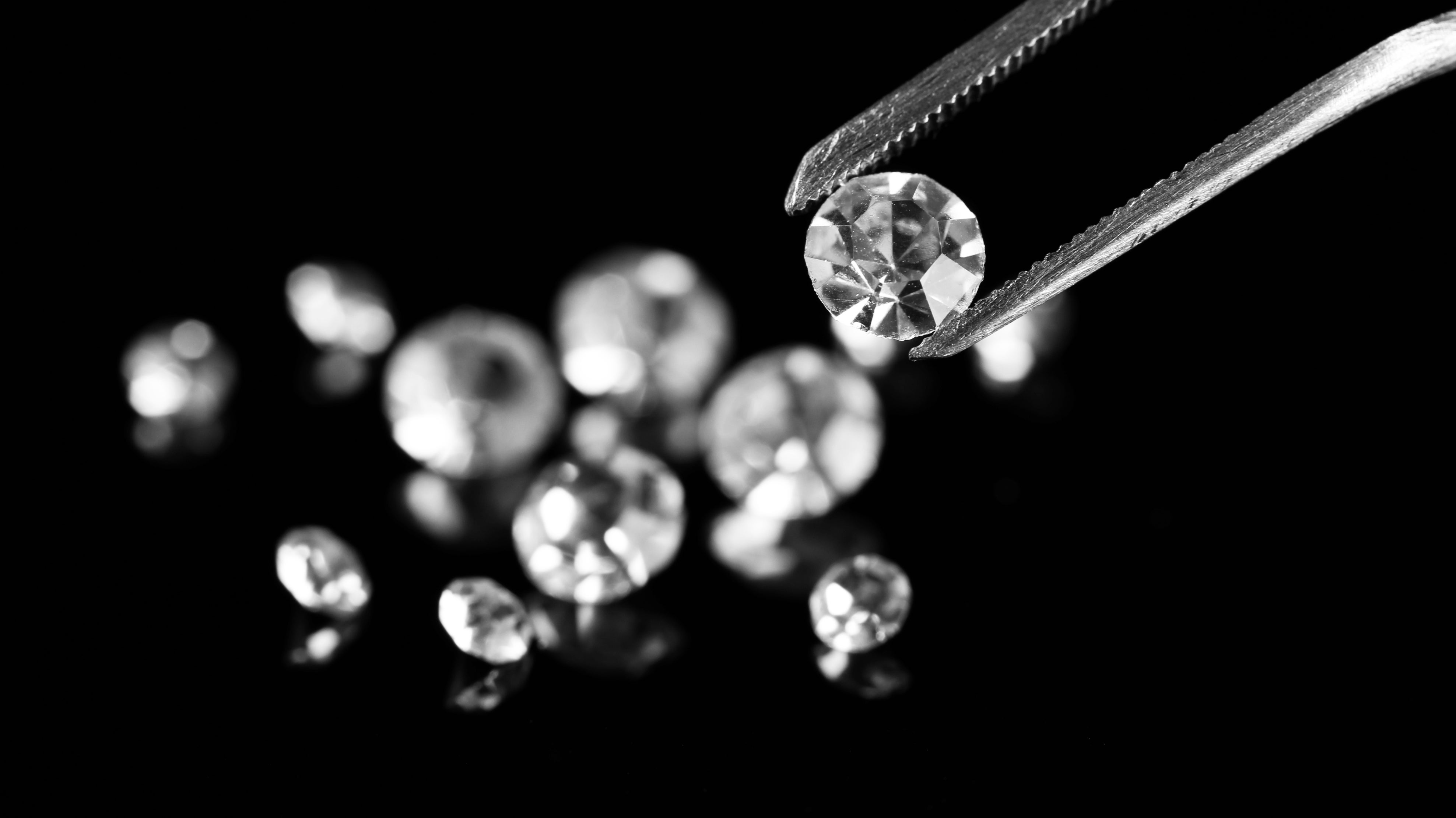 The jewellery market has been flooded with synthetic stones over the last several years; not just lab-grown gems but flat-out fakes. Here's how to tell if your rock is the real McCoy and not just a shiny bauble.

Until the mid-1950s, the only way to get your hands on a diamond was to dig it out of the ground. Unfortunately, naturally occurring diamonds require the immense temperatures and pressures typically only found at depths 140 to 190km below the Earth's crust to form (not to mention one to 3.3 billion years cooking time) and are only randomly pushed up to the surface by geologic and tectonic forces.

That inherent supply scarcity dissipated in 1953 with the advent of HPHT (high-pressure high-temperature) CVD (chemical vapour deposition) diamond synthesis methods. HPHT recreates the conditions found deep within the Earth, while CVD is a chemical process that produces the actual gem. These two methods currently dominate the lab-produced diamond market.

Two other methods, one involving detonation synthesis — wherein nanometre-sized diamonds are formed by exploding carbon-rich chemicals — the other utilising intense sound waves exist but have not enjoyed the commercial success their predecessors have.

While the specific properties of each diamond depends on how it was produced and for what purpose, lab-grown diamonds are, in every sense, the same as mined diamonds. In fact, specifically because they are grown in a controlled environment, lab-grown stones are often superior in hardness, and thermal and electrical conductivity compared to natural ones. Plus, lab-grown diamonds don't include the impurities or "inclusions" that mined diamonds do. Either way, from here on, both naturally and artificially-formed diamonds will be referred to as "real" diamonds.

Cubic Zirconia: Anybody who's watched QVC for more than 15 seconds has heard of cubic zirconia (CZ, as it's known in the industry). It's arguably the most widely-recognised faux diamond on the market today, and has been since its debut in 1976. Generated from the crystalline form of zirconium dioxide (ZrO2), CZ is hard — but not diamond hard — optically flawless and usually colourless, though it can be doped to a number of colour shades. It's valued at only a small fraction of what a real diamond of the same size and quality would be.

Moissanite: Though it shines like a diamond, is almost as hard as diamond, and even fooled its discoverer into thinking it was diamond for nearly a decade, the mineral moissanite is not diamond. First uncovered in 1893 by Henri Moissan, the mineral that bears his name is actually silicon carbide.

This mineral does not form readily in nature and is therefore produced almost universally through synthesis. First created in the lab by Jöns Jacob Berzelius (the man who discovered silicon) but was later commercialized for use as a diamond replacement on grinding and cutting tools by Edward Goodrich Acheson. Moissanite is among the hardest substances known to man. While the mineral is mostly used in industrial settings, it is regularly employed in costume jewelry as well. And though it isn't quite as common as CZ, moissanite is just as worthless compared to the real thing.

How to Tell Them All Apart

The easiest and most effective way to ensure your precious gem really is precious is to have it appraised by a professional. A number of diamond grading authorities, such as the Australian Diamond Grading Laboratory (ADGL) or the Diamond Certification Laboratory of Australia (DCLA), offer inspection services and issue a certificate attesting to the item's quality.

If you'd rather eyeball it yourself, though, here are a few things to look out for.

The 4 Cs Before the 1950s, appraising the value and quality of stones involved a mish-mash of competing standards and practices, which could lead to the same stone be evaluated differently depending on which where you had it appraised. However, the Gemological Institute of America (GIA) ended this confusion by creating the 4Cs, a grading standard that has since become the universally-applied method of judging stones the world over.

Since the 4C method is the gold standard of diamond evaluation, most grading lab reports will contain the same basic information on your stone and look something like this: 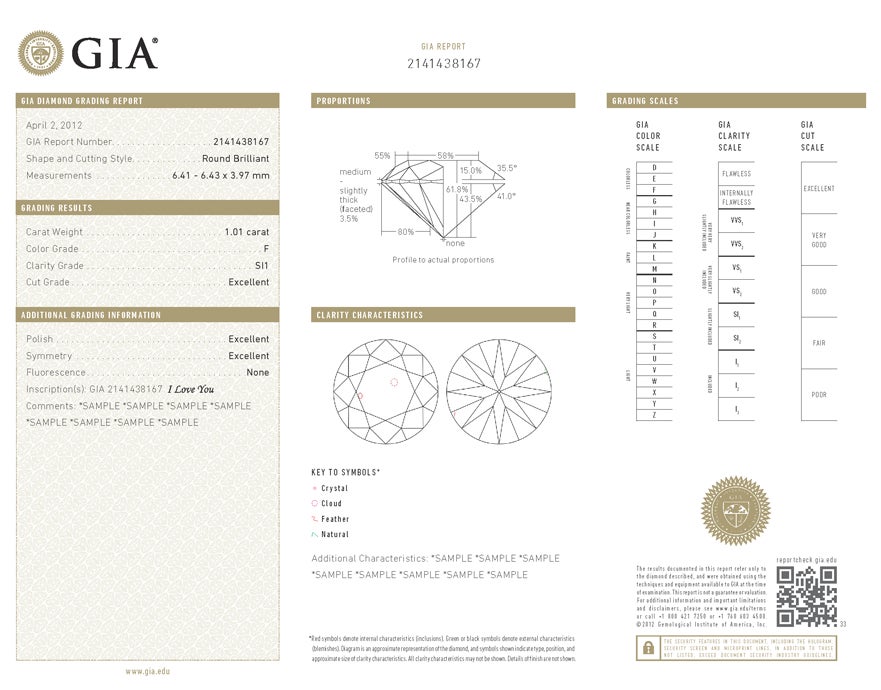 This certificate guarantees the authenticity and quality of the associated gem, so unless the certificate itself is a forgery, the rock in your hand is the real deal.

Now, if the diamond in question doesn't have a certificate, that doesn't automatically mean the stone's a fake. You should get it appraised by a professional, but if that's not an option here are a few simple tests you can use to find the real diamond in a sea of cubic zirconia.

Just Look at It

Diamonds possess a high "refractive index," which is to say that light passing through the stone is sharply bent by the crystal lattice. Cubic zirconia, on the other hand, has a much more pronounced prismatic effect, more "fire" as it's known in the jewellery business, while diamonds appear more like balls of cotton.

If the stone is loose — not mounted on a ring or setting — place it on its head (the not pointy end) atop a piece of newspaper. If you can read the print at all, the stone's probably fake. In fact, if you look through the top of a real diamond, its high refractive index will prevent you from even seeing the bottom point of the stone (helpful for checking mounted diamonds). Similarly, if you place the gem atop a dot drawn on a piece of plain white paper and it throws a double refraction — such as a ghosted image of the dot — or you can see a circular reflection in the stone, that rock is not diamond but likely is moissanite.

Fakes Are "Too Perfect"

Being products of natural processes with very little quality control, mined diamonds often have a mild yellow or brown tinge and will include flecks of other minerals, known as inclusions, within their lattice structure. CZ, conversely, is generated in sterile environments and are therefore flawless. This should not be your only determining factor of course; you might be holding a lab-grown diamond, or have just won the gemological lottery.

You can also take a look at the girdle of the stone (the widest point of the cut where the body begins narrowing back into a point). If the girdle is smooth or rounded the stone's CZ. Diamonds always have flat facets; there may be a ton of minuscule facets that feel like the outer edge of a quarter, but they're never rounded.

Fakes Are Twice as Heavy While CZ looks uncannily like diamond, it is actually a much more dense material. With a specific gravity of 5.6 to 6.0, CZ weighs roughly 1.7 times as much a diamond of the same volume. If you have an unmounted stone you know to be either CZ or real diamond, place both rocks in your hand and bounce them gently, you should be able to immediately tell which is the heavier cubic zirconia and which is the lighter diamond.

Fakes Fog Up A low-tech alternative method uses only your breath. If you breath on a real diamond, trying to fog it as you would a pair of dirty spectacle lenses, it will not fog up. Since diamond is such a potent heat conductor, the fog will dissipate instantly. If you notice fog as you pull the stone away, it's likely a fake.

Put It to the Test

The methods described above should only be used as general estimations. However there are a number of far more accurate tests, though these require commercial appraisal devices to conduct.

Electrify It: It is nearly impossible, even for trained appraisers, to tell the difference between moissanite and diamond by looking at them. As such, any jeweller worth their weight in carats will have an electrical Diamond/Moissanite Tester on hand. These handheld devices run a small amount of electrical current through the stone to measure its conductivity. Since diamond and moissanite conduct electricity at differing efficiencies, they can quickly be differentiated using this method.

Turn Up the Heat: Diamond is as potent at conducting heat as it is at conducting electricity. To test whether your stone is real or not, a jeweller's Thermal Conductivity Diamond Tester (a fancy name for a heat probe) can can find out in 30 seconds or less. These devices employ a pair of thermistors to measure the amount of heat is conducted from the device's hot copper tip to the stone. And since diamond conducts heat more efficiently than synthetics, if your stone is cool to the touch after applying the heat, it's very likely real.

While these being familiar with these testing methods won't likely make you the next Pawn Star, they could help you avoid a costly jewellery faux pas.