How The World Would Look If Air Were Truly Transparent 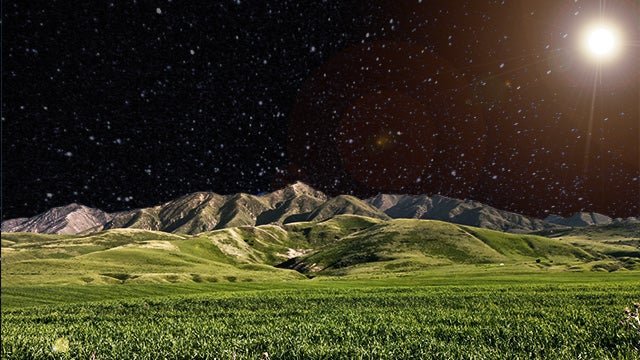 For the purposes of this question, I'm going to assume that "truly transparent" means that air and its constituents are no longer able to absorb and re-radiate incident radiation, which in visible light seems to be our definition of transparency. To make things much more fun, let's make this true over all wavelengths.

In this situation most phenomena associated with incident light and other forms of radiation's interactions with the atmosphere cease. Rayleigh scattering no longer makes the sky blue; instead, it is black as night all the time. The moon would be visible at all times. Because of the lack of Rayleigh scattering, there would also be no diffuse solar radiation (at least from the atmosphere), and the sun would be the same colour no matter what its position on the horizon (unlike now, when the colour of the sun to an observer depends on the distance through the atmosphere that the light passes through). Shadows would be sharper due to the lack of diffuse radiation and any light not directly incident from the sun would come from refracted light off of objects on the ground or crystals in the air.

Speaking of light incident from the sun, a lack of an atmosphere also means a lack of refraction. If in this world (wo)man wanted to do some stargazing, he would have as clear of a sky as Hubble does - at least, as long as there are no clouds.

The overall effect, visually, is the same as if we were looking out from a place where there is no atmosphere. Where have we done that before? 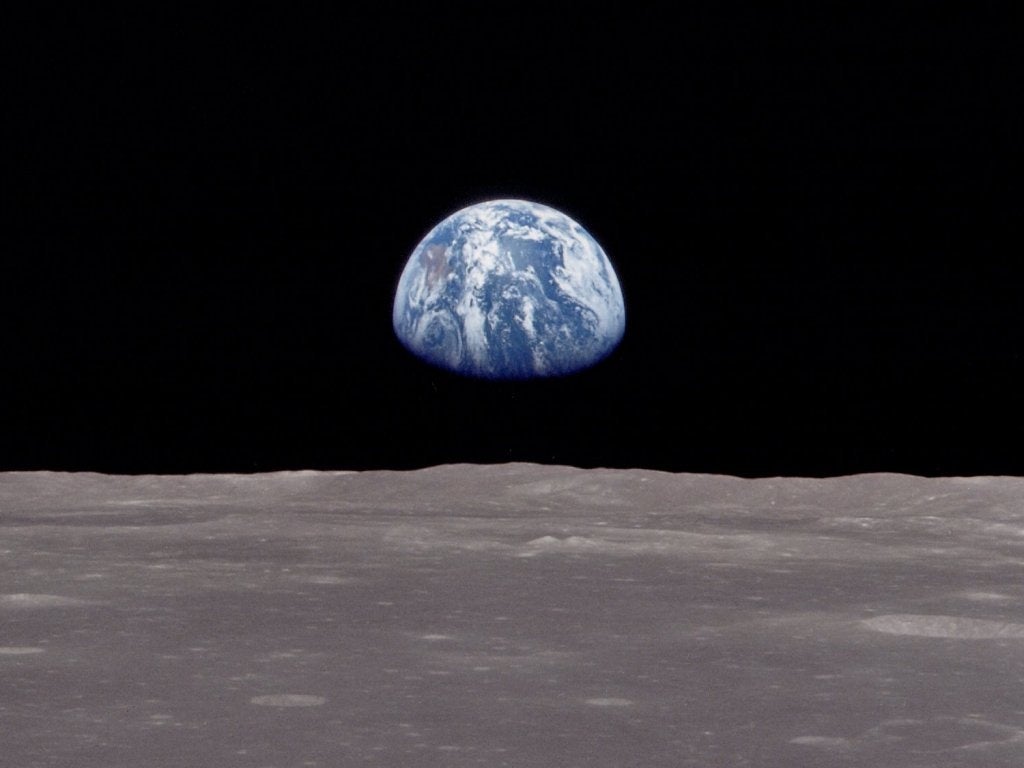 More significantly for life, since the Earth would no longer have the protection of the ozone layer the amount of incident UV radiation as a proportion of total radiation would be drastically higher. Life has found ways to protect itself from high levels of incident radiation, including melanin production and multiple copies of genomes. It seems likely that any form of plant or animal life that existed would also have this type of adaptation along with other types of fitness-enhancing traits such as those seen in radiation-tolerant extremophiles. 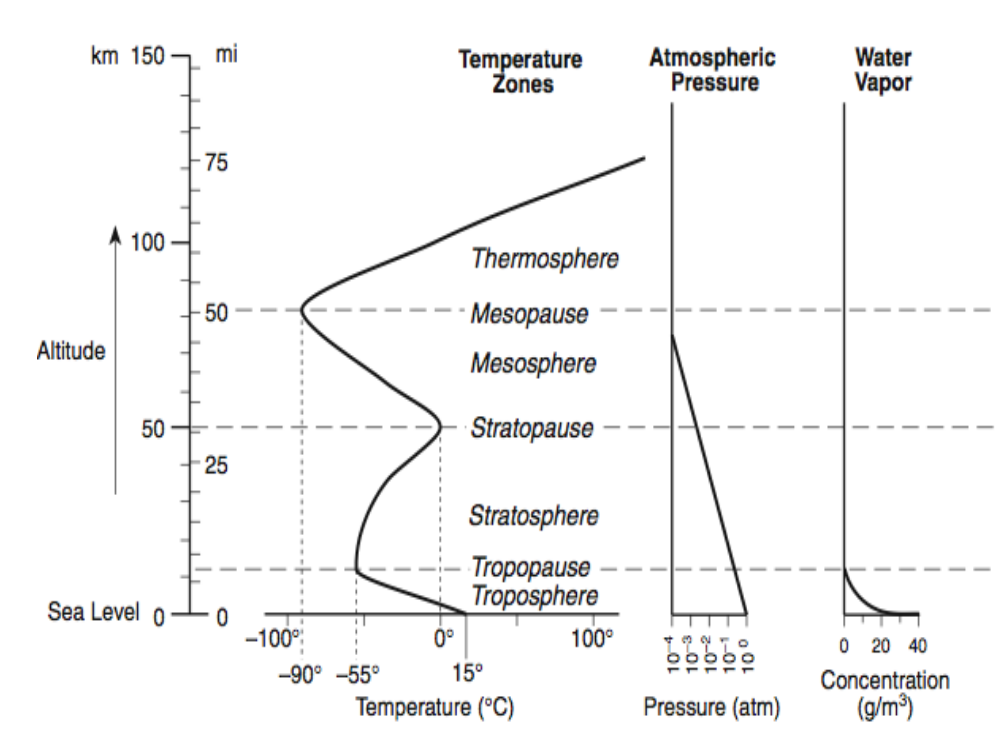 The net result of the change in heat transfer to the atmosphere makes the temperature gradient near linearly decreasing with height (assuming that no impassable layer forms). The composition of the gas would change as sublimation or condensation points are reached. At the upper levels of the atmosphere we might see carbon dioxide crystals; at the very bottom, things would be much hotter - not least because of what would also be happening to the ground.

I'm no climatologist/geologist/atmospheric scientist, but what I do know is that making the atmosphere transparent would greatly increase the incident radiation to the ground. Since all heat transfer formerly captured by the atmosphere would take place at the surface, incident radiation there would be higher, but temperature... not so much (see below). Temperature differences due to occlusion of the sun or differences in heat capacity would drive particularly violent winds on a regular basis; think about the "sea breeze" effect, multiplied by several times the temperature difference, or the difference in temperature between shadow and lit areas.

The net effect of a transparent atmosphere in this case would almost certain be to make things in that atmosphere much cooler than before, despite increased insolation.Most objects on Earth act as decent blackbody radiators for certain wavelengths, and the rate of radiative heat transfer is nonlinear and increasing with respect to temperature (proportional to T^4 for an ideal blackbody). So re-radiation to space would be up - and the ground a lot brighter. However, overall temperatures would be lower in the atmosphere and on the surface because total heat transfer to the Earth itself would be lower, given that the air is neither there to absorb the incident radiation or the Earth's re-radiation into space. But that's expected, though, since what making the atmosphere transparent effectively does is remove the greenhouse effect. The average temperature of the Earth will drop by at least about 10 degrees C, probably more.

So, what might the world look like? The world would be a much codler, violently windy place, with dark skies and ground alternately blindingly lit or in inky darkness. In a more likely scenario, runaway albedo effects on top of the already existing drop in temperature might cause the Earth to become a snowball since the albedo of ice would be that much more significant in a world where heat absorption from radiation incident on the surface is that important. In a few places open liquid water might exist due to geothermal sources of heat.

Surprisingly enough, there are theories of abiogenesis that posit the formation of life in ice from organic molecules, ammonia, and cyanide, or some other cocktail of ingredients, so it's not too much to suggest that life could have formed in this type of environment. However, overall the amount of total biomass that the planet would be able to support would have been small from the beginning, and evolution correspondingly slower - not to mention the fact that metabolic processes (and thus reproduction) is much slower at lower temperatures.

Perhaps today we might only still be a world of primitive copiers or prokaryotes, still going through the equivalent of our world's first billion years of evolution, having not progressed even to the exhaustion of our early oceans' chemotrophic sources of electron acceptors. Or perhaps the world might have radically changed due to some unknown cataclysm - perhaps a meteor's flung particulates finally sealing the fate of the few sources of open water left... or showering heat-absorbing black ash on the open ice, decreasing albedo, warming the climate and giving life a fighting chance.

This post was republished with permission from Josh Velson, a chemical engineering consultant for bio and petrochemicals. It originally appeared on Quora.