Get Out Of Here: A Guide To Hudson Valley Day Hikes

Getting out of the city has never felt so good. Gizmodo tied up its boots, donned a warm hat, and hit the Hudson Valley in New York for a first-hand look at the easily forgotten world of urban day hikes.

Welcome to Fitmodo, Gizmodo's gym for your brain and backbone. Don't suffer through life as a sniveling, sickly weakling — brace up and get the blood pumping! Check back each week for the latest in fitness science, workout gear, exercise techniques, and enough vim and vigor to whip you into shape.

Cities can be both dispiriting and overwhelming; even normally leafy neighborhoods feel abandoned and dead, and taking even a short walk quickly becomes a chapped-lipped anticlimax of just hoping for the wind to die down and a warm, heated room to appear — anywhere, please! — soon. In New York City, this weird and dreary feeling of lifelessness is seemingly magnified by the fact of being stuck on an island and, for those of us without easy access to Central Park, whole months can drip by seemingly without a single experience of biological vibrancy.

Luckily, though, New York happens to be just a short car or train ride away from huge expanses of undeveloped and truly extraordinary landscapes: forests, mountains, lakes, rivers, and trails. And those trails are a great way to get back into shape for spring. As we set out to prove, with the weather changing and the days getting longer, there's no longer any justification for hanging out indoors or stuck on an island in the shadow of towers: using a day trip north of New York as our example, let's step out into the hills and find some cheap and easy ways to dirty up our boots and start moving again for a new season.

My wife and I decided to work off some of our long-accumulated winter funk with a scramble up Breakneck Ridge, a spectacular and, on the map, seemingly easy hike up from a small parking area near the Hudson. Part of the Hudson Highlands State Park, it was named by Newsweek as "one of the top 10 hikes in the country; then www.trails.com followed up by calling it the number one hike in all of North America." We were sold.

The trailhead is easy to find — it is just beyond the northern end of a small road tunnel on Route 9D. In fact, you hook back up and over the road tunnel to begin your ascent. Parking, at least for a blustery March Sunday morning, was also readily available and there were many small groups of hikers heading to and fro on the various trails that come together here. This ease of parking would not be the case in summer, I suspect, as many more people will be hitting the hills to escape the summer heat, which means now is a great time to go. There is also a train station literally right there, so you can ride the rails out of town without ever setting foot or butt cheek in an automobile. Simply get off at Breakneck Ridge (but note that it's a station only open on Saturdays and Sundays).

So far so good, right? The first surprise, however, is that the opening stretch of Breakneck is not a trail in any real sense of the word, but a more or less vertical scramble up boulders, small crevasses, and overhangs. It is not, it turns out, ideal for the casual hiker. 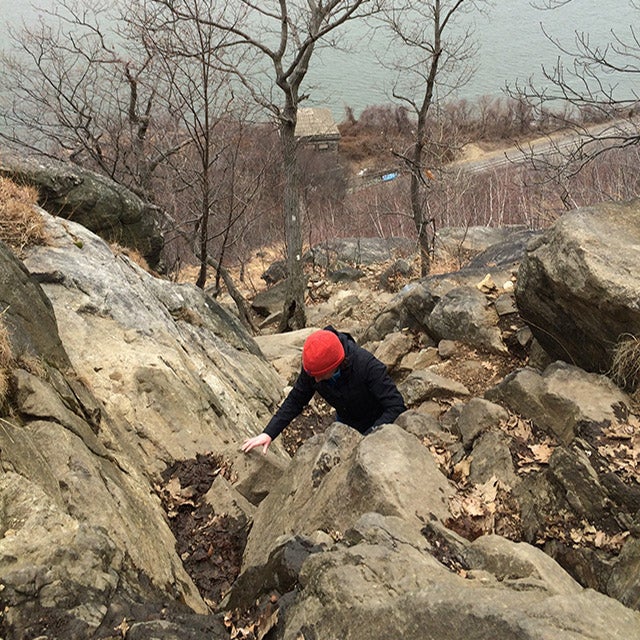 The route itself is marked with small white squares painted onto the rocks, though it can be easy to lose sight of them as you keep one eye out for handholds, the other out for stable footholds, pulling and pushing yourself up the rockface.

In fairness, it was not very challenging — but I would say that I am a flexible, experienced day-hiker, and I have a lot of energy — so this particular route up is not something to consider attempting if you aren't prepared to haul yourself up small boulders or if you suffer from even a bit of vertigo.

A quick gear suggestion here: stiff, ankle-protecting boots were absolutely key on these rocky ascents. I deliberately wore my Red Wing work boots (mostly because I was tired of them looking so dorkishly clean), and their performance was something of a revelation.

The ankle support meant I could dig my shoes into the cracks between rocks and still support myself even at strange angles, and the heavy duty soles came in very handy later while stomping down through some snowy sections on the return trail.

In any case, the second major challenge of the hike is that, once you get to the first peak, with its genuinely awesome views of the Hudson, peering down from a small dome pierced with an American flag, as seen in this Instagram — 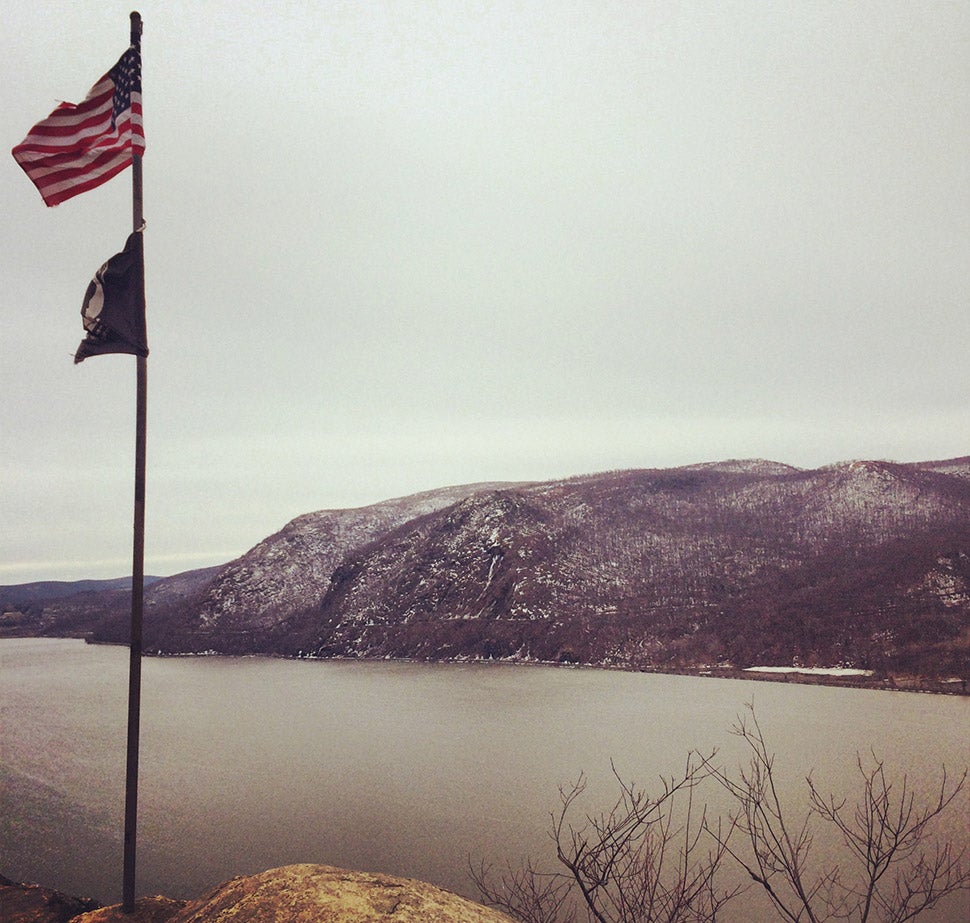 — you then turn around and realise that not one but several more peaks await you. However, the climb up is strenuous enough that I would not recommend turning around here and going back down again. So the only direction is up, deeper into the woods, and further from the roadway — and it's worth it.

The views only get better and better the higher you ascend.

Eventually — after a solid 90 minutes or more of vertical scrambling — you hit what passes for a trail. 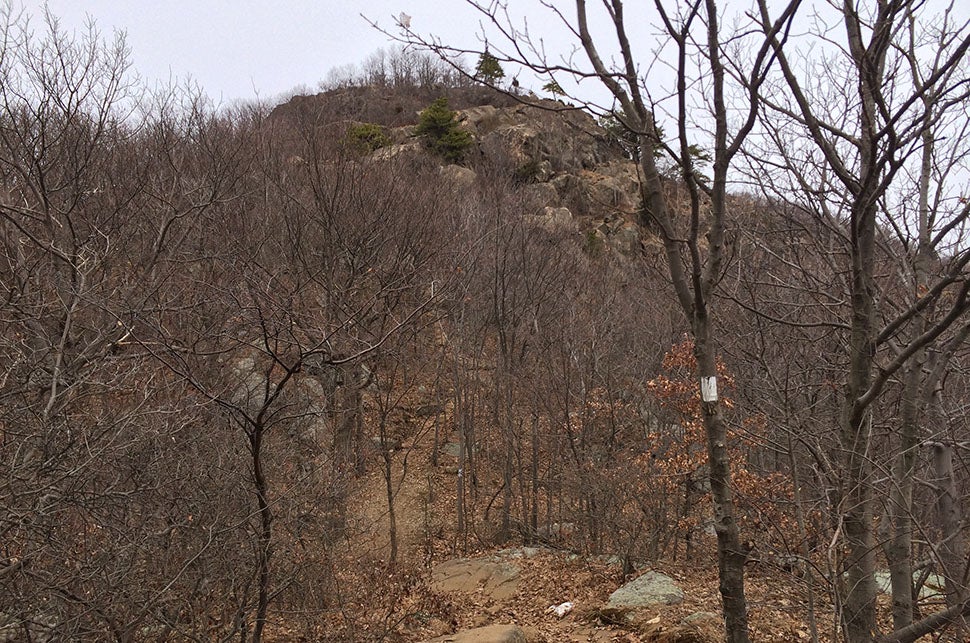 Following the white painted squares — which now appeared on both rocks and tree trunks — and meandering through thickets, across lichen-covered skulls of exposed bedrock, and in and out of the occasional sprawl of other hikers, we experienced a sequence of winter landscapes.

There were frozen marshes, complete with cattails rustling the breeze — 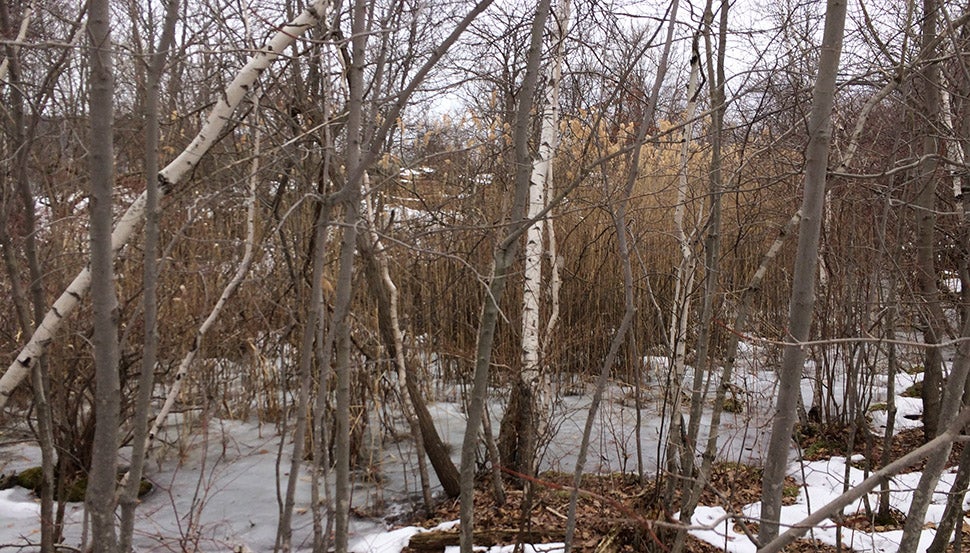 — followed by broad meadows, like something you'd see in the back pastures of a large farm —

— and then we'd disappear again back into deep forest, sometimes hiking alongside or even directly through flowing stream beds, as the winter snow continued to flow down toward the Hudson, now more than a 1,000 vertical feet below us.

At one key point, of course, there was the thankful indicator of an "easier ascent," which I am not ashamed to admit we took.

And there is also a turning point, right before the final two summits or so, where you can head south along something called the Undercliff Trail. This hooks up with another route known as the Brook Trail, which leads back down to Route 9D.

From there, emerging out of the trees directly onto the roadway, you can then head north again up the side of the road until you hit the parking lot (or train station) where you began.

The sign for that turn-off is easy to spot and nailed to a tree.

However, we continued onward, determined to take a longer loop, looking for where the Breakneck Ridge Trail hits the Breakneck Bypass Trail, which, in turn, leads around again toward the Yellow Trail, and then back all the way to Route 9D.

This latter half of the hike was a perfectly manageable, easily ambled hike downhill through the trees; however, this year's seemingly endless winter — a season that has all but annihilated any positive feelings I might have had for the east coast — means that very substantial amounts of ice and snow clogged our pathway down.

This — descending on the Yellow Trail — was where the thick, indestructible Vibram soles of my Red Wings came in the most handy. I could stomp, heel-first down through the snow and ice, only once losing my footing.

I could go on and on, but I won't. A few more highlights:

Breakneck Ridge affords clear aerial views of the eccentric and utterly awesome Bannerman's Castle. I have written about the castle elsewhere, but, to make a long story short, a late-19th century arms dealer named Frank Bannerman built himself a labyrinthine castle on a small island in the Hudson, using actual rifles as rebar in the thick masonry walls. The castle is thus literally made from weapons.

However, over time, the castle has partially sunk below the waterline, resulting in the dreamlike scene of castellated turrets and walls disappearing beneath the waves. The building is more reef than architecture, a half-submerged world of walls and arches. You can see it, as well, in the following Instagram. 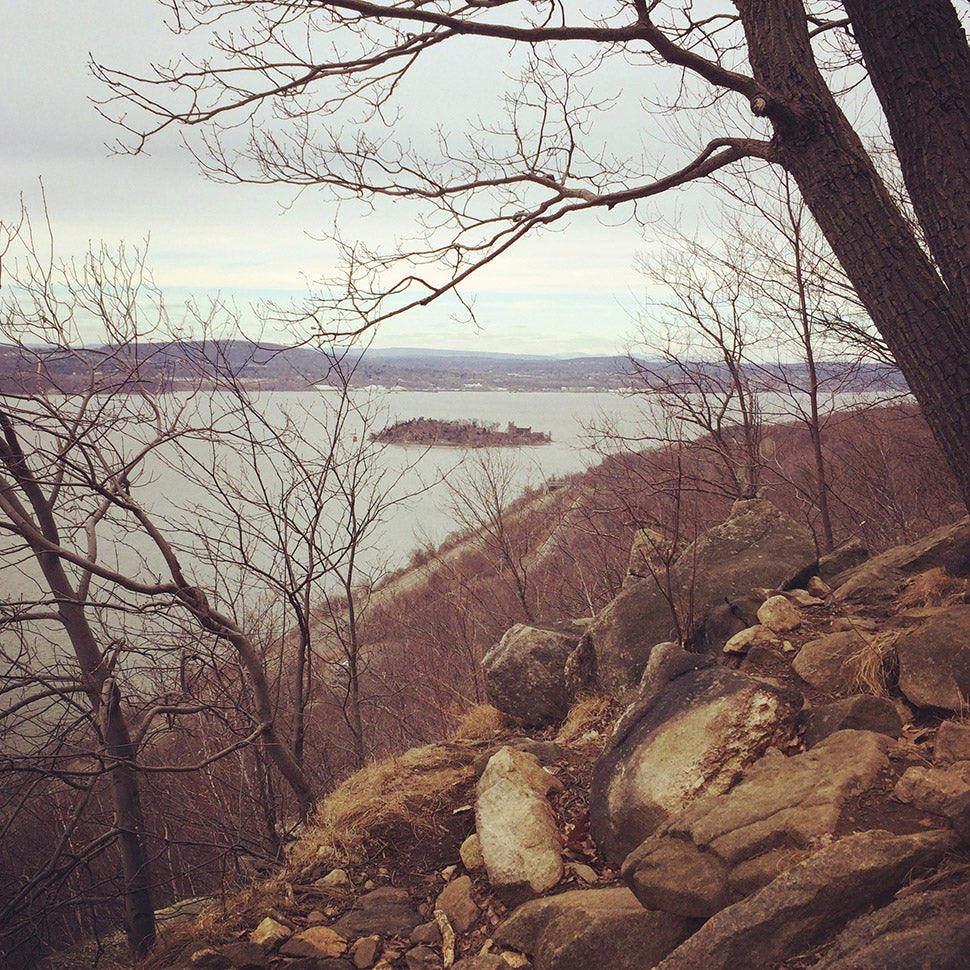 Another highlight here is also a visual one, but it's the awe-inspiring sight of Storm King Mountain across the Hudson. Storm King is a glacially-shaped fist of granitic gneiss pushed up into the swirling winds of the riverscape, a knotted burl of a landform with long freight trains running north and south across its base.

It's also home base for Storm King Art Center, where walking paths and outdoor sculptures can give you a dose of civilisation (should you wish to find more of the very thing you left behind in the city). 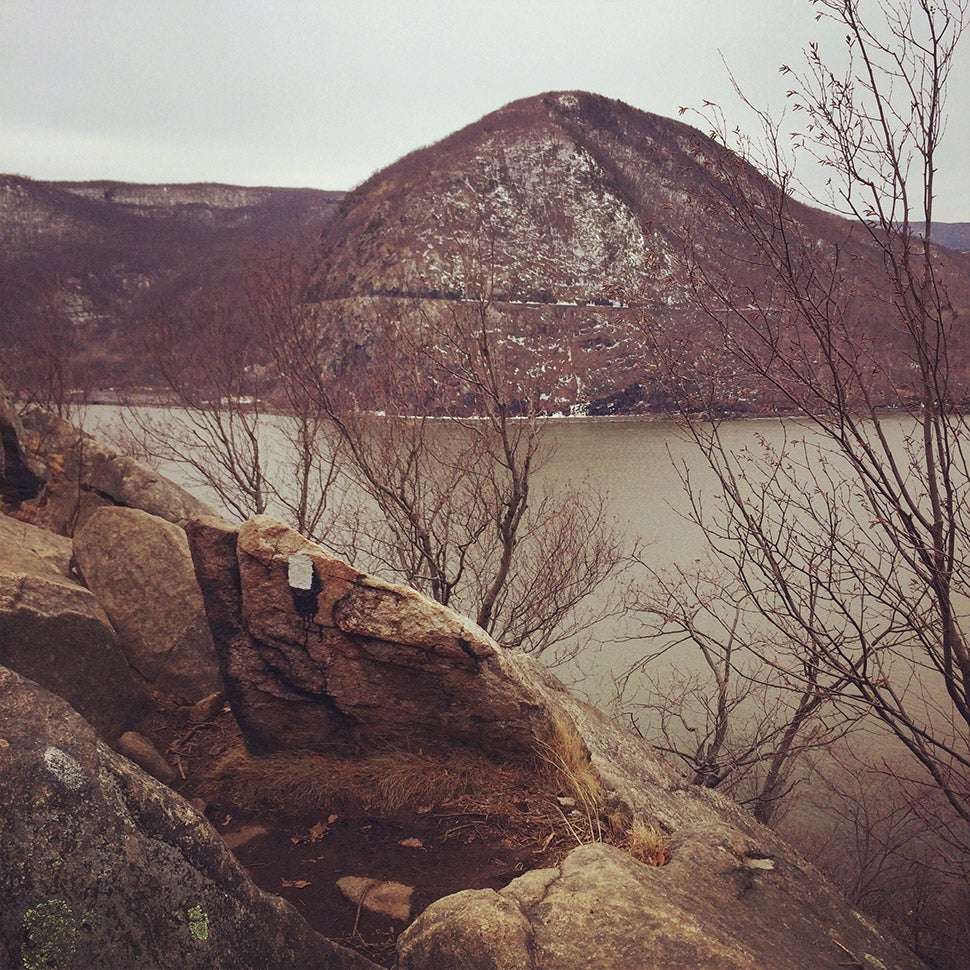 As you can see in the following panoramic iPhone shot, Storm King becomes something of a visual centerpoint for the entire hike (and that's Bannerman's Island, with its slowly sinking castle, off to the right).

Well, now you're exhausted, your feet are wet, and you've just spent roughly three hours — maybe more — scrambling and plodding your way up cliffs and through forests. Luckily, Breakneck Ridge is located right at the midpoint between Beacon and Cold Spring, two well-trafficked towns with great options for eating.

I've already mentioned Storm King Art Center, across the river, but what better way to relax than a stroll through the art-filled halls of Dia:Beacon? Make a bee-line for the Richard Serra room, perhaps after a quick coffee and bite to eat in the cafe.

However, if you're far too pooped for art, consider swinging down through the small town of Cold Spring, where Hudson Hil's serves reliably delicious breakfast and lunch; check out their website for a menu. Then walk the hill of Main Street peering into local craft and antique shops.

Both Cold Spring and Beacon are conveniently serviced by Metro North, meaning that everything described above is accessible even to those of you without access to a car.

Other Day Hikes Near You

It would be impossible to list every possible day hike you can take in the New York area; suffice it to say that there are nearly limitless options for short and creative visits to deeply non-urban landscapes, at all levels of hiking and wilderness skill, for us city-dwellers sick of being stuck inside buildings.

But what about you, whether Chicago, Seattle, San Francisco, or St. Louis? Where do you go for your own quick day breaks and emergency exposure to the elements? A regretfully displaced Angeleno, I miss being able to explore the long and looping elevations of the old fire roads behind Malibu — accessible, for example, from this parking lot. Tell us your own favourites in the comments.