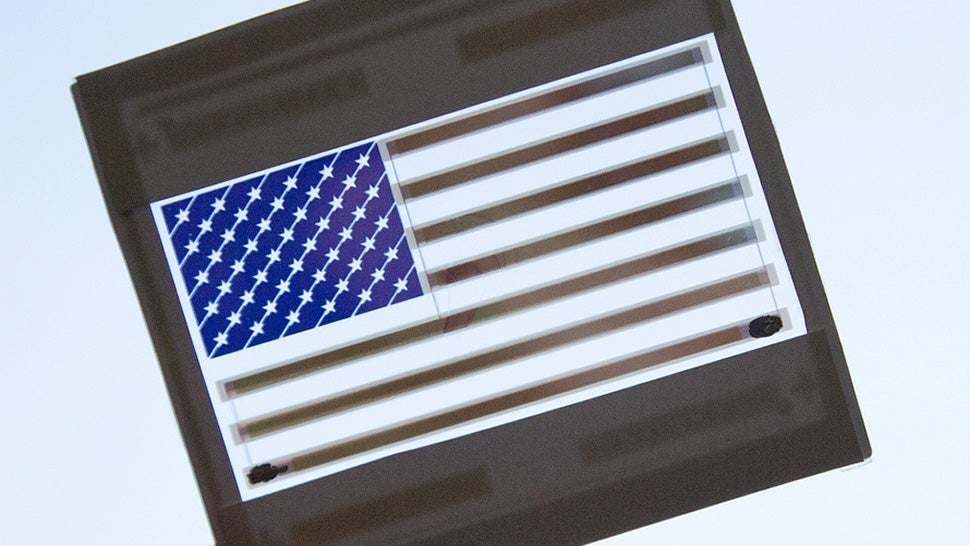 Because solar panels are designed to accumulate as much light from the sun as possible, they’re typically very dark in colour. It makes them more efficient, but also kind of an eyesore, minimising their adoption. So researchers at the University of Michigan have developed what they believe to be the world’s first semi-transparent, coloured solar panels.

After all, solar panels produce energy that’s completely free, but who wants to cover every inch of their home in giant black panels? In the palm-sized American flag pictured above, the tinted stripes and field of blue are all energy-producing solar cells. And were it increased in size to a meter on each side, it would generate enough electricity to power a fluorescent lightbulb.

What’s particularly important about this innovation is that the colours weren’t created by adding dyes or a film that can obscure the light hitting the panels. Instead, the colours are produced by the mechanical structure of the solar cells themselves causing them to reflect different wavelengths depending on the thickness of the semiconductor layer.

But while they certainly look better than your typical solar panel, they’re also less efficient since some of the light is being bounced back to your eyes instead of being absorbed. In the long run, however, if it comes down to someone installing a slightly less efficient solar panel on their home that looks good, instead of not installing one at all, the advantage to this breakthrough becomes clear. [University of Michigan]