Saturn's moon Titan, everyone's favourite Earth-like orbiter, just got a little more Earth-like. That is, if astronomers' latest findings are correct. Based on strange reflections off the surface of Punga Mare, one of Titan's hydrocarbon lakes, they think they have found liquid waves on the moon.

If confirmed, this would be the first time we've discovered liquid waves on a celestial body other than Earth. They would not, however, be waves of liquid water, since Titan's lakes are made up of methane and ethane.

They're not big waves, either. Planetary scientist Jason Barnes revealed his findings at the Lunar and Planetary Science Conference in Texas and explained that images of Titan's north pole taken by the Cassini probe show irregularities in reflections that are consistent with waves. (See below.) It would take a wind speed of about 0.75 meters per second to produce the effect, thought that's only strong enough to produce waves that are about two centimeters high. "Don't make your surfing vacation reservations for Titan just yet," Barnes joked. 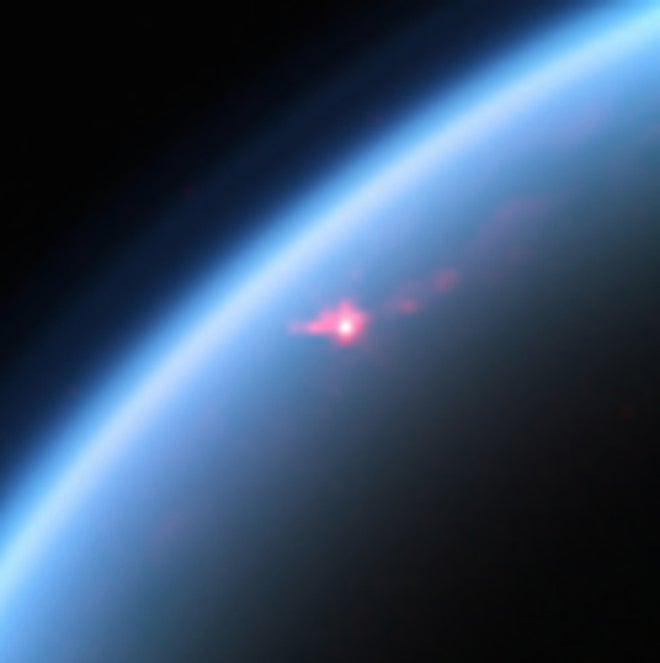 Not all of Titan's lakes necessarily share the phenomenon. Other Cassini images show that the surface Titan's second largest lake, Ligeia Mare, has an almost mirror-like smoothness suggesting that there's almost no wind. Radar measurements taken of Ligeia Mare showed the surface to be completely still, meaning that if waves did exist on this lake, they'd be less than a millimetre tall.

Nevertheless, the development is intriguing, mostly because it can teach us more about Earth's early evolution. Scientists have long viewed Titan as a body similar to a young Earth, and the more they learn about the moon, the truer this seems. [The Wire, PhysOrg]