Why Architects Are Competing To Reconstruct A Building From 1851 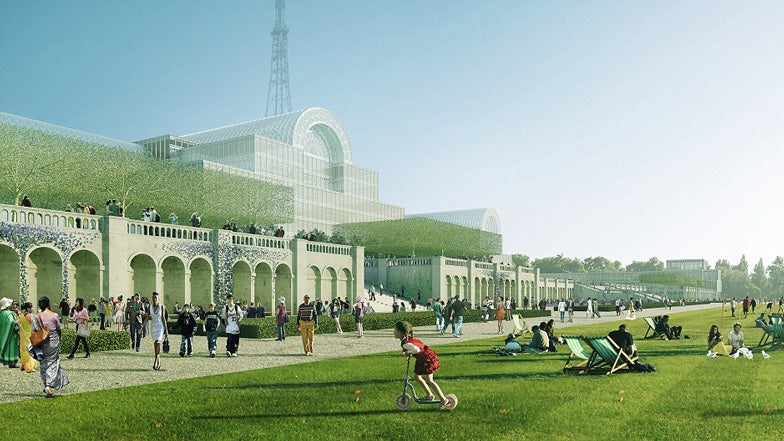 In London this year, six well-known architects will jockey for a chance to build a large public building. Sounds pretty unremarkable, right? Except that the structure was already designed and finished — more than 150 years ago. Now, a Chinese property developer is holding a design competition to recreate it.


The building in question is the Crystal Palace — the elegant but hulking structure that was designed to house the 1851 Great Exhibition. It’s been remade in different iterations several times — once in England, once in New York, and once even in Dallas. But now, the palace is coming home to London. The Chinese developer behind the plan, Zhongrong Group, is putting up more than $US800 million to rebuild the structure on its original site. 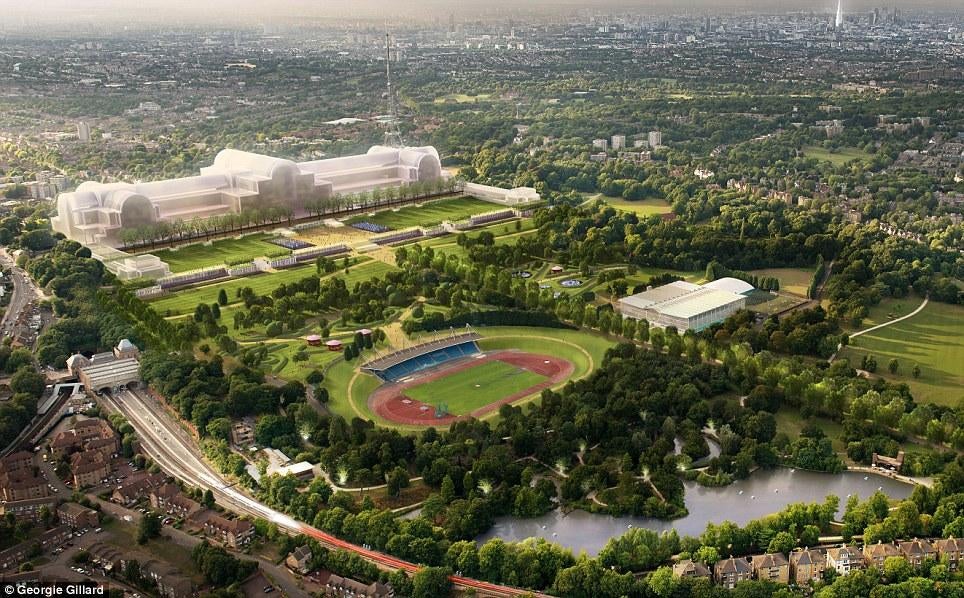 This week, it announced a shortlist of six architects who will submit designs to do it. The list includes Zaha Hadid and Anish Kapoor, Nicholas Grimshaw, David Chipperfield, Marks Barfield, Rogers Stirk Harbour & Partners, and Hawthorn Tompkins — names responsible for some of London’s most notable new structures, like the Millennium Dome, the Olympic Aquatic Center, and the Royal Court Theatre.

So, why even bother? Well, to architects and historians, the Crystal Palace is big deal. A really big deal. It was the building that, in some ways, foreshadowed modern architecture. It looks ornate and decorative, but this was a structure based on cold, calculated functionality. The whole thing was organised around the largest pane of glass available at that time — itself nothing short of a technological wonder — which defined the proportions and layout of the building. 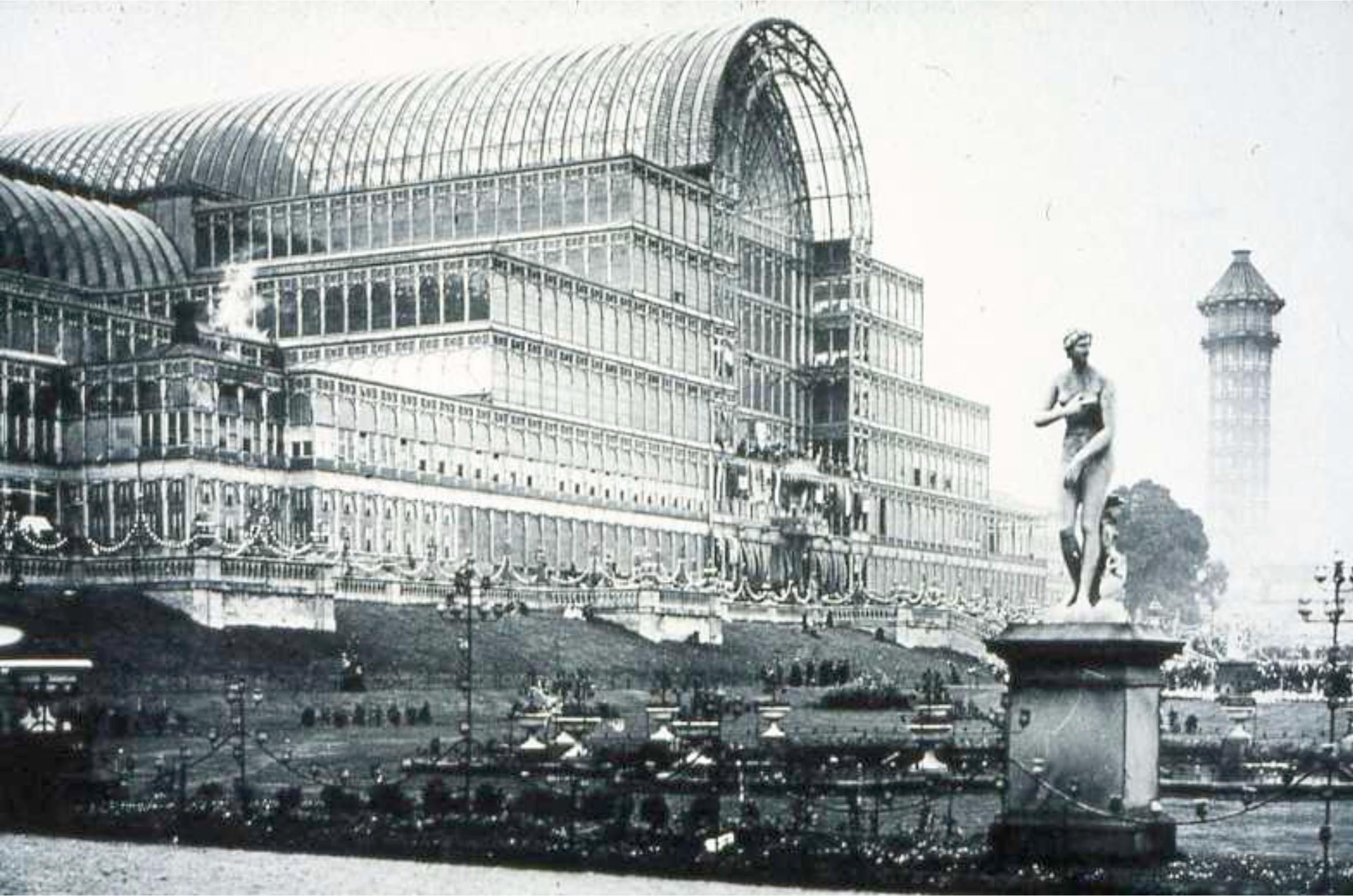 The steel framework that held these glass panes was modular and prefabricated — words pretty much unknown in 1853. Each module arrived at the site of the palace pre-made, and only needed to be screwed into place. The whole thing was built in record time, and became the largest prefab structure ever built. It was a blueprint for the next 150 years of architecture — a super-light, super-cheap steel skeleton built to house the latest technological marvels of the day.

You know the morbid phenomenon in which an artist or musician’s premature death bolsters the public’s appreciation of their work? It’s true for architecture, too. After the original Crystal Palace was relocated in 1854, it burned down in 1926 — and the memorializing began. 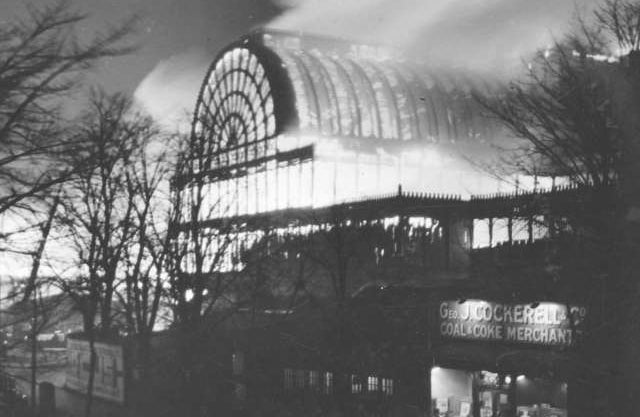 The Crystal Palace is now the building that kicks off many textbooks on architectural history. It’s the subject of huge amounts of writing. There’s even a replica, in Dallas, called the InfoMart — it sits next to one of the city’s major highways, a gleaming tribute to a structure built before Dallas was even on the map: 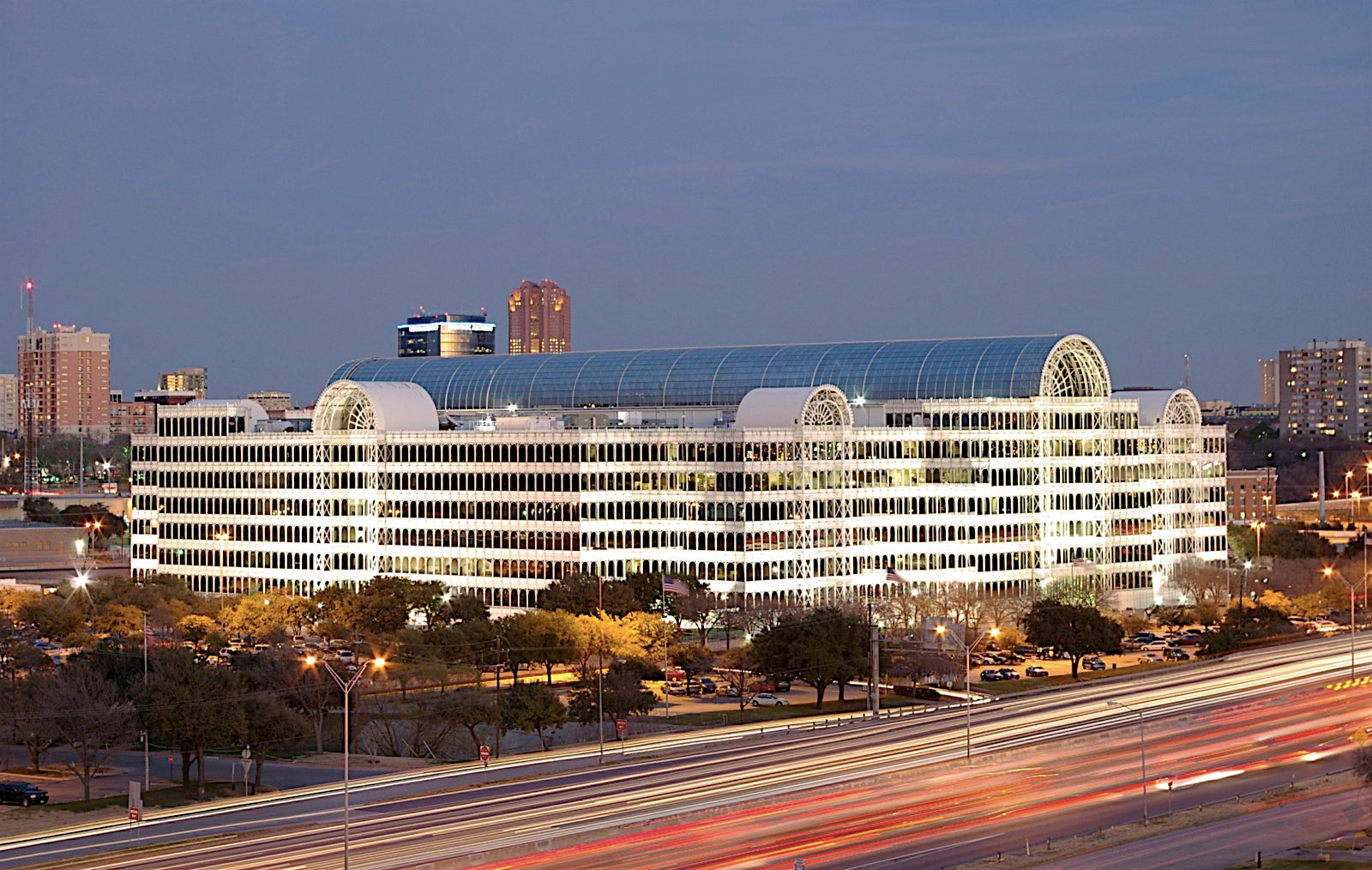 So, why not ask architects to create something entirely new? Why does it have to be a replica? After all, as Sam Jacob recently argued, isn’t this just another example of architects raising the dead for lack of a better idea — the architectural equivalent of Hollywood’s obsession with remaking classic movies?

Well, that’s the complicated part. In 1990, an Act of Parliament stipulated that any building constructed on the site must be designed “in the spirit of Paxton’s original building.” That means that any new structure on the site of the old Crystal Palace has to conform to those very ambiguous words. As Colander explains, the competition will ask the architects to “reconstruct the Crystal Palace in a way that is faithful to the spirit of the original, in all its ingenuity, scale and magnificence, to create an internationally recognised landmark building.” The design guidelines require “a permanent structure with a similar footprint to the original” with “a translucent and delicate structure, as was the original.”

That’s an incredibly vague brief. So while the public — and the Zhongrong Group — might imagine an exact reconstruction of the original building, you can bet that’s not what all of the architects are going to deliver. And that’s a good thing. Imagine if David Chipperfield designed a sparse, white simulacrum of Paxton’s original design, akin to his America’s Cup Building, in Valencia: 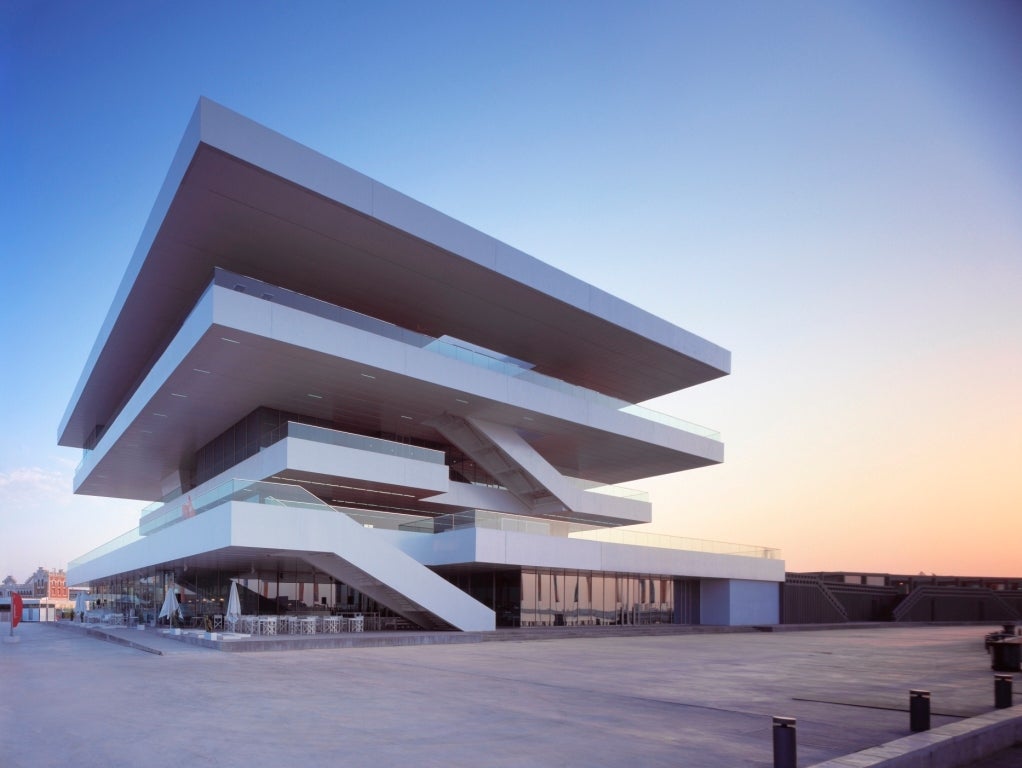 Or if Anish Kapoor filled the replica with a massive architectural bladder, as he did with Paris’s Grand Palais: 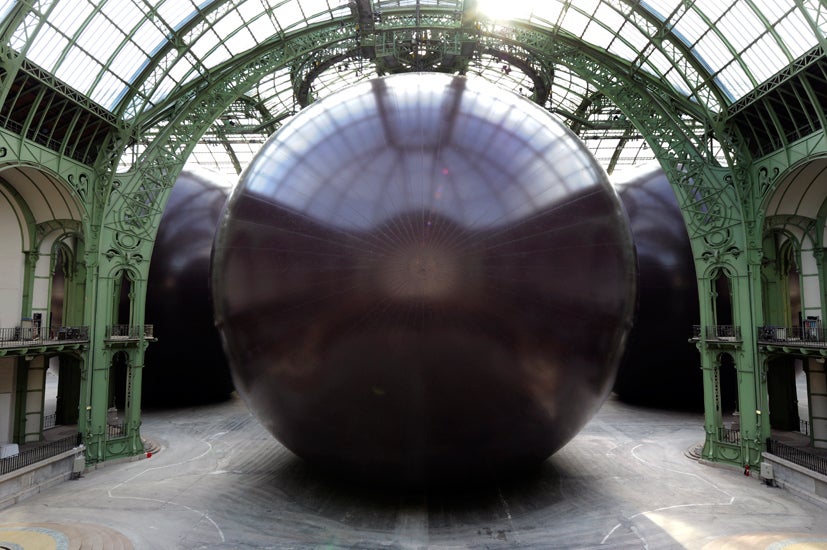 Yet the architects will need to walk a fine line between tribute and experimentation if they want to win. Just look at the rendering that Zhongrong Group released with the competition announcement: 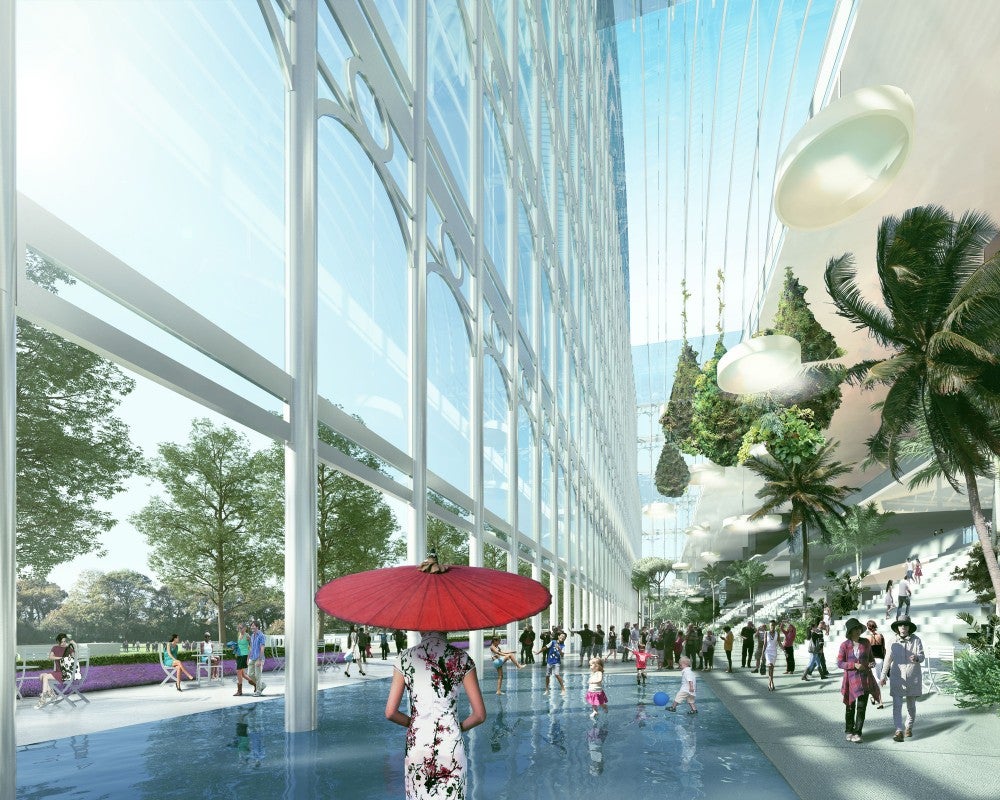 It’s practically a 1:1 recreation of the Crystal Palace.