What The Secret Symbols In Victorian Architecture Really Mean 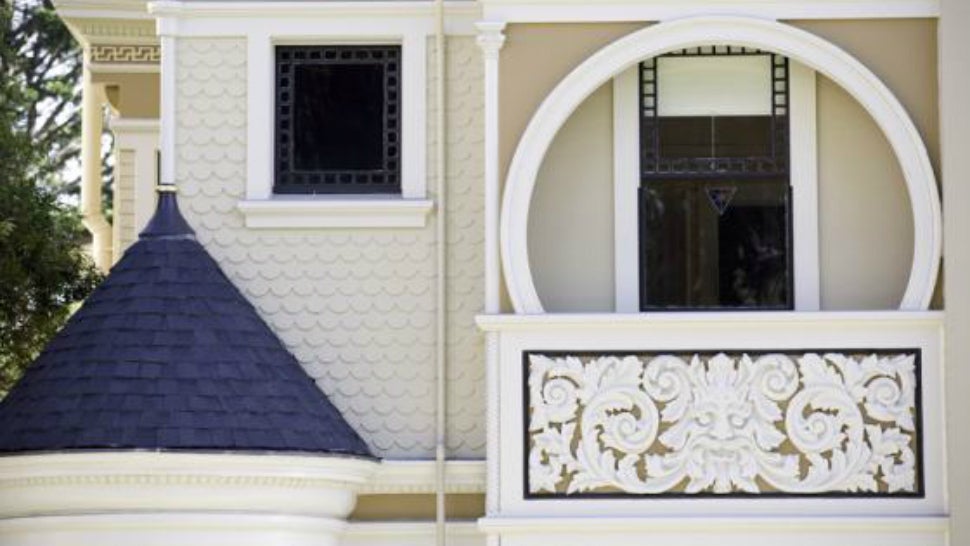 San Francisco’s iconic Victorian style homes, such as the Painted Ladies of Full House fame, weren’t built merely as protection against the elements. Like 19th century Klout Scores, these houses were just as much status symbols as they were domiciles. But what do their ornate facades actually mean? 7×7’s Mary Jo Bowling explains.


Early San Francisco residents didn’t have Instagram and Facebook, but it turns out that presenting ourselves to the world as we wish to be (known today as “insta-shaming”) is an age-old practice. But in the Victorian era, people posted in a more personal and enduring way: They updated their status by building it onto their homes. The motifs that they included on their houses spoke of their social standing, their net worth, and even their superstitions.

The people who built these houses are long gone, but the hopes and dreams they projected live on, still visible but usually not understood by modern passersby. We contacted Caitlin Harvey, architectural historian and owner of Left Coast Architectural History, to help decode what the San Franciscans of yesteryear wanted the world to know.

Harvey, who consults with architects, real estate agents, and homeowners, first led us to the stately homes that surround Lafayette Park in Pacific Heights. “Many of the motifs were about status or showing wealth,” she says. “These people were new to the state or the country, and they were trying to present themselves as the new American aristocracy.” 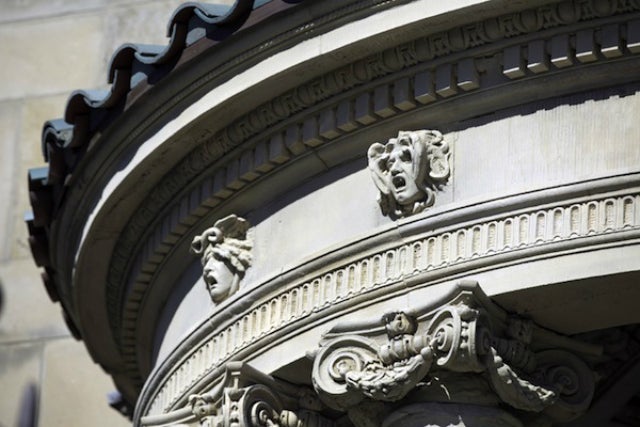 Look closely at the entrance of this stately home, and you’ll be shocked to see a series of stone faces whose expressions range from seemingly troubled to outright snarling. What, at first glance, looks like hair bows are actually snakes, identifying the disturbing visages as Medusa and her Gorgon sisters. The home, styled after a Roman villa, was built for George W. Gibbs, a top producer of iron and steel on the West Coast. According to San Francisco Landmarks, it was designed by Willis Polk to rival the dwellings of Gibbs’ contemporaries back East. The architect commissioned sculptor Douglas Tilden, a Berkeley native whose work made him world famous, to craft the images. “Medusa heads were a symbol that averted evil — the Greek hero Perseus put Medusa’s head on his shield after killing her, and was able to defeat his enemies because they were turned to stone when they looked at her,” says Harvey. “Based on this myth, Medusa or Gorgon heads were often placed on doors or gates to repel evil or enemies. It is also a strong classical reference to great ancient Greek architecture, as Medusa appeared on a number of iconic temples.” 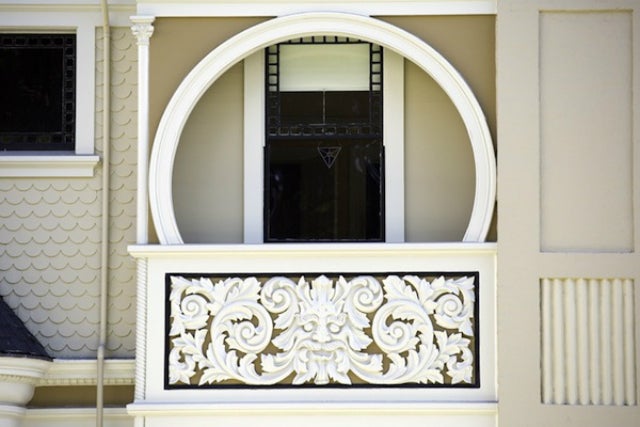 Across the street from the park, on the side of the C.A. Belden house — a grand Queen Anne home that holds a place on the National Register of Historic Places — an oversize Green Man has been looking over the hill that is now Lafayette Park for 125 years. He’s the largest example of his type that Harvey has ever seen. “It was likely meant to evoke the Victorians’ love of nature and flora, as well as reference to medieval England, a romanticized period that meant antiquity, tradition, and deep roots in the Old Country,” Harvey says.

She notes that many newly wealthy Americans liked to evoke gothic and classical themes in architecture to add an air of respectability and aristocracy to their families. (The home was built in 1889 by Charles A. Belden, the treasurer of a company that imported stoves and metals.) 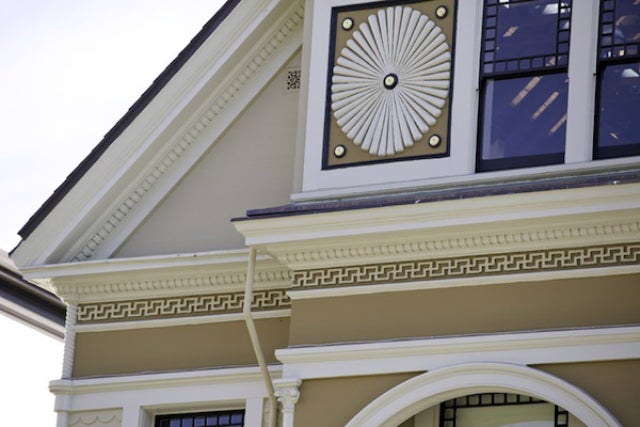 The large sunbursts that flank the upper windows could be reflecting a love of England, or perhaps they were a commentary of the times. “The sunburst was a popular motif in the late 1800s,” says Harvey. “People who lived during that time considered it a golden age — there was a lot of optimism and many people were doing well financially. But some historians think they represent the British Empire, and the notion that the sun never set on the British Empire.” She notes that, on some houses, the sunburst appears as a setting sun, which could be interrupted as a comment on the waning power and influence of England. 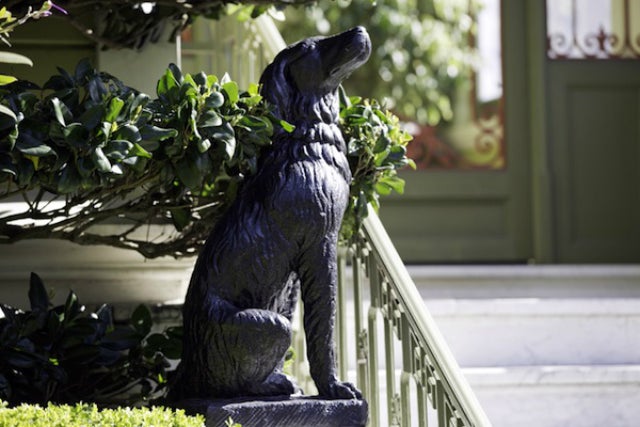 Nearby the Belden house stands an elaborate Victorian that has a constant canine companion thanks to the iron dog sculpture out front. Although Harvey doubts the sculpture is as old as the house, she says that dogs were symbols of loyalty. She notes that this metal hound appears to be looking up adoringly at an invisible master. 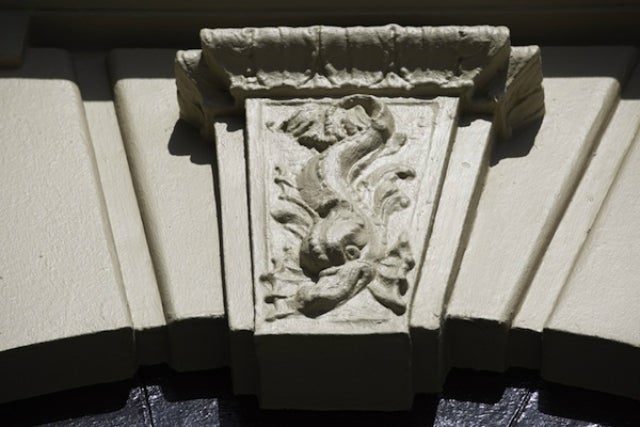 A lot of San Francisco buildings feature highly stylised dolphins. Harvey says architectural historians consider the mammal to symbolise swiftness, charity, diligence, and love — but she thinks it is popular in SF because of our coastal location. “Do you see how the dolphins are located low, close to the street level?” she says as she points at the marine imagery. “When these buildings were constructed, it was very much a pedestrian society. A lot of the ornamentation is placed low, so you can see it from the street.” 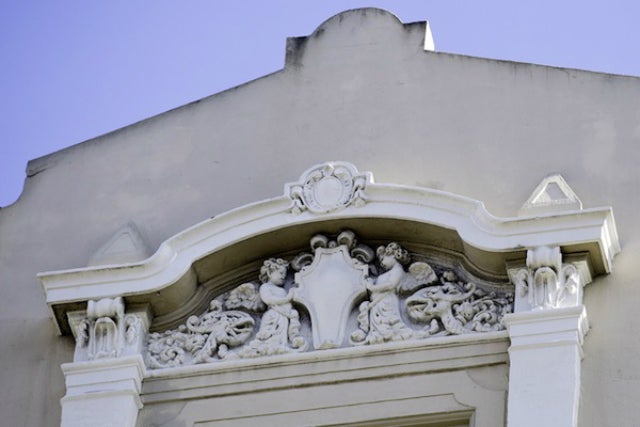 Look closely at the 1920s era Mediterranean-style homes in SF, and you will see that cupid-like cherubs flutter year round in architectural ornamentation. Harvey says that, much like today, they represent love and fertility. 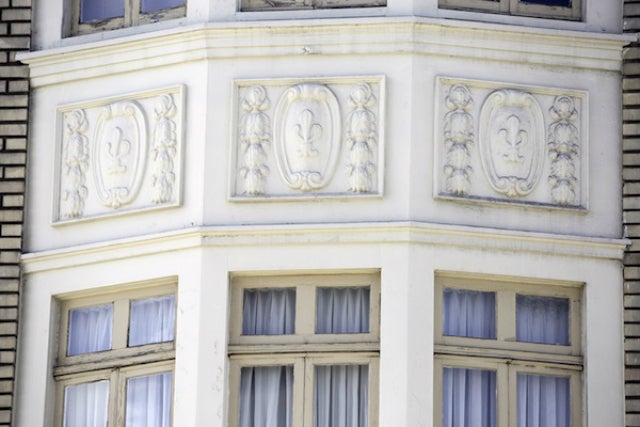 Many older homes have baronial crests — although it is doubtful the original residents had any ancestral claim to them. With no family tradition, many bourgeois cobbled their own together. In this case, the fleur-de-lis in the center of this crest could represent wealth, prosperity, or the Christian trinity. “Basically, people wanted to look classy,” Harvey says. 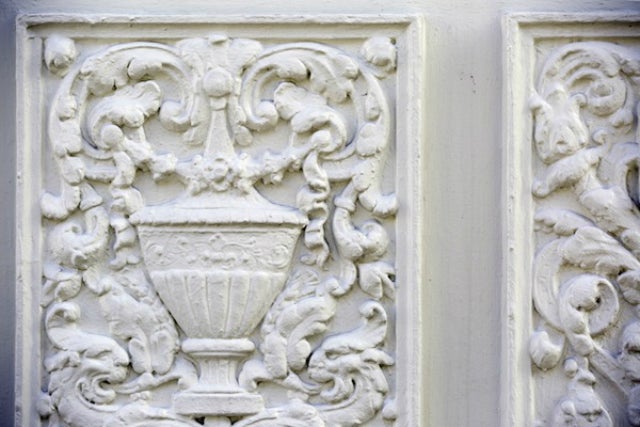 The vessels that adorn many SF buildings are images of funerary urns that were used to store ashes. According to Harvey, they are symbols of the Victorian fascination with death and immortality. 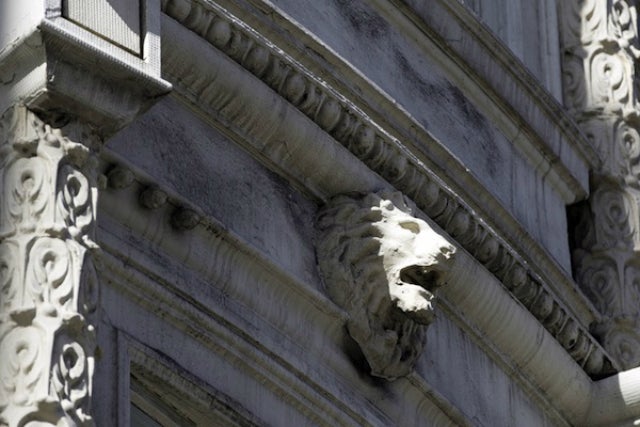 Lions have long been a symbol of royalty and nobility, an image many of the newly minted American upper class was eager to adopt. But the expressions on the lion’s faces say a lot. “If they are roaring, they are seen as a symbol of power, prestige, or courage,” Harvey says. 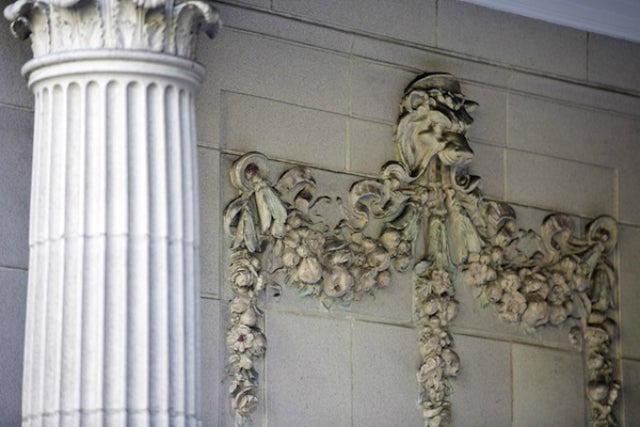 Harvey says this lion, shown gripping garlands of flowers and fruit in his teeth, has a more benevolent meaning: nobility and prosperity. “Fruits of all kinds were considered proof of God’s goodness,” Harvey says. 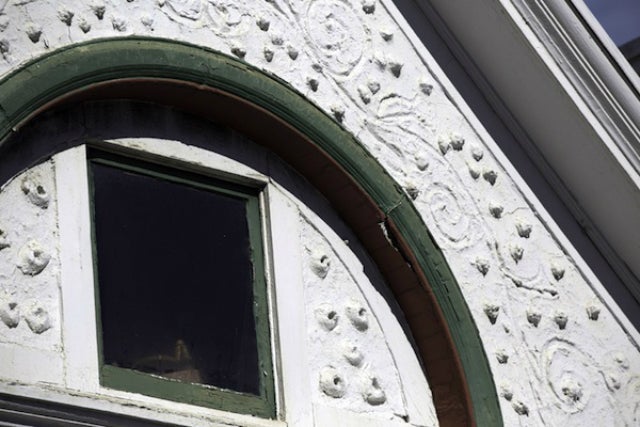 The misshapen lumps with holes in the center that grace the gables of some Victorians in the city almost look like a mistake or an ill-advised remodel. They are actually faux swallows’ nests and have a very purposeful meaning. Harvey says they represent hope, rebirth, and return (swallows are migratory birds that return to their cliff-side nests year after year). She also notes that there is a possible correlation to dovecotes — freestanding birdhouses found around many early homes. 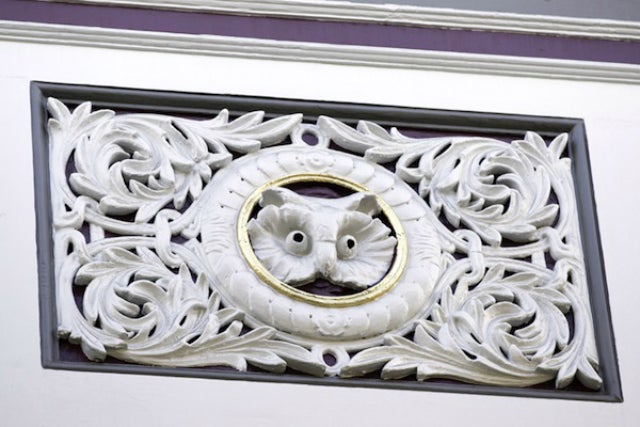 This owl gazes down from a Victorian in Cole Valley. Harvey says its meaning is as clear today as it was in early SF: Wisdom, intelligence, protection, and vigilance.

Harvey notes that larger and more costly homes had more custom details, while most middle class homes ordered ornamentation from a catalogue or pattern book. “But even if they selected from a book, they probably made choices that were meaningful to them,” she says.

Did the people of that day mock homeowners, as many people today make fun of bragging or narcissistic social media posts? “I think there were a fair amount of people who made fun of the upper classes or resented what they put on their homes,” she says. “But they didn’t have a Facebook account to do it on, so it was probably a more quiet thing.”