Watch This Endless Ship Crawling By Like An Imperial Star Destroyer 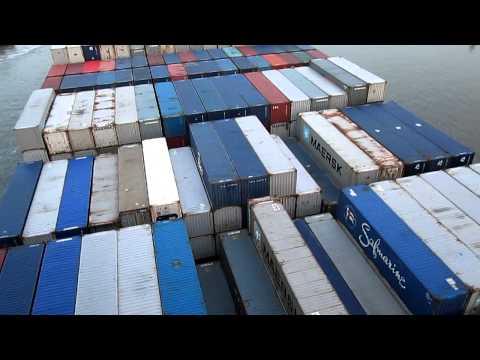 However, despite the impressive display, the 93496-ton S-Class cargo ship Arnold Maersk is not the largest cargo ship in the world. She is just 352 metres x 42 metres — way longer than a standard city block in Manhattan, which is 274 metres x 80 metres, but still not a Triple E class vessel. Still, it’s goddamn impressive from this perspective, standing on the Bayonne Bridge, in Staten Island, New York.

The Arnold Maersk has a deadweight tonnage of 109,000 tons, that’s how much cargo, fuel, water, ballast, provisions and crew she can carry safely. Or not so safely. This is what happened to her last year, in November 2013, after very large waves smashed her stern during storm outside Dutch Harbor, Alaska: