This Giant Superdesk Is Bigger Than Your Average Suburban Home 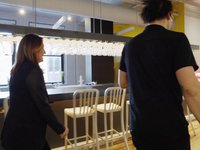 An endless table is exactly what it sounds like: One giant, continuous superdesk that wraps itself around the entire office and accommodates all 125 of the Barbarian Group’s employees. It’s 335m long and 408sqm in total. It also includes seven archways, which lead the way to conference rooms and provide cosy nooks for meetings. It also cost $US300,000, although the Barbarian Group says that’s still cheaper that it would’ve been to outfit the office with cubicles.

Believe it or not, this is the second superdesk Wilkinson has designed. In 2004, he built a similar structure for Mother, an ad agency in London. The inspiration was actually the race track that Fiat has on the roof of its factory in Turin.

But the design of these superdesks also borrows from another sport: “It’s made like a surfboard out of plywood, with a top of medium-density fiberboard,” Wilkinson, who’s also designed offices for Google, told The New York Times.

Of course, the only thing these ad agency employees will be surfing with this superdesk is the internet. I’ll see myself out. [NYT, Digg]