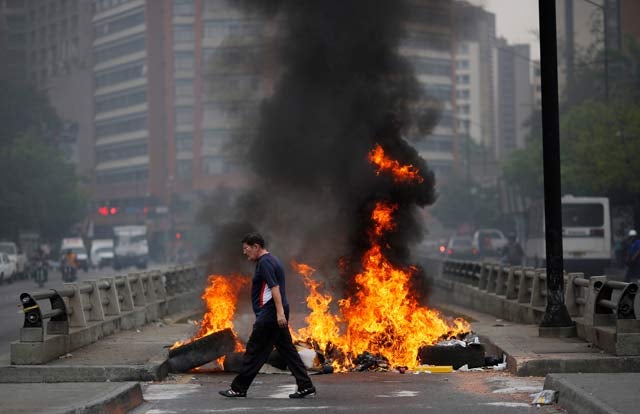 Zello is a walkie-talkie app made by a small company based in Austin, Texas — but if you’ve heard of it, it’s probably because you’ve been following the news in Venezuela or Ukraine. Some of its biggest users are protesters taking to the streets. The app’s creators hadn’t planned on getting involved in political revolutions, so you could say this is one hell of a pivot.

CEO Bill Moore tells Defence One he never imagined Zello would become a force in the politics of countries thousands of miles away. The company has no direct stake in the protests, but it can’t help but get pulled in where its user base as grown. It’s gotten 600,000 downloads in Venezuela in the past few days alone, and it became the number one app in Ukraine and Turkey during the height of their protests.

When Venezuela’s government effectively blocked the app throughout the country last week, Zello’s engineers pulled an all-nighter to get out a new version that circumvents the block.

Android users in Venezuela, who cannot access the app. Please try this version and report back results http://t.co/e5XZKYusOw

Although Zello is described as a walkie-talkie app, its channels can be as private as two people or as public as 450,000, the size of the largest channel in Venezuela. In effect, as Defence One points out, it’s kind of like a radio, microphone, and conference call all rolled into one. That offers a lot of flexibility to organisers looking to communicate. Lack of security in the public channels, however, has led some organisers to move away from it.

By now, it’s no longer news that big social media networks like Twitter and Facebook have played a role in getting the word out for protests around the globe. (Images from Twitter have also been blocked in Venezuela.) How big a role they’ve really played is something still being debated.

But, either way, for companies as big as Google or as small as Zello that have amassed international audiences, business decisions abroad inevitably become political ones too. Those who control the flow of information can wield a lot of power — that’s true for governments and it’s true for social networking platforms, as well. [Defense One]