Paper Review: This Could Be Your Only Facebook App…Someday 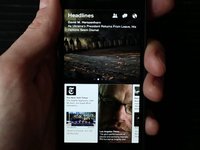 Facebook’s Paper may not be a total Facebook replacement yet. But it does have the potential to change the way you interact with Facebook as a whole. In other words, it’s everything that Facebook Home wasn’t. And that’s a great thing.


AU Editor’s Note: Paper hasn’t come to Australia just yet. It’s US-only, and iOS-only. For now. Facebook will likely do a broader roll-out later on in the year.

Facebook’s new, standalone app that places your timeline and everything in it alongside sets of carefully curated news articles. It’s a design-centric, highly intuitive reader that makes your friend’s mindless status updates look just as beautiful as the professional think piece lying just a single swipe away.

If Facebook Home was Facebook’s failed attempt at forcing its way to the centre of your mobile life, Paper is the realisation of everything Home couldn’t be.

The main Facebook app serves as a purely egocentric source of information for most people. You go there to see what your friends from college are up to, whether anyone cared enough to give you a poke, if any pictures need de-tagging, etc. If you happen to run across a tantalising article from a third-party website in the process, so be it. You’ll click, but hardly anyone goes to Facebook to get caught up on world news. That’s what Twitter’s for.

Paper shifts that emphasis. When you open it, you’ll get caught up on your timeline, yes, but you’ll also get to check out what’s happening in the general categories you and your friends care about most. Because Facebook isn’t the one curating the content; it’s all populated with the most popular stories on Facebook. If people like it, you will see it. Simple.

Paper is being likened to Flipboard for good reason; Paper looks an awful lot like Flipboard. Stories are presented within broad categories, and each comes on its own card that zooms and folds in a way almost identical to the design-focused reader that’s graced iPads for years. The difference here, though, is that you can only control general topic areas (Tech), not the sources they pull from (Gizmodo).

Each category exists on its own screen, and you can switch among them by swiping left and right. Although you’re prompted to choose your favourite topics (headlines, technology, flavour, pop life, creators, etc.) upon first downloading the app, you can add and take away these screen as you so please. Your regular timeline action will appear under a separate Facebook section, which is given equal weight to news sources; the only difference is that you can’t get rid of it.

And that’s as much control as you’ll ever get over what Paper shows you.
Once you’re all set up, each screen is divided into two halves: A larger photo showing the most popular stories on top, and the series of cards offering previews of individual articles and photos below. The stories you’re seeing are (presumably) picked according to how many shares, likes, etc. each is getting within Facebook.

While it seems like you’re scrolling through a separate reader, you’re still very much operating within Facebook’s jurisdiction. Any story you click on functions just like it would on normal Facebook; you can check out the comments on the posted article, like it, share it with your friends, or click through to the site itself and read the piece in full. It’s your same Facebook newsfeed, but here, all that precious content comes front and center with Facebook’s other functions becoming an after thought — if even that much.

This thing is beautiful. It’s easy to use and, most surprisingly, it works. There’s no pull-to-refresh; you don’t need it. New cards fly into line as soon as they’re posted, and you don’t have to lift a finger. Plus, it really does make your timeline something actually enjoyable to behold, Facebook’s prime challenge since its inception. Facebook is fun again. Maybe that’s just the novelty of the new design, but it’s more than we’ve been able to say about any of Facebook’s (often failed) attempts at standalone apps yet.

If this is really meant to change the way you use Facebook, Paper in its current form had better be just a taste. As it stands now, there’s no ability to manage and edit your friend lists, events, or groups. And let’s face it, the convenience of events and groups is a lot of what’s kept Facebook a necessity for most of its users. There’s just no other network that lets you have that kind of access to almost everyone you know en masse. And Paper totally discounts that.

Granted, the app is only in its first iteration, and there is ample room for growth. Plus, it makes sense that Facebook would want its user base to get acquainted with the wildly new way of consuming posts before flooding it with the boatloads of other features that make Facebook what it is.

If you have the space (and an iPhone in the US), why not — its free! Will it be a fleeting novelty that you slowly forget about as you continue using the older yet more functional Facebook app? Maybe. But if Facebook starting piling its many features onto Paper — as we hope it will — you might finally be able to kiss the Facebook as we know it goodbye once and for all in favour of the much prettier Paper. [iTunes]