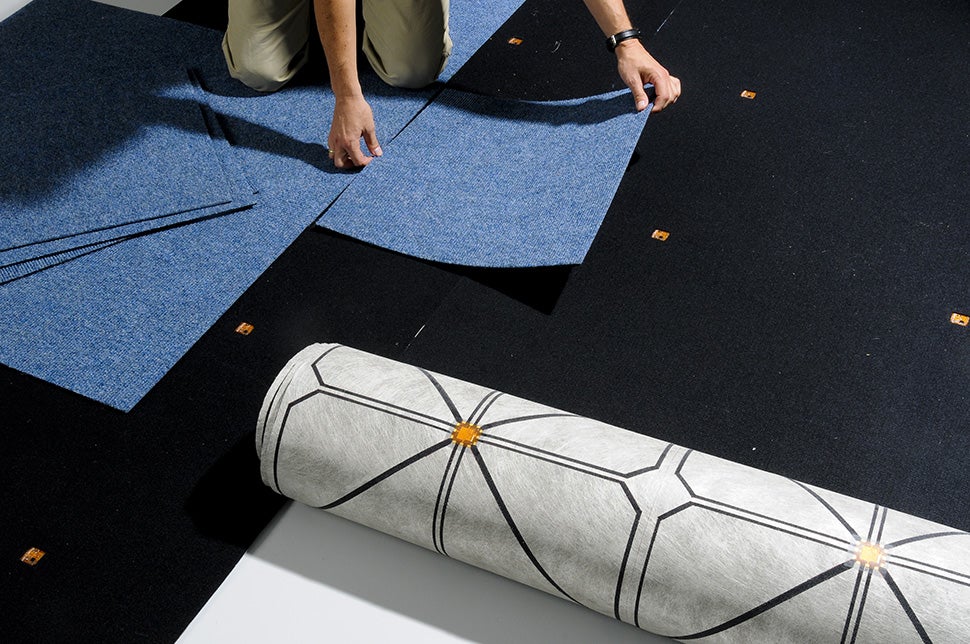 Growing older comes with a few nice things. Knowledge evolves into wisdom. Context informs perspective. A long life’s ups and downs are woven into a rich tapestry of memories. But it also comes with a number of consequences that almost everyone would just as soon avoid. Footing becomes unsure. Bones grow fragile. A task as simple as rising from bed or navigating a room becomes fraught with danger when a fall could mean a broken hip or being unable to get up again.


Such a fall is among the great fears of caretakers, whether it’s a relative or a nursing home. What if no one is home when the accident happens? How will a nurse know if the injured person has tumbled to the ground on the far side of the bed?

A German startup is offering a high-tech monitoring system for this problem, which is set to grow more urgent as the developed world begins dealing with a spike in senior citizens. The company has developed an advanced, conductive textile floor covering they call SensFloor that detects when people are walking or lying on it. The innovation is already alerting European nursing homes when a senior has fallen. 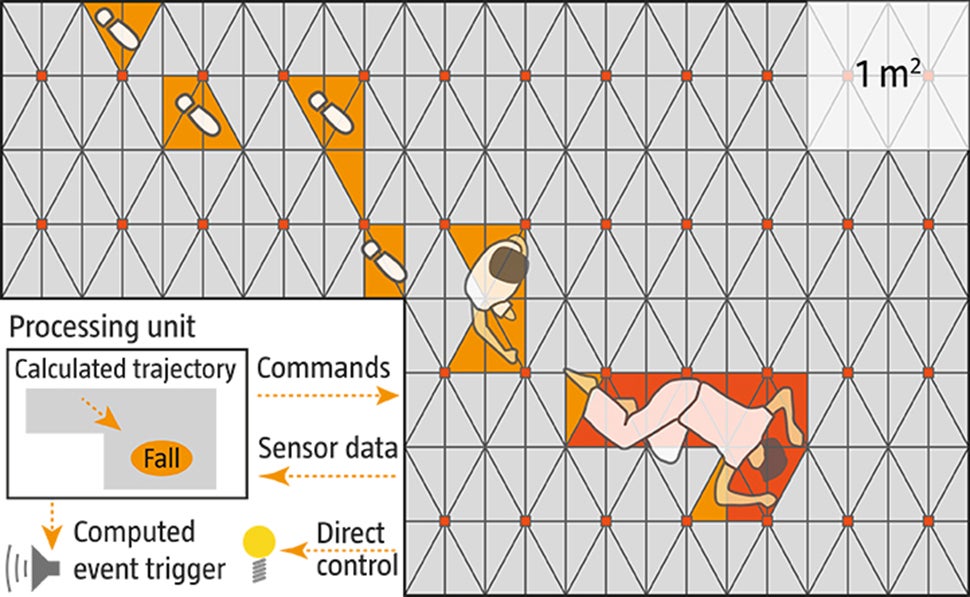 “The floor is the best place to discover what a person is doing,” says Axel Steinhage, research and development director of Future-Shape. “Except when you’re sleeping, you’re always in contact with this surface called the floor. I feel it’s strange that people don’t use this surface for more sensor information input.”

Their flooring is a polyester fleece textile measuring just 2mm in thickness. They use an ordinary textile production process to laminate a thin, conductive piece of metal into the fleece to make patterns like those found on circuit boards. Some parts of the pattern become sensor fields and others become conductive lanes. These are connected to embedded radio modules that communicate real-time data to the system’s cigarette-box-sized controller.

These whole-floor sensors measure capacitance, changes to the local electric field caused by a person or any other conductive object coming near them. It’s the same phenomenon your touchscreen device uses to tell where your finger is tapping. “When I come toward the floor sensors, the electric field rises and sensors can detect it,” says Steinhage. “The sensor then puts out a message saying something is nearby.” 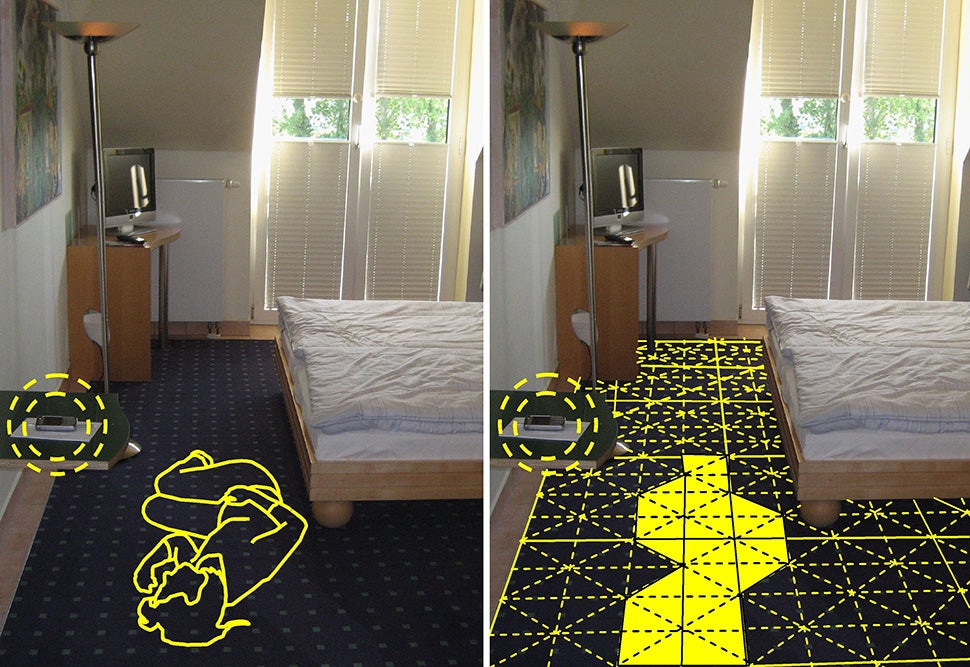 Based on the area of the disturbance to the electric field, the sensors and the wireless controller can tell if a person is standing on the floor or lying on it. It can also detect the direction and velocity of movement across the floor. Because the device doesn’t work on physical contact, it can be laid under regular flooring like carpet, tile or wood.

It can also tell the number, location and movement of several people, including those in wheelchairs. Because water is a conductor, it can monitor for liquid spills, and can be tasked to control lights and automatic doors when a person draws near. These capabilities, Steinhage says, mean the system could also be used for home and business security or to analyse how long a customer stands in front of a display, signaling the goods that most attract attention in stores.

He presented the company’s work refining how the system analyses capacitance data at this month’s meeting of the American Association for the Advancement of Science.

“The floor knows where the person is and that he’s not in his bed. We can exactly tell about the situation in the room,” he says. “Wherever the person is, the sensor detects the increase in capacitance. In essence, the whole room becomes a touchscreen.” 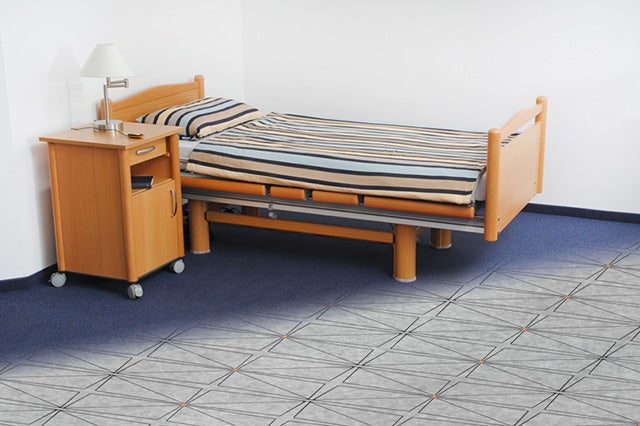 SensFloor is an expensive investment, though the company asks that the technology be considered, and compared to, a home automation system rather than flooring. The price stands at around $US270 for every square metre, which means an average apartment costs around $US27,000 for full coverage. Steinhage estimates that if they scale their production up to higher volumes of the textile, they could get the price down to around $US68 for every square metre.

Future-Shape argues that SensFloor is a better alternative to motion sensors because people move in their sleep enough to require very sensitive detectors. Also, such monitors must keep lights on beyond when they no longer detect motion because a person might just be standing still. And not many people are interested in being monitored by video cameras, especially in the bathroom where many falls occur, even if such devices are automated and running image-processing algorithms. 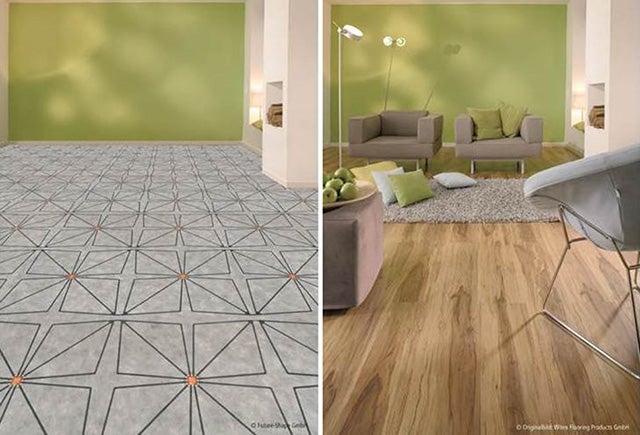 So far, the system has been installed in 20 facilities, research institutes and homes in European countries. The latest, laid down in 2012 to cover almost 1300sqm of living space, is now monitoring 70 rooms in a nursing home in Alsace, France. The system turns on lights when a resident first puts feet on the floor and calls to the nurses’ station when it detects a fall.

“In the first four months, we had 28 falls discovered by our system and none were false alarms,” Steinhage says. “One nurse told us that she wouldn’t have seen one of the falls because the person fell on the far side of the bed where she wouldn’t have been discovered.”

This post originally published on Txchnologist. Txchnologist is a digital magazine presented by GE that explores the wider world of science, technology and innovation.