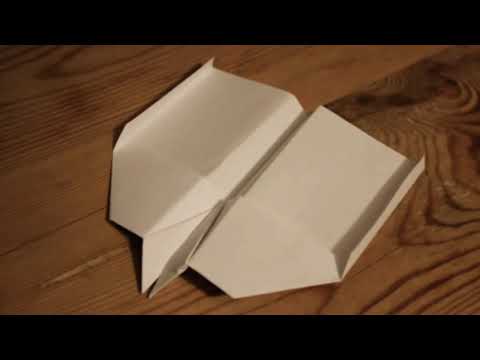 
The guys who claim this is possible explain it:

The principal behind this video is called dynamic soaring.

Dynamic soaring is a flying technique used to gain energy by repeatedly crossing the boundary between air masses of significantly different velocity. Such zones of high wind gradient are generally found close to obstacles and close to the surface, so the technique is mainly of use to birds and operators of radio-controlled gliders, but glider pilots have occasionally been able to soar dynamically in meteorological wind shears at higher altitudes. The highest speeds reported are by radio controlled gliders at over 498 mph 801 km/h.

In our Video the black chair acts as a slope and the wind is produced by the hair dryer.

If you want to replicate the scene your hair dryer should have a power of min. 1200 Watt, your paperplane must be trimmed correctly, the position where to throw the paperplane is crucial. It Tokk me about 50 tries to make it.

Anyone want to try it?