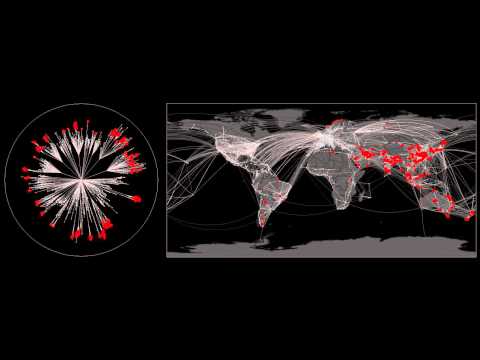 If you want to put on a surgical mask, rubber gloves, goggles, ear muffs and trap yourself in a plastic bubble after watching this terrifying video of how fast an epidemic would spread across the world, well, I’d totally understand. Because it’s crazy fast. Using the world’s air transportation network, theoretical physicists have created a model showing how a disease originating from one city can taint the entire world.

Theoretical physicist Dirk Brockmann and his team created a simulation using a hypothetical epidemic that had similar characteristics to the 2009 swine flu pandemic within the context of our globalized world.

The concept behind the simulation is relatively simple: even though some cities might be closer to each other in distance (say London and a small UK town), people would travel there less frequently than cities that are much farther away (say London and New York). So it’s more likely that disease would spread through the air transportation network than it would with roads, ships and so forth. Or at least, a lot more quickly.

After watching the video and shuddering with fear, you can read more about Brockmann’s study here and at Fast Company.

SPLOID is a new blog about awesome stuff. Join us in Facebook.