Why Is This Giant Ice Disk Spinning Like A Turntable In North Dakota? 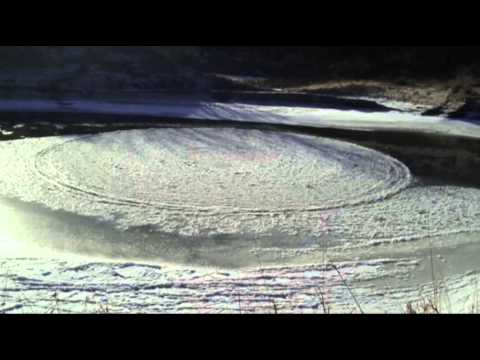 George Loegering found this weird ice disk spinning in the Sheyenne River, in North Dakota, and he couldn’t imagine why and how it formed. Talking to the Associated Press, National Weather Service hydrologist Allen Schlag gave an explanation.

It’s not a continuous sheet of ice. If you were to throw a grapefruit-size rock on it, it would go through. It’s not a solid piece of ice — it’s a collection of ice cubes. I’m not sure how long it was there […] It had to be quite a long time. If you look at the picture, you can see growth rings on the disk.

Schlag says that the very cold dense air of last Saturday produced floating bits of ice instead of freezing that part of the river because the water was still warm. Then, those pieces of ice got caught in the calm whirlpool and they started to line up making it grow as the formation kept spinning.